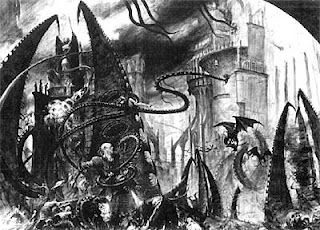 This week I thought I would showcase part 1 of the Tyranid Spires terrain that I have been working on for a good part of the past month. This portion of the project was much more difficult than the other terrain pieces since I was working with new material and did not know what to expect. I will be breaking up the project into two part, this week focusing on the initial stages of development and next week I'll wrap it up with the final results. This weekend is also the Da Boyz GT primer being held at Millennium Games and Hobby so I plan on bringing the full set of the Tyranid terrain and see how it holds up before next months GT.

During the later stages of a Tyranid infestation, huge Tyranid spires erupt from the ground, breaking and tearing through large buildings and structures. Ever since I conceptualized working on Tyranid terrain I knew I wanted to create something that looked utterly alien erupting from the ground but I did not know the best route to start the project or what materials to use.

After much wandering around various hobby and craft stores I settled on florist/plant foam (from here on out I'll refer to it as green foam) as it looked easy to work with and comes in brick shaped blocks. If I were to use pink foam I'd be forced to glue multiple layers together to achieve the desired thickness and if I went with white packing foam I could not think of an easy way to shape the material so green foam would be my material of choice for this project. While green foam comes in an ideal shape and is easy to work with, the downside is that it is very fragile and any little bump, scratch, or even squeezing it too tight will damage the foam so I had to be careful with it while I was shaping the material.

For the first step I shaved out the foam in the shape of a curving horn. 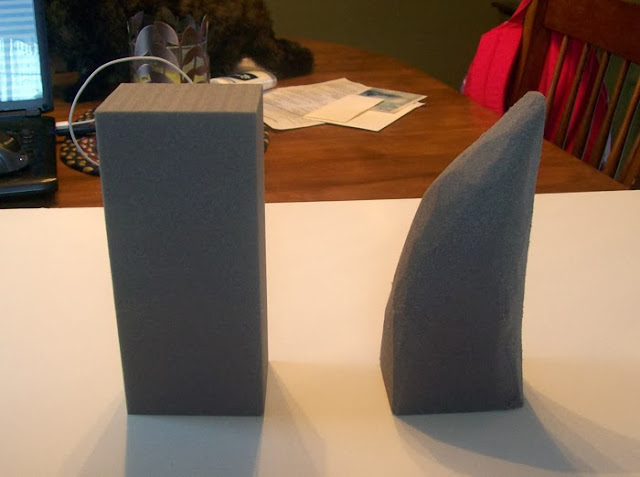 I cut out the shapes in various sizes so I could represent the different stages of growth. 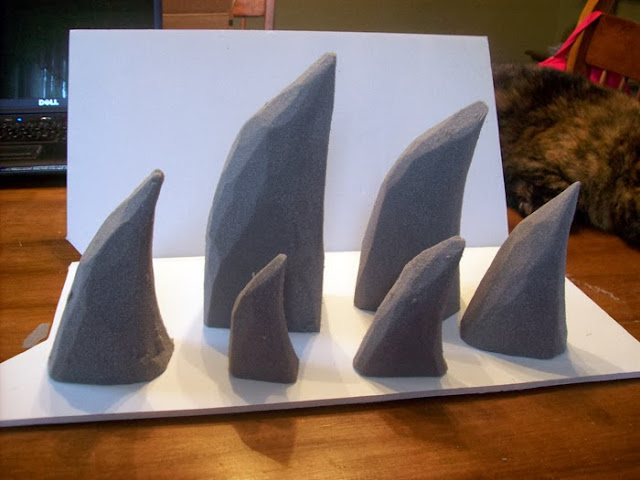 My original thought at this point is that I would carve out the chitinous plates along the back of the spire directly in the foam. This would alleviate any tedious work of finding a material to place over the foam but the end result looked to manufactured and "neat" to represent an organic form. 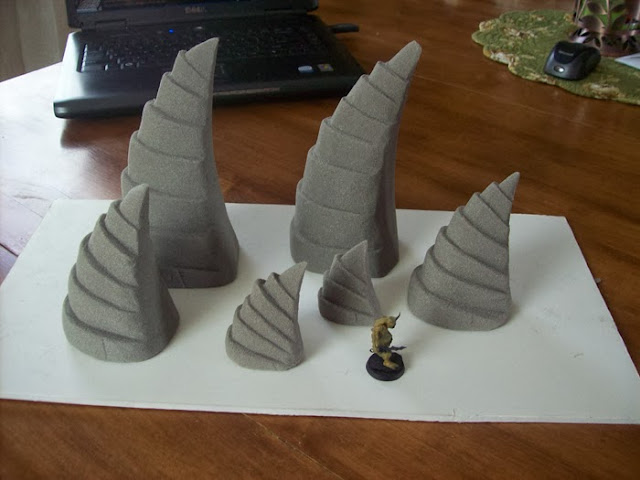 But after looking at the shape I knew that this would not work, plus I did not know how I would protect the foam from the abuse terrain usually takes on the table top.

So after much searching and testing I decide to fall back on my favorite terrain medium. Das Clay. 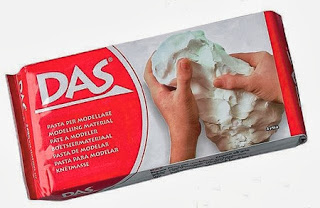 Before I could work the clay into the project I needed to revise the spires so I shaved off the layered plates. 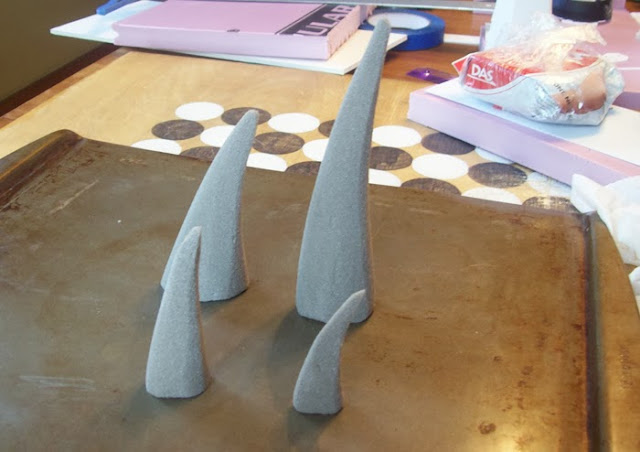 Once that was done I rolled out sections of the wet clay into 1/4" sheets and cut out pentagonal shapes in various sizes. While the clay was wet I draped it over the spires in layers, staring with the smallest pieces up at the top and the largest ones at the bottom so that it would dry into the shape of the spire.

Once the clay dried I was able to pull it off of the spire and started shaping it with a dremel tool. 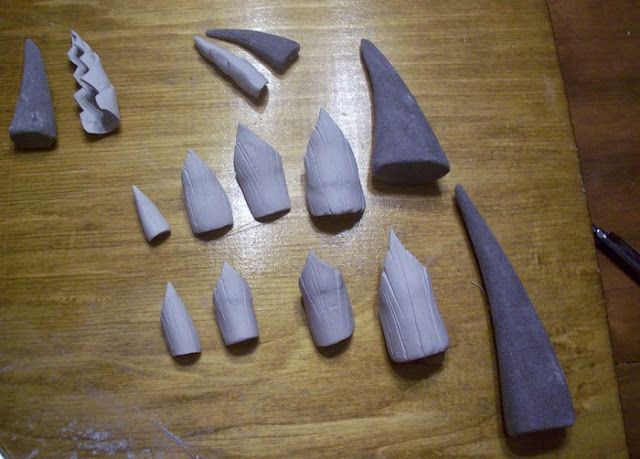 In the above image you can see I fleshed out the points and carved grooves into the plates.

In the next picture you can see how easily the clay pieces fit back into place once I finished cleaning them up. The two smaller ones have yet to be cleaned so you can see the difference. 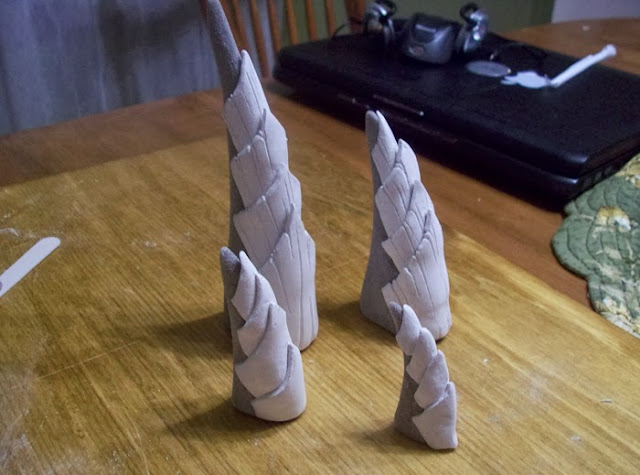 After all of the clay pieces were shaped and in place I needed to do something about the exposed foam. Knowing how fragile the green foam is I knew that even just trying to transport the terrain from various locations would ding the foam up, not to mention the wear and tear it would suffer during games so I opted to use the tried and true white glue/super glue method that I used in my other tyranid projects.

After the initial coat of the glue mix had dried I added a second layer to increase the alien looking effect and once the glues had hardened it created a tough exterior shell that should protect the foam from almost all wear and tear. 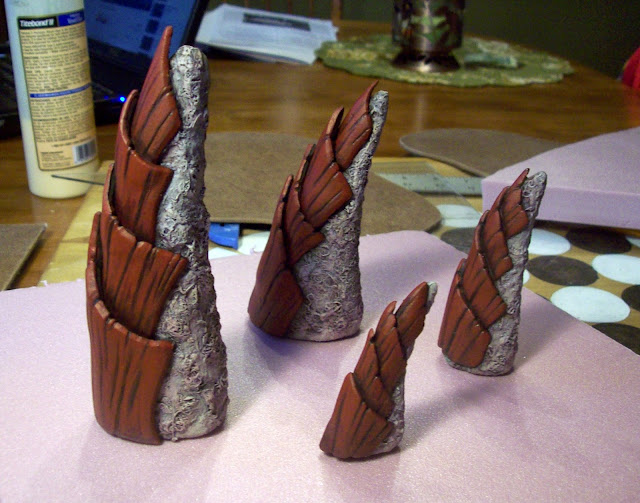 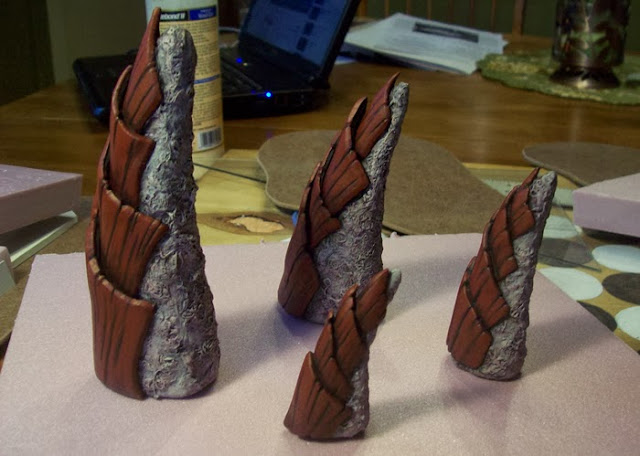 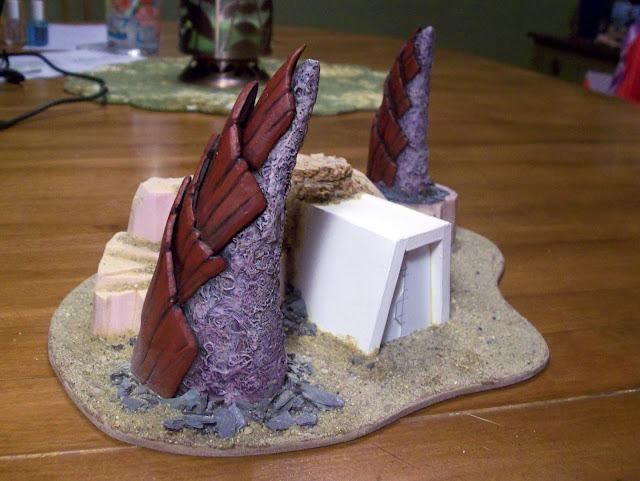 As many of you know, during August's monthly tournament at Millennium Games I ran a trial version of my Tau GT list to see how it would work and I ended up with 1 win and 2 losses. Overall I liked the list that I ran but for this month I opted to drop the devil fish and upgrade my commander, fire warriors and pathfinders. So the list I plan on running this weekend will look like this:

What I changed:
I opted to give the commander the Puretide chip as I know many players will be fielding Wraith Knights and other monstrous goodies so putting him with some Broadsides made sense. So between the TL high yield missiles and re-rolling wounds with monster hunter I should hopefully do some damage. Plus having the option to make the broadsides Tank Hunters will help against those pesky wave serpents and flyers.

I added bonding knives to fire warriors so that if they do break I can still attempt to rally them before they flee.

With the Pathfinders I added in a shas'ui to each unit and bumped their unit size up to 7 each. The higher leadership should hopefully keep them on the field a little longer.

Next week I'll conclude the Spire project and have images of the final project plus images and feedback on how I did at the tournament.