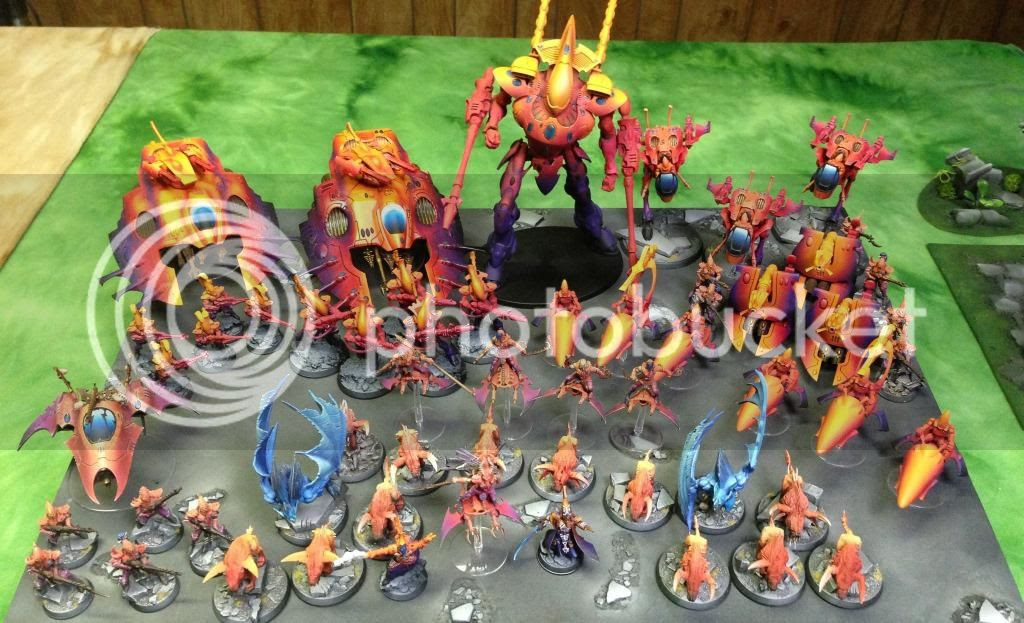 This month's local tournament at Millennium Games was the "DaBoyz GT Primer" and last normal tournament before the GT in November and then the championship invitational in December.  I brought the same army list I've been playing without any changes.  I really like the way it plays and due to the rapidly approaching GT, I didn't want to make any changes that would throw off my painting agenda.


Since this was the GT primer, we used missions from the GT packet.  Game #1 had 4 crusade objectives as the primary (20 battle points) with kill points as the secondary (10 battle points) and the standard bonus points for linebreaker, warlord, and first blood (1 battle point each) making each game worth 33 battle points max.  Deployment for this mission was Dawn of War.  My opponent was Evan, who I've played several times over the past months.

My initial thoughts were that I was in a good position as my army generally handles elite armies well.  He can potentially out-score me with the grand strategy and combat squads, but my list forces a lot of saves so he won't have all his scoring units left in the end.  At least that's the plan.  Plus, I rolled really killer powers for facing an elite army with Doom, Misfortune, and Jinx.  Evan's taking the first turn and gives all 3 infantry squads "scout" with TGS.  Night fighting was also in effect. 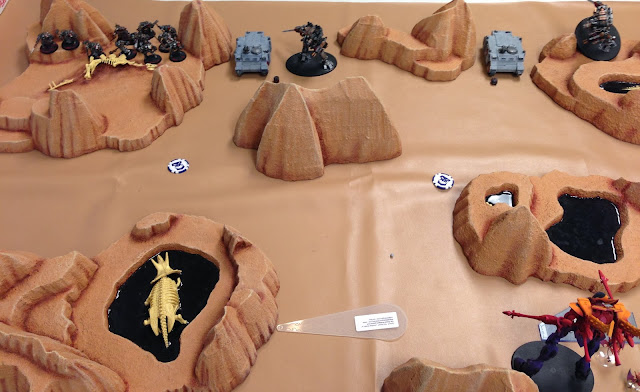 We place the objectives symmetrically with 2 in the middle, one in the back right under the NDK, and the last in the bottom left.  Evan's deployment is easy to read with the picture.  Terminators with the GM on the left, rhino squad, NDK, rhino squad, NDK. 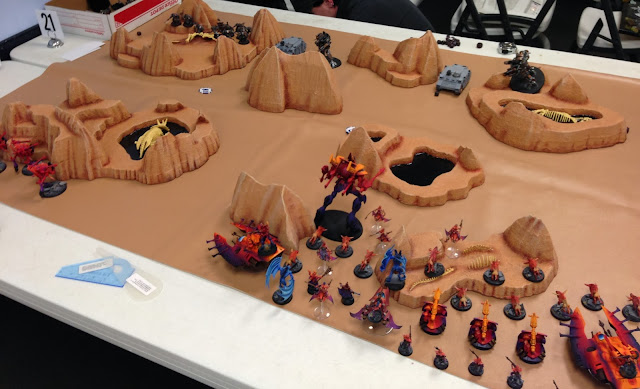 I deploy with a mostly refused flank except for my walkers which went on the left behind a tall BLoS hill.  Wraithguard serpent is central and mostly blocked.  Wraithknight up front with his "shoot me first" sign.  Beasts with all 3 IC's attached in a big screen in case either NDK shunts up in my face right away.  Venom, artillery, and avenger serpent are in the back/bottom right.  Bikes are reserved.  I don't attempt to seize. 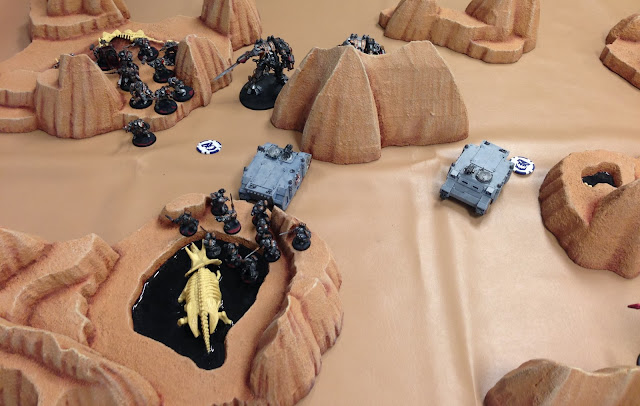 Terminators and both rhino squads scout up.  Then the middle rhino squad disembarks.  Both NDK's jump to the middle, one of which had to shunt to get out of sight.  The disembarked unit fires psycannons at the wraithguard's serpent, but he rolls poorly and fails to penetrate.  The other unit removes a couple models from the beast pack.  Terminators run.

Artillery gets guide and the loaded rhino gets doomed.  I put my wraithknight between the disembarked unit and the central serpent.  Walkers come around for LoS on the disembarked unit.  Beasts, venom, and avenger serpent shift towards the middle.  It takes the WK and avenger serpent to wreck the loaded rhino for first blood.  Walkers, artillery, venom, and wraithguard serpent fire on the unit that disembarked voluntarily and wipe them out. 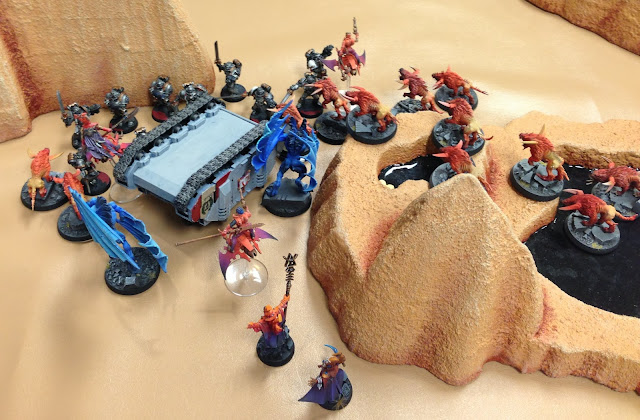 Beasts make their assault into the strike squad who's rhino just got wrecked.  I was pretty spread out so didn't get too many attacks.  Both sides take a couple casualties and we lock. 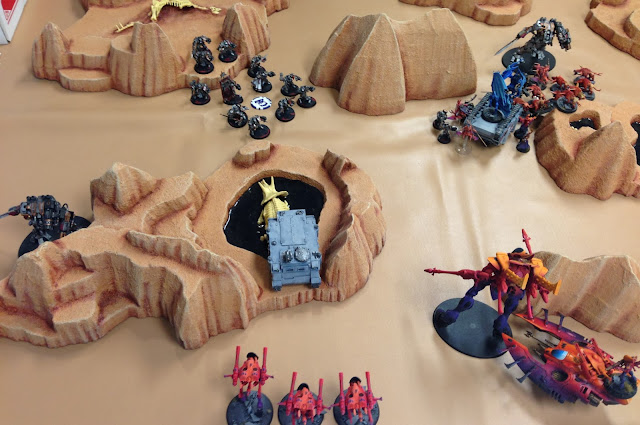 The NDK that shunted last turn jumps towards the beasts.  The other one shunts onto the left side objective.  Terminators huddle around their objective.  The teminators open up with 3 relentless psycannons and str5 storm bolters and wipe out my walkers. 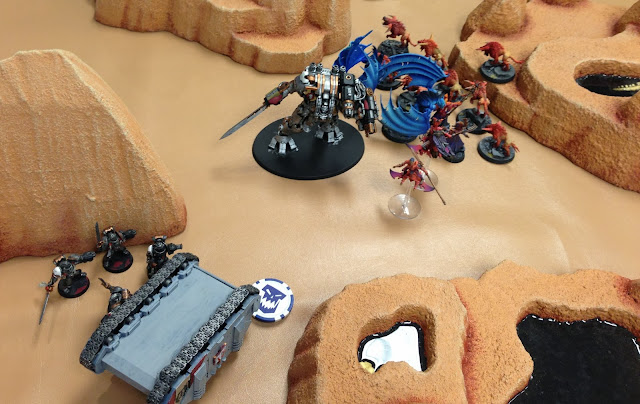 The NDK charges into the ongoing combat.  I knock the strike knights down to 4 models, take a few casualties, and hit-and-run out of there. 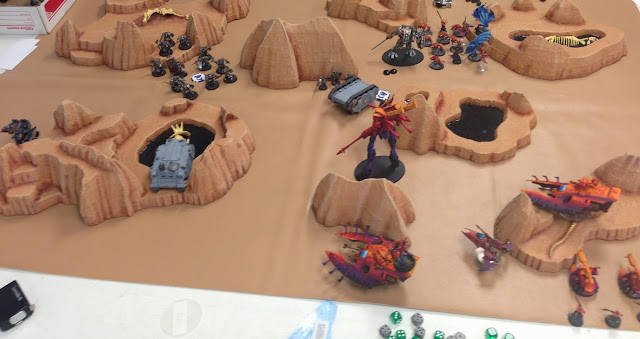 The NDK that just assaulted gets doomed and misforuned, but aegis causes jinx to fail.  My WK jumps to 2 o'clock keeping the other NDK and terminators out of assault range.  The wraithguard serpent wrecks the empty rhino.  WK takes out a terminator.  The avenger serpent puts 7 wounds onto the terminators with the GM now out front.  The GM fails his first 2 saves, fails his lookout sir, and fails his 3rd armor save!  Four 1's in a row give me his warlord. 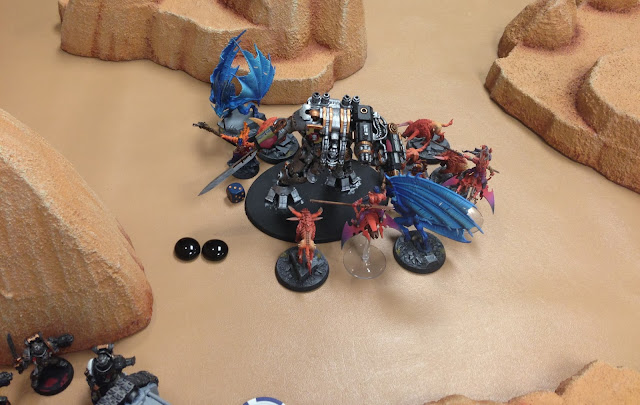 Beasts assault back into the NDK but only cause 3 unsaved wounds despite doom and misfortune. 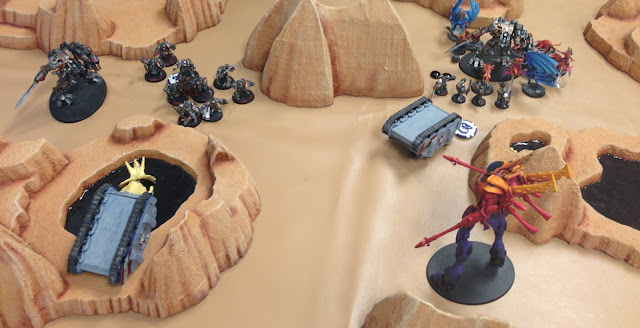 The four remaining strike knights head for the combat.  Terminators and second NDK head for my WK.  I believe the shooting was ineffective.  Strike knights assault my beasts.  He challenges, I decline, 2 strike knights die but I'm unable to finish the NDK.  I hit-and-run out but don't get very far. 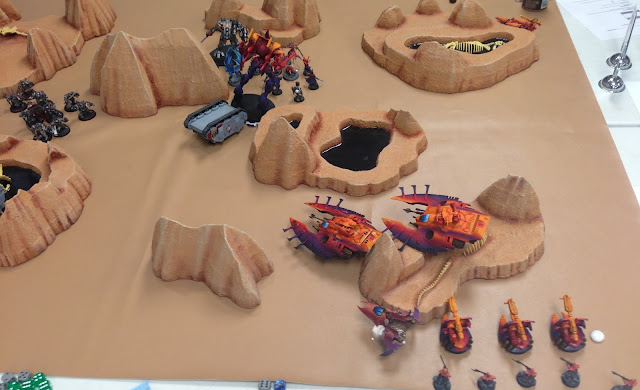 BTW both bike units are in now.  One is hiding on the upper right objective, the other near the bottom left obective behind the BLoS wall.  The NDK blocks all my maledictions this turn.  I jump the WK up to help.  My 3 loaded transports pull away from psycannon range.  Artillery snipe out one of the psycannon terminators and he loses a couple more to serpent shields, scatter lasers, and splinter cannons.  My WK tries to score the last wound on the NDK but fails.  Now I must assault it again with beasts, leaving the 3 remaining strike knights unharmed.  I finally down the wounded NDK in assault. 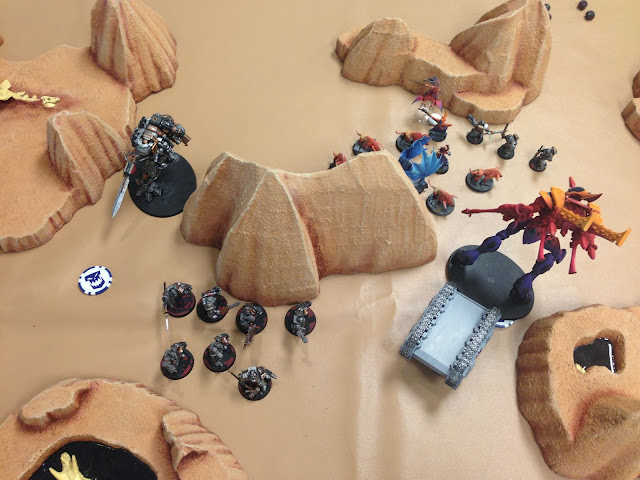 Evan only has 3 units left and they're all converging in this picture.  The NDK and strike knights inflict heavy casualties on the beast pack leaving 2 khymerae, the baron, and farseer.  Terminators make their assault move into the WK, get a hammer wound, and bring it down with the banner.  Strike knights assault beasts, I kill 1, and then hit-and-run out again. 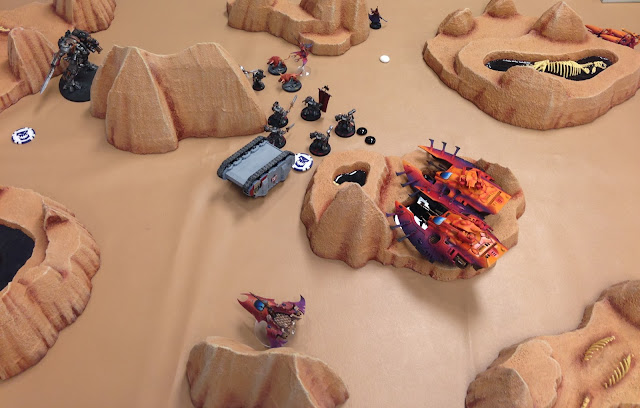 Terminators get misfortune and doom.  I break off my farseer and run him behind terrain to protect my warlord.  All of my combined firepower takes out the terminators.  The baron and his 2 dogs assault the strike knights and I can only kill 1. 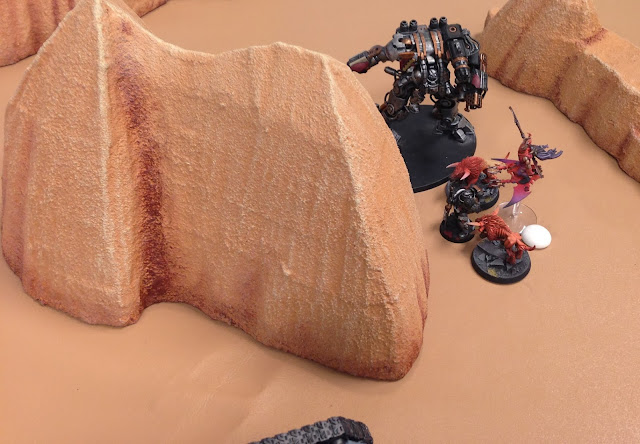 Only 2 GK models left...  The NDK assaults in.  The baron kills the last strike knight and then I lose all 3 models to the NDK. 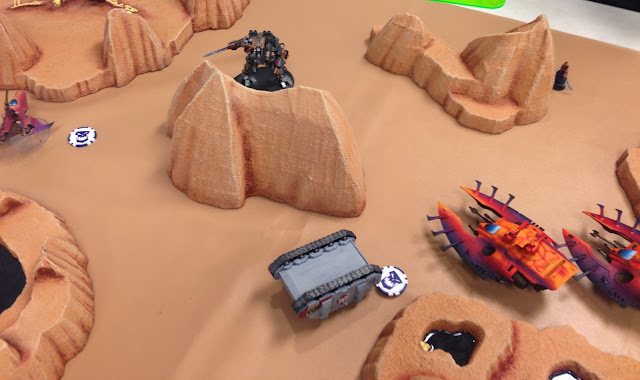 Everything that can shoot aims for the last NDK.  My bikes secure 2 objectives.  Evan fails enough saves on the NDK and the game ends with no GK model left on the field.

The GT packet instructs us to play out a game even after tabling so we go over the math.  I've got objectives 2-0.  Evan's list contained 8kp and he claimed 5 from me (walkers, WK, beasts, baron, spiritseer).  I also had first blood, warlord, and linebreaker for 33/33 battle points!

This game was a pretty straight forward slugfest.  I'm pretty confident against small elite armies and this was no different than expected.  A 35 model list like this just doesn't match up well against mine.  He had the potential to alpha-strike me with his TGS/scout move + shooting, but getting to counter deploy with plenty of BLoS terrain nullified that, and I got lucky against the initial psycannon volley.  It also didn't help that he rolled four consecutive 1's to give me his warlord.  Either way, it was an entertaining game and great start to this tournament both with points and practice.
at 8:00 AM