I'm in full panic mode trying to paint every chance I get.  4 weeks is definitely enough time to finish painting the army, but I'm not sure if I can make 2 more tables, a new display board, and flickering smoke plumes.  Oh, and I'm still trying to fit in practice games both at 1850 and 2000 for the GT and Team Event.

Anyways, on to the models.  This week was henchmen week.  I had to mix it up because I was getting bored of the power armor.  Next week may be transports heh.  Sorry, these don't all have bases yet as I do those in batches. 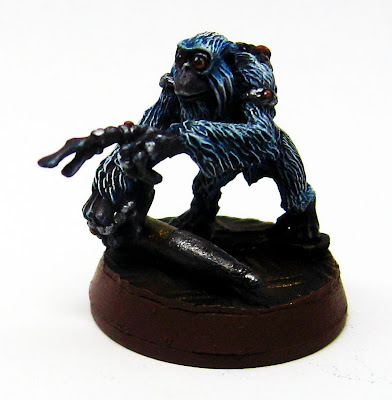 Posted by hyv3mynd
From Evan:

"I've been following your blog for a bit and I wanted to get your thoughts on the results for the 'Ard boyz semi-finals. From whats been reports, roughly 60% of stores or so, Grey knights have 25 armies that place in the top 3 with guard getting 13 and space wolves getting 9. From most of the talk its seems Grey knights are winning either through the strong lists or that the codex is still new enough that not enough players haven developed effective counters to them. unless I'm mistaken one of your own local stores had a semi final location and I wanted to get your opinion on the following:

What do you think about the Grey Knights dominating the field?
Do you think the power has shifted to Grey knights from space wolves and guard?
How did your local tourney turn out, if you were there? I've heard you have a few solid players with Grey knights so I assume they made a showing at the top 3.
Based off what happened at the semi's, would you say it was skilled/cunning players or those with the most powerful armies that got to the top, as I can guess from your battle reports there are some very strong armies in your area ( Nasty Drop dread BA, Lash+oblit Chaos, Mech Guard). I know you have several big names in the area with 2 ETC members, maybe you could give a rundown of what kind of players won your locations placing, such as what kind of skill level they are, were they playing broken lists, did they get lucky dice/match up, what their semi finals mass/major/minor records were etc.
P.S. I know you're busy prepping for a GT, so if you wanted to make a blog update based on this subject that might make decent filler content.
Thanks, Look forward to hearing your thoughts"
read more...
at 1:41 PM 2 comments:

Yes, it Hurts (so bad it gets deleted). 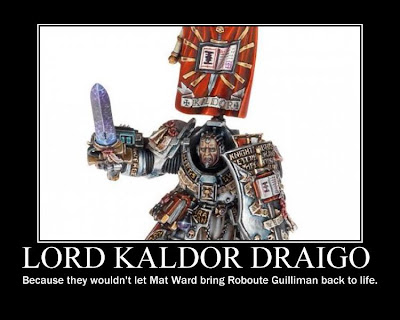 There are 100 titles I could give this article and none would cover all the bases with just a few words.  I'm writing this all down for several reasons.

The first is that a lot has happened in the 40k community this summer.  People are figuring out Grey Knights and tournament representation has peaked as the "flavor of the month" army.  'Ardboyz and NOVA featured this new codex performing quite well in the competitive community and the aftermath has seen many forums and blogs inundated with heated debates, bitter whining, flame wars, and drama.

The second reason is with 4 weeks left until DaBoyz GT 2011 (click it!), I've switched over from painting individual models to batch painting, and I won't have many new pictures to share of my work on the new army.  No new pictures and no new content gives me big time lazy blogger guilt.  I do appreciate those that still stop by to check the blog in this content drought, and this article has applications to both Tyranid and Grey Knight armies. 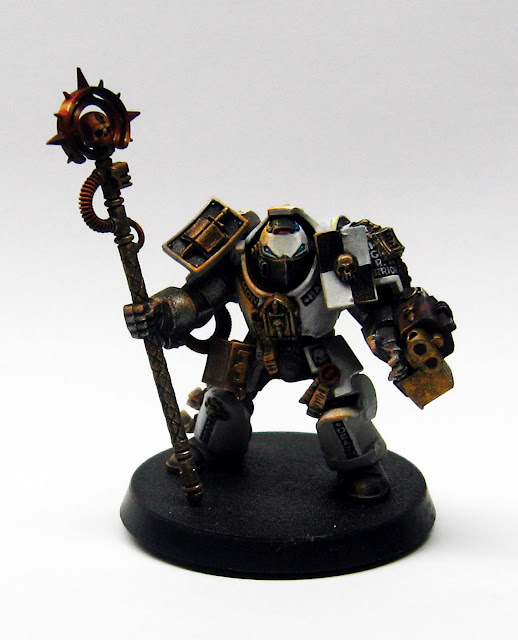 Let me start off by apologizing for a lack of updates.  As we get closer to DaBoyz GT, things just keep getting crazier and crazier.  On top of a shrinking timeline, last week I got the flu for the first time in 5 years, Millennium Games hosted DaBoyz GT Primer, and this week they're hosting a Kill Team lock-in tournament.  I lost a couple painting days when I had the flu so now I'm trying to squeeze 7 hours of painting into each day around work and my pregnant wife. 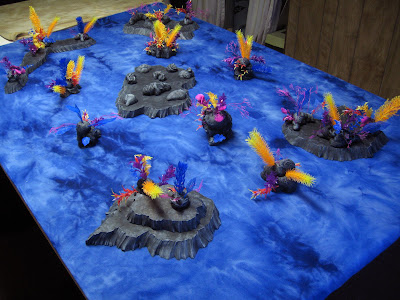 My judgement was obviously compromised when I told the guys I could supply 6 tables at our GT this year, along with assembling and painting a new GK army in less than 5 months.  Those of you who know me well know I love every aspect of the hobby from painting to converting, basing, building terrain, and writing scenarios.  Some people have army a.d.d., but my attention issues encompass all aspects of the hobby.  Some days I feel like painting, then I need a break and build some terrain, then I build lists and write for the blog.

This week I was inspired to build terrain.  We've been hitting up the pet stores and hobby shops that have been advertising sales and sending us coupons, so I've built up enough supplies to make 4 new tables.  If you've been reading long, you're familiar with my snow and jungle tables.

Here's the thing about me and terrain.  I want it to look nice while being cheapish to build and functional to play on.  No, I don't have the cash to buy 6-8 boxes of GW ruins at $25 a pop.  There's enough ruined cities out there anyways.  I prefer to create alien planets for my battlescapes.  You know by now my armies are painted with unusual schemes and I like my tables to be unique too.  In the grim dark of the 41st millennium, there is only war, but all wars aren't fought on the same planets and same battlefields every time.  I want my armies to experience the sights and scenes of the planets they conquer.

Well... this was one of those "good news, bad news" weeks.

The good news:  We're having a boy!
The bad news:  "Honey, the washing machine is broken and I need to do 4 loads of laundry!"

The good news:  I got a lot of work done on terrain for 2 of the 6 tables I volunteered to provide at this year's GT.
The bad news:  I didn't get as much painting done as I wanted.

Here's what I did accomplish: