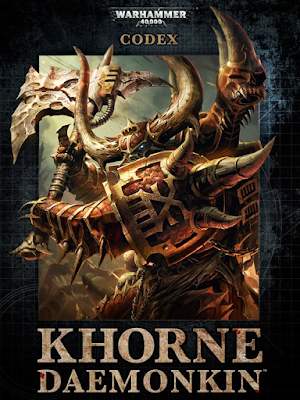 I picked up the Khorne Daemonkin book - a digital copy - right when it came out.  Although I have not traditionally been a Khorne player (says the guy with 36 Flesh Hounds, 2 Skull Cannons, 6 Bloodcrushers and 2 Heralds of Khorne), I really liked the integration I was seeing with CSM.  For those considering the book - I highly recommend it if you are looking for a way to revitalize your CSM and add more depth/flexibility to a Daemon army.  The fluff is a bit redundant - let's be honest, there is not a lot of depth when it comes to Khorne - but there are some cool stories and marking schemes to help differentiate squads.  In this article I plan to cover the special rules in the book, and what makes it different from individual CSM/Daemons.

Before going further, it is important to note that the unit costs of the selections in this book are identical to their core codices with the upgrade to a Mark of Khorne where appropriate.  The additional rules in the book are, therefore, strictly a bonus to the models.  In some cases units have gained some additional rules as well - for example a unit of Warp Talons are not just Daemons, they are Daemons of Khorne which grants them Furious Charge.

The interpretation of the second of these mechanisms has been up for some debate.  Some claim that it applies when a character with that rule is slain - regardless of being in a challenge.  I think the meaning is obvious - it is only in a challenge.  Some may wish to mince words over it - but my interpretation is consistent with the symmetry seen in the first rule and just makes sense from a game mechanics standpoint.

There are eight potential effects for generating Blood Tithe points.  Listed in order (and by cost) they are:

This rule is strong in conjunction with the Collar of Khorne if you are facing a significant number of Witchfires and Maledictions.  Denying on a 3+ helps to mitigate the lack of psychic dice generated by a Khorne army.  Even denying on a 5+ effectively doubles the chance to avert witchfires and maledictions.

In my experience, assault armies usually have one major turn in which their elements close in and have to win a string of assaults to deal crippling damage....or get shot off the board.  Even the hardest assault unit will struggle against Khorne elements backed with both Furious Charge and Rage.  The disadvantage to these is that they go away with a multiassault.  Luckily, these are not rules with a premium built into the models

I think this might be the best bonus out of the bunch.  It is critical to amass enough Blood Tithe points to use it early and on the turn of the assaults to negate any swings back or overwatch.  Even gaining FNP for a single turn makes the  Khorne Daemonkin book.

This is a nice bonus to have - although it is not as strong as 3.  Most Khorne units tend to lose their punch in the second round of combat and an extra attack can be enough to dig them out of those combats so they can charge afresh.

5 - Daemontide; Summon 8 Bloodletters, or 5 Flesh Hounds within 12" of a friendly BBG unit

The overall impact of these summons are less than that of army wide special rules.  However, grabbing some extra objective secured (Hyve3 rightly pointed out that if these are summoned from the Daemonkin then they do not have objective secured) troops, or a sacrificial unit of hounds can be useful.  This effect is less impressive than the others in that Malefic Daemonology can replicate it fairly easily.  It is not bad, but hard to be impressed by it.

6 - Harbingers of Blood and Brass: Summon 3 Bloodcrushers or 1 Skull Cannon within 12" of a BBG unit

Similar to the previous rule - it is hard to get too impressed by this one for the Bloodcrushers.  The Skull Cannon presents a more interesting option.  It is on demand grenades for a unit, it can actually be used on the turn it comes into play and there is not another way to summon a Daemon engine in the game at this point.

A Daemon Prince on demand - following a leadership test - is a nice touch.  This is another that is not replicated elsewhere and a lot of the shortcomings of the CSM variant have been addressed with this one.  I still think the overall effect is less impressive than that of 1-4, but at low point values a Daemon Prince can make a big difference.  One note - the prince can have wings if the model does, but it does not have to have them.  A summoned model must deep strike in, and a FMC has to enter Swooping when it Deep Strikes.  To get an assault out of this DP takes a minimum of 3 turns (DS Turn N, Swoop to Glide in Turn N+1,  Assault Turn N+2).

Similar to the Daemon Prince, this Bloodthirster has a lag on its assault but packs significantly more punch when it does make it into combat.  Given the delay, I still think the other results are superior but at low enough point values a pop-in Bloodthirster can be game breaking.

Skulls for the Skull Throne

Models with this rule must always issue and accept challenges.  Straightforward and with the change to challenge rules that enable wounds to overflow out of the challenge this is less of a disadvantage than it used to be.

The Number of the Counting Shall be Eight

While not officially a rule, the unit counts for troops is set to 8.  The minimum for Bloodletters was previously 10 and CSM 5.  In general this is a benefit for Bloodletters - I seldom see them fielded given their cost nor do I see units of only 5 CSM.  I like the fluff of this choice and it does not hurt the army overall. 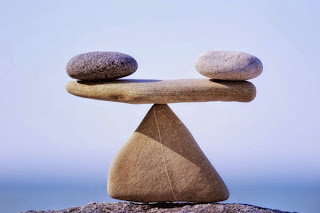 This change for Daemons is huge.  None of the Daemon units in the book have Daemonic Instability and have traded it instead for Fearless.  This is a massive buff for the Daemons, at the minor expense of not being able to go to ground.  An added benefit, a significant one, is that the Khorne Heralds in this book can join CSM units and CSM can join Daemon units.  This makes sense from a fluff standpoint with a particularly devoted servant of Khorne charging ahead of a pack of Daemons or a Daemon showing the way to group of aspiring champions. 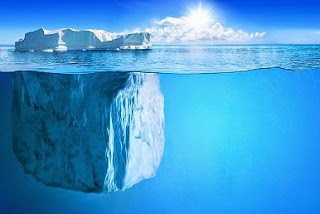 Tip of the Iceberg

Even with a few special rules, the Daemonkin supplement has already distinguished itself from both the Daemons and CSM books.  The Blood Tithe encourages the use of multiple small units who collectively reduce the chance of failed charges, diffuse firepower and make maledictions less effective.  The loss of Daemonic Instability makes it possible to play Daemons in this way and multiple combats can be created by charging first into 3 different units and then using a third to link the assaults without losing the associated charge bonuses.  Finally, CSM and Daemons forces can actually work together by sharing transport vehicles and leveraging Icons more effectively.

This synergy only expands with the Artefacts of Ruin, equipment options, and formations - the topic of my next post on the Khorne Daemonkin.
at 10:42 PM