Posted by hyv3mynd
Here are some newly painted models for my GT army.  If you've missed out on the beginnings of this project, my archive can be found HERE.

Here's my inquisitor, the secret weapon in my tournament list.  Yes, he's WYSIWYG, no you don't get to see my super secret list yet. 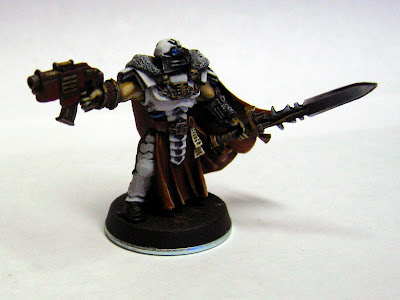 Posted by hyv3mynd
From Jacob:

"Hello Hyv3mynd!! hey I really love your battle reports really gives me some hope for my tyranids, now recently I've been painting a few of my models as hive fleet kraken, but I wanted a more natural look to them and recently watching Starship troopers at the girlfriends house I really liked the look of the of the flying scarab bugs and I realized thats exactly how yours are painted which I really dig, hope you dont mind me stealing your paint scheme haha, well last night I attempted to paint a Termagaunt in your color scheme, but I dont know if I pulled it off right, would you mind telling me how you did it?"

I was just wondering how you achieved the metallic tint to your
miniatures specifically the green areas of the carapace?

Thanks for your time."

I've never taken the time to do a painting tutorial, so here's my chance.

Posted by hyv3mynd
This was my first practice game with my final ATC list.  I played Shaun, our team captain (also on America's ETC team) and his new Ork army.  We played this game way back on May 1st and I had just finalized my list for the event so I could finish painting the models over the next 3 weeks.

Tyrant Guard x3 + whips
Tervigon + ts, ag, cat
Hive Guard x3
Hive Guard x3
Genestealers x19
Genestealers x19
Tervigon + ts, ag, cat
Termagants x10
Tyrannofex + rc, cs, desiccator
We played an ATC format game which included 2 cap'n'contol objectives, 3 seize ground objectives, and kill points.  I pretty much went into this expecting to lose.  Shaun has been playing 10 years longer than I, and I know he's won several GT's over the years and regularly goes to the Ard Boyz semi's.  Orks are also a tough match for Nids in my opinion, often with more bodies on the field and a hidden klaw in every unit.  Ghazkull can also be one of the most difficult characters for us to deal with.  With fleet and a 2+ invuln for two assault phases, he will almost always kill whatever he hits.
read more...
at 1:47 PM 2 comments:

Posted by hyv3mynd
Here's another game from my unreported archive of battles leading up to the ATC.  This was a practice match vs Kevin's awesomely painted Word Bearers.  This report will have more pics then my recent batreps as we played at my place and didn't have to beat any time limits or finish before the store closed.

Posted by hyv3mynd
A quick update with some models I've been working on.  No bases yes as I'm still trying to figure out what I want to do with them.  Any advice is welcome.  I want them to look like urban rubble and I picked up some GW ruins to use.  The problem is the collection of ruins I've started to make a full table is stone/marble and the colors are very close to the whites and greys in my marines.  I'd like a little contrast from the colors in the marines to the colors on the bases. 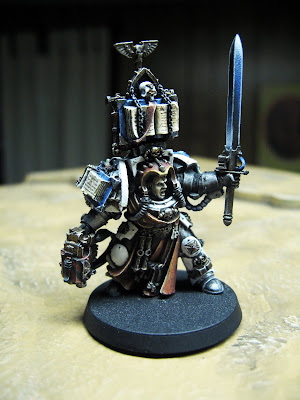 I kept the black, white, and silver scheme of my other marines and terminator for this guy.  My justicars have blue cloth so I made the librarian's red.  My normal marines have red weapons so I made his sword blue.  Now he stands out well from the other terminators with the opposing colors.  This is a finecast model with hands swapped to change his standard staff with a force sword from the strike sprue. 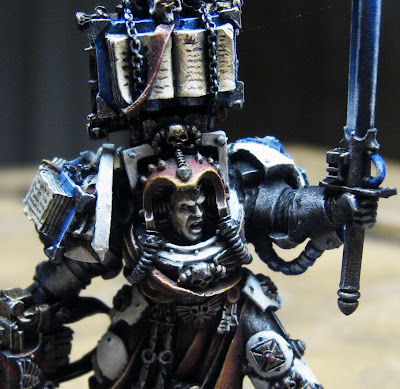 Some details.  Check out the gem on the knee, man I'm proud of that haha!.  All the books and purity seals have freehand script also.

Posted by hyv3mynd
With two solid wins under my belt, I head to table 1 to face Mike from Buffalo.  The mission was pitched battle with 5 objectives.  Mike's list:

This was a real nasty list and I think he nearly tabled everyone he's played so far.  I knew I had to stop the furioso with talons as it can pretty much kill everything in my army with some average rolling.  Everything else, including Meph, was going to be secondary.  The other aspect that makes this list nasty is forcing me into a reactionary stance.  His mobility, shooting, and potentially assault components can best me if applied right so I know this is going to be real tough.

Posted by hyv3mynd
This will be my first venture away from Nids since coming back to 40k in the spring of 2010.  I needed to mix things up a bit after a solid year of focusing on Nids and a series of intense tournaments with them.  A friend also personally requested that I build a small army and feature it on the blog to help promote DaBoyz GT 2011.  This is our premier local event here in Rochester, NY.  They've been running this for 5 years or so, and has grown considerably in attendance, bringing in 90 players for the 40k event alone.  We also feature some of the best terrain in the tournament circuit which can be seen HERE and in my 2010 GT Batreps.

This has been a comp event and will continue to be this year.  That combined with Chris's ATC performance where he took Best General with no spam, really inspired me to build a comp-friendly Grey Knight army.  With 3 months to go until the GT, I'm painting like a mad man already.  I really want this army to pull in a lot of painting points.  Not to worry though, I'm still getting games in with the Nids and will take them to the 'Ardboyz prelims this year.  The GK articles will only punctuate my regular Nid batreps and articles. 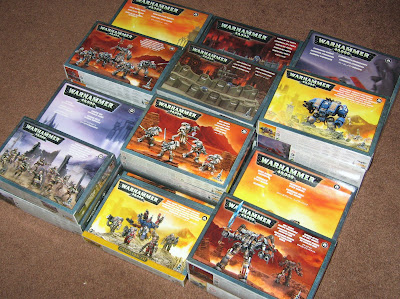 ... The complete 1850 army with a couple terrain boxes for conversions and basing.  I also grabbed a couple blisters for odds and ends.  This is a picture I took today, but I've actually been playing GK on and off since I returned from the ATC in May.  Our team won several prizes, so I grabbed a Dreadknight there.  I threw down enough to play in a 1250pt event and 1000pt event (used the same models) and took 1st and 3rd in those events.  I rolled the winnings over into more models and with some generous donations from a sponsor, I had enough assembled to play an 1850 list suitable for a comp tournament!

Posted by hyv3mynd
After a solid win in round #1, I was interested to see who my next opponent would be.  Most of our regular heavy-hitters were absent from this event and there were several news faces to me.  I ended up against someone new who drove in from Buffalo or Erie, I can't remember.  His list was a "Rock" list, which typically don't frighten me, but he's got 2 land raiders which can be tough for Nids.

Posted by hyv3mynd
From Matthew:


"Hey Hyv3mynd,
I’ve been following your blog since I’ve started playing Warhammer (3 months ago) and it has been a good source of information
After a post that I read on 3++ about Mathhammer I decided I would whip up an excel sheet for Tyranids based on the same options, i.e. Dead marines by shooting (although you can input your own WS, T and Sv).  It took me a few hours, but I think I’ve come up with every possible weapon and biomorph combination (where they will change the results) and how many dead/destroyed per model.
I know you’re more of the feeling that you should play it yourself rather than rely on statistics, so do you have any interest in helping me test this out?  It’s non-macro excel based.
Anyway, let me know,
Nameless"

Posted by hyv3mynd
Still tapping into my stash of batreps from my ATC preparations.  This tournament was Millennium's monthly even in May.  Travis agreed to bump the points up from 1850 to 2000 so the five of us going down to Tennessee for the ATC the following week would have one last chance to practice.
My list (same as ATC):