Posted by hyv3mynd
This was my first practice game with my final ATC list.  I played Shaun, our team captain (also on America's ETC team) and his new Ork army.  We played this game way back on May 1st and I had just finalized my list for the event so I could finish painting the models over the next 3 weeks.

Tyrant Guard x3 + whips
Tervigon + ts, ag, cat
Hive Guard x3
Hive Guard x3
Genestealers x19
Genestealers x19
Tervigon + ts, ag, cat
Termagants x10
Tyrannofex + rc, cs, desiccator
We played an ATC format game which included 2 cap'n'contol objectives, 3 seize ground objectives, and kill points.  I pretty much went into this expecting to lose.  Shaun has been playing 10 years longer than I, and I know he's won several GT's over the years and regularly goes to the Ard Boyz semi's.  Orks are also a tough match for Nids in my opinion, often with more bodies on the field and a hidden klaw in every unit.  Ghazkull can also be one of the most difficult characters for us to deal with.  With fleet and a 2+ invuln for two assault phases, he will almost always kill whatever he hits.
We rolled up DoW deployment and I won first turn.  I deployed my tyrant at midfield behind terrain and my troop tervigon in between two objectives a few inches from midfield. 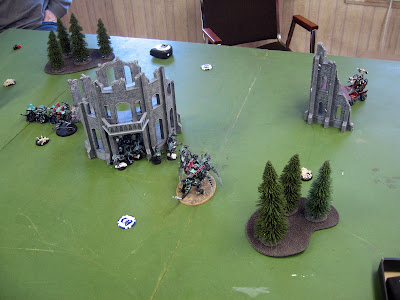 Shaun put Ghaz in the trukk with the manz 18" away from my tervigon.  Man, he better not seize!  I see my error and I infiltrate one unit of genestealers in the central ruin and in place to screen my tervigon if I do keep first turn.  Shaun is outflanking his kommandos and I'm walking everything on.  Even with the option of outflanking my genestealers, I know Shaun is going to push hard and fast into my half with Ghaz, so I'd rather have my second unit of genestealers in place to counter.  Shaun fails to seize.
I begin by spawning a unit of 6 gaunts and burning out my troop tervigon.  I send them to intercept Ghaz's trukk and shift my genestealers over to also screen the tervigon.  Everything else walks on. 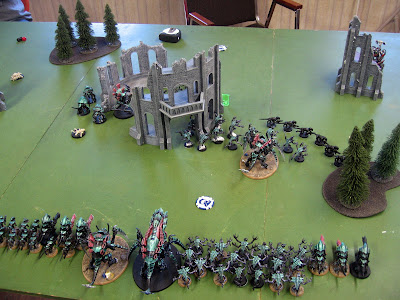 I'm 99% sure Shaun is going to drive Ghaz right into my wall so I bring my second unit of genestealers up right behind the tervigon.  Everything runs.
Shaun brings on the tide! 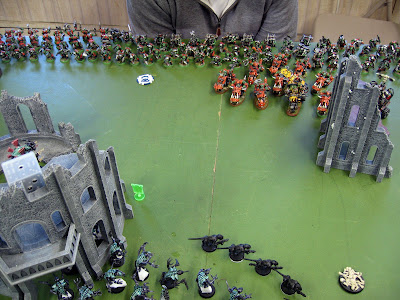 As I suspected, the trukk blitzes up and unloads the manz. 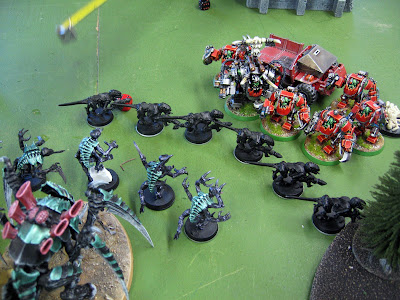 I did a pretty good job with my bubble wrap so his only chance to get a multi-assault is shoot the gaunts and not kill them all, but leave a gap to get the genestealers.  Unfortunately, his shooting kills all the gaunts and leaves him in the open.
I spawn 9 gaunts in the middle (no dubs) and move up the masses.  I pull the front genestealers over and decide to commit the tervigon to the melee.  At least she's a poisoned MC that should be able to knock over a nob right?  Genestealers and my tyrant get FnP with the troop tervigon taking a perils. 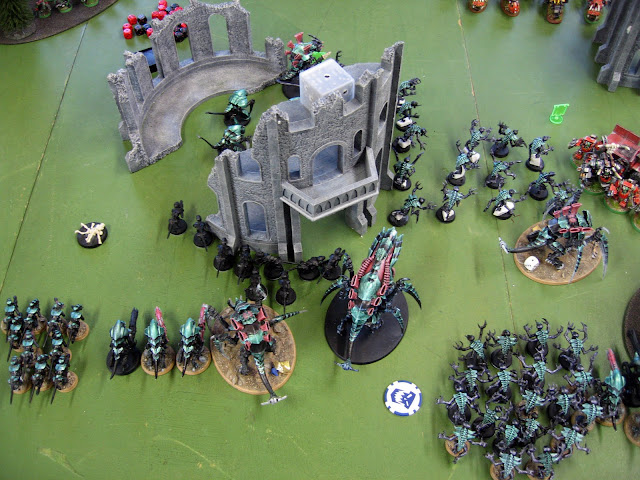 Hive guard ramshackle/wreck the trukk, genestealers get a good fleet and set up an epic assault.  Tyrant kills a couple boyz, everything else runs. 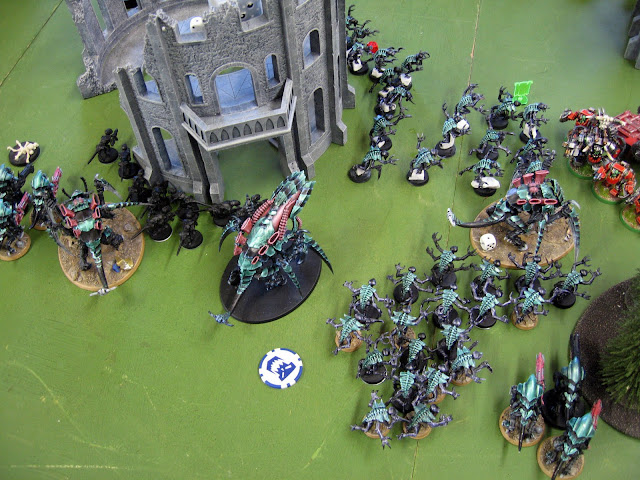 I send everything in.  The sucky thing is I lined up the rear unit to assault in perfectly without having to move through terrain in a passive assault formation, but am only able to get 5 from that unit able to swing.  The back unit is lacking some punch also as they got hung up in the ruins with a bad terrain roll. 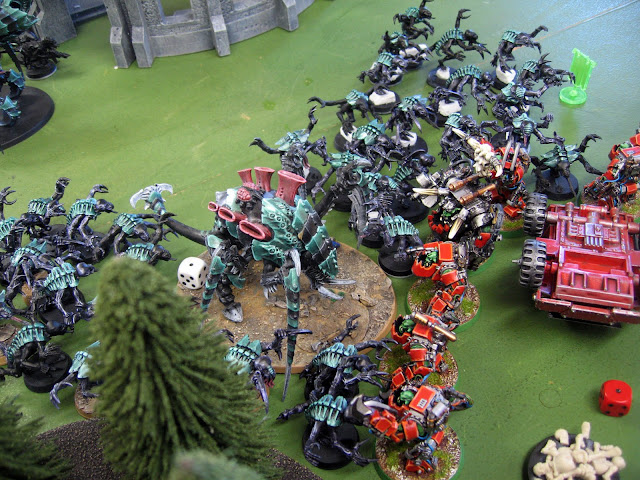 Most of my swarm wiffs here and after all those attacks, I've killed 2 nobz.  He swings back, putting 3 wounds on the tervigon and kills a bunch of my genestealers.  Shaun wins combat and my tervigon fails her armor saves and dies.  My perfectly executed bubble wrap/counter assault maneuver with 38 genestealers got shut down and we lock.
Shaun turbo-boosts over his bikes in position to provide another counter and brings up a unit of boyz. 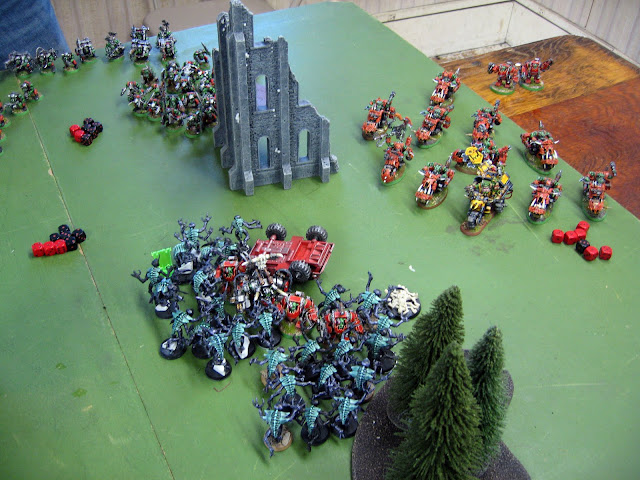 In the center, he brings up 2 units of boyz. 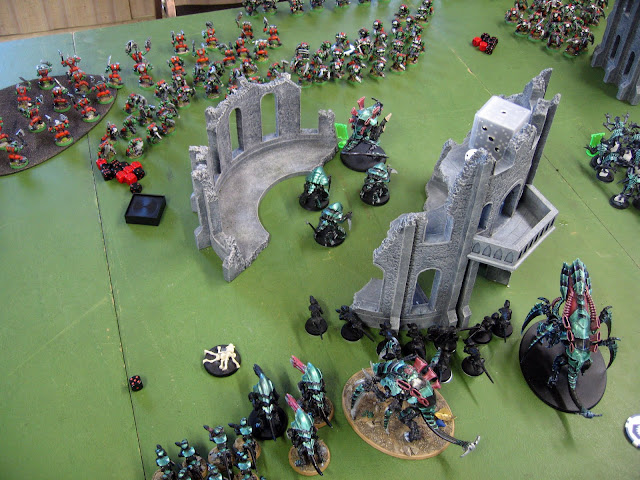 His lootas put a wound on my only tervigon.  He declares his WAAAAAGGHH!  My genestealers take on another 25 boyz. 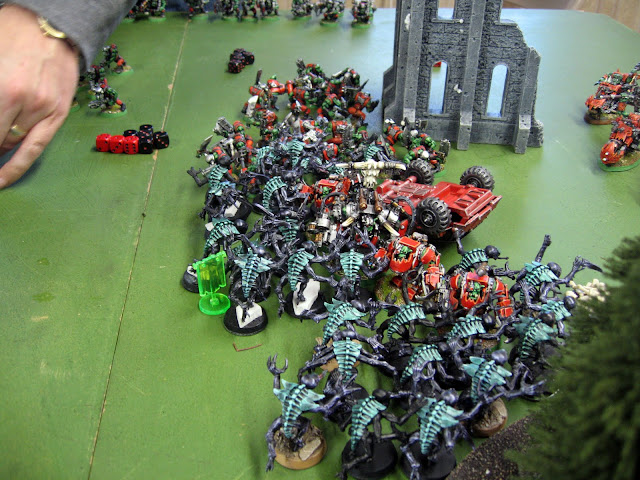 I kill a few boyz, 2 more nobz, and then get murdered.  My top unit gets knocked down to 4, out of synapse , who break and run.  The bottom unit stays and locks with Ghaz. 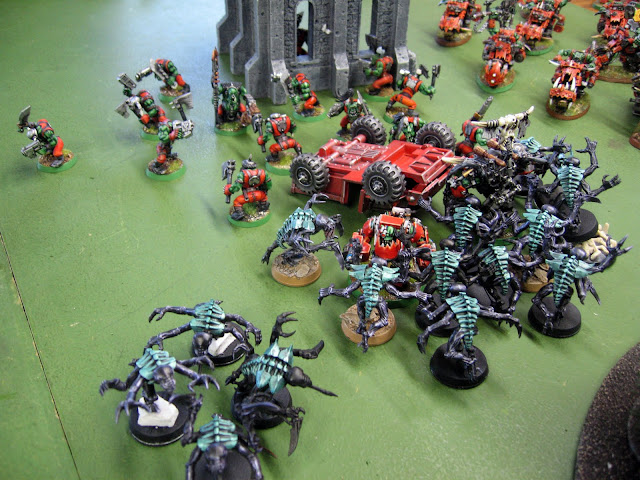 In the center, my tyrant unit (with FnP) faces off against 50 orks. 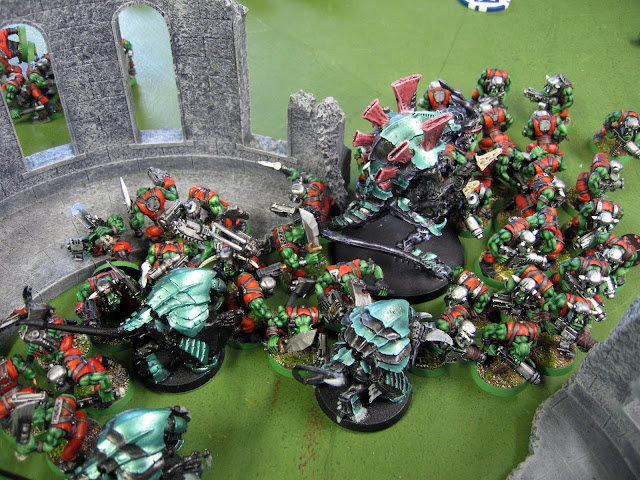 Preferred enemy and high strength prevail and I smash a bunch of the orks.  His power klaw nobs only cause a couple wounds, I win combat, and Shaun loses more orks to no retreat wounds.
My fleeing genestealers rally and I send my gaunts in to save the tyrant. 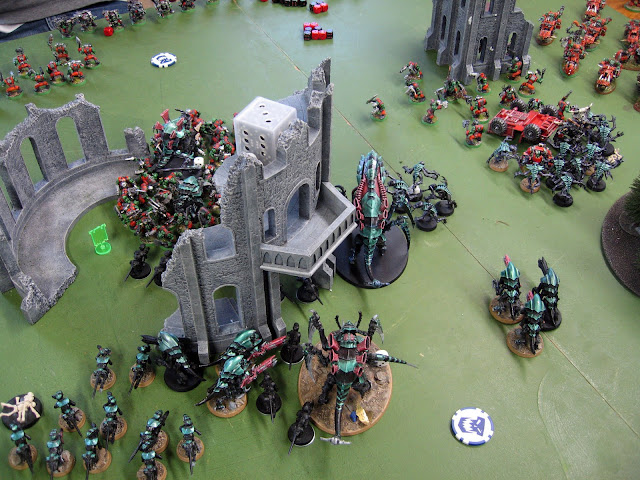 I shoot my hive guard and monstrous templates into the boyz in the open and kill half of them.  I'm able to get the rallied genestealers into combat and one unit of gaunts. 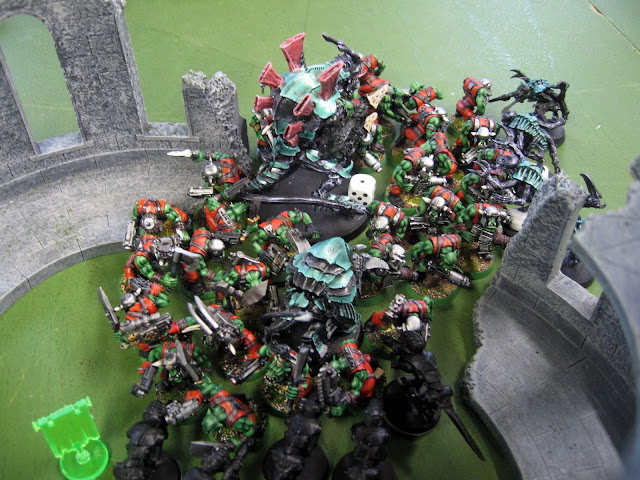 The combat was already in progress so I get to swing at initiative.  Furious charging, poisoned, preferred enemy gribblies backed by their commander knock over a heap of orks and chase down the rest!  That's 50 orks in 2 assault phases.  Everything consolidates into cover.  On the right, my genestealers kill the last nob and put a wound on Ghaz. 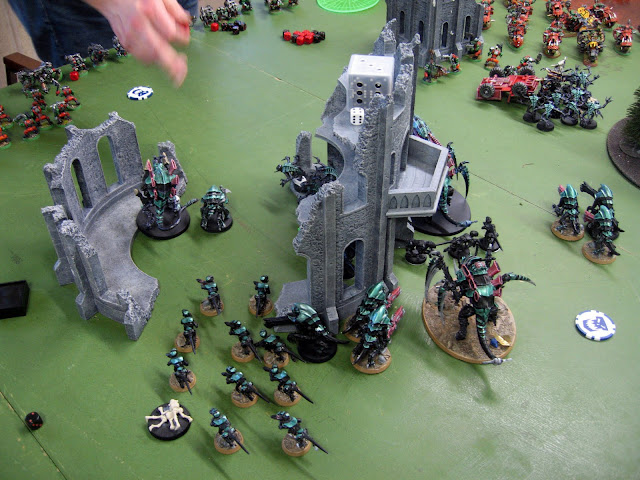 Shaun brings up the surviving boyz and bikers.  The warboss is on the yellow bike and has broken away from the unit. 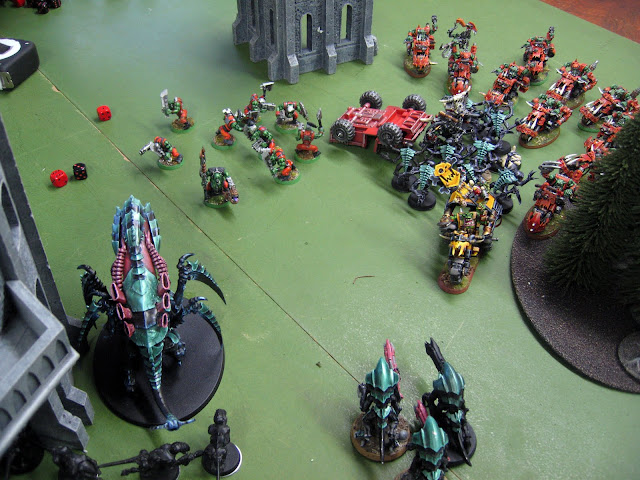 He puts some wounds into the tyrant unit with the lootas.  He assaults the tfex with his boyz and assaults hive guard and genestealers with his bikers. 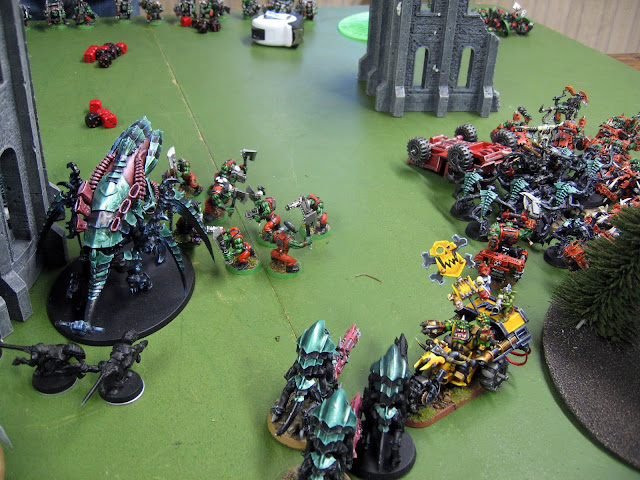 My genestealers are able to kill several bikers before they swing.  His warboss and Ghaz aren't able to do enough and we lock with 1 genestealer and 2 hive guard.  His boyz put one wound on the tfex and we lock.
I send my tyrant forward tow that he's free.  Gaunts shift over and my free genestealers move to save the tfex. 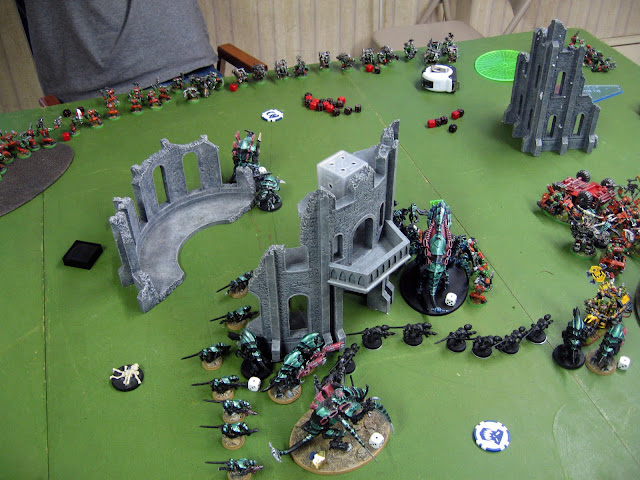 My tyrant unloads on the lootas, I inflict enough casualties to force a morale check, which they fail and run off the board.  My genestealers fail to save the tfex who takes 4 more wounds.  Gaunts assault the warboss and are able to kill him.  Ghaz and the bikers finish off my genestealer and consolidate towards my surviving forces. 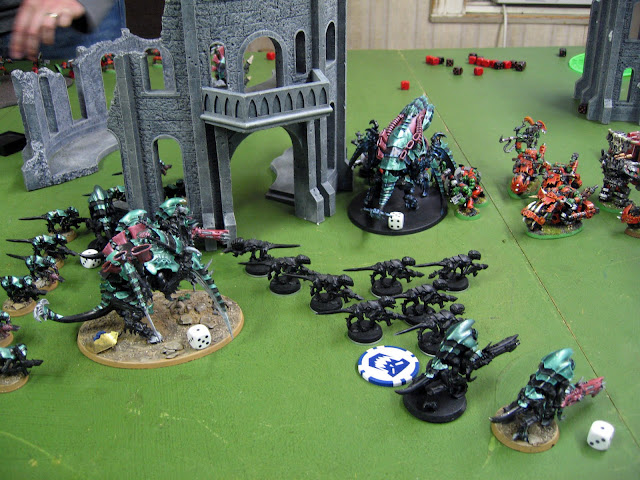 Shaun brings his bikers around and sends Ghaz after the tfex. 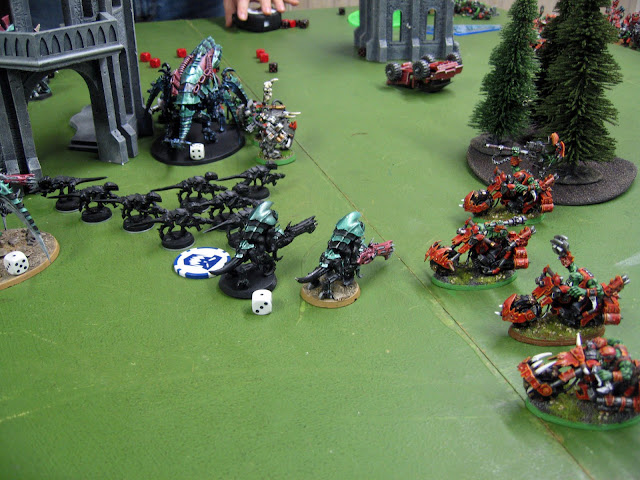 He decides to assault the gaunts instead, and with the bikers assaulting the hive guard, wipes out both units.  My suviving genestealers are slowly going down and dragging orks with them.
I'm running out of units so I throw up some hive guard to protect my tervigon.  Tyrant tries to gun down some boyz. 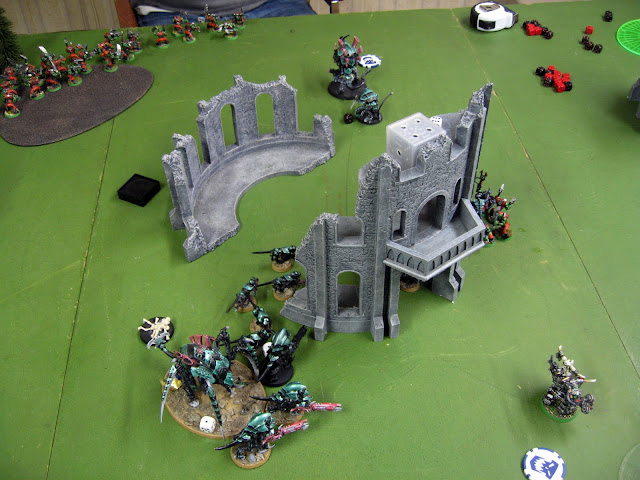 In assault, my lone genestealer is able to break the remaining boyz and run them down.
Shaun rings up the bikers to shoot down my last genestealer (for the KP).  He sends Ghaz after the hive guard, and his kommandos finally arrive on the left. 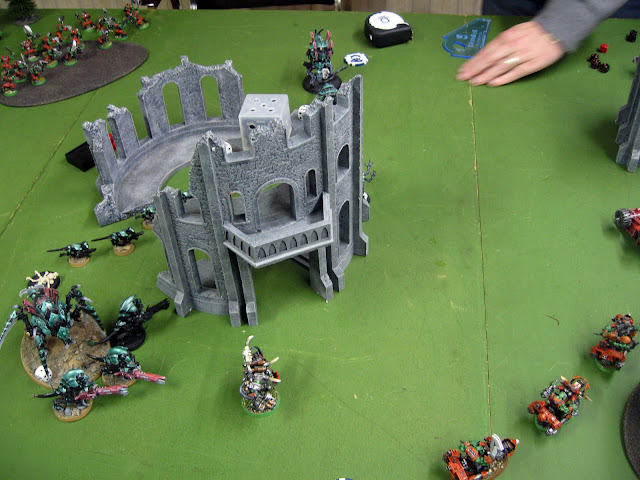 Ghaz wipes out the hive guard and his bikers kill the genestealer.
I bring the tyrant over to shoot at Ghaz. 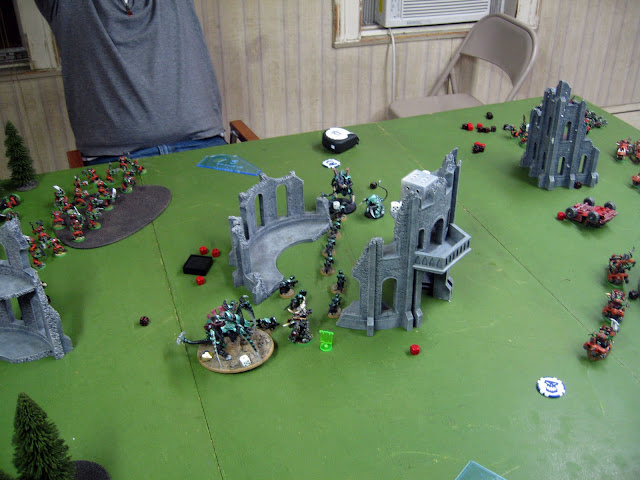 I shoot and assault everything that can, and after the dust settles, Ghaz has 1 wound left as does my tervigon.
Shaun brings over his bikers and the kommandos are getting close. 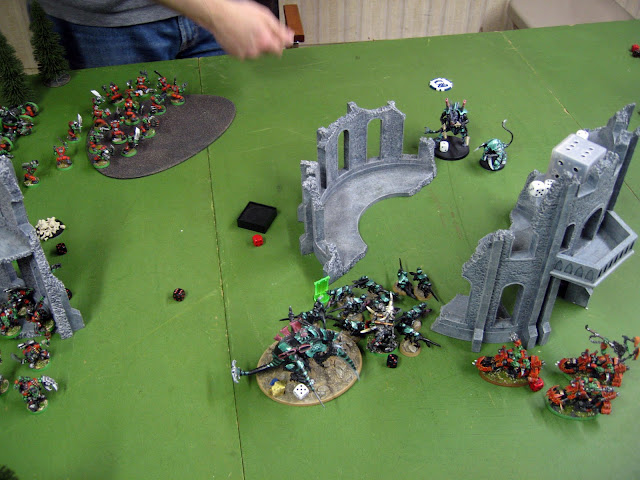 He assaults in and I'm able to drop ghaz and avoid the klaw attacks. 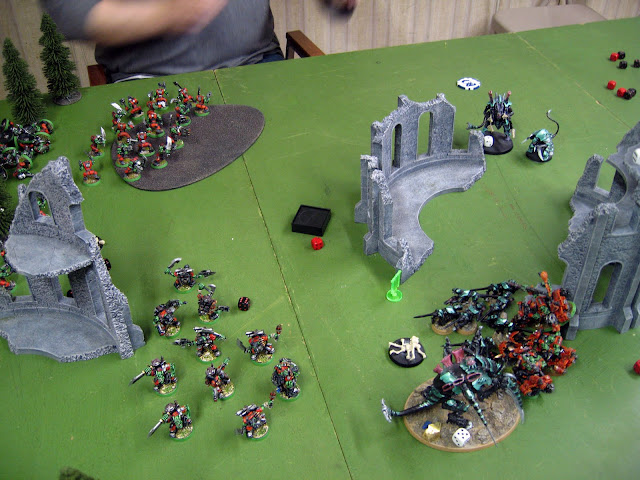 I bring my tyrant down to shoot the commandos.  He kills a bunch, puts them under 50%, they break and run.  In combat, my combined strikes take out the bikes, but his fist is able to swing and kill the tervigon.  After the resulting explosion, I have 3 gaunts left who pass morale (muahaha!). 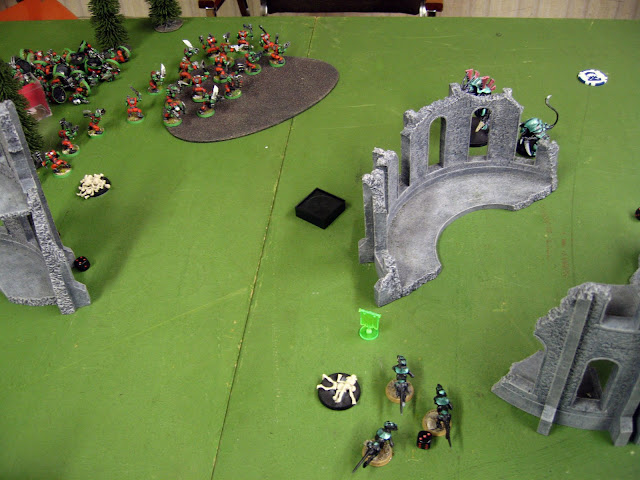 At this point, Shaun has 18 boyz left on his objective.  I have 3 gaunts that he can't kill and my tyrant won't be able to break his big unit.  We tallied up KP's and I'm up by 1.  The game ends with a draw on seize objectives, draw on CnC objectives, and me taking kill points.

Wow, what a bloody game on both sides.  The dice really controlled the pace of the game here.  My huge assault in the top of turn 2 could have swung the battle if I could have kills Ghaz.  He rampaged in my half of the field the whole game.  My saves were good at times (hi, tyrant and guards vs 50 orks) and bad at times (tervigon dying to no retreat).  Shaun's were equally fickle with his klaws missing often and kommandos not arriving until turn 5.  Either way, it was a great game and left me feeling good about this list as my final version.
at 1:47 PM