Posted by hyv3mynd
Still tapping into my stash of batreps from my ATC preparations.  This tournament was Millennium's monthly even in May.  Travis agreed to bump the points up from 1850 to 2000 so the five of us going down to Tennessee for the ATC the following week would have one last chance to practice.
My list (same as ATC):

Tyrant + as, oa, devsx2
Tyrant Guard x3 + whips
Tervigon + ts, ag, cat
Hive Guard x3
Hive Guard x3
Genestealers x19
Genestealers x19
Tervigon + ts, ag, cat
Termagants x10
Tyrannofex + rc, cs, desiccator
My first opponent played Witch Hunters:
Cannonness + jump pack and a bunch of wargear
Celestians + flamers and meltas, rhino
3 Sisters Squads with flamers and meltas in rhinos
Seraphim x5
Repentia (or whatever ones have the eviscerators) x15
3 Exorcists
The first game was DoW/annihilation.  I won the roll to go first and took it.  I've only faced the sisters of battle once before, but I have a pretty good idea of what they can do.  DoW/kp's can be a tough match for nids against a shooty army and his exorcists are a big problem for my MC's.  I decide to deploy my tyrant unit at 24" with the troop tervigon behind it, and infiltrate one unit of genestealers.  Everything else will walk on turn 1, even the other genestealer unit.  I decide I'd rather run them across the table then get a bad side or come in too late via outflanking.  My opponent decides to deploy nothing and bring everything on turn 1, except the seraphim who will deep strike.  I infiltrate my genestealers to about 13" from his edge.  I don't want any crazy first turn assaults with his eviscerator squad. 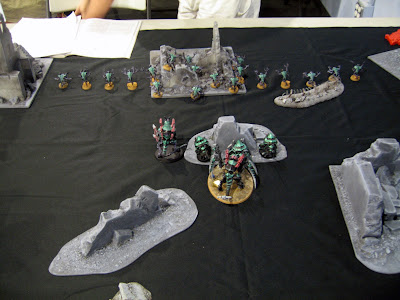 My opponent fails to seize and I bring everything on.  Genestealers up front stay put and get FnP.  Tyrant unit moves up behind the genestealers and everything in the backfield runs. 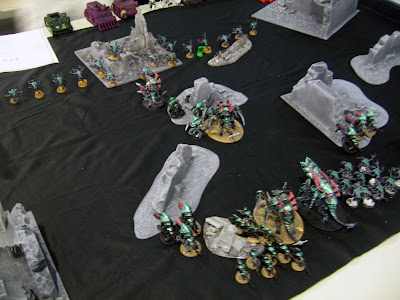 My opponent brings on one exorcist in each corner and one dead center.  One rhino on the far right immobilizes on terrain and the sisters jump out.  One rhino on the left also unloads.  Repentia come in behind the left, and two rhinos come in right of center and smoke. 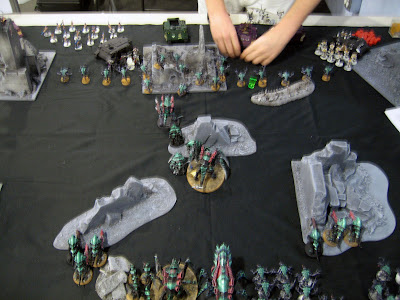 He spotlights my tyrant and unloads the exorcists on him.  When the dust settles, I've lost 2 guard and a wound on the third.  He pumps the two unloaded sister squads into the genestealers and after the cover and FnP, I lose 6.  I pull casualties from the right and decide to push left.
Following through with my decision to push left, my genestealers, tyrant, and tervigon all swing left.  He has an immobilized rhino on his right, so my plan is to make him swing left to counter my push, and intercept his maneuver with my backfield shooters and genestealers. 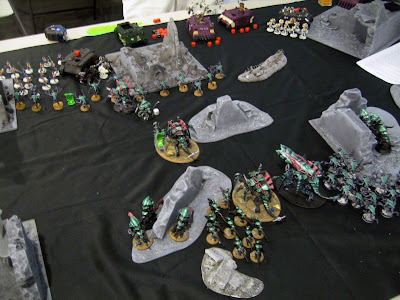 My tfex stuns an exorcist.  Tyrant slaps paroxysm on the repentia and kills a couple with one set of devourers. 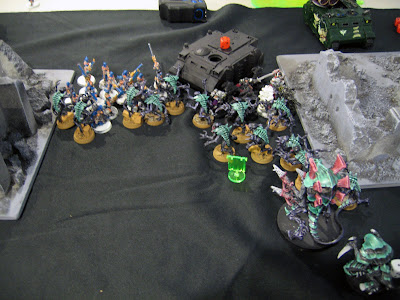 Genestealers assault repentia and sisters.   I lose 5 genestealers, but win combat.  The repentia hold, but the surviving sisters run.
My opponent gets his reserved jump unit and deep strikes them right in my flank.  The fleeing sisters regroup and jump back into their rhino. 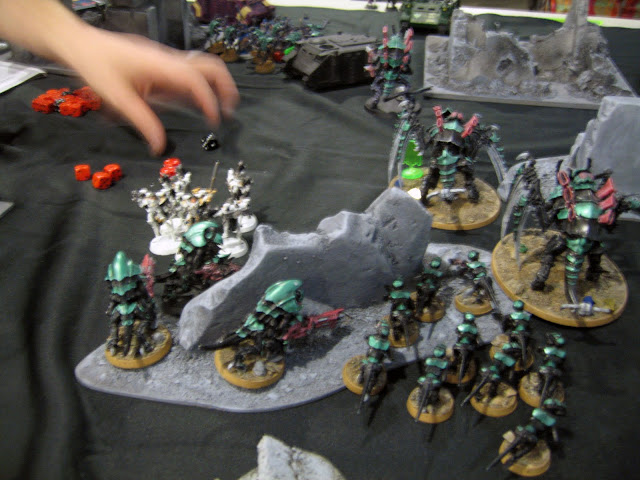 He moves the loaded rhinos up far enough to fire their meltas and jumps the far right unit back into their rhino.  His shooting puts 3 wounds into the left unit of hive guard, kills the last tyrant guard and puts a couple wounds on the tyrant.  In assault, my genestealers wipe out the repentia.
I begin turn 3 by spawning 2 units of gaunts (10/7).  I send them left with the original unit of 10 to deal with the seraphim.  Everything else pushes forward.  Tyrant and genestealers on the right get FnP. 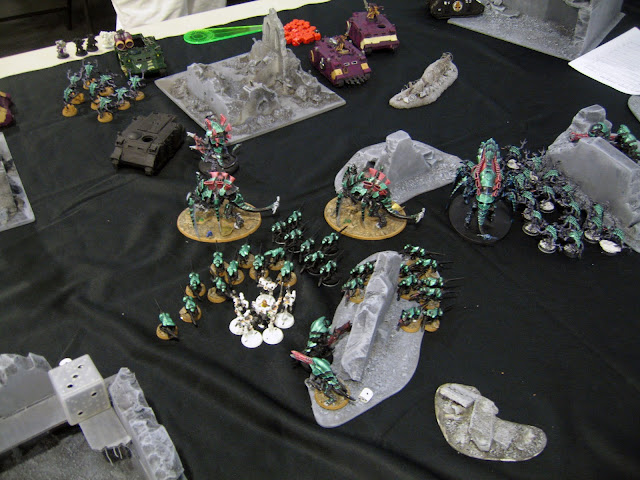 Hive guard explode a rhino.  Tfex blows the turret off the left exorcist.  Tyrant assaults the rhino and wrecks it.  Genestealers up top assault the exorcist and wreck it.  All 3 gaunt units assault the seraphim, both sides take a couple casualties, and we lock. 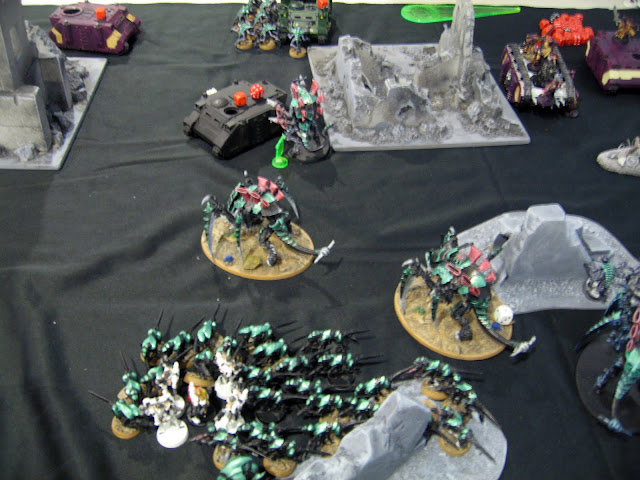 My opponent unloads all remaining transports and moves up all infantry.  He uses a bunch of faith points on shooting attacks.  I lose 4 genestealers up top, my tyrant goes down to melta, a couple genestealers on the right, and a couple wounds on a tervigon. 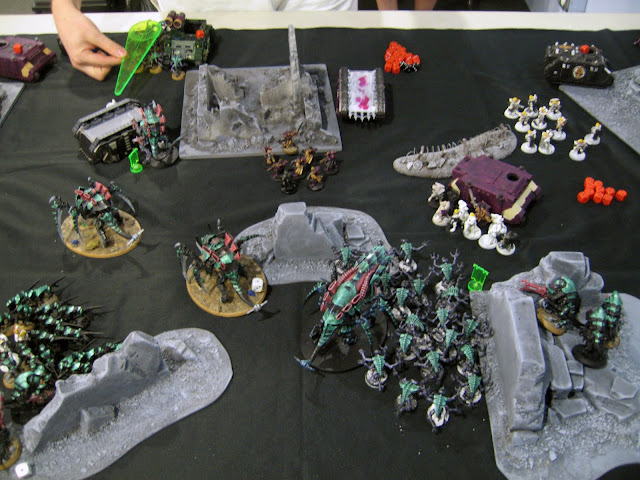 In assault, my gaunt horde knocks down all the seraphim, leaving the cannonness.

My top tervigon spawns another big unit of gaunts and gives them FnP.  Everything else moves up.  Genestealers jink around the closer unit of sisters and go for the rear unit. 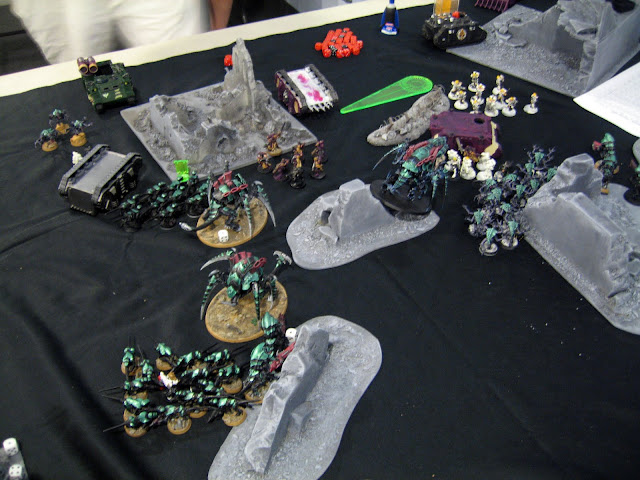 Tfex unloads all 3 weapons on the closest sister unit and assaults them, forcing them to break and run.  My 3 remaining genestealers up top assault the small survivor unit and wiff.  The big unit of genestealers on the right wipes out the unit they assault.  Tervigon and spawned gaunts assault the celestians and wipe them out too.  My gaunts finally drop his cannonness. 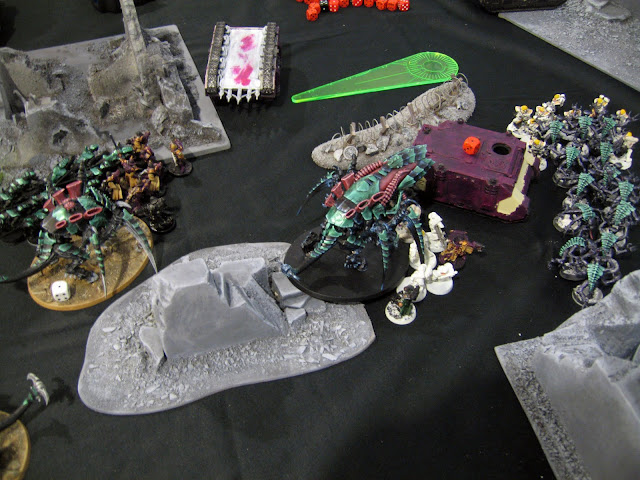 My opponent is running out of units and we're running low on time.  He unleashes his last exorcist and takes out a tervigon and half of the gaunts around it, including one complete unit.  The fleeing sister unit puts a couple shooting wounds on the tfex. 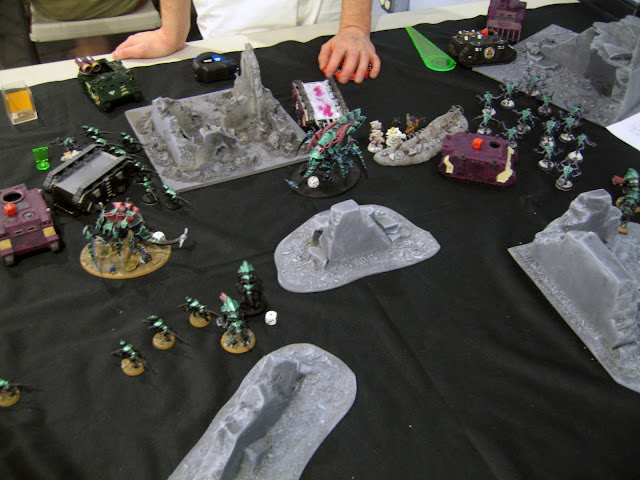 The final turn sees me wrecking another rhino, wiping out the fleeing unit, wiping out the small unit with a lone genestealer up top, and immobilizing the weaponless exorcist. 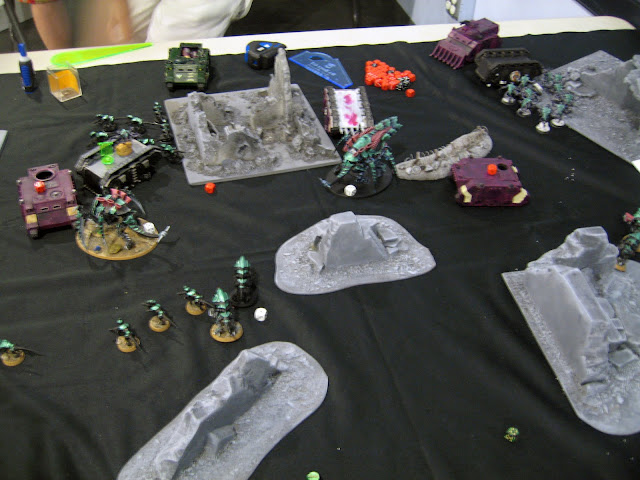 My opponent tries to snipe my last tervigon with his last exorcist, but it lives with 1 wound.

The game ends 11kp-3kp in my favor.  I gave up a tervigon, unit of gaunts, and my tyrant unit.  My opponent had an exorcist and two damaged vehicles left.  It was a pretty textbook game for me.  19 genestealers with cover and FnP back by the tyrant unit with wound allocation, cover, and a 2+ armor save make for two difficult units to deal with when they start in your deployment zone.  I used that foothold to push my opponent into a reactionary stance, then moved into a denied flank position to pull his right units up, and countered with genestealers and shooty units.  It went as well as I could ask for, allowing me to give up few units and nearly table my opponent.
at 12:03 PM