Posted by hyv3mynd
I just wanted to say Happy New Year and thank you to all my followers and readers.  It's been a crazy year for me both in the 40k world and the real world.  I began 2011 trying to finish my tyranid army for the ATC in May.

At the same time, I was also preparing for a trip to St. Lucia to marry my soulmate Kristyn. 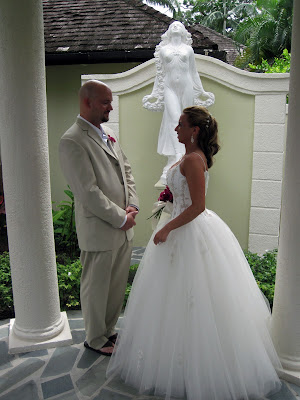 Posted by hyv3mynd
Following two major victories with max battle points, I head to the top table to face Trevor's Space Wolves who took down mech Dark Eldar in round #2.  Trevor also took first at the 'Ardboyz semi-finals here in Western New York with his wolves and won the free army.  This was going to be a challenge!

Posted by hyv3mynd
I had some interesting conversations after round #1 during the lunch breaks.  Only three of us earned full battle points during round #1.  One was Trevor (Space Wolves), a team mate from DaBoyz GT team event who also won Western New York's 'Ardboyz semi-finals.  The other was Allan P who had a Dark Eldar list with several raiders and a couple venoms and ravagers.  I wasn't excited about playing either of them, and luckily I didn't!

Instead, I found myself facing Joe Johnson yet again.  He was a team mate from the ATC and we've played each other a few times.  Joe also took 2nd Renaissance Man at NOVA this year and his "skittles marines"/salamanders have won painting and appearance awards all over the country.  He brought his ATC list minus a few marines so I was intimately familiar with it and how he plays it.  This was probably a bad match for him, playing a drop pod army that needs to get close against a close combat army.

Posted by hyv3mynd
I'm actually going to do some batreps out of order since I still have five Grey Knight reports recorded, but you guys respond so much more to Tyranid content.

Millennium Games held its invitational tournament on December 10th, finishing their 2011tournament season.  To earn a spot, you must have placed in the top two in one of their monthly tournaments.  I took best overall twice during the year with my Grey Knights,  but I have been playing them so much that I needed to mix it up.

The format would score table quarters, kill points, and objectives (5 fixed every game) with rotating order or priority with primaries worth 12bps, secondaries worth 6bps, and tertiaries worth 3bps.  Comp was also player scored with 6pts for each "favorite opponent list" votes or 3pts for each "second favorite list" vote.  Painting was worth 3pts/2pts/1pt voted by the players.

Since I have been playing my fluffy Grey Knight army so much, I decided to go back to my roots and put together a "harder" Tyranid list.  I would lose points in the comp and painting departments, but I wanted to max out my battle points.  I weighed the options with my two painted armies and just knew my painted Tyranid collection would handle table quarters and 5 objectives much better.  I took a modified version of my ATC list which ended up being:

Posted by hyv3mynd
Well, it's been a crazy week and things won't be calming down for a while.  Last week's two tournaments and painting league kickoff left me with little time to paint or convert.  This week has been all about Christmas, doing shopping, and dealing with the extra work load.

This week wasn't a total loss though as I started playing with some new models for the painting league and the next 250pts of my escalation army.

Acting on a suggestion from my friend Tim, I converted a couple plastic haemonculi so I'm not restricted to the finecast one. 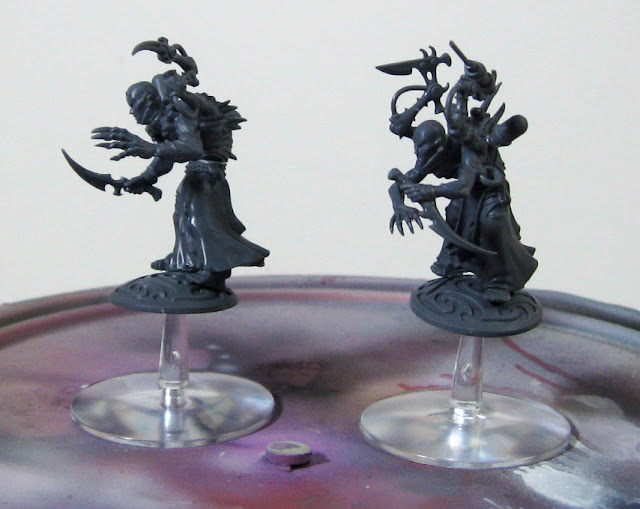 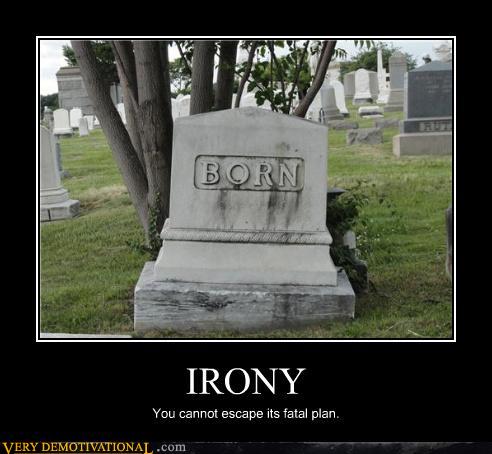 Today was event #3 in my crazy 40k week.  I took my Grey Knights out to Boldo's Armory 15 year anniversary event.  The format was a simple 1250pt event with book missions and no comp.  This was my list: 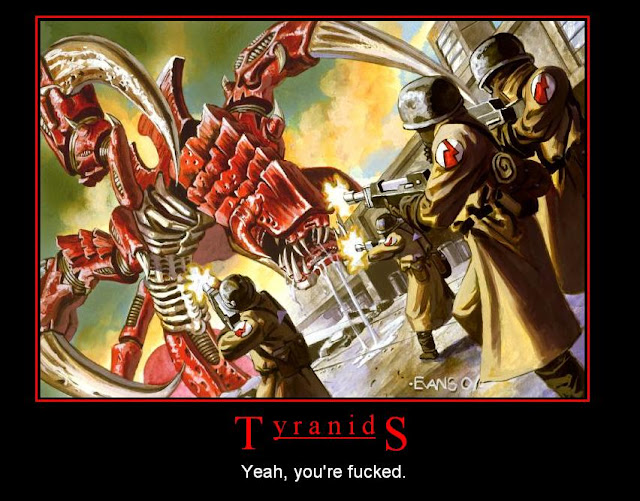 Today was the second event in my 40k triple play week with the Millennium Games Invitational.  This event was invite only, requiring you to place during the 11 monthly tournaments to qualify.  This was the best of the best of our locals and included ETC players Jay W., Shaun K., and famous painter Joe J. (2nd renaissance man, NOVA 2011).  List breakdowns included 2 GK, 2 SW, 2 DE, 2 Nids, 2 BA, 1 Eldar, 1 SM, 2 CSM.

Posted by hyv3mynd
I played my 3 league games tonight.  It was good to get out of the house, see familiar faces, and play some non-tournament games where it's OK to lose.  As with trying any army out for the first time, I lost all three games hehe.  I did have fun though.

It was good to see the difference between grotesques on paper and grotesques on the table.  They weren't quite as resilient as I would have hoped.  T5 and FnP is nice, but a lack of armor, move through cover, and grenades makes them a difficult unit to get value out of.

Anyways, here are some pics from tonight's games.

We're allowed the next two weeks to play up to 3 games with a 500pt, fully painted (doesn't need to be based) army and record the results.  Each win/draw/loss is worth points towards a final loot auction once the league finishes at 1850pts.

This week I've been getting everything base coated and batching some shading and highlights.  Here's my first 500pts.  No force org was required for this period, but no HQ, t6, or av13+ is allowed. 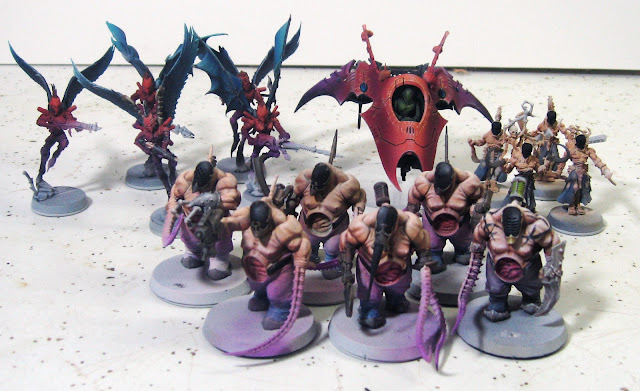 All the infantry needs another round of shading and highlighting to match the test grotesque on the right.  I plan on giving everything some freehand work; either tattoos or runes on the armor.  I sculpted and painted guts inside the belly hole where the ogre symbols would have gone.  After the models are sealed, I plan on inserting some water effects to make it look like a portal into their innards.  Here's a closer look at the freehand flickerfield circuitry on the venom. 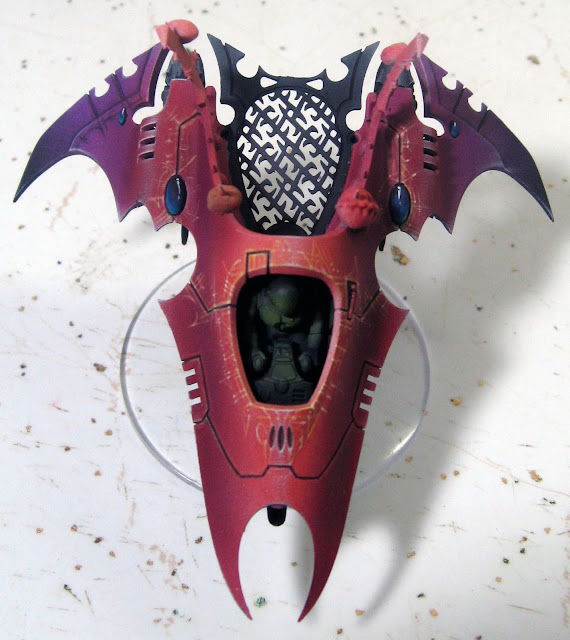 I may post mini reports on the battles as the league progresses.  Stay tuned for more WIP tutorials.  Haemonculi conversions and scratchbuilt webway portals are on the docket for next period. 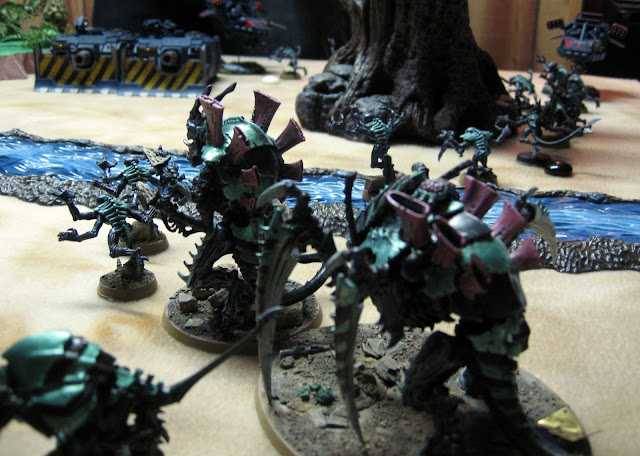 Yes, you read the title correctly.  Next week is "Warhammer Week" for me with the kick off of a winter painting league Tuesday, the Millennium Games Invitational Championships on Saturday, and a 1250pt tournament on Sunday at Boldo's Armory.  The painting league is encouraging people to begin new armies so I will be playing my newly painted Dark Eldar for that.  My compy Grey Knights actually fit well into 1250 as that was also the first tournament level I won with the army.  That leaves the invitational at 1850pts.