John was playing a similar wolf list from our game last year at DaBoyz GT.  Greg was playing his footdar which he took 1st overall with at DaBoyz GT.  Ben was playing mech DE with Vect.  Mike had a foot guard gunline wth a couple manticores, and Bill was playing khorne daemons.  All very hard matches for me with drop wolves and mech DE probably my worst  pairings.  We lost the roll and put up Chris, who issued a personal challenge to Greg.  Playing for the win over pride, Greg put Bill up against Chris and when the dust settled, I had to play Greg.

Posted by hyv3mynd
Well, I'm sitting on almost 20 batreps that will take forever to write up.  I figure I'll  write up the main event first since the results are already all over the internet, and write up my practice games afterward.  Without further ado...

Posted by hyv3mynd
Well we finished yesterday with good news and bad news. It was a 14 hour drive back and I'm home and exhausted, but I'll give you a brief rundown.

The bad news is I had 2 losses on day 2.  My team captain threw me under the bus in game 5, pairing me with Goatboy and his SW with jaws intentionally.  I won first turn, but he seized and that was that.  I did manage to draw objectives and missed drawing KPs by 1 with a rhino pen but only a weapon destroyed result.

My final game was against a double mek kan wall with 9 kanz, 2 dreds, and 45 lootas.  I took first turn and managed to kill 4 kanz right away.  Over the next 4 turns, he rolled maximum shots for lootas 8 times and mowed down my hive guard and genestealers.  I had lootas in assault turn 2, but he was making his 6+ saves 75% of the time.  There were several occasions where my rends were the only wounds inflicted.  The same went for my cluster spines into his mobs where he once made 3 of 3 armor saves and 4 of 4 cover saves.  I killed 10 of his 11 walkers and the game ended with a tervigon penning the last kan but failing to destroy it for the draw on KP.  We drew on c&c and he had sg objectives.

Now for the good news.  By me taking matches others didn't want, my team did a lot better as a whole.  We finished 3rd overall behind Team Toledo who took 2nd and Wrecking BoLS who took 1st.  Chris our eldar player also took best general out of 75 players with 165 of a possible 180.  Joe our salamander player also took best appearance.

So there you have it, practice and tourney batreps will be streaming in over the next month.

Posted by hyv3mynd
Our team consists of:
Shaun Kemp (ETC 2010, 2011) horde orks with Ghaz
Jay Woodcock (ETC 2011) GK foot list with some of everything and 3 riflemen
Chris Courtney: Eldar with Eldrad and 1 of everything
Joe Johnson: Vulkan drop pods
Me: mixed nids  List #2 from my list evolution post

Round #2 we paired against Team Toledo which had 3 more of America's ETC team.  I got paired with Greg Sparks (inquisitor malice) and his footdar list with Maugan Ra, farseer, 10 wraithguard, 10 spiders, 2 units of avengers, war walkers, and 2 lords. I basically got tabled for a 0-30 loss.

Round #4 I requested a pairing with no psy defense and got Tau with 2 shasel with guards, 3x2 crisis teams, hammerhead, 2 kroot units, 4 broadsides, 3 pirhanas, and 2 FW squads in devilfish.  I won KP, c&c, and drew objectives for a 25-5 win.  The team scored 115 this round also.

So I finished the day 2-1-1 earning 65 of a possible 120.  The team earned 380 of a possible 600 but we're actually in 2nd overall after day #1 behind the BoLS team with goatboy (thomas), TPM (paul), darkwynn (nick), spikey bitz(rob), and next level painting (kenny).  First game tomorrow against them and game 6 should be against the Wrecking Crew.

First game was against the wrecking crew's TPM and Manboygenious (spikey bitz) with dual BA; Sanguinor, meph and several assault squads with priests.  we drew on a 5 objective game.  Not bad considering these two were on the first place team at adepticon this year.

Second game was against a guard list with manticore, PBS, hydras, and two vendettas allied with wolves with jaws priest, grey hunters, and long fangs,  we barely won capture and control and table quarters.

Third game was against fully mech DE and BA for modified KP.  We won that one by a bunch.

So we finished the event with 2 wins and a draw against some really nasty lists.  We didnt get many battlepoints though so we tied for 3rd or 4th.  Tomorrow is the main event with 4 games, ten 2 more Sunday.
at 1:43 AM 6 comments:

In a couple hours, we're piling into a car and driving 14 hours to Tennessee for the Dicehead Siege.  I figured I'd put up some pics of my final army.  I was able to get everything on the board painted to the 3 color minimum and based.  Most of the army is shaded and highlighted also and I have 51 gants for spawning.  You'll be able to figure out which list I chose.  N.I.B. and Crispy got it right.

Posted by hyv3mynd
The final list submission due date was yesterday, so I figure it's time to discuss my list evolution for this event.  Yesterday I also attended a 2,000pt tournament with my final ATC list, so I'll break up the lists with some teaser pics from the event.  On the hobby front, I painted up my battlefoam display board and finally finished all my genestealers.  Pictures of those at the end.

Keep in mind every game in this format will have 2 c&c objectives, 3 sg objectives, and killpoints will be scored.  This means every list is designed to do well with objectives and yield as few as possible kp's.

Posted by hyv3mynd
Well, blogger was down for a while so sorry about that.  ATC is now 8 days away and I'm making the final push (and driving my wife crazy).  We had a loss as one team member encountered some unavoidable circumstances and we had to find someone else who was able to take 5 days off and travel.  Luckily, Doug volunteered and with only 3 days until final list submissions, we were back on track.  I've only had a chance to play Doug once, back in December 2010 and he beat me soundly.  He's also placed in the top 3 more often than not at our RTT's so I know he'll do well. 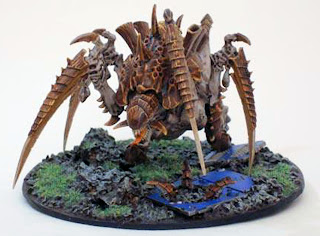 Here is some content I solicited from Erle, my follower from Belarus.  I'm a big fan of natural looking nids as you know mine are also inspired by beetles and wasps.  Erle's nids caught my eye back when he sent me a link to a small batrep a few months back.  Enjoy! 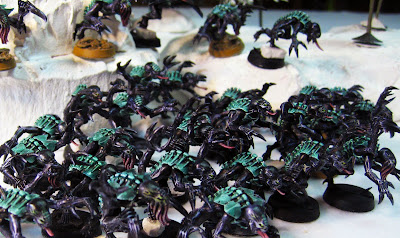 Splinter Fleet Colossus grows!  I'm nearly finished with an ungodly amount of genestealers.  These guys have taken me weeks, but I'm very pleased with the end result (well almost, bases will get finished next week).  I tried my hand for the first time at OSL (object source lighting) on their eyes to make them glow.  What do you think?

Posted by hyv3mynd
I'm not being lazy, I promise!

Currently, I'm painting about 4 hours a day and nearly finished with my main force.  Spawnable gants and bases are next on the list.  I'm also getting about 2 practice games a week which is nice.  I had a 2 month losing streak after the wedding which just reaffirmed how important practice is, but I've won my last two games which has really helped my morale.  However, I have been playing some of the best guys in the country so I can't expect to win every game heh.

Posted by hyv3mynd
From Peter:

This is a LONG Email, so I thank you in advance for taking the time to read through all this.

I stumbled on the synaps3 blog while browsing through Kirby's 3++ (reading a lot of different sites lately as Warseer is down), and I have to say, I've very impressed with the wealth of information on Tyranids. I'm writing with a few questions in mind that I hope to hear your opinions on.

A little about myself: I've been playing Warhammer Fantasy for almost 20 years, but started 40K when the Tyranids 5th Edition Codex came out. Like many players, I chose to collect Tyranids as my 1st 40K army as I just love the fluff and look of the Tyranids, very "unique" in the 40K universe.

Anyways, after expanding my collections over the past 2 years (adding Eldar and Grey Knights to my 40K collection), I've recently come back to my first 40K love, the Tyranids who sadly still haven't come out with an official Tervigon model. Now I bring this up because I am not much of a model converter. When the "official" Tervigon model comes out, I'll probably buy two of them, but in the meantime, I would like your thoughts on constructing Tyranids Lists without fielding Tervigons amongst other things. So, questions.......