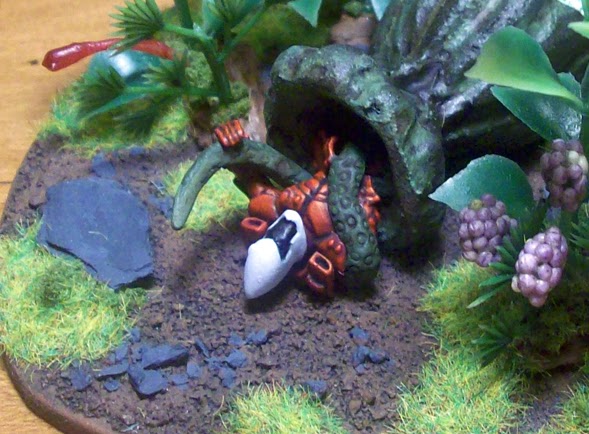 Every year I devote a part of my hobby year to creating a new themed terrain board. In 2011 it was my Train Yard board, in 2012 it was my Ancient Ruins board and last year I created my Tyranid/Jungle board. So this year I had a few ideas such as an Eldar/Winter themed board, Swamp Ruins board, or to continue on with my necron board. Well, after looking around on google images I finally made my decision to go with the Swamp Ruins board. Why go with this theme? Well, after working on the Tyranid terrain I was impressed with how detailed the terrain pieces looked and I especially liked the water effects pools I added to the pieces so I wanted to explore, experiment, and expand with working on that theme. So let's take a look at what I have planned.


First of all I spent a few hours on Google Images looking at different swamp/ruins images from Asia and Central America. 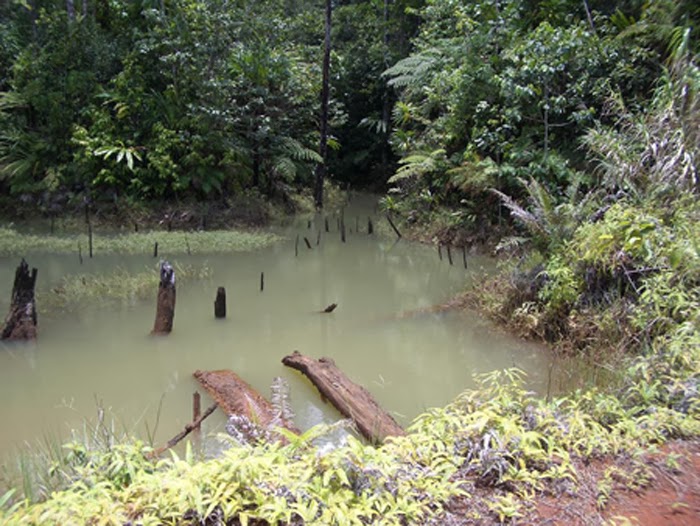 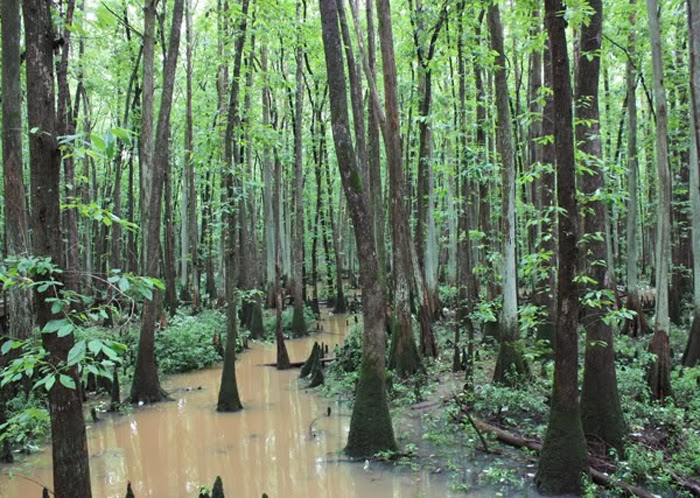 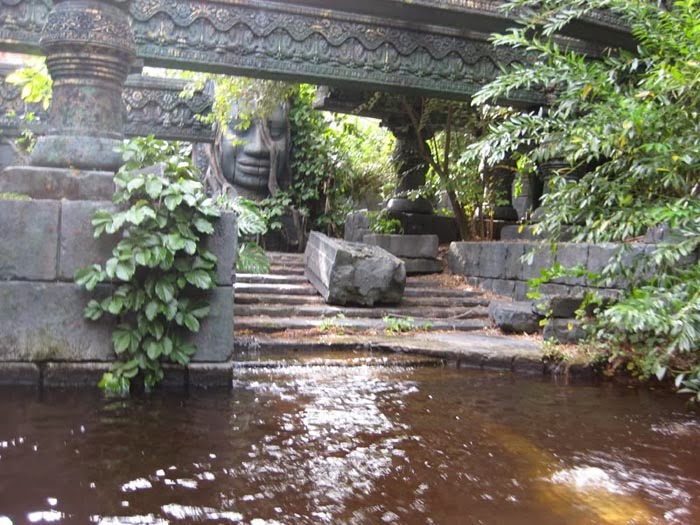 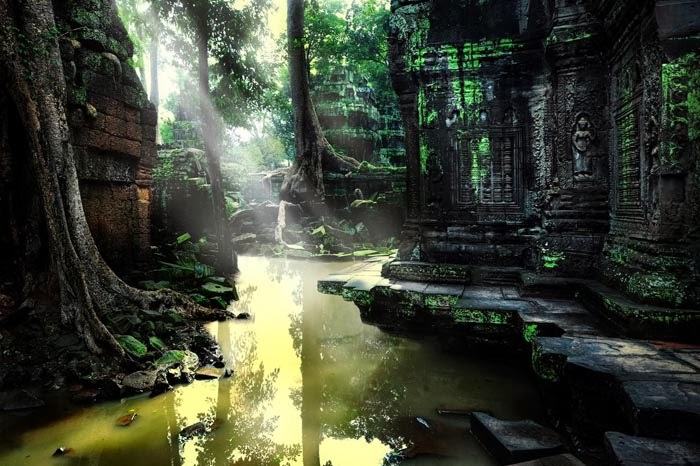 The above images really appealed to me as far as the color of the water, the placement of the ruins, the plant growth and the dead trees. So once I got a good idea of how I want the board to look I did a quick sketch of the layout. 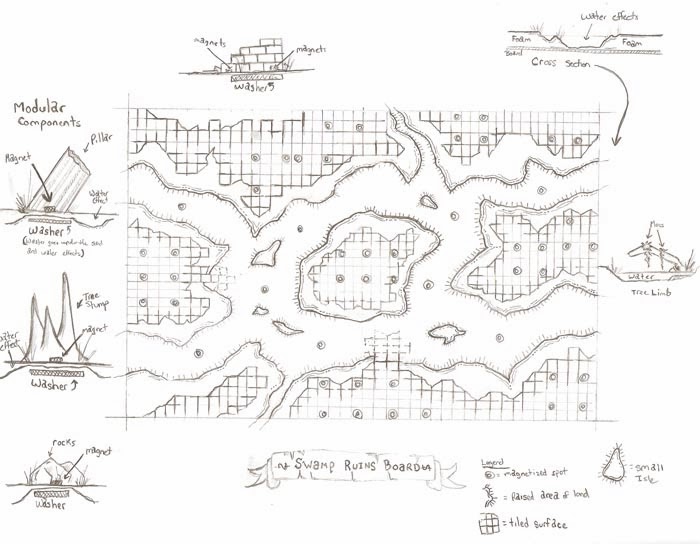 As you can see from the above drawing, I want to make the swamp take up the entire 6 x 4 surface area. This will mean that I will not be able to transport the board to and from the local shop but it will allow me to go all out and add a ton of detail to the board.

The base of the board will be 2 - 6' x 2' pink foam sheets that I'll glue together to form a 6' x 4' board. Then I will carve out the channels for the swamp as shown in the above image. The raised areas will be the dry land that will contain vegetation, trees, and ruins. However, while the main surface will be relatively flat, the pieces that will go on top will be modular. In the drawing above you will see the little circles that I have placed all around the board. Those areas will actually have metal washers embedded into the board. Then as I make the modular pieces I will add magnets into the base of the pieces so that I can vary the board between games rather than have all of the pieces in a fixed location. Plus those modular pieces will be created so that I can use them on other boards or take them to the local game store.

I've already started working on the tiled "blocks." I've cut out over 300 1"x1" squares from plastic card and I am carving in the little nicks and breaks by hand. As I make progress on the board throughout the spring and early summer I will post updates on the blog.

This past weekend I participated in the March Team Tournament at Millennium Games. I am still writing up the reports so for now I will post some pics of my games. Look for a detailed report next week. 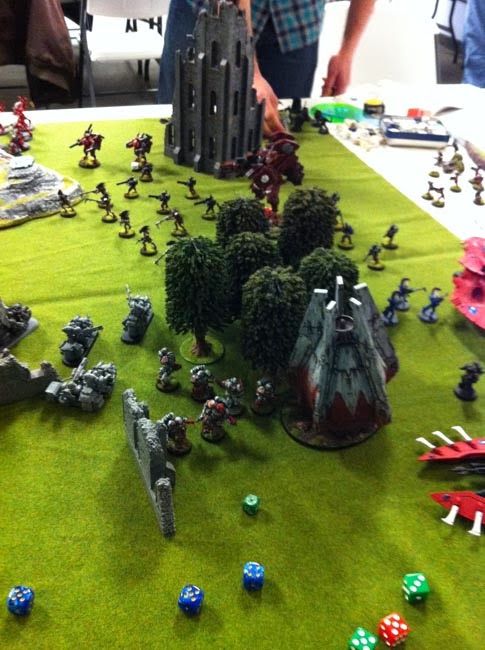 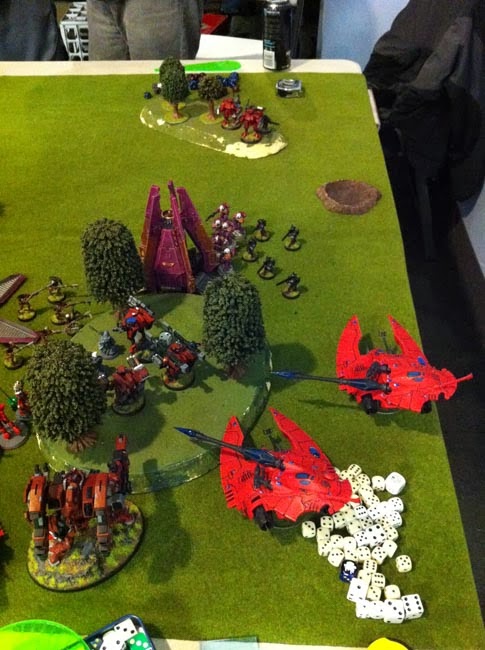 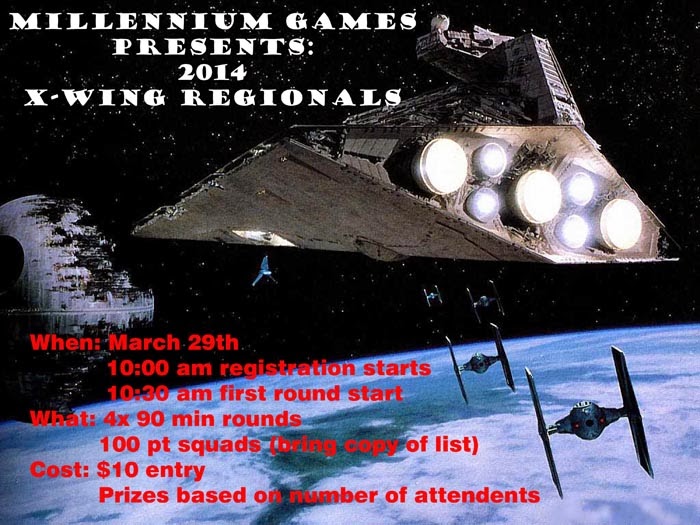 This will be my first X-Wing tournament since I started playing last year. I've been getting in a lot of games lately and I am currently bouncing around between two lists.

Lately I've been forgoing the low count/high pilot lists for a 4 ship build with less named characters and lower initiative pilots. I've had a couple of practice with variations of list 1 and I feel pretty comfortable with it. This list is slow but puts out a lot of fire power. Garven will hang back and buff the B-Wings with focus tokens to make them last longer while the Y-Wing will Ion the biggest threats.

List 2 is actually a list that I have yet to run but I am dying to find a way to have fun with the A-Wings. (They have always been one of my favorite ships in the movies.) The idea is that the A-Wings will zip up along a flank while Garven and the B-Wing will do their thing in the middle of the enemy swarm. Will this work? Not sure but I hope to get in some test games in the next couple of weeks.

If any of you have run lists with 2 or more A-Wings let us know how they did. What worked and what didn't. Feel free to share your thoughts with the other readers by posting your comments below.