Posted by hyv3mynd
With two solid wins under my belt, I head to table 1 to face Mike from Buffalo.  The mission was pitched battle with 5 objectives.  Mike's list:

This was a real nasty list and I think he nearly tabled everyone he's played so far.  I knew I had to stop the furioso with talons as it can pretty much kill everything in my army with some average rolling.  Everything else, including Meph, was going to be secondary.  The other aspect that makes this list nasty is forcing me into a reactionary stance.  His mobility, shooting, and potentially assault components can best me if applied right so I know this is going to be real tough.


I won the roll to go first.  I had the option of deploying nothing, but I figured if he took the opportunity to get Meph on my side of the table, he could really wreck me.  Plus, all 5 objectives ended up centrally.  So I deployed 12" up and spread out to react to most drop pod contingencies. 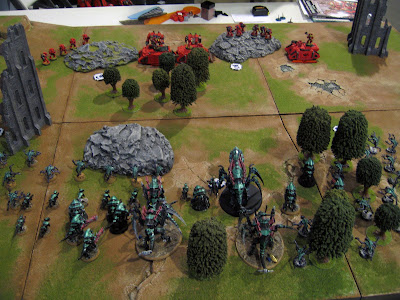 Mike deployed his 3 rhinos covering the librarian and lascannon dreads and Meph.  Devestators went on a hill and tactical lascannon squad on the left flank.

I moved everything forward to sit on as many objectives as possible.  I figure it's easier to defend an objective then try and push your opponent off once they get dug in. 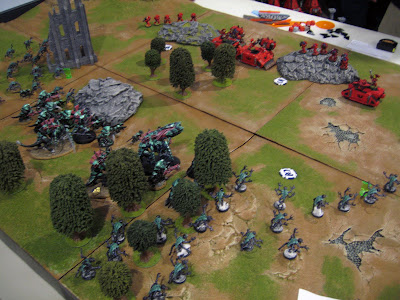 Mike begins by dropping both furiosos right in front of me. 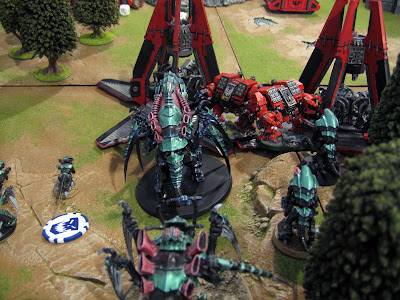 The mobile rhino zooms up with an assault squad and Meph behind.  The squad from the immobile rhino moves up for my genestealers (which have FnP). 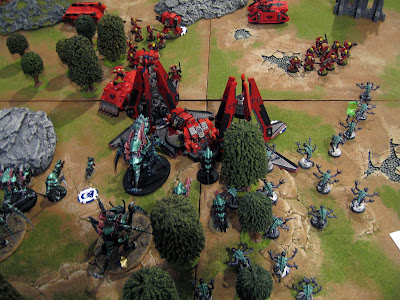 His shooting puts a couple wounds on the left tervigon and kills 2 hive guard from the right unit.  He assaults my genestealers, each side takes a few casualties, and we lock.

I spawn two units of gaunts large enough to ring each tervigon and keep Meph away. 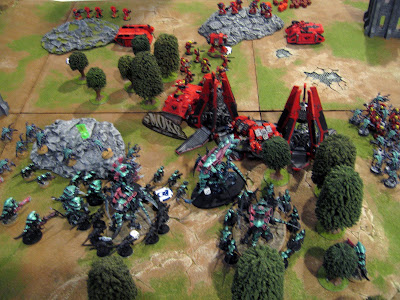 I put all my hive guard into the furioso with talons and the best I get is "shaken".  I decide to shoot the tfex at the double fist dread and then assault him for the best chance at destroying it.  This would cause a bottleneck with the tfex also and I resigned him as a sacrificial unit.  After the dust settled, the dread was shaken and I took 4 wounds...  Genestealers on the left assault the central rhino and wiff.  Genestealers on the right knock the assault squad down to 1 marine.


Mike gets his last dread in with two hvy flamers and puts the pod directly behind my hive guard.  Luckily for me, he scatters 11" back and nearly out of range (sorry for the bad pic). 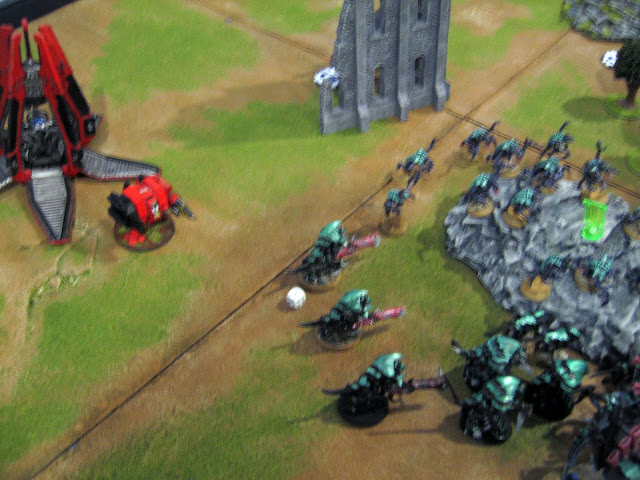 Mike pulls a switch-a-roo and sends the talon dread after my genestealers.  This was a gut-shot for me because I figured they could handle Meph, but those talons will chew through a lot more. 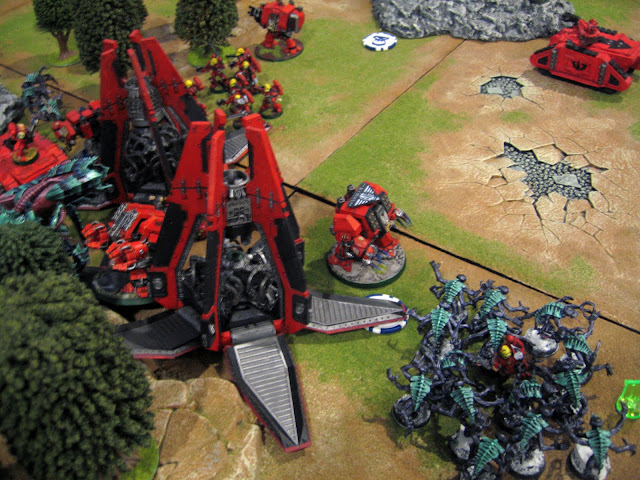 In the middle, he sends Meph to finish off my tfex and lines up a nasty multi-assault with his librarian dread and combat squad on my genestealers. 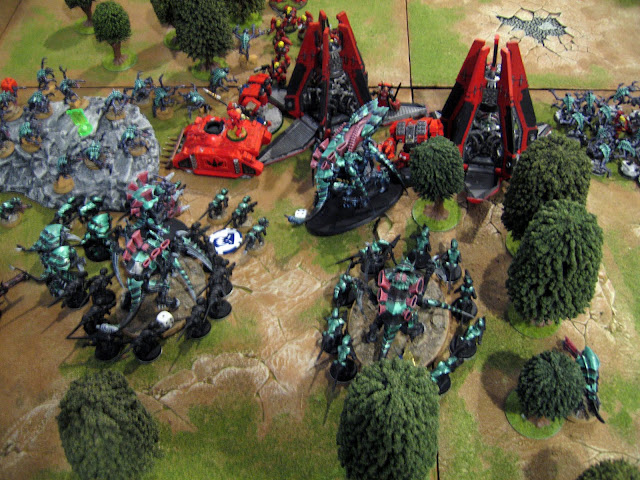 My tervigon takes more wounds from the heavy weapons.  In assault, I lose my tfex to Meph.  The talon'ed dread kills 10(!) genestealers, they break and run (I was 1/2" out of synapse after casualties).  The libby dread and marines assault my genestealers on the left.  I win combat and break the marines, but lock with the libby dread in a tarpit that will last the rest of the game.

Things are starting to go downhill for me with both genestealer units out of commission and a lot of my shooting power is gone.  I spawn another unit of gaunts and push up towards objectives. 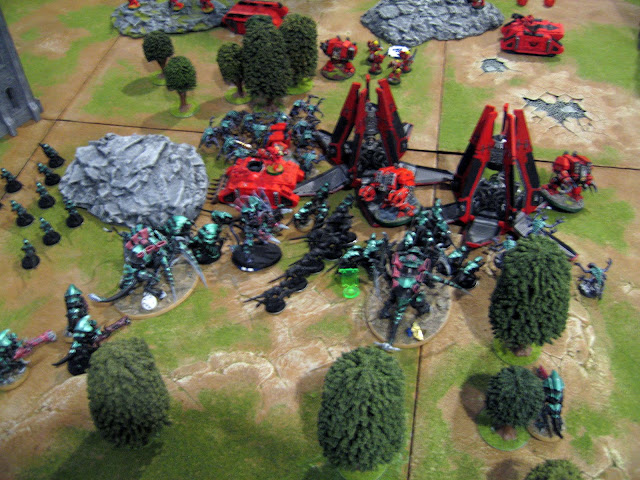 My broken genestealers rally but don't get far.  I decide I'm gonna tarpit Meph with gaunts as he's behind the dread and I don't think my tyrant can make it.  Hive guard explode the dual flamer dread that just dropped in.  Tyrant shoots Meph and does 1 wound and fails to land paroxysm.  I assault Meph with the two painted units of gaunts and block the dread in with an unengaged unit. 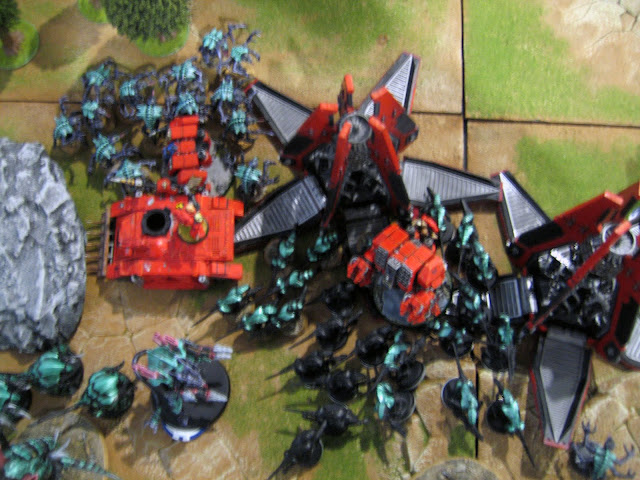 Libby dread and genestealers bang on each other.  Meph wins combat by 1 (hehe).  Everything remains locked.

At this point, I am taking very few pics.  We're on turn 3 and almost out of time.  In all my gaming experience, assaults with BA and GK take the longest by far, especially when incorporating furious charge, feel no pain, preferred enemy, poison, and several initiative steps.  Add in several turn 2 assaults thanks to drop pods and you make for a very slow game via insane dice rolls and re-rolls.

Mike zooms his last rhino towards the left flank objective to block my gaunts heading that way.  His talon dread chases down and slaughters the surviving genestealers.  Fist dread annihilates the unit blocking him.  Meph kills several gaunts.

It's the top of 4 and we definately aren't getting another turn.  I spawn 2 small units of gaunts and try to hold some objectives in the middle and right.  Hive guard wreck the last rhino and mike unloads closer to the objective. 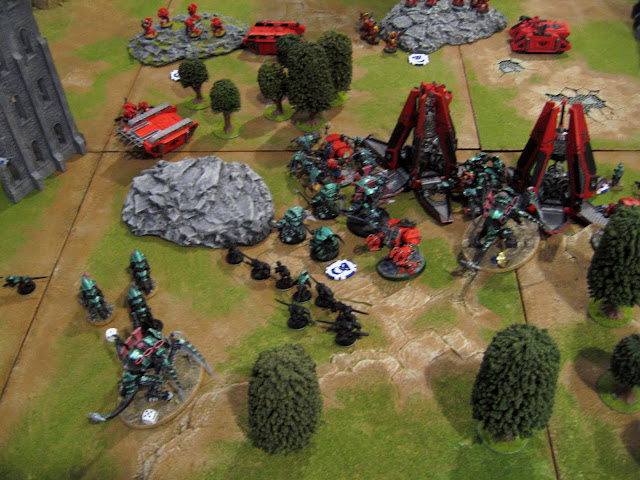 My tyrant assaults the fist dread and explodes it.  The gaunts keep Meph locked.  The libby dread tarpit continues.

It's the bottom of 4 and we're already out of time.  Mike moves 2 squads onto objectives, contests mine on the right and puts all his missiles into my gaunts, killing enough to knock me off the objective on the left.  Then, he rolls a "5" and runs his unit onto the objective.

The game ends with Mike winning 3-1 objectives.  It was a very solid game by him with a super tough list.  AV13 dreads can be a real challenge for nids, especially with Meph in the mix.  This was my first game against a BA dread drop list also, so I definitely need more practice against the build, but I don't think it's unbeatable for us.  Mike ended up tied for first as it was only 3 rounds and we had enough players to leave two undefeated.  A couple guys had two wins and one draw for second place.  I tied for third with someone else who went 2-1.  Not as good as I wanted, but my wins were solid and my loss was close-ish so I went home happy.
at 11:07 AM