Posted by hyv3mynd
Here's another game from my unreported archive of battles leading up to the ATC.  This was a practice match vs Kevin's awesomely painted Word Bearers.  This report will have more pics then my recent batreps as we played at my place and didn't have to beat any time limits or finish before the store closed.

I won the roll and elected to go first.  I know this can be risky against a mech opponent in objective games, but I think my shooting elements can take care of 3 rhinos and a land raiders.  I deployed up against the semi-circle at the front of my deployment zone.  Gaunts up front to screen the hive guard and tyrant star who screened one tervigon.  Tfex and second tervigon hid behind a tree in case he seizes the initiative. 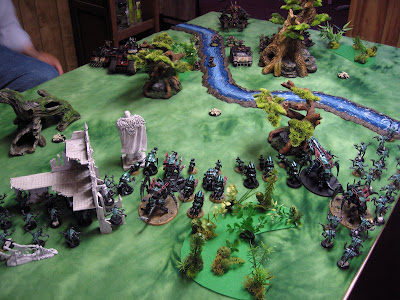 Kevin deploys favoring my left flank with Abbaddon in the land raider with the terminators and the bezerkers in their rhino.  Havocs go in area terrain centrally with a rhino covering his oblits.  The third rhino went on the right with the small foot squad behind the big tree and his defiler all the way in the back.  I infiltrate one unit of genestealers on each side.  The unit on the left is back out of the threat range of his land raider and terminators.  The unit on the right is strung out behind my main forces for cover as there's literally nothing on my right flank to give them cover.
The game begins with me giving both units of genestealers FnP.  My tervigon on the right spawns 4 gaunts and burns out (yup 1,1,2).  I advance a little, but not much.  I want to see where Kevin will commit and I want to maintain as much cover as possible. 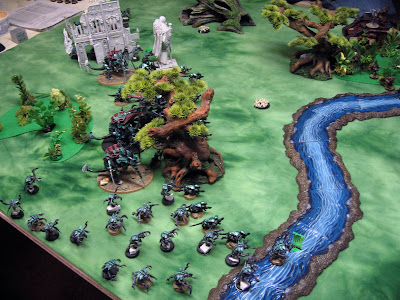 My shooting immobilizes his central rhino.
Kevin moves some units up and his two flanking rhinos move further around the flanks.  He keeps the land raider in place to fire. 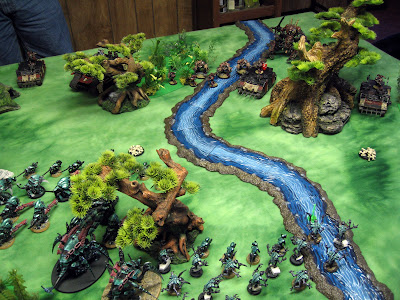 His shooting features several big scatters and misses.  I lose a few gaunts and genestealers.
I push up and plant my tyrant on the central objective.  Units on both flanks move up to threaten objectives on each side.  Genestealers get FnP again. 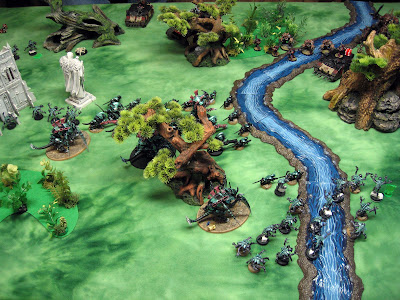 Hive guard wreck the berzerker's ride on the left. 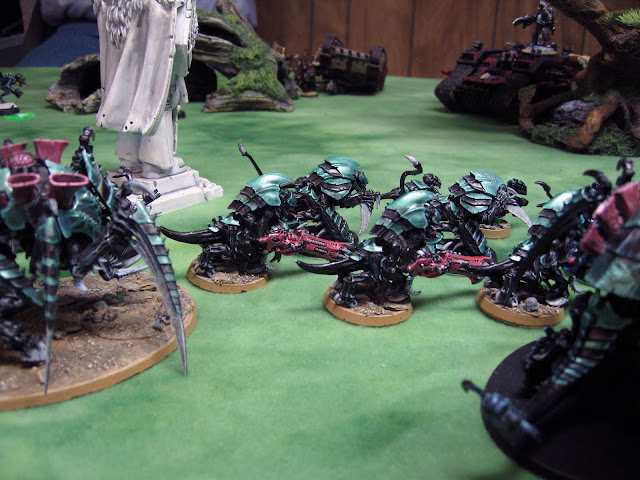 The tyrant wipes out the entire squad of havocs with his devourers. 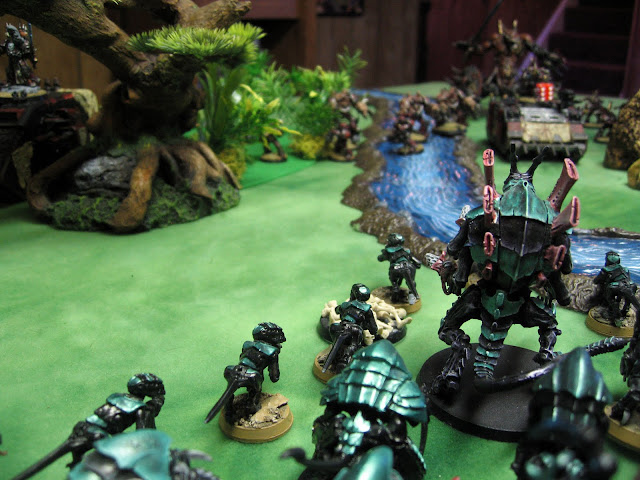 Kevin creeps up with his berzerkers and land raider. 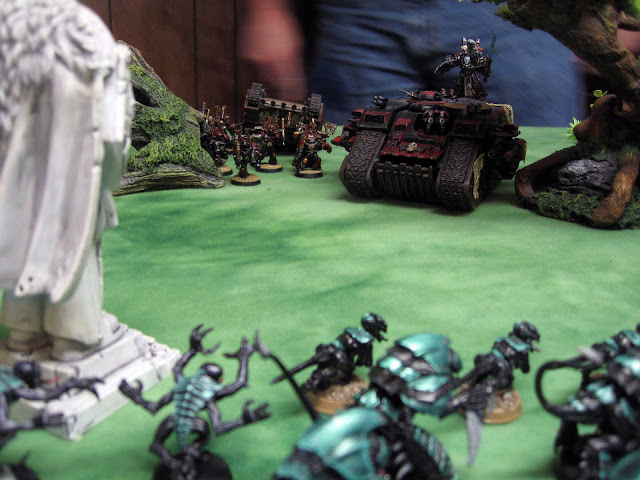 His forces in the center and on the right flank hold. 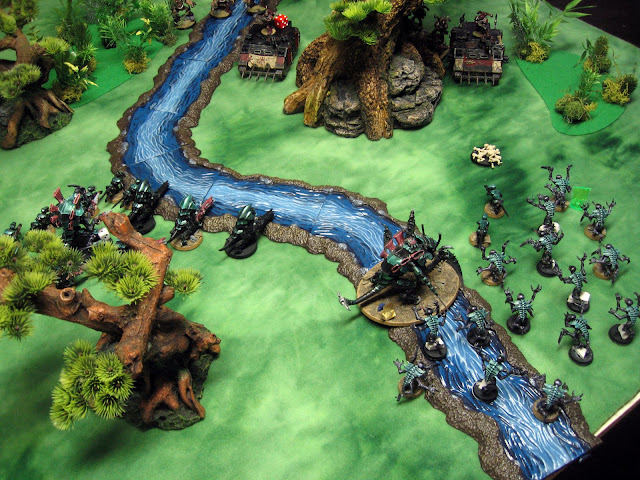 In in his shooting phase, he puts two wounds on my tyrant unit and kills a handful of my genestealers.
Now that his berzerkers are on foot and in range, I move my genestealers from the left flank out of the ruins into position.  The plan is to draw abbaddon out of his ride to fight genestealers, then swamp him with gaunts.  To ensure he goes after genestealers, I make a line of gaunts about 12" from his land raider protecting the heart of my army. 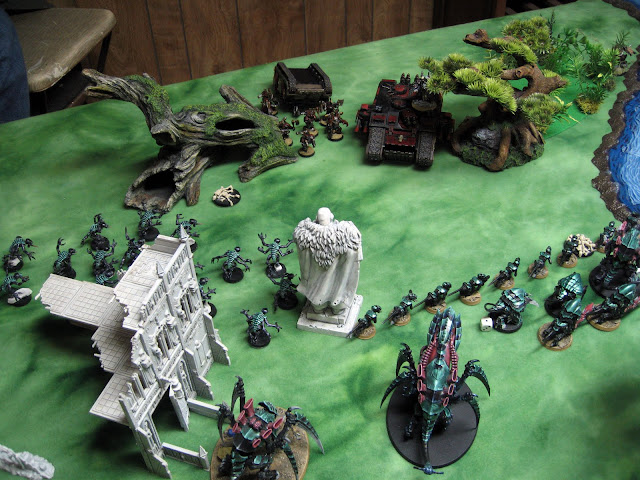 On the right flank, I send my genestealers, tervigon, and gaunts up.  I don't know if I have enough strength on that side with win the objective, but I commit them anyways to keep the pressure on. 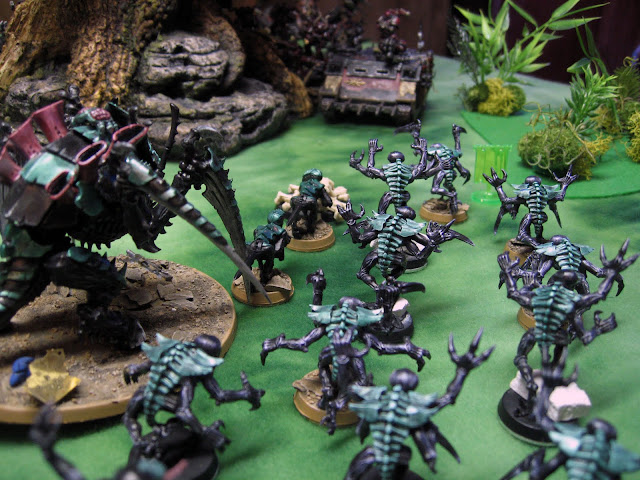 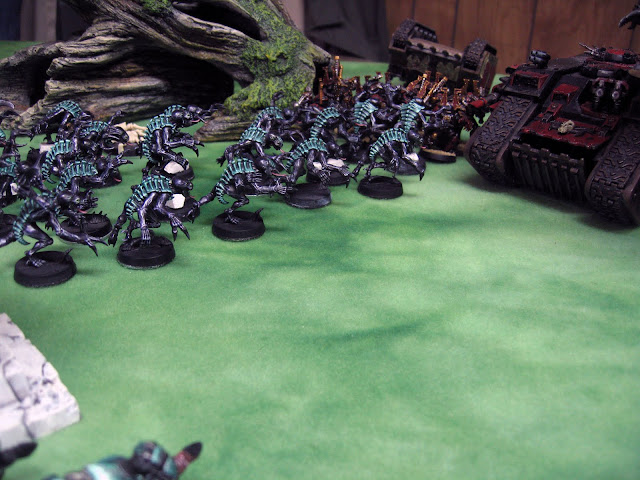 Kevin takes the bait and abbaddon comes out to play. 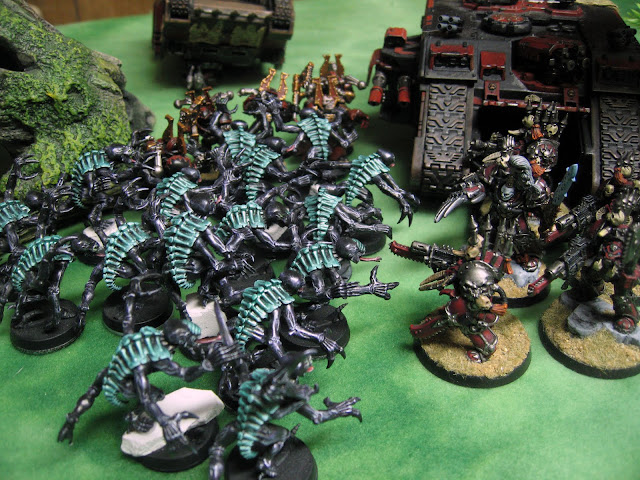 His remaining shooting kills a tyrant guard and several genestealers on the right flank.  Abbaddon and his terminators assault in and totally murder my genestealers down to 2 models who are then out of synapse, break, and run back into synapse. 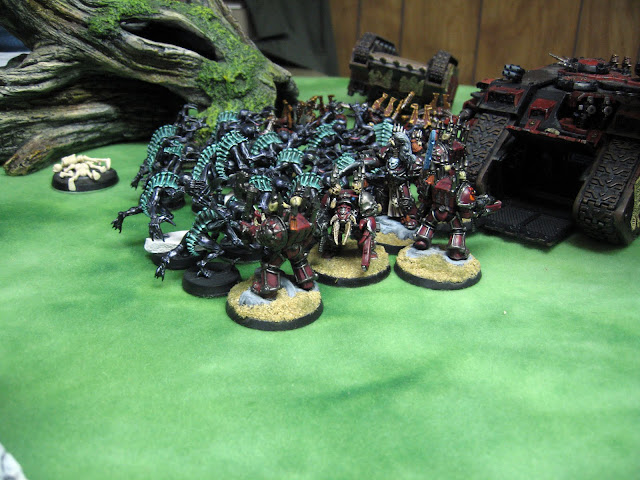 This result actually worked out better for me then another drawn combat as I can now shoot the terminators and slap some psychic powers on them.
On the right, I send my surviving units up to keep him from scoring that objective.  My genestealers may finally be able to assault this turn. 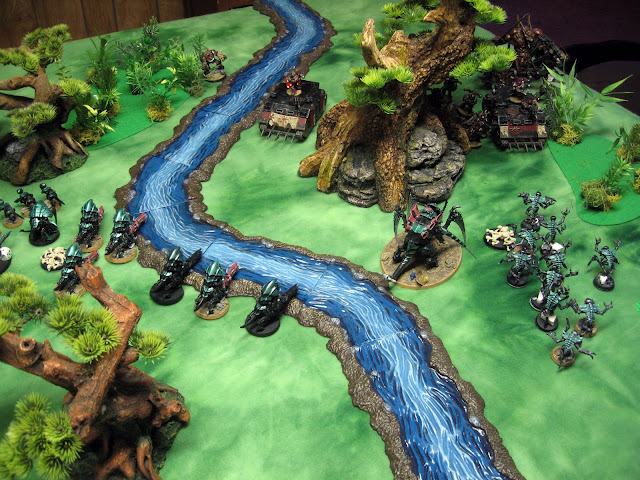 My hive guard reach the center of the table and maximize their firing arcs.  They are only able to stun the rhino on the far right after cover saves.  On the left side, I spawn a unit of gaunts and I prepare to drop the hammer. 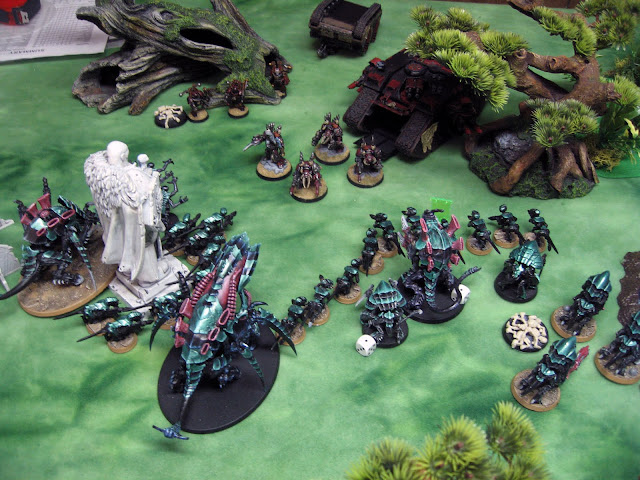 I'm able to kill 1 terminator with shooting and paroxysm abbaddon's unit before assaulting in. I send the two genestealers that rallied into the three remaining berzerkers to see if I can get any casualties before I lose the unit.  They wiffabby. 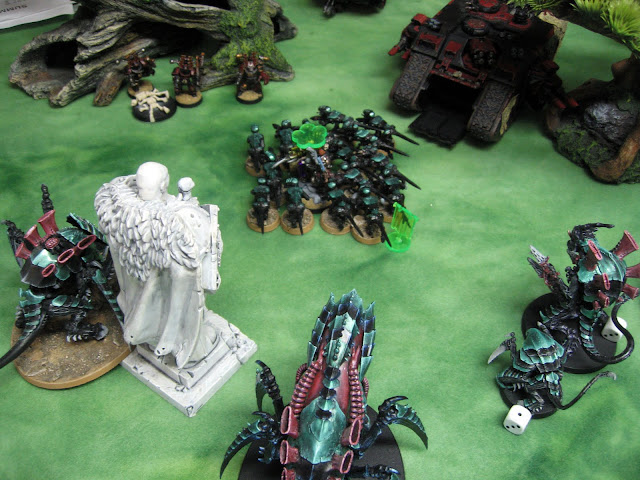 On the right, the genestealers are able to reach the 5 marines on foot. 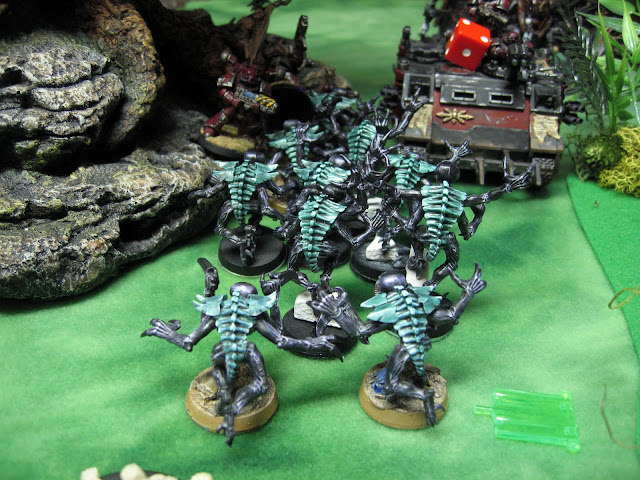 I win combat by a couple and break the unit, but they escape.
Kevin brings up his defiler to combat my genestealer threat. 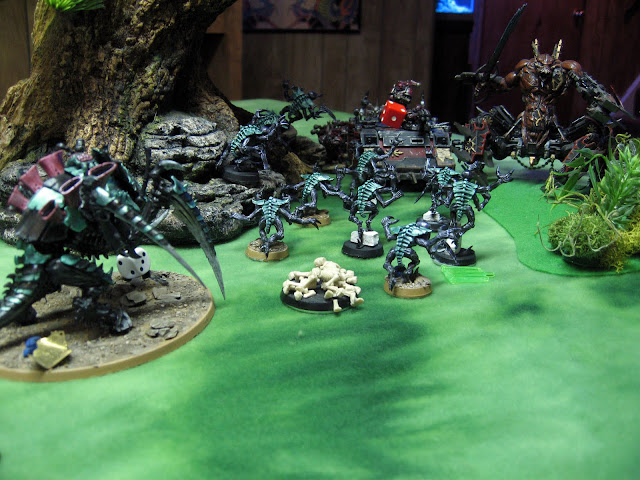 His marines in the center disembark to try and push for my objective. 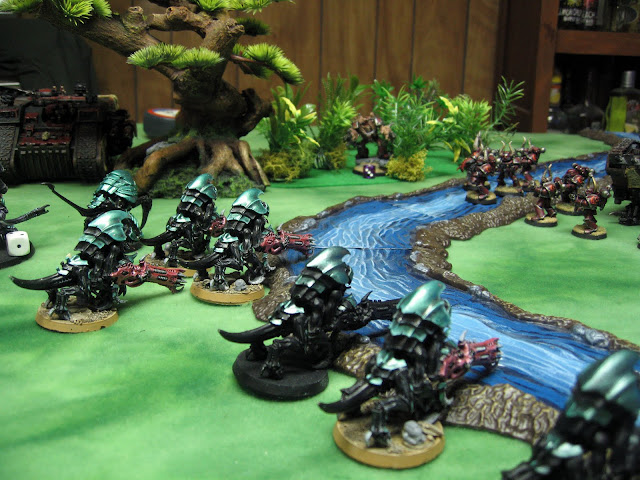 On the right, his marines disembark to shoot down more genestealers. 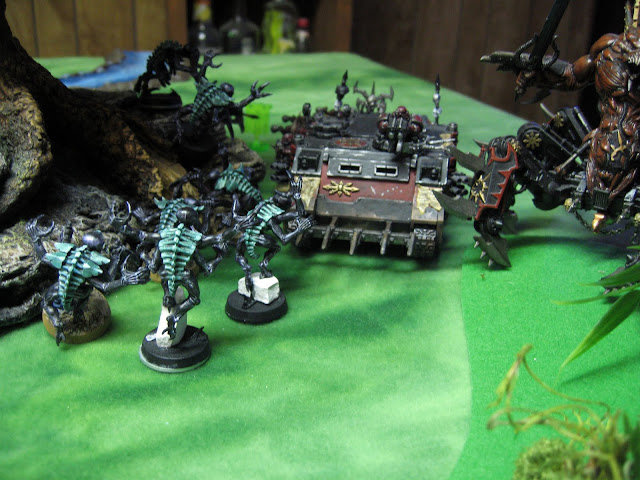 On the left, his berzerkers assault in to try and save abby. 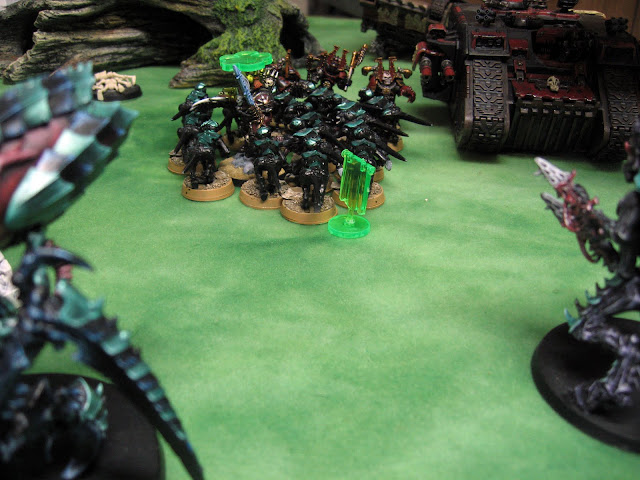 That's the last picture I took, so I don't think it ended well for chaos.  If I remember correctly, I killed abby and the berzerkers.  His defiler rolled poorly in terrain, failed to assault, and got shot to pieces by hive guard.  My tfex and tyrant were able to shut down the land raider and his last chance to contest the objectives I held.  The game ended with me holding 2 objectives.
This game went pretty well with no major tactical issues or surprises.  Kevin's dice are notoriously bad (I think he has a new set now) and his dice were predictably under performing all game.  He could have done a few things differently, but my list can be hard to break if you don't know how to go about it.  Large units of genestealer with cover and FnP can take so much abuse, as can my tyrant unit.  If my opponents split fire at all or have problems with target priority, the added survivability allows me to set up my unit synergies and create enough momentum to sweep the game.  Like I said in the beginning, going first in a multiple objective game can be risky, but I maintained enough table control by taking the center and prevented Kevin from making any major offensive pushes.
at 2:05 PM