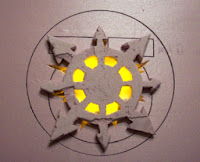 Last week I announced that I was going to switch from the Tau army I had planned to bring to the GT to instead run my Word Bearers army. The more I thought about this decision the more sense it made. I am very familiar with the Chaos codex as I have played it many times over the past year, plus the army is pretty much all painted and has a lot of conversion work and details added to the models. This decision alone gives me plenty of breathing space to add more details to my chaos army plus I gain time to work on terrain and my display board. Over the past few days I started working on my display board for the Word Bearers. So let's take a look at what I have done...


What the heck grubs, I thought you said that you were going to play a Word Bearer's army. That sure looks like an Ultramarines board to me???? 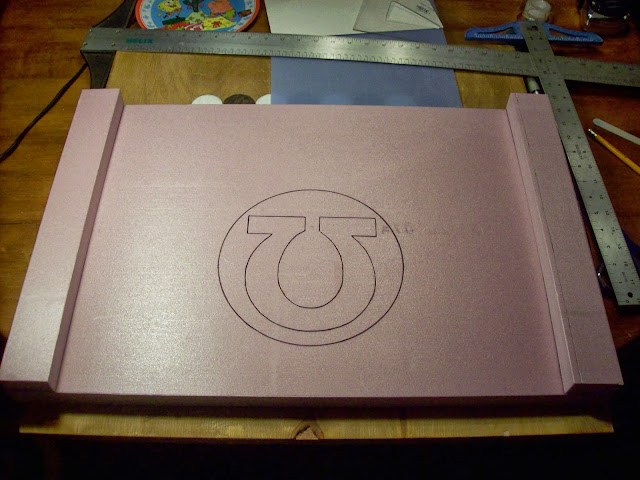 The idea behind the display board is that the Word Bearer's have overrun an Ultramarines world and are in the process of corrupting a sacred temple and attempting to summon a daemon into the material universe.

In the image below I have added the next layers that will represent a hallway with columns and eventual stairs that will lead to a platform that will overlook the summoning process. I also plan on hanging tattered and ruined ultramarine banners from the columns. 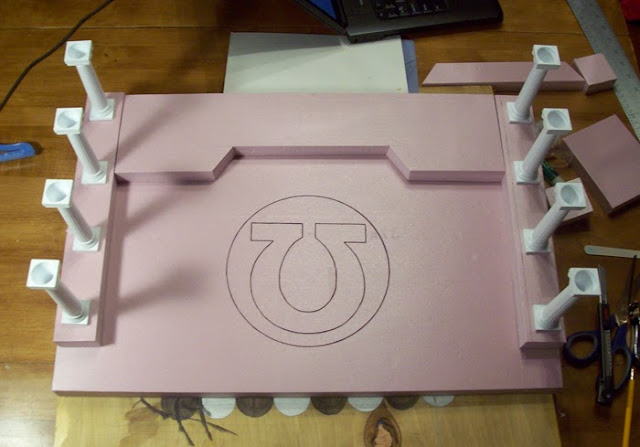 The next step was to carve out a hole in the middle of the Ultramarines symbol. Then I carved a Chaos star from foam that will sit over the whole. I plan on using flickering tea lights underneath the symbol to make it look like a hole is opening underneath the Chaos star. 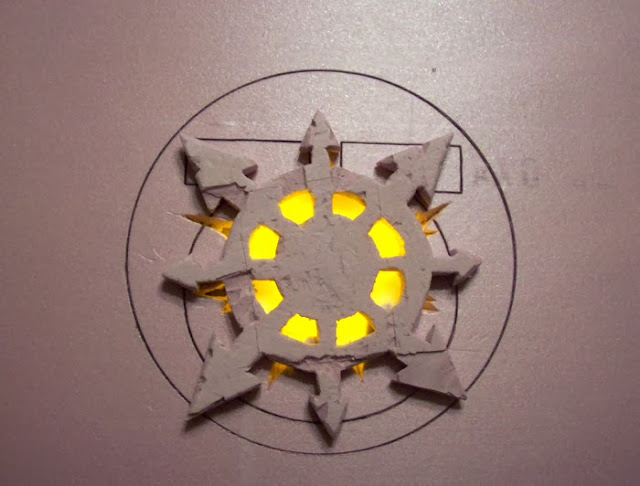 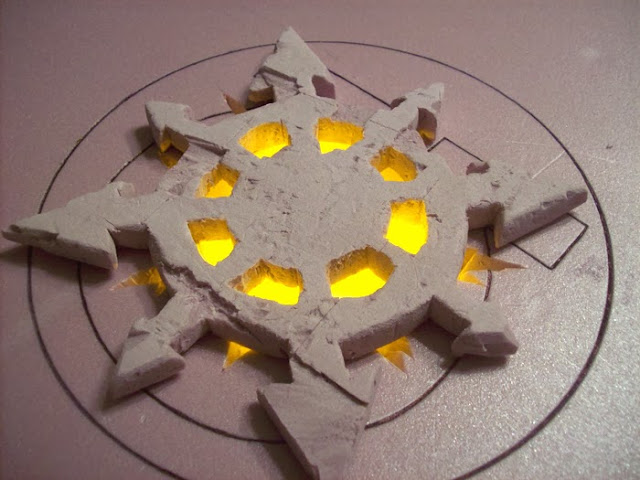 Here you can see that I have added foam board layers to the columns and I have added stairs to reach to the upper level. 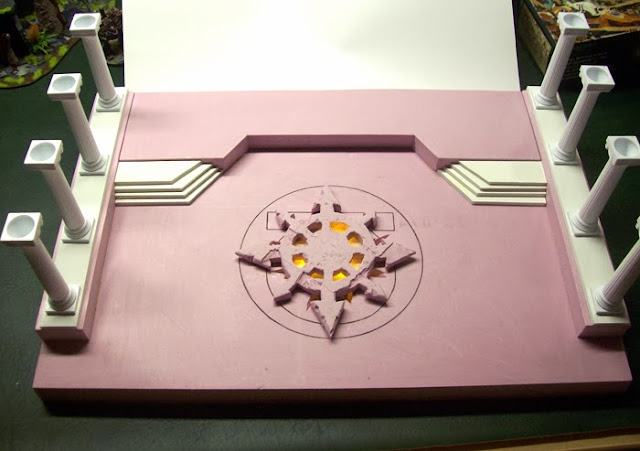 Here is how the board will look with some of my army on it. Note that the Belakor model will be placed over the center of the star to make it look like he will be coming up from the ground. 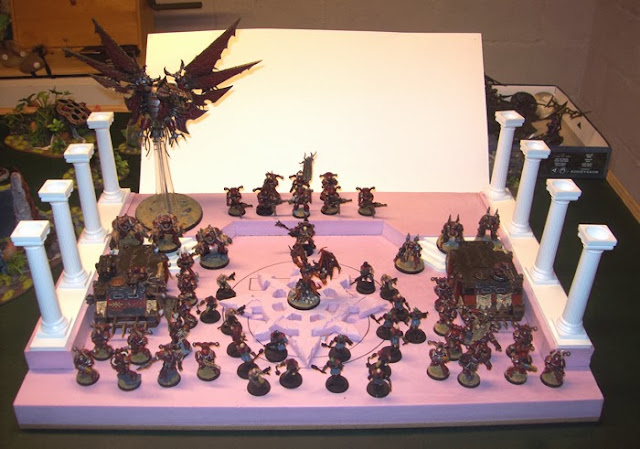 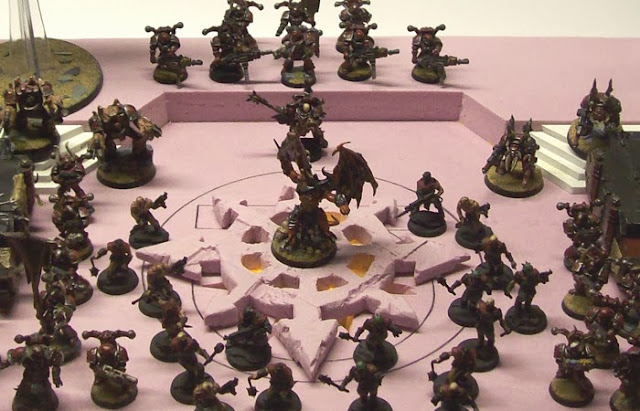 Here is a shot of the board under dim lighting. The candle effect really shows here. 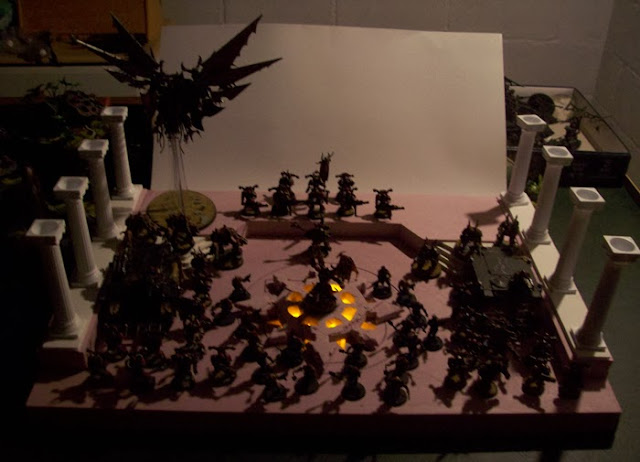 Besides the display board I have also been working on my Dark Apostle model. In the past I have been using the Space Marine Champlain in Terminator armor as my Dark Apostle but since the new starter set came out I have always like the look of the Chosen model wielding the power mace so I decided to start painting him up. 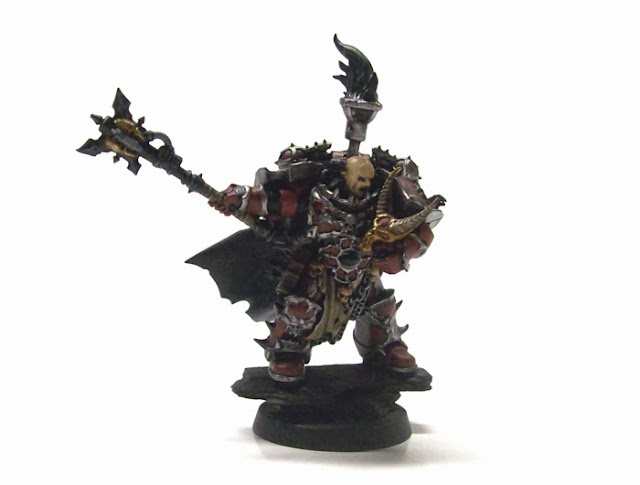 The model is pretty much left alone but I added a burning standard to his power pack to represent his power in bringing the light of Chaos to the mortal universe. I also plan on adding parchments and oaths of hatred to various parts of his armor. In fact, I plan on adding them to most of my foot troops. I should have images of them ready for next week.

In last week's article I posted a proposed army list for the Word Bearer's but on my way home from work tonight I stopped by Millennium Games and picked up the Chaos Daemons codex to see what I could add as an allies detachment. So next week I'll list a few ideas after I have had a chance to digest the codex and see what you guys think. As always, comments or suggestions are always welcome.