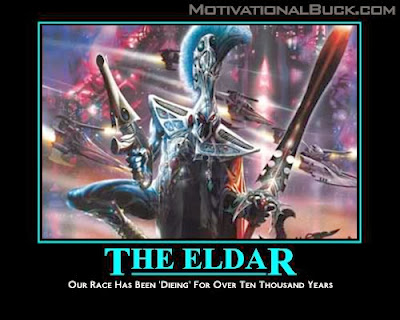 Our local monthly event for October was a DaBoyz GT primer.  I scored max battle points in my first round by tabling my opponent and ended up paired against Nogle (Mike) who also plays Eldar and scored well in his first round.  I was actually really excited for this game as Nogle has done really well with Eldar at tournaments in Erie and Syracuse and I haven't had the chance to test myself against him yet.

Since this was the GT primer, we used missions from the GT packet.  Game #2 had the Relic as primary (20 battle points) and 4 crusade objectives as the secondary (10 battle points) and the standard bonus points for linebreaker, warlord, and first blood (1 battle point each) making each game worth 33 battle points max.  Deployment for this mission was Vanguard Strike.

My opponent had first turn and we had night fight.  This was going to be tricky.  I now his autarch has been key in his previous victories, but I feel my beasts are a good counter.  He's got more bikes for scoring, but I have second turn.  He has double wraithknights and flyers, so I'll have to be careful in planning my movements and picking my engagements. 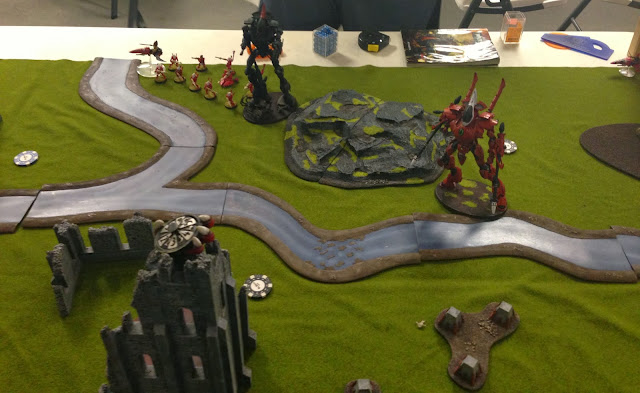 My opponent's deployment.  The black primer WK is his warlord.  He deploys the autarch, guardians, and wraithknights on his front line.  One unit of bikes is in the back corner.  Everything else is reserved with walkers outflanking. 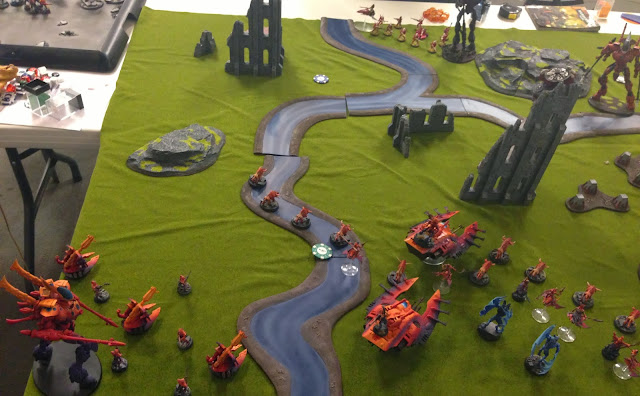 My deployment.  With pre-measuring, I discover that my WK would be safe in the back corner from his first move + wraithcannon shots from his non warlord WK.  Artillery are spaced to the max due the suncannon.  Wave serpents put the central ruin directly between them and the stock WK.  Beasts deploy as a screen with all 3 characters attached.  I spread them almost entirely across my front line so I can snag his autarch if he tries to come after serpents or artillery.  I don't try to seize. 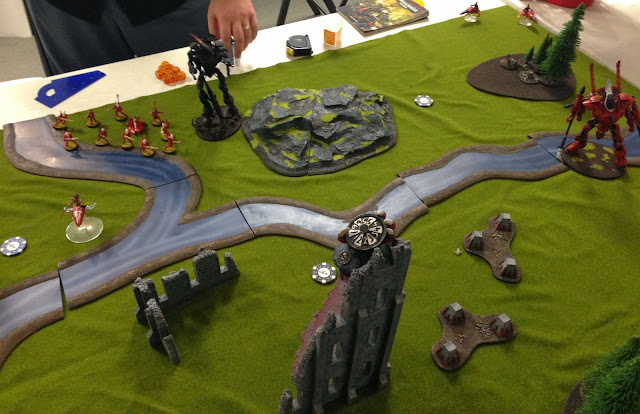 The stock WK flanks to try for a clear shot on a serpent.  Warlord WK pulls back out of range of my own WK's move + cannon range.  Guardians and autarch advance.  Stock WK misses both shots.  Bright lance wiffs.  Suncannon may have killed a beast or two but nothing major.  The moral of this turn was lots of wiffed shooting. 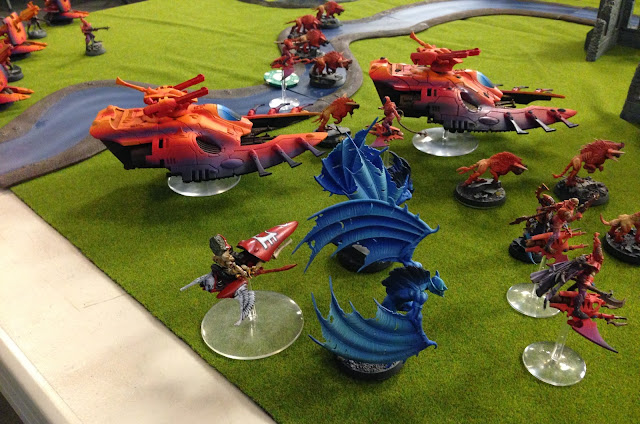 He finishes by turbo-boosting his autarch right behind my beasts. 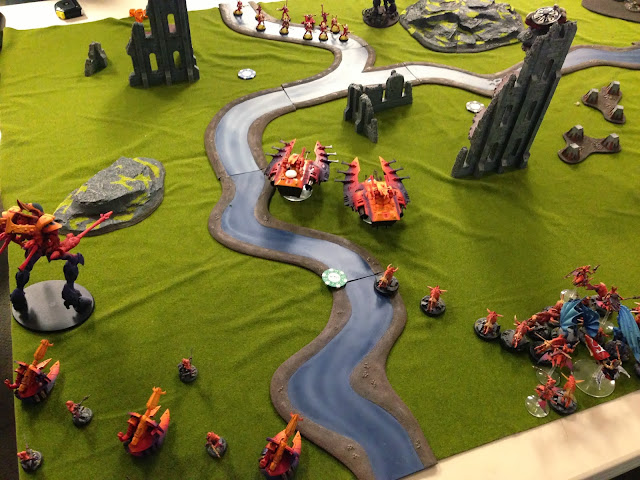 I put invisibility on the lead serpent.  My WK jumps up the flank.  Both serpents advance.  Beasts pull back to engage the autarch.  Serpents take out all but 3 guardians. 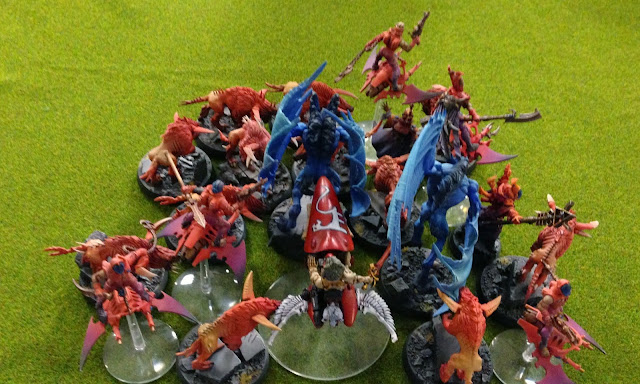 I get really excited for first blood, forgetting he has the phoenix gem.  I take a wound from the firesabre and gain soulblaze.  This will actually cause 6-8 more wounds throughout the game as he made his 4+ every turn.  The beasts easily kill the autarch, he rolls for phoenix gem, and it's a 1!  First blood to me and I avoid the large blast. 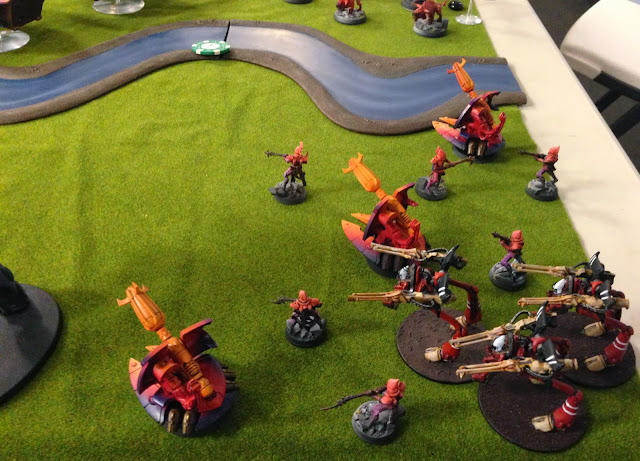 Walkers arrive in the gap where my WK stood. 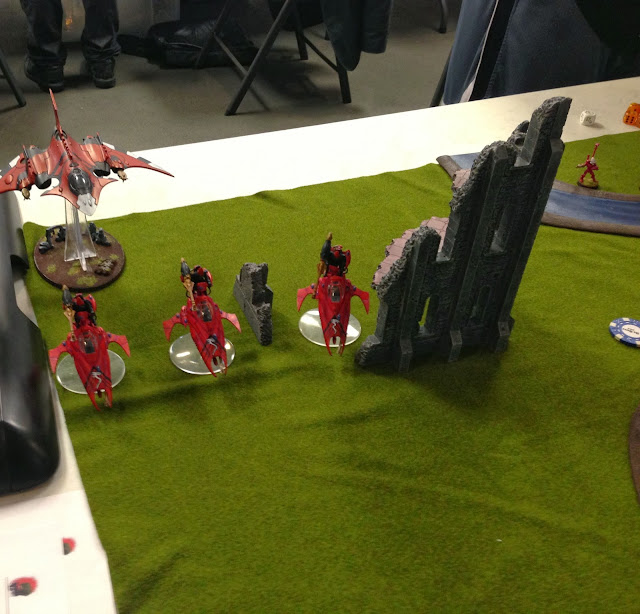 Vypers and crimson exarch line up across from my WK. 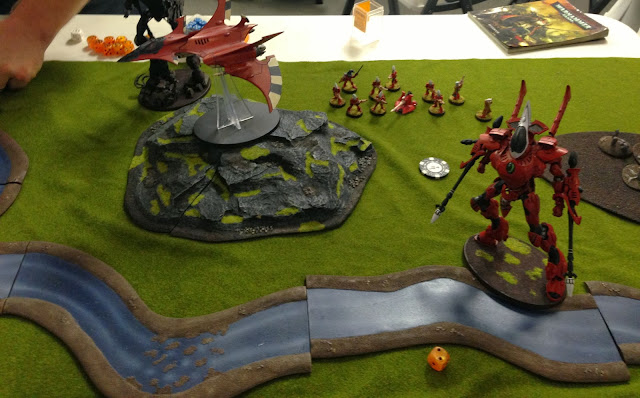 The other flyer also angles for my WK.  Both reserved bike units stay off.  The second guardian unit walks on behind his WK's.  Stock WK jumps back to the left.  Vypers, walkers, and both flyers focus on my WK and put 4 wounds on him.  Luckily, my opponent forgot lances are 36" not 48" so his backfield flyer lost 2 shots.  The non-invisible serpent takes a hull point from a stray shot. 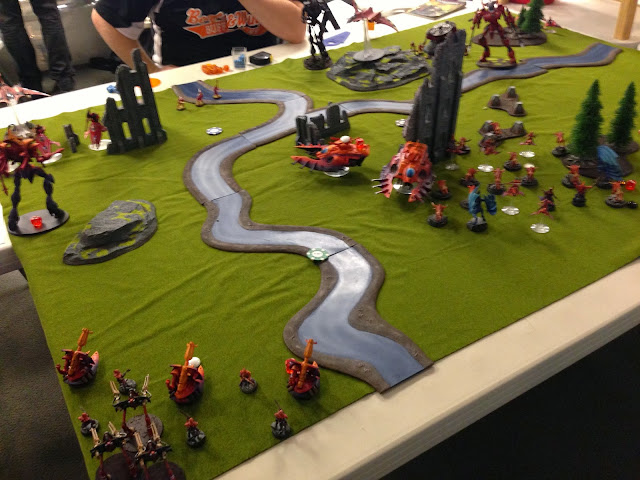 Artillery get guided.  The damaged serpent gets invis.  Beasts push up on the right side of the central ruin.  WK jumps towards his vypers.  I back my non-invis serpent up to the ruin for 3+ cover (holofield).  The invis serpent aims for vypers.  My walkers and bikes stay out. 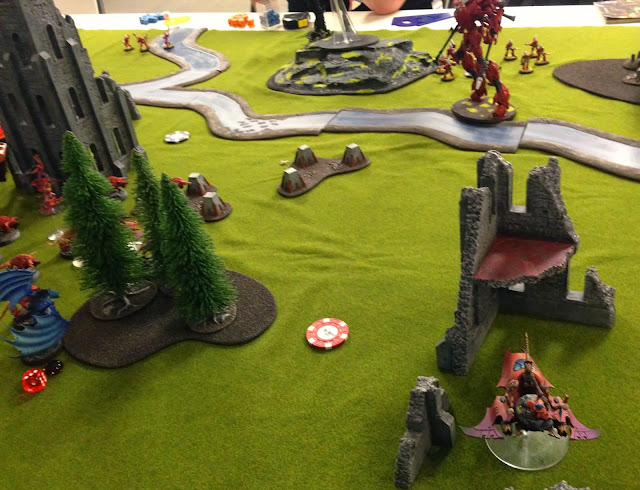 My venom arrives on the right flank using ruins and aims for the stock WK.  The visible serpent is able to take out all 3 walkers with 6 damage results and 0 passed invulns.  The invis serpent and WK cause 5 hull points to the vyper unit.  Venom puts a single wound on the stock WK. 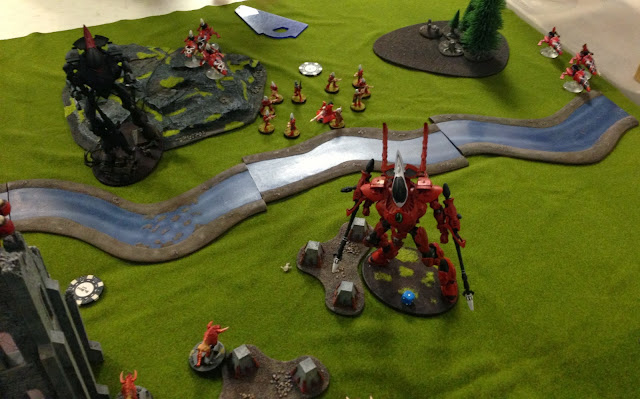 The last bikes arrive.  All the foot units push towards my beasts and the relic.

3 bikes and a vyper aim for my WK.  Flyers all head to my left side and then vector dance to face serpents.  The stock hunter immobilizes the wraithguard's serpent (non-invis one facing away from the relic).  The hunter exarch puts precision strikes on my farseer and takes him out!  Bikes and vyper finish off my WK.  His stock WK attampts to assault my beasts and fails. 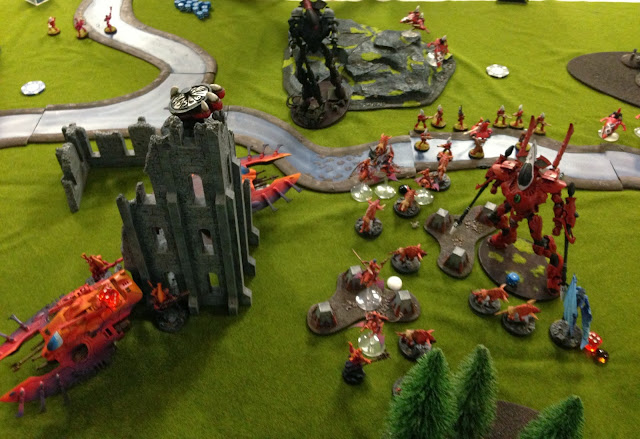 Beasts get invis and push up towards ... everything.  Wraithguard disembark their immobilized ride and get a terrible terrain roll keeping them off the relic so they run up the ruin.  Mobile serpent puts itself between the WK warlord and my wraithguard. 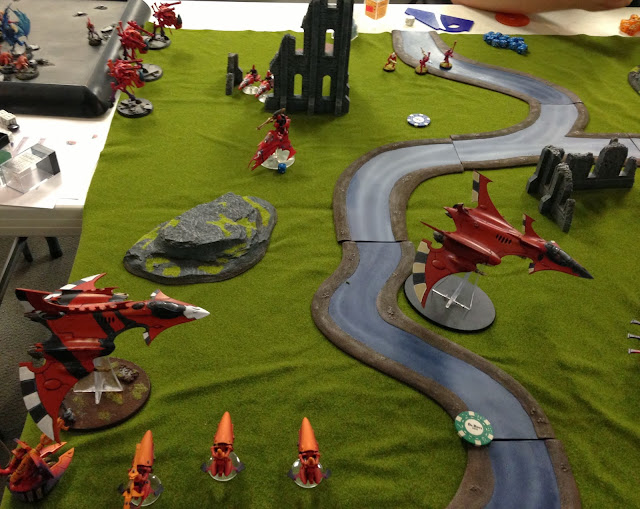 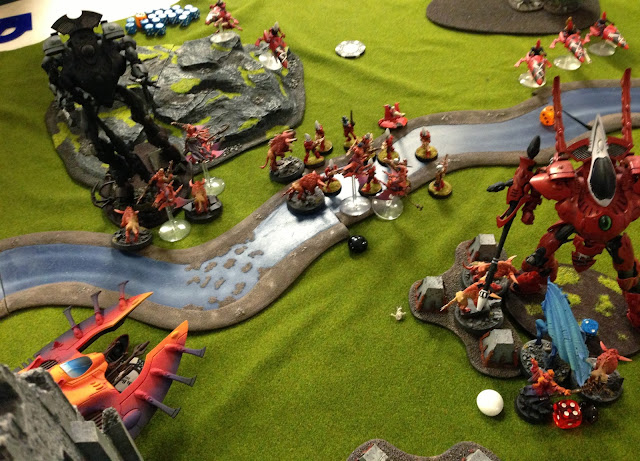 Since I'm invis (makes enemies ws1 in assault), I multi-assault both WK and his guardians.  The primered WK is primary target, I get 4 in base, then the guardians staying in coherency, and I'm able to get models onto the stock WK also.  I take out a few guardians, lose a few beasts, and we lock (fearless from spiritseer with shard). 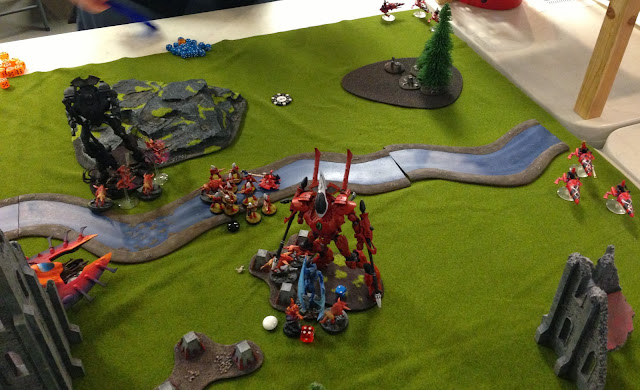 My opponent flies both hunters off the table.  His unit of 3 guardians is pinned from my artillery last turn.  Due to the mass combat, only his 2 bike units are free.  One heads for my side and explodes my venom taking out 3 warriors.  Despite invisibility and 4++ on dogs, I lose a bunch of models in combat.  I also fail my hit-and-run test! 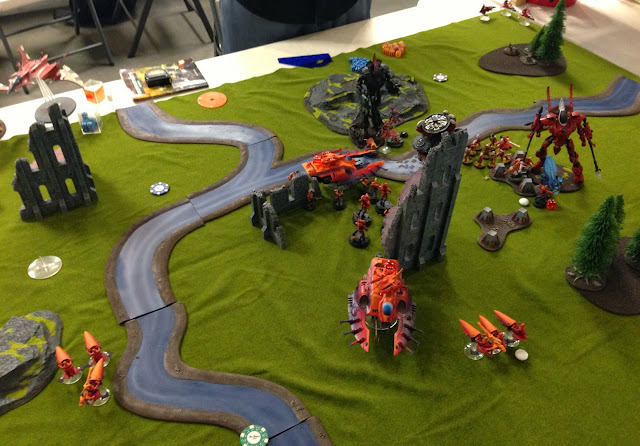 My last bikes arrive automatically.  Beasts get invis again.  Dire avengers disembark and touch the relic in case my wraithguard can't make it.  But they do with a good terrain roll, and a wraithguard picks up the relic.  Left bikes boost into the far left ruin.  Right bikes boost up behind the center ruin.  I continue to lose models in assault, am unable to hurt the WK's, and due to placement his guardians are mostly safe and slowly removing all my beasts. 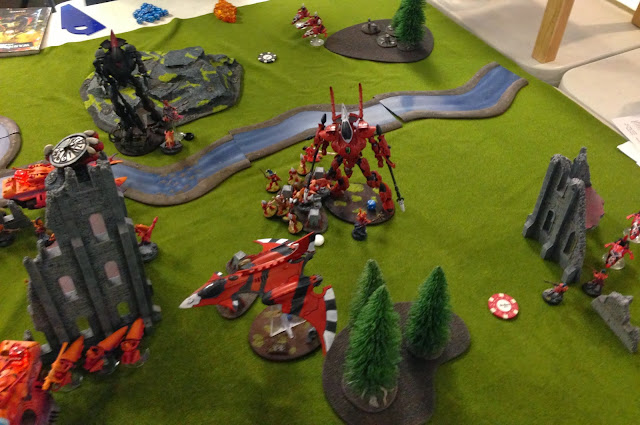 Last turn due to time.  Both flyers come back.  One unit of bikes take the top right objective.  Bikes in the lower right take out my kabalite warriors and park on that objective.  Hunter exarch takes out all 3 bikes behind the center ruin.  Stock hunter takes out a single bike on the left ruin and I pass morale.  I lose my last beasts, my spiritseer gets 1-shotted by the stock WK, and the baron gets swept due to losing fearless! 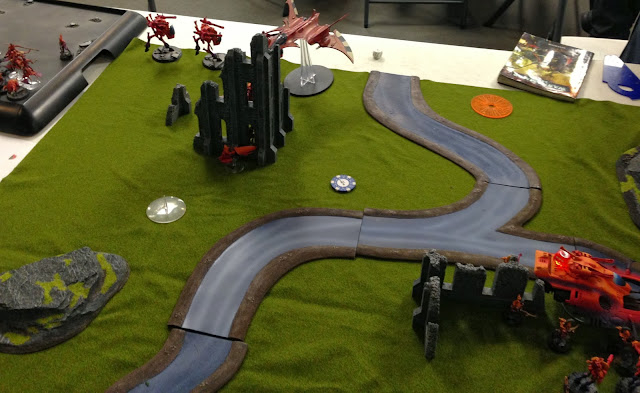 We've got about 2 minutes left so we just roll out the things that matter.  My 2 remaining bikes take the objective by my artillery.  Dire avengers get 6" MTC and a 6" run and make it onto the top left objective.  Wraithguard still hold the relic and try to distort his warlord WK but fail.  My mobile serpent is able to take out his bikes on the back right objective.  The immobile serpent's scatter laser takes out the bikes on the close right objective with some unlucky armor saves.

With that, time is out on the bottom of turn 5.  I hold the relic, objectives 2-0, and earned first blood.  My opponent ended up with only my warlord leaving the final score 31-1 in my favor.

Wow, what a brutal game!  I went into this pretty confident, but could have easily lost if my opponent's opening dice were better, or if he would have passed the 2+ for the phoenix gem.  Tying up 2 WK's and guardians with my beasts was key, but nearly backfired when I failed my hit-and-run test and lost the unit despite invisibility.  The game ended due to time, but at the bottom of 5 it may have been meant to be.  Had the game continued more turns, his flyers would probably have cleared off my scoring units and his WK's would have forced me to drop the relic.  Overall, this is one of my favorite kind of games where the momentum shifts multiple times and the game remains close all the way until the end.  It was just the right amount of luck, list design, and planning and everything panned out in the end.

Something else interesting happened this round.  Every other 1-0 player either had a draw on the primary or secondary objectives this game.  With 64 out of 66 max battle points, I'm headed to the top table with a very comfortable lead.
at 11:56 AM