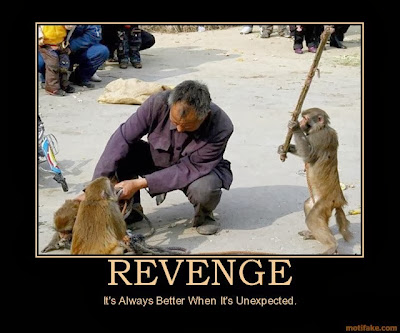 After solid wins in game #1 and game #2, I find myself paired against Dave yet again.  If you haven't been following my monthly tournaments, I also faced his IG in game #4 of the August event as well as game #3 of the July event.  Over the past 2 months, I've been lucky in our games, but Dave really wants some revenge and the third time may be the charm!

Having played Dave 2 months in a row, I know the core of his list and I know he's VERY good with it.  This mission was The Relic with DoW deployment.  Night fight was on and I chose to go first.  My reasoning was to swamp the center with scoring units and hope that something survives to hold the relic.  Looking back, this was a terrible idea.  I've deployed second in every tournament game with this army, and deploying/going first definitely took me out of my comfort zone.

I deploy everything centrally with the wraithknight on the left flank and walkers on the right flank.  The Dark Eldar themed terrain definitely created some unique LoS and deployment dilemmas.  I deployed one unit of bikes to grab the relic and one was reserved. 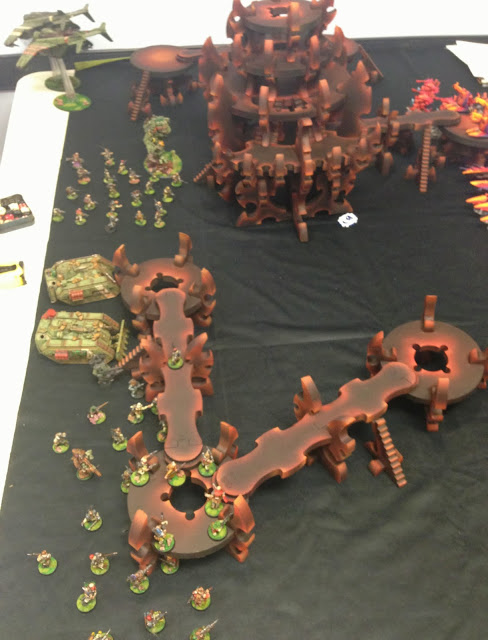 Dave's deployment.  30 man blob is on the bottom.  CCS chimera is next to them, Coteaz's chimera was above.  20 man blob was central with the NDK.  Harker's unit infiltrated under the landing pad in the top left corner.  Both flyers are reserved.  Dave tries to seize twice but fails. 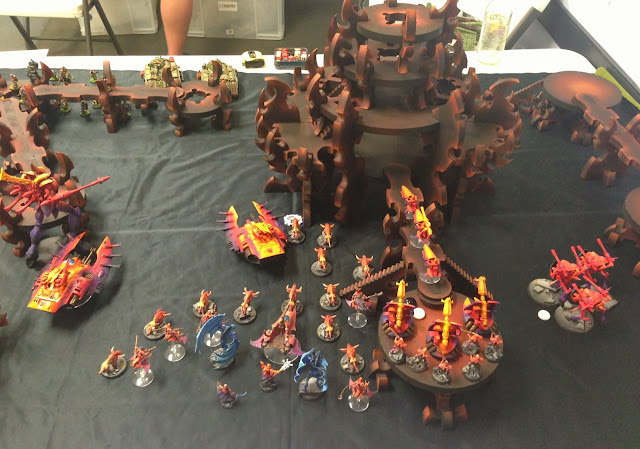 Walkers get guide and artillery get prescience and mental fortitude with a perils on my spiritseer.  I second guess my original choice to grab the relic with bikes and send them up the ramp instead.  I put the wraithguard serpent right next to the relic with beasts.  Walkers push across their flank and wraithknight with the avenger serpent push up the left.  Artillery kills a couple guys from the 2 man blob.  Both serpents and wraithknight target the CCS chimera but the dice and night fight defeat me and I only cause 2 hull points.  Walkers take out a few of Harker's men. 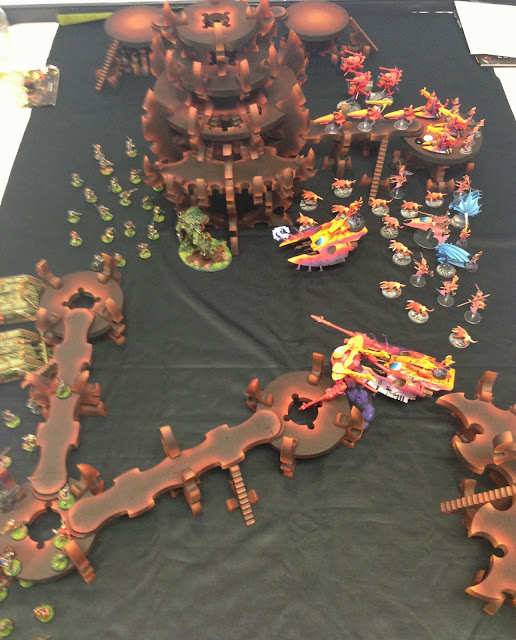 Here's my first "oh shit" moment when the NDK jumps across the middle and I realize I have overextended my wave serpent.  The 20 man blob follows behind but there's not much movement.  I lose half a dozen beasts despite night fight.  Harker's unit takes down one walker.  The 30 man blob puts a wound on the wraithknight.  The NDK makes his assault against my serpent and explodes it with the HoW attack, killing one wraithguard and earning first blood. 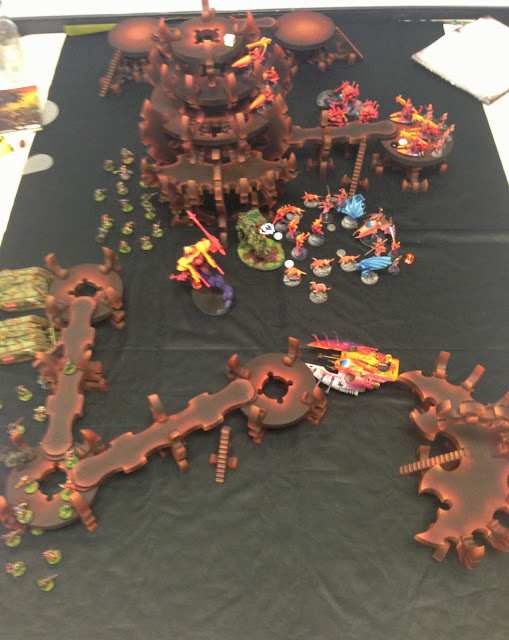 Bikes stay out.  Artillery gets prescience and mental fortitude, walkers get guide.  My beasts are in a precarious position being wrapped around the serpent's crater but I keep them close in case I have to assault the NDK.  Wraithknight jumps over and will try to assault the 20 man blob.  Bikes jump up the big tower.  Wraithguard bingo the NDK with a distort shot.  My serpent wrecks the CCS chimera.  Artillery tries to snipe his warlord and fail.  Walkers kill a couple more of Harker's men.  My wraithknight rolls double 1's and fails his assault on the 20 man blob... 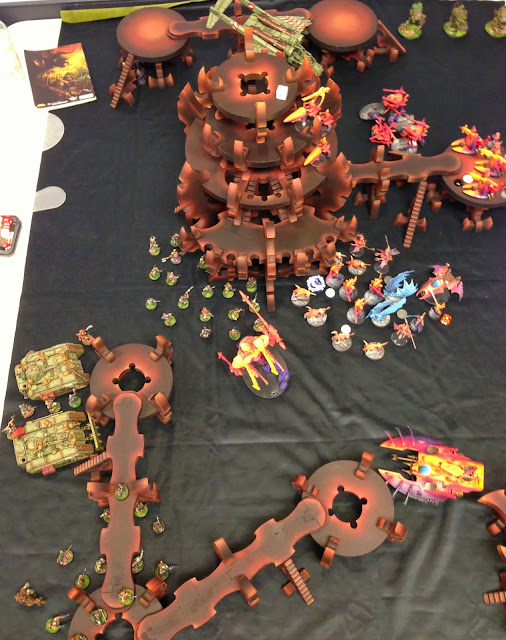 Sentinels arrive on the top flank to go after walkers.  The vendetta also arrives and angles for the walkers.  The CCS walks around their wreck and Coteaz disembarks solo to try and shriek my wraithknight.  The 20 man blob walks aggressively up the middle.  Coteaz gets shriek off and I roll a 16 on my leadership test, losing my wraithknight with one shot.  Combined fire up top finishes off my walkers.  combined central fire kills off all my wraithguard and half of my beasts.  Man, I lost a lot of units this turn... 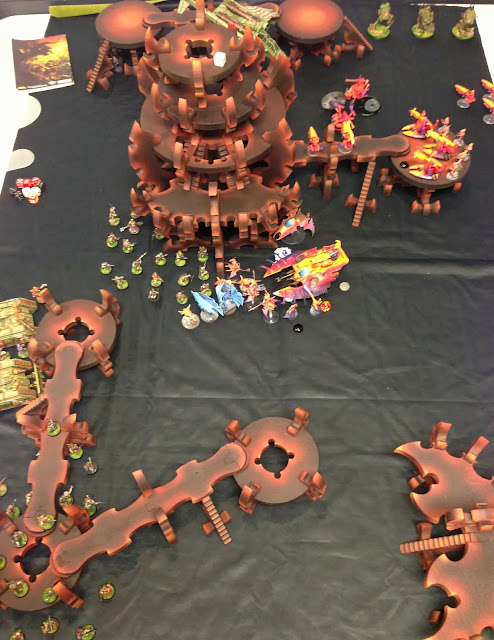 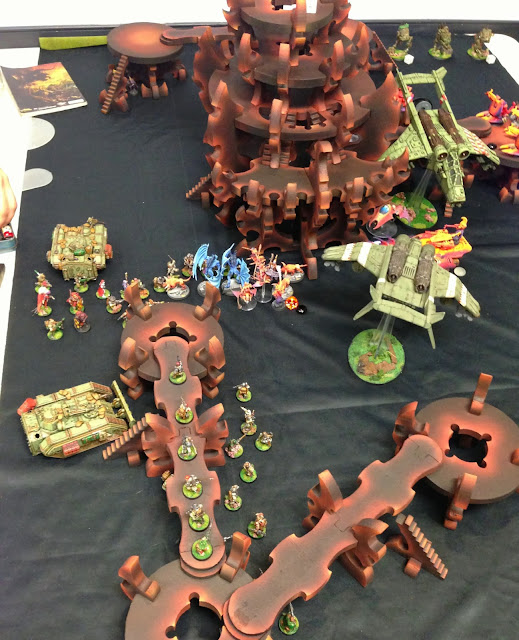 The last flier arrives and both head right for the relic.  We're running out of time and trying to fit in as many turns as possible.  The 30 man blob heads for the middle but autocannons and snipers remain stationary.  The CCS and Coteaz head for the ongoing assault.  The henchmen disembark.  All of his shooting this turn is ineffective... I think I lost 1 bike and 1 wound on artillery.  Coteaz and the CCS make it into assault with my beasts and I take heavy losses thanks to several str6 attacks.  I fail my hit-and-run test...

Rushing very fast now as we're under 15min left.  I hallucinate the 30 man unit and pin them.  Bikes, serpent, and venom remain close to the relic for a last turn grab.  Artillery snipe out another autocannon team from the 30 man blob.  Serpent and venom target henchmen but they pass most of their saves.  Beasts finish off the 20 man blob, but I cannot scratch his warlord or Coteaz.  The Baron goes down to a str6 attack. 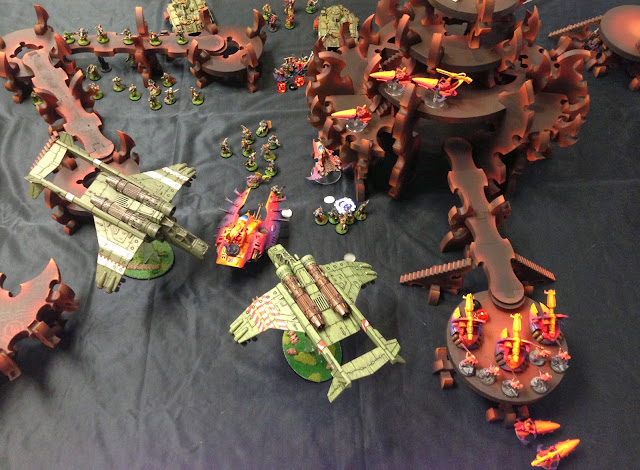 Both fliers hover and drop off their units.  The PCS grabs the relic.  Combined fire takes out my venom, kabalite warriors, and central bikes.  Since his PCS grabbed the relic and we're pretty much out of time, I cannot grab it myself.  I lose the rest of my beasts and both characters in assault to Coteaz's hammer and the Commander's power fist. We decide to sneak in one fast turn.

I disembark my avengers.  All of my combined fire kills the PCS with the relic.  I turbo boost my last bike into a corner linebreaker position.

The vets are more than 6" from the relic so they cannot grab it.  Dave puts all his ling range shots into my linebreaker bike and it eventually goes down.  We do some quick math and call the game there.

Dave got first blood and my warlord while I scored nothing for a 0-2 loss!  Well, I really misplayed this game and paid for it in the end.  If I could do it all over, I would have chosen to deploy second, refused a flank, focused fire on one side of his forces, and use the beasts and WK to keep him off the relic.  My dice were also terrible this game while his were on fire.  Firing both serpents and WK at a chimera turn 1 and only causing 2hp was disappointing.  My artillery landed several wounds on his warlord and he passed all LoS and/or armor saves.  Coteaz one-shotting my WK with a shriek was icing on the cake.  In the end, Dave is very skilled player, painter, and is fun to play against.  After defeating him in round #3 both July and August, I'm actually happy he won this time.

So I tied in overall points for 3rd, but they gave 3rd to Crimthaan since he had more battle points.  I earned "Best Sport+Painting" which was equally cool for me.  Overall I had 3 great games and won a cool award so I left with a smile.

Thanks for following.  Back to DaBoyz GT hobby progress next week.
at 12:10 PM