Posted by Calypso2ts
The inevitable painting countdown is beggining and while I am in better shape than last year, things are starting to get a little tight overall.  The unfortunate part is the really key units I want to use are precisely the ones that need painting (Seekers, Flesh Hounds). 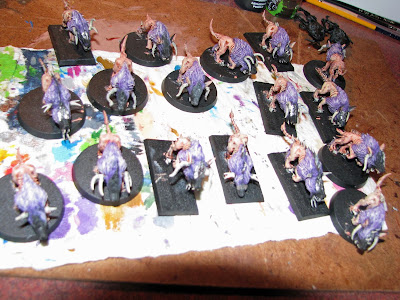 Limited progress on the Seekers so far but I did manage some on the Flesh Hounds.  There is some detailing left in the face, but I am going to leave them as is to get at least a minimum standard on the rest of the Hounds and the Seekers.

I have also decided to be a glutton for punishment after the GT primer this week at Millenium (Battle reports to come).  I knew I had some problems dealing with 2+ save models before, but it really came out in these games.  The Daemonettes and Seekers can take down 2+ saves, but they are typically whittled down first and getting into combat to free a trapped unit of Hounds only to be shot the next turn was becoming frustrating.

I also realized that I was very much relying on Fateweaver to bring in wins.  Fateweaver is an incredible force multiplier, but his vulnerability to S10 and lack of defenses really made me ask the question: Is Fateweaver worth 34 wounds?  That number is how many Flesh Hounds I could replace her with.  While the ability to reroll one dice a turn is addictive and can twist games, I wonder if I would need to twist the games in the first place if I had brought more bodies to the field.

I had some discussion and feedback on Fateweaver here and I think the best argument was that I use my Slaanesh Princess for Fateweaver, and it is a cool model that is a plus when it comes to my paint score.  I eventually want to get away from her though.

I was also disappointed in the Skullcannons output this tournament.  They have potential, but I just did not run into many Aegis lines (an artifact of the Eldar Serpent Shield?) and when it comes to assault firing a large blast to get grenades leaves potential to miss my charge.  On top of that, the units I wanted to charge would be obliterated without the Skullcannon shot and it felt wasted using it for grenades.  Instead I fired at transports, infantry in the open while trying to keep the Skullcannons from giving up first blood - which was difficult given it is open topped.

As such, I have decided to introduce a ton more painting into my life - but at the benefit of having a much better time at the GT.  Here is what I am looking to run:

I like the AP 2 that this list brings a lot more than the previous one through the Grinders and it also has a lot more offensive potential with the dual units of hounds.  I am missing out on the Grenades and Psychic defense that I had through the Fiends - but they just cannot fight their way out of a paper bag.  This list is also very close to the one I have been playing, so I have a better sense for the match ups overall.

It is weak on troops, but the Grinders can baby sit the troops a bit as they advance forward and I plan to protect them by keeping them in reserve.  Overall this list has 64 T4 wounds and 32 T3 wounds on its assault units (including Daemonettes).  I still need to be careful against 2+ saves, but I have a little more flexibility.  I think I also need to adjust my play style and use the Daemonettes more aggressively to deal with those targets.

I think it is doable, but I will focus first on the Seekers and then the hounds from there.  The real challenge will be all the basing in 4 weeks - it is going to be an extremely busy month.  Here are some WIP pictures of the Hounds and Seekers.  This represents 3 weeks of work going from bare plastic on all the models. 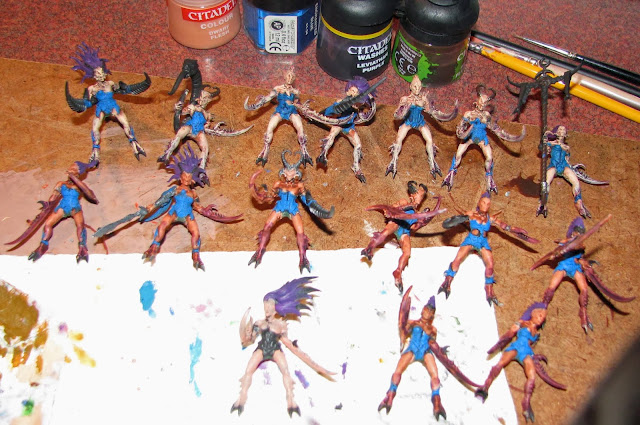 This shot has 7 with their final skintones - the pale flesh color - and 8 ready for a drybrush.  the last needs a wash still of Leviathon and Rheikland Flesh. 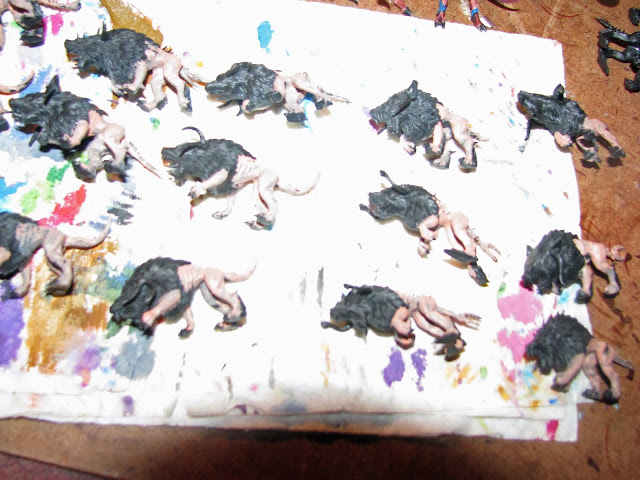 First coat on the dogs of Dwarf Flesh - it will be washed and this packs manes will be blue to match the armor on the Daemonettes (and differentiate it from the Purple Pack. 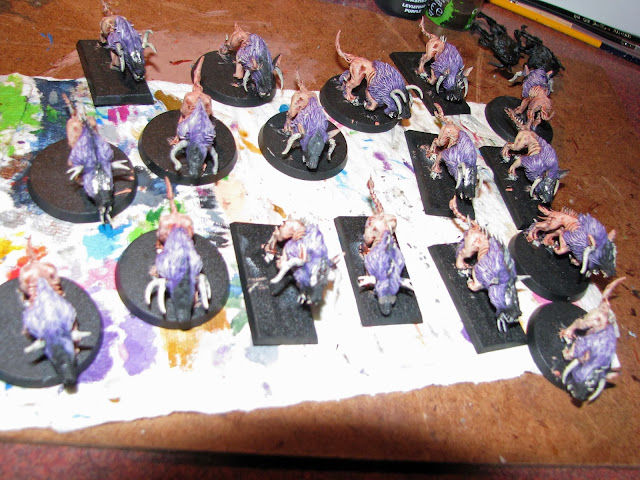 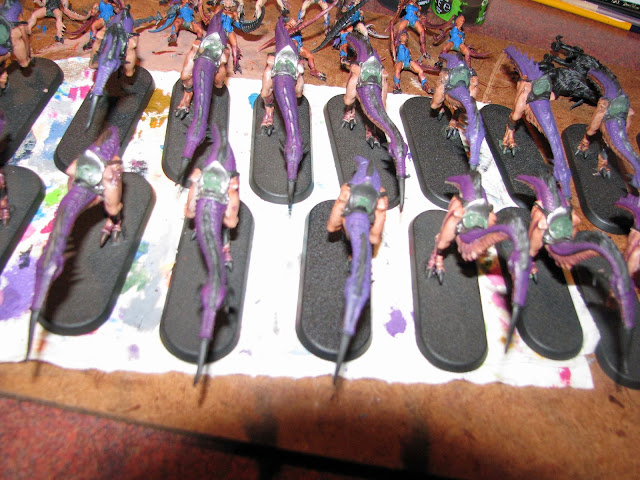 So many seekers to paint!  I need to drybrush the flesh to a lighter shade, hit the saddles with Boltgun/Mithril and the Tongues with Scab/Blood Red.  Afterward there are some random spikes to paint Bleached bone.

Also notable is that I do not have bases for any of these! I make my bases as a wood floor from birch drink stirrers - and I have a couple to do still.  I think I can make the 4 week deadline, but I need to put in time each day, which explains why I have had so much trouble posting.  Back to the painting!