Posted by hyv3mynd
Well, I was going to take things easy after DaBoyz GT, but I'm weak when it comes to peer pressure.  Millennium Games is one of our 3 local shops and they're running a Painting Escalation League starting next month.  My original intent was to expand my compy Grey Knight collection so I can make a really hard list.  However, GK fever is peaking around here and 3 out of the 14 at last week's RTT were GK and I know several more stayed home.  To top it off, 3 of my peers who are interested in playing on DaBoyz ATC team are working on GK armies so I figured my best chance is to create a new option for myself.  Plus, I had $75 in store credit burning a hole in my pocket from taking 1st at last week's RTT and a really motivating theme I've been mulling over for a Dark Eldar army.

Something that came up during the appearance judging for DaBoyz GT was conversions.  I received a lot of compliments on my GK army, but when the judge came around I didn't have any conversions in the army.  At the GT, I tied for 4th in appearance and probably would have been in the top 3 with conversions.  I'm always pushing myself on all fronts from hobby to tactics execution so I want an army that has conversions so I can push into the top 3.

I've also been browsing through CMON and some of the inspiring artists there.  I really want to take a break from power armor and force weapons and want some larger surfaces to work on my zenithial highlighting.  Weathering powders really intrigue me also so I'm going to try to work in several new techniques.

If you read my hobby articles, you know I don't follow the mainstream with army builds or appearance and this will be no exception.  My theme for this army will be "Malys's Dark Circus".  It will be a haemonculus coven themed like a travelling circus/freakshow for Lady Malys's personal enjoyment.  I think there's a lot of potential with grotesques which I never see on the table so I'm going to try and make them work.  I'm going to use webway portals, harlequins for portal deployment, and Lady Malys for redeployment shenanigans and to make the grotesques immune to psychic powers.

The final key to making this work is the plastic fantasy ogres.  The new finecast grotesques are $20 each which will not fly on my budget, but 6 ogres come in a box and the talos kit comes with 5 extra heads.  Here are my first conversions before I patched some spots with green stuff. 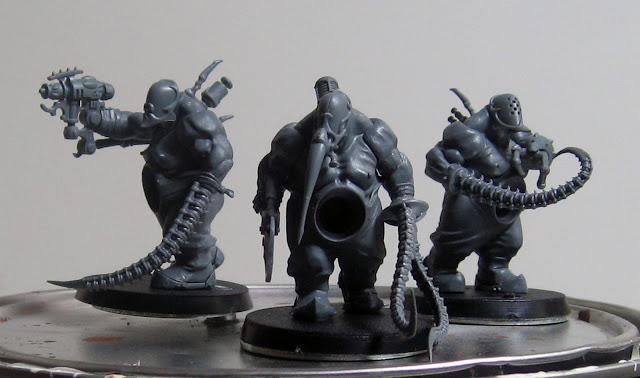 So these are just ogres and talos bits.  I'm going to leave the hole in the center for a secret surprise to come later.  I gotta give props to my friend Doug who turned me on to Krylon Primer.  Keeping with a low budget theme, I needed a new alternative to the $14 GW primer.  Krylon white primer worked great and comes in at $5 a can at Michaels.

I'm also starting my first official foray into airbrushing.  I have a lot of experience with the tool as my degree is in Special Effects Makeup, but I've never tried something on this small of a scale.  I experimented a lot with pressure and paint viscosity and came out with a couple tests I'm happy with.  Again, I'm using $1 per bottle Folk Art paints also from Michaels. 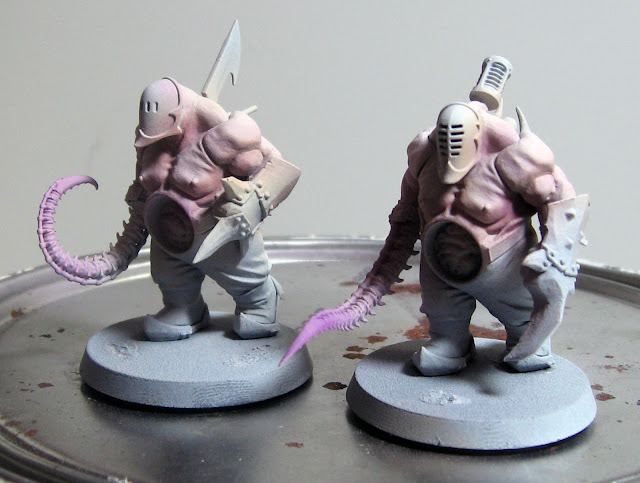 These guys were based with Tapioca, then shaded with Honeycomb, Ballet Pink, Heather, and Violet purple to hint at raw and bruised flesh.  After that was done, I airbrushed from the top with Tapioca again as a zenith highlight color.

For the next step, I used a similar technique used in this tutorial for shading and creating dark areas in the flesh. 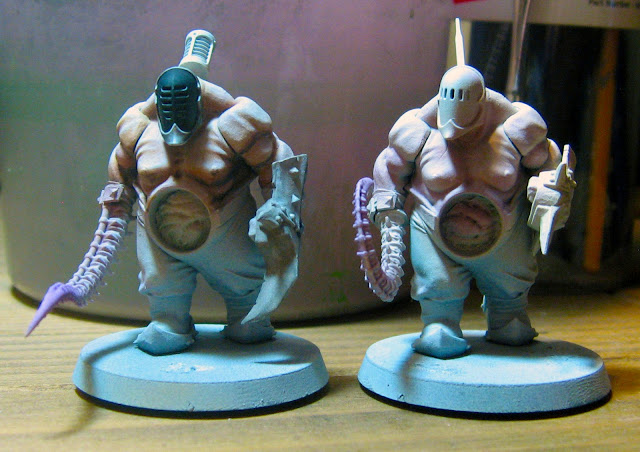 The lighting washed the pic out but it's a WIP pic and I didn't want to set up a proper shoot.  The model on the left has been shaded with washes of Honeycomb, Dark Brown, and Pure Black.  I've also done a non metallic metal on the mask trim and some highlights on the grill.

That's all for now.  The painting escalation league starts December 6th and I need 500pts painted by then.  I'll be blogging my progress and experimentation with new techniques so follow along and thanks for reading!
at 8:44 AM