Posted by hyv3mynd
After a minor victory in round #1 and a major victory in round #2, I knew I was in in for some tough matches.  As soon as I saw the pairings, my fears were confirmed.  I would be playing one of USA's ETC players, Paul M. and his mech guard.

The mission was "Pokerface".  Six objectives, three evenly spaced 12" up from each long edge.  Each player secretly ranks three of the objectives to be worth 3, 2, and 1 point.  During turn 4, each player reveals their objective rankings.  Primary victory is scoring more total points of objectives you ranked for yourself, secondary is a "poker hand", claiming a pair of objectives worth 3, 2, 1, or a straight of one of each.


This was pretty much a worst case scenario for me.  Out of all the armies out there, guard is the one I have the least amount of experience against.  I don't even know how all their units work and I was asking Paul tons of questions as we deployed and played to make sure I didn't miss anything.  Plus, his army had 9 vehicles and a lot more scoring units than me so I'm at a distinct advantage list-wise.  Did I mention he's been to Europe twice on our ETC team?  Yeah, I went into this game playing to draw and hoping to get any points I could manage.

Deployment was DoW.  I won the roll and had to choose to get off the first shots or go second for contesting.  I seriously doubted I would have any vehicles left against Paul's 11 lascannons, hydras, manticore, plasma, and melta guns, so I decided to go first and try for a minor alpha strike.  I deployed one combat squad in cover mid table with the librarian and servo skull to push Paul back and hopefully use for vortex of doom shots.  The other half of the combat squad was on my right in cover and on an objective.  FWIW, I ranked my central objective 3pts, my left 2pts, and the one in Paul's DZ left side 1pt.  Paul deployed a 20 man blob with the commissar on the left and a lascannon team on the right.  Everything I have left is coming on turn 1, the same with Paul except his stormtrooper unit which will deep strike.

I begin turn 1 by bringing everything on in the center and left side.  NDK jumps up on the left.  My halberd squad moves up behind a hill in their razorback.  Chimera moves up with the rifleman behind it.  Storm raven goes flat out for cover. 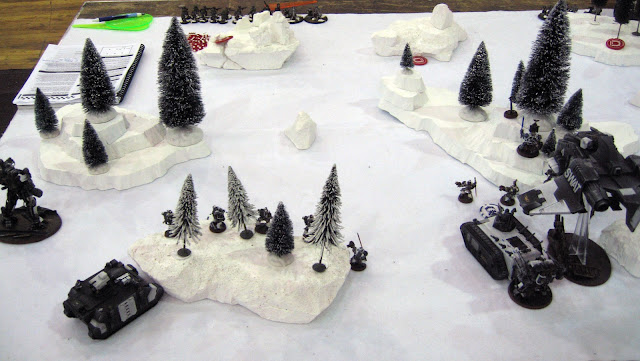 Paul brings on his army spread across his table edge.  The colossus comes in on the left behind a hill.  In the center, he moves on a lascannon team and 3 chimeras with the CCS and two plasma platoons.  All 3 chimeras pop smoke.  On the right, both birds fly on going flat out.  The PCS is in the valkyrie and the vets are in the vendetta.  In the right corner, he drives on the hydras and manticore behind the forest. 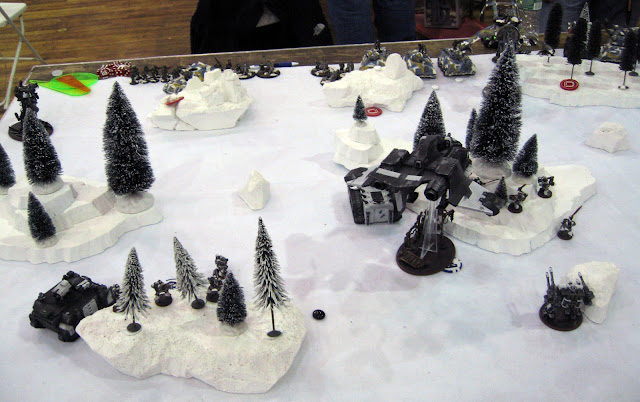 My turn 2 begins with a shunt move by my NDK to burn some guard and apply pressure to his weak flank.  Razorback moves up 6", combat squads shuffle up in terrain.  Chimera moves up 12" and smokes.  Storm raven moves up to put the tallest tree between it and the hydras.  In shooting, my NDK burns 7 guardsmen down from the big blob.  My razorback ends up being 1/2" short from insta-killing some lascannon teams.  The rifleman, storm raven, and psycannon are able to shake both skimmers and the manticore.  Not a great turn, but at least I suppressed some of his shooting.

Paul's stormtrooper unit arrives right between my storm raven and rifleman.  He goes flat out with both skimmers up my right flank.  His blob heads towards my NDK. 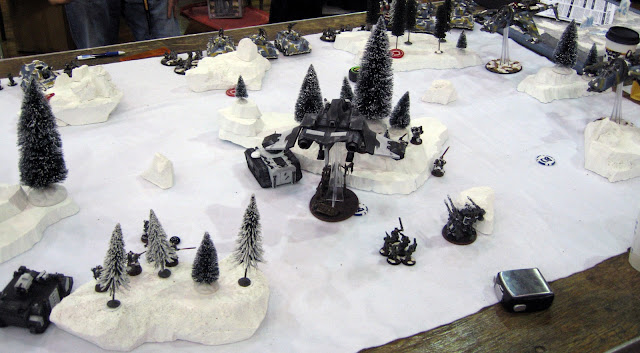 His storm troopers explode my rifleman with melta shots.  The rest of Paul's shooting dice are depressingly bad (for him not me heh) all those lascannon and hydra shots blow off the lascannons from my storm raven.  Between his dice and my cover saves (some 3+ from shrouding), I only lose a marine or two.  He assaults the NDK with his blob and I kill a few but we lock thanks to the commissar.

It's now the top of turn 3 and we have about 60 minutes left so we're starting to play as fast as we can.  I push up the henchman unit and jump them out to draw fire and maybe melta something.  I move the storm raven towards the left and get the terminators out, but leave my techmarine inside. 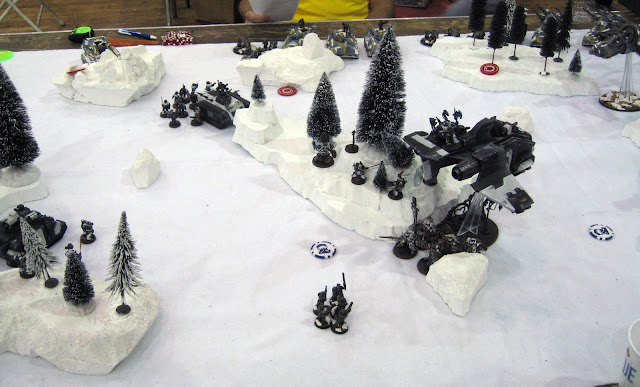 Here I have some huge targeting priority issues between the skimmers on my flank and storm troopers in my backfield.  I shoot the combat squad on the left at the storm troopers and they go to ground, making almost every cover save.  I decide to ignore them with the rest since they can't do anything next turn.  The rest of my psycannons and storm raven are able to suppress Paul's skimmers again and I think I took a lascannon off his vendetta.  Up top, I'm able to kill 2 lascannons from the lone team, but he passes morale and stays on the table.  My techmarine repairs my storm raven's lascannons.  In assault, the NDK kills several more guardsmen but we remain locked.

It's now Paul's turn 3 and he brings up his valkyrie and dumps out the vets in front of my storm raven.  Two of his central chimeras move up towards my henchmen.  He pulls his vendetta back and dumps out the PCS to star moving towards his right flank objective. 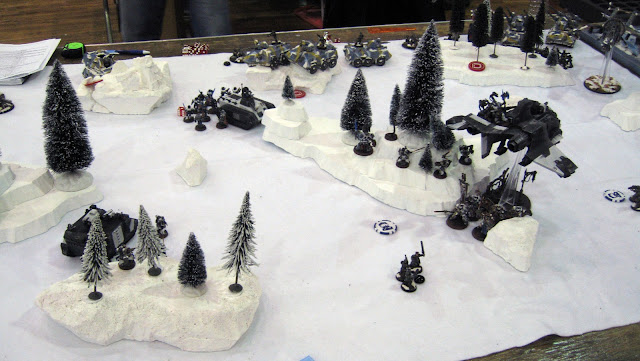 I lose a few henchmen in the firefight up top.  My storm raven survives another ridiculous amount of fire, but he blows off my lascannons again and shakes it.  Random fire also drops one marine from the central combat squad and one from the left.  Here we have about 30 minutes left at the bottom of turn 3.  Paul gives me my turn and I move a couple units when he realizes he has forgotten to fire every embarked unit in his chimeras (lots of plasma).  I offer to let him go back but he declines and eats his mistake.

Now I realize I've forgotten fortitude on my storm raven and have to eat it also.  Running out of time and fast-playing had us both making a lot of mistakes this game.  I flat out my storm raven to contest his right objective.  My chimera moves up 6" to contest his central objective.  Henchmen aren't in position to assault anything valuable so I stand still to fire some heavy weapons.  Terminators go after his vets on my right and razorback moves up and dumps out the halberd squad to get a couple more psycannon shots off.

In shooting, I'm able to finish off his vets on the right, kill 1 storm trooper (went to ground again), explode his valkyrie, and wreck both chimeras in his center (he was failing a lot of cover saves).  NDK is still beating down guardsmen but he's making his morale tests every time.

It's now Paul's turn 4 and we will barely have enough time to play a turn 5.  He doesn't move much, only moving the disembarked units to gun down my henchmen. 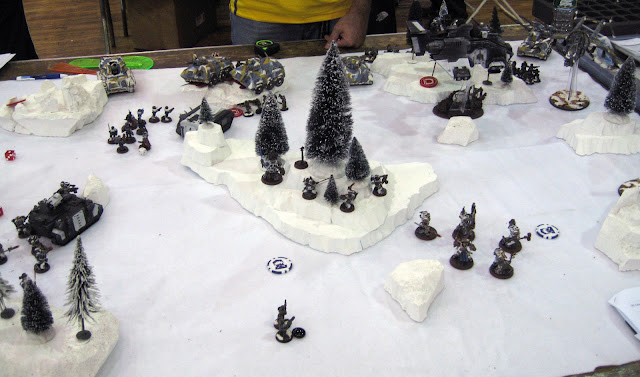 I lose several henchman in the firefight.  Against all odds, my storm raven survives his remaining lascannon and hydra shots.  This was the last picture of the game due to time constraints.  My NDK finally finishes off his blob and heads towards the center.

My turn 5 will be my last.  The NDK can't reach the center so he heads towards the colossus.  I string my terminators between the right and center objectives.  I jump the halberd squad back in their razorback and move 12" straight for the objective on the top left in the terrain.  I make a big mistake here and tank shock one of Paul's disembarked squads on his objective.  He passes morale and hits me with a DoG melta, exploding my chimera.  I should have just left it in contest range, oh well.  My NDK explodes the colossus.  My henchmen assault the other disembarked unit and I win by several, but he makes his morale test again.

Paul makes his final moves, contesting the objective on my right with his vendetta going flat out.  His shooting finally pays off and he explodes my storm raven and snipes my techmarine who went to ground on his objective.  My henchmen strike, but are unable to kill one last guardsman who passes morale and keeps me from consolidating onto his central objective.

The game ends due to time with each of us holding our own 3pt and 2pt objectives.  My razorback ended up being 1/2" away from the top left objective.  We draw on primary and secondary, but there is no draw scoring on the secondary, so we walk away with 10 battle points each.  This was a really fun game, mainly due to the camaraderie Paul and I had.  Paul's dice were uncannily bad during the first few turns and we both forgot key things when we started fast playing due to time running out.  I do think I could have eeked out a win with one more turn as my NDK would have rampaged on his central units and my razorback would have claimed the top left objective.  Of course, Paul still had his hydras and manticore so he also could have dropped some of my scoring units.  Either way, I walked away with more points than I thought I would get and it's always a pleasure to play one of our ETC members.
at 10:24 AM