Posted by hyv3mynd
My army list and game #1 can be found HERE.

My second opponent of the event was Eric and his CSM.  I was a bit relieved to see a CSM list after a game against GK and knowing that GK and BA were the most popular armies at the event.  However, I'm coming off a minor victory so I know Eric is also and I don't want to underestimate him or the codex.  Coincidentally, Eric got my top vote for favorite opponent as he was really chill and our game was relaxed.  My wife and friend showed up just after we started and were able to sit, chat, and share some beers while we rolled dice and moved our soldiers around.  The whole game was relaxed and enjoyable.

The mission was "Ear Collectors" which featured a kill point mechanic where each unit earned a marker for killing another unit.  If a unit holding an "ear marker" was killed the unit destroying it earned one market plus whatever the dead unit had earned.  Normal kill points were the secondary objective.  Deployment was spearhead.


Eric won the roll-off and elected to go first.  He chose a table quarter with a large wall to hide most of his army behind.  He deployed fairly defensively with only the havoks, oblits, and dread out in the open.  He reserved the spawn and will deep strike the terminators.  Everything else was behind the wall. 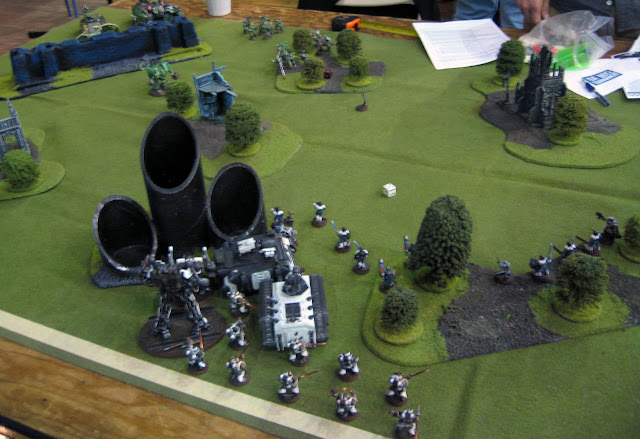 I didn't want to lose my storm raven on the first turn so I reserved it with the terminators and techmarine.  I crammed as much as I could behind my LoS blocking spires and hoped that shrouding would help.  I put the librarian with the henchmen and strung them out to maximize firing angles with the melta guns on point.

Eric sends up the dread and everything else stays put and fires.  His shooting either misses or gets shrugged off with 3+ cover. 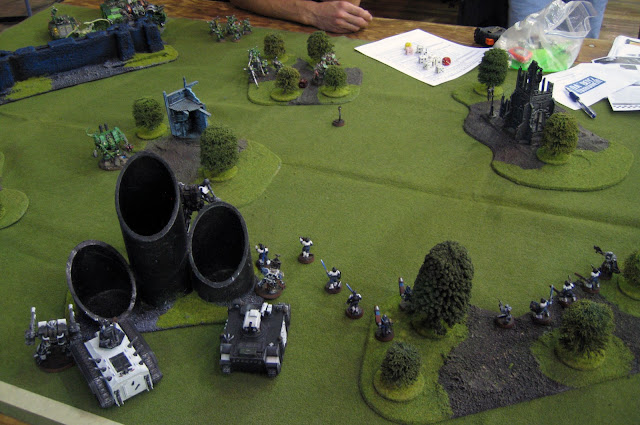 I shuffle over my rifleman, jump my 10 knights into the chimera and shuffle it over also.  The NDK jumps up in front of the pillars hoping to draw the oblits off my vehicles.  My shooting is only slightly more effective as I immobilize Eric's dread, kill 1 havok, and 1 oblit.

I'm expecting him to push forward, but he holds back.  This mission heavily favors late game kills and he may also be waiting to see where the storm raven comes on.  He is able to explode my razorback giving the oblits 1 ear and kill 1 henchman. 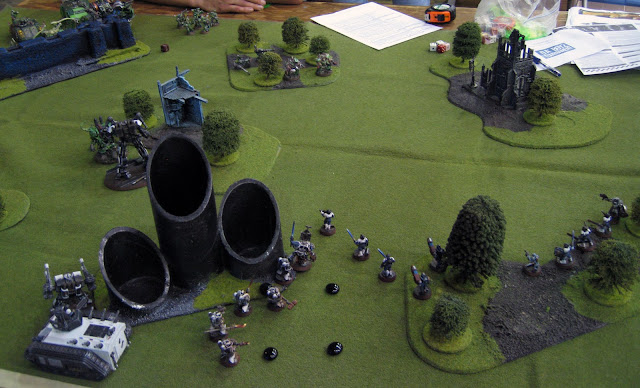 My turn 2 arrives without the storm raven, which I guess is OK for now.  I send the dread and chimera more towards the left and keep them covered from the oblits.  I send the NDK up to finish off the immobilized dread.  My henchmen kill another oblit.  The chimera and psycannon on foot drop 2 more havoks, leaving only one autocannon.  My rifleman blows the battlecannon and reaper off the defiler.  In assault, the NDK wrecks the dread and earns an ear.

Eric's shooting is severely crippled at the top of 3 so he starts bringing up the backfield units.  Most of his army is still behind the wall but repositioning for a rush.  The defiler runs around to lead the charge.  He's able to put two wounds on the NDK and kill another henchman, which will force me to move the unit since I spread them out so far that every casualty puts me out of coherency. 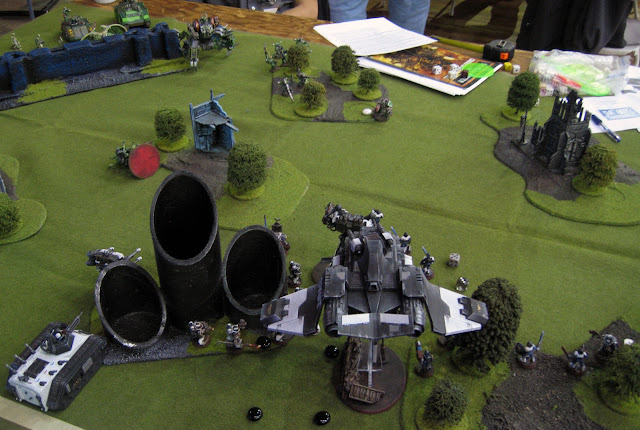 My storm raven arrives at the bottom of 3.  I could go flat out towards his wall, but he has those raptors with melta that are discouraging me.  Instead, I see one autocannon and one oblit left for long range firepower and decided to bring it in safely away from melta and plasma so I can make a big move next turn.  I bring the NDK back towards safety because I don't want to lose any ears.  The storm raven is able to snipe the oblit (and earn 2 ears), but everything else I have cannot take down the lone autocannon havok.

Eric's terminators arrive close enough to henchmen to flame a few.  His jump infantry and prince finally commit and come over the wall.  Believe it or not, his one lone autocannon havok explodes my storm raven and earns 3 ears. 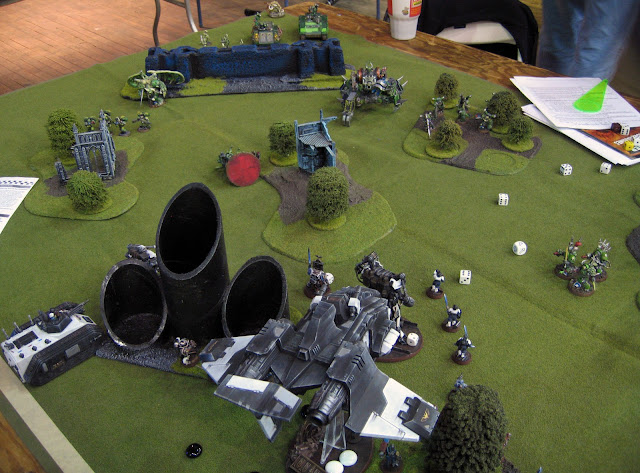 I pull everything away from the advancing prince and raptors.  I pour a lot of firepower into that lone havok and the 5 man strike squad gets the kill and 4 ears.  The dreadknight and henchmen are unable to kill the terminators with shooting and I decide not to assault them with the NDK as I may not be able to consolidate far enough away from the advancing plasma squad and he only has 2 wounds left. 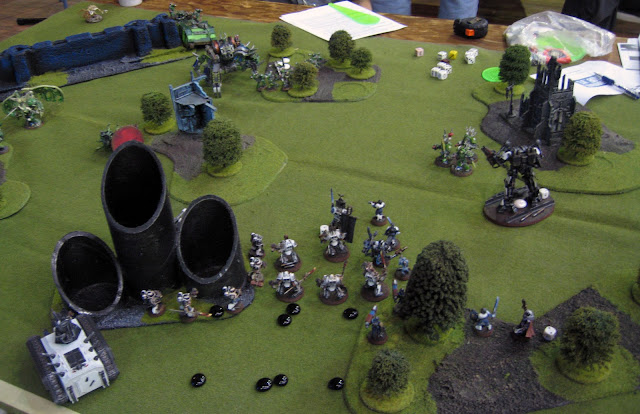 Eric rushes everything forward again.  His terminators assault my henchmen and kill a bunch, but stubborn keeps me in the fight. 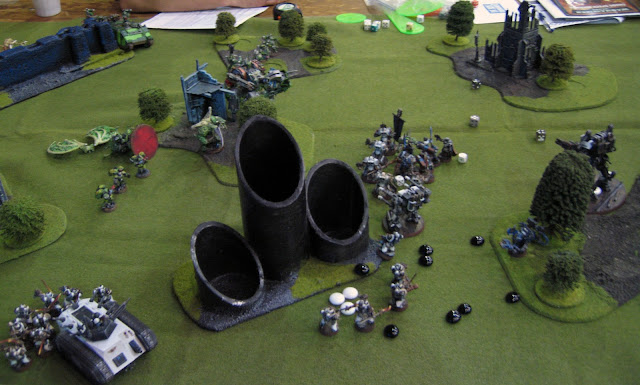 I finally unload the 10 man squad into firing position on the left.  I pull back the 5 man squad that has 4 ears to hide them.  Terminators head up to save my henchmen.  My shooting is able to kill two raptors and put a couple wounds on the prince, but both units survive.  The rifleman finishes off the defiler.  In assault, his terminators kill my inquisitor and claim an ear, then my librarian kills the last terminator and grabs two ears. 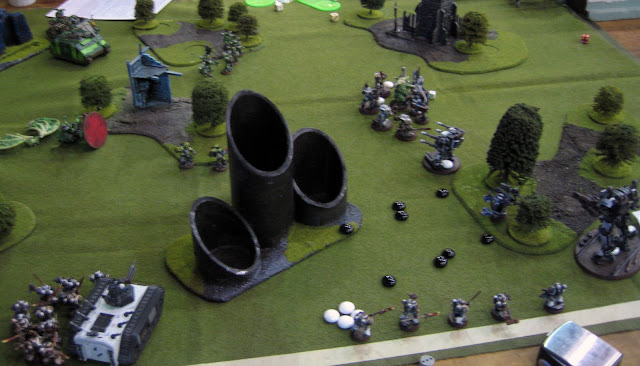 I'm able to shoot down the raptors and we call it there.  I have a bunch of ears and he doesn't have enough shooting or speed to run me down.  I had ears and kill points for a 35pt massacre.

This was the most fun game of the GT for me.  We had some real back-and-forth turns and epic moments, especially his one autocannon shooting down my storm raven and the final ear swaps.  Eric was a great sport and for one game, I didn't feel the hardcore pressure of a competitive event.