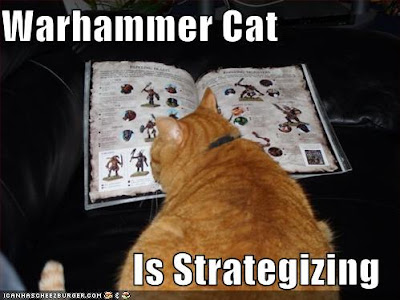 Tomorrow is the final open tourney at one of the local shops before their invitational finals in December.

The format:  1850pts, no special characters, all units in the codex are 0-1 except troops, 2 dedicated transports max.

It's pursuing a similar goal as DaBoyz GT, but with hard limits instead of a comp rubric.  As such, my GT list is fully legal, but I wanted to make a few changes based on things I didn't care for in my original list.  Here's what I'm taking:

So I dropped the techmarine and personal teleporter on the dreadknight for a venerable dread and hvy psycannon on the NDK.  I wasn't a big fan of the psykotroke grenades on a techmarine as half of the possible results are usually useless in any given situation.  Without a true hammer unit and without an invuln save on the techmarine, I was lucky if I used the grenades in half of my GT games.

I love the teleporter on the dreadknight, but it created some issues for me.  I usually overextended him and lost him early.  The lure of shunting first turn to burn something proved too strong for me often and was never a good investment.  Plus, it was too difficult keeping a 235pt unit alive for late game contesting when it's equipped with a short range weapon.  I decided to leave him on foot and give him a longer range gun which I'll try to synergize with my servo skull.

With the extra points, I added a venerable dread to ride in the storm raven.  This gives me more anti-mech with a multi-melta and str10 in cc.  One of my worst games in the GT involved 4 turns of everything in my army shooting at a land rader (including the melta henchmen and vortex of doom), so I figured the second dread would be more effective than the techmarine.

This event will be a good one for those of you who like seeing non-spammy armies and I highly recommend it if you're reading this and in the area.  I've already qualified for the invitational, so if I place tomorrow my spot will pass down.
at 8:54 AM