Posted by hyv3mynd
This team event consisted of 4 players per team with an ETC style pairing system.  Each player must use a different codex and there was no comp for this event.  I didn't get enough practice time with my GK's as I was painting so much so I decided to bring them even though the list was designed for comp.

My team is going into round #3 with one huge win (71/80) and one huge loss (11/80).  We need four massacres at this point to even place.  Our opposing team was the "Beaver Club" made up of several guys from Canada.  I don't remember all the lists, but I believe they had Ork, IG, BA, and Eldar players.  Several good and several bad match-ups for our team in there.  My list actually had the worst possibilities and our table set didn't have any ruins for me to bolster, so I put myself in the champion position and ended up with my worst possible pairing: orks.  My opponent was Nate.
His list (spprox):
Ghaz
Mek + KFF
5 Mega Nobz + diversified kombi's, battlewagon w/ rolla
12 Burna Boyz
5 Lootas
6 Lootas
20 Choppa Boyz + klaw/pole
30 Shoota Boyz + klaw/pole, 3 big shootas
30 Shoota Boyz + klaw/pole, 3 big shootas
10 Grots
3 Kannons
Battlewagon + rolla
Battlewagon + rolla
One nightmare of a list for GK with ~100 bodies to the 40 models in my army, plus Ghaz's badness and 3 wagons.  Luckily, my good buddy Gerry plays a very similar list and I have more experience against Ghaz's wagons than any other army or build.
Oh, did I mention the mission was seize ground (3 set objectives - 8bps), cap'n'control (4bps), and vp's (8bps).  Not only am I outnumbered almost 3-1 and without purifiers, but I'm looking at 5 objectives with 20 scoring bodies.  I'm comfortable playing against orks, but I don't know if my list has the tools to fight this match.
I win the roll-off and elect to go first and try to shut down some wagons.  Here's my army deployed in spearhead.  Terminators are in the stormraven with my libby and the razorback squad with tech marine are reserved. 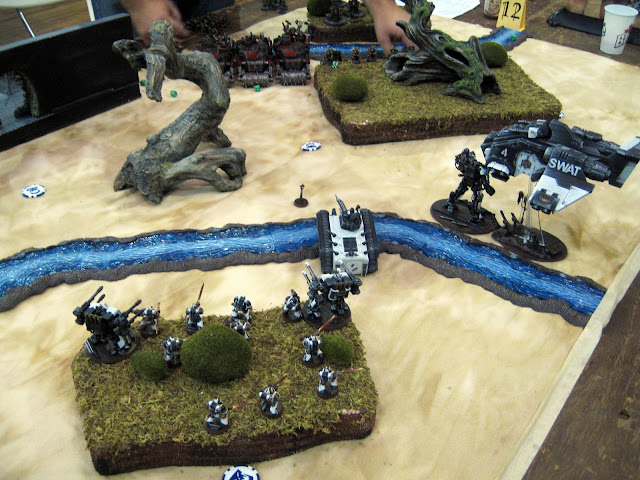 The strike squad in the bottom is combat squadded.  Nate sets up his av14 wall with two foot mobs mostly out of sight. 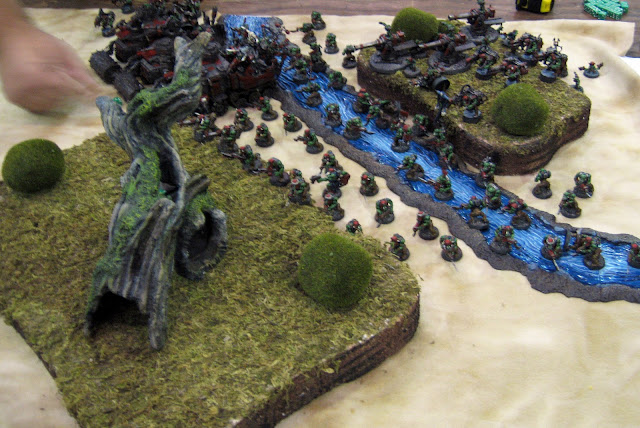 I know my army has zero chance to stop all those orks in a head-on rush so my plan is to use some of my speedy and non-scoring units to siphon off some of his army and roadblock him.  Here's something new I learned this game: even though a dreadknight can place the heavy incinerator out 12" and hit units 19" away, the primary target still needs to be within 12" or else the shot does not have range and you don't place the template.
So turn 1 begins with me burning my shunt move or else I wouldn't get to flame anything because I started the dreadknight so far back.  This also requires me to be in assault range of the orks, but they're in a river so I try to shunt ~11" from his boyz and hope the terrain trips him up.  I kill around 5 orks.  The stormraven wiffs on side shots on Ghaz's wagon.  I decide to break try and break the lootas with my riflemen and not waste shots on av14, but Nate's cover saves were hot and morale tests were cool.  I kill 2 lootas and he passes his test.  My alpha strike turn earned me about 7 dead orks. 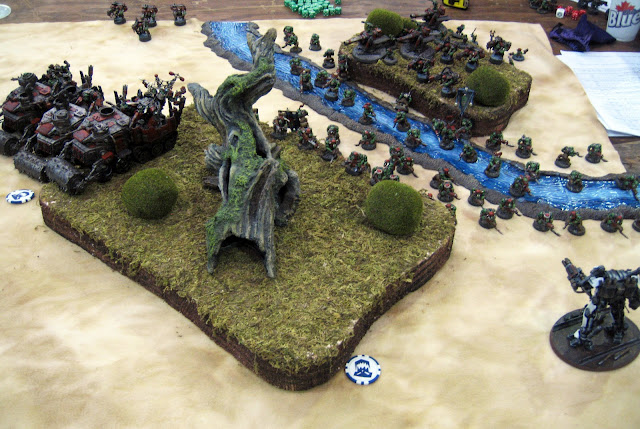 Nate rolls up all 3 wagons and the shoota boyz head for my dreadknight.  He's actually able to put a couple wounds on it with an ungodly amount of ork shooting.  My stomraven gets stunned.  Turn 2 arrives without my razorback squad, but I do get fortitude off.  I've got to throw everything at those battlewagons to protect my scoring knights.

The chimera zooms up and blocks two wagons.  The henchmen get out and prepare to melta.  The stormraven moves up using the branch to shield it from the lootas on the right and the terminators jump out to contribute more psycannon shots. 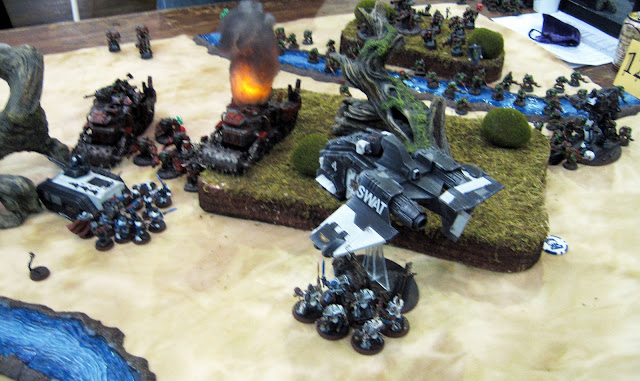 My dice were hot and Nate's were not.  I wreck Ghaz's wagon and he jumps out with burnas.  I explode the mega nobz' wagon and they pin!  My dreadknight flames several more orks and then assaults, surviving with 1 wound after Nate's nob also wiffed.  That was a pretty lucky turn for me.  I was also able to pop another loota, but he passed morale again.
Ghaz breaks off and comes after my terminators.  The burnas line up to fry my henchmen.  Instead of rolling my chimera, Nate sends his last wagon out on a flank. 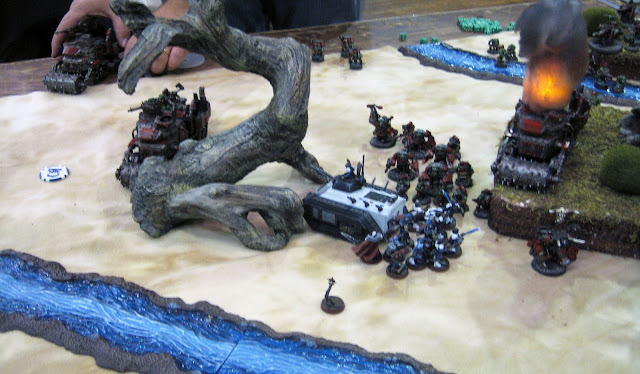 Nate declares his waaaagh!  He burns down all of the henchmen except the inquisitor and one crusader.  I pass morale.  My stormraven get stunned again along with my chimera.  I get sactuary off and the burnas fail to assault the henchmen.  Ghaz however smashes into my terminators and turns the libby and a couple of his buddies into jelly.  I think I was able to get a wound or two onto Ghaz.  A full squad of 30 boyz jump into melee with the dreadknight and it goes down.
My razorback squad arrives at the top of 3 and they jump out to get off maximum shots.  At this point I'm still pretty pessimistic about the outcome of this game, so I'm just trying to keep stuff alive to contest.  I fail fortitude on the stormraven.  My inquisitor and crusader jump back in the chimera.  With another bit of luck, I'm able to wreck the last wagon with a glancing shot from a dread.  In assault, my warding stave and terminator justicar are able to hold off Ghaz and give him another wound. 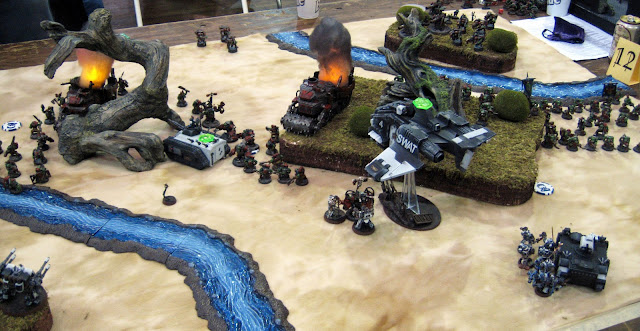 Nate pushes over all 3 objectives.  In a freak ork sniping incident, he picks off my tech marine and all his wonderful grenades.  My stormraven survives more loota fire.  The manz assault the stationary chimera and explode it.  The burnas assault in to save Ghaz and in another freak instance of "beat those odds", my terminators kill Ghaz and win combat, breaking the burnas (who are still above half strength).
I've got to keep him running, so I bring the stormraven up and jump the last terminator in.  I think he's overextended himself on the left, so I send up one squad and a dread to try and tarpit him and pull him away from that objective.  My surviving razorback squad jumps back in their ride and moves up to contest the right. 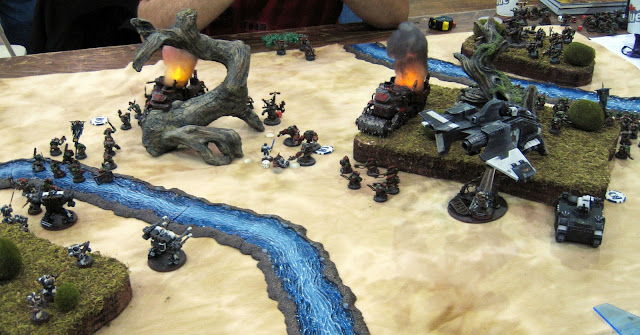 I'm able to put the burnas under 50% with shooting so they will continue to run.  I pop one of the manz with a rifleman, but Nate passes his morale test.  The stormraven unloads 6 missile templates (4 mindstrike, 2 frag) into a cluster of boyz and kills several, but not enough to change the tide on the right side.  I assault the boyz from the wagon on the left. 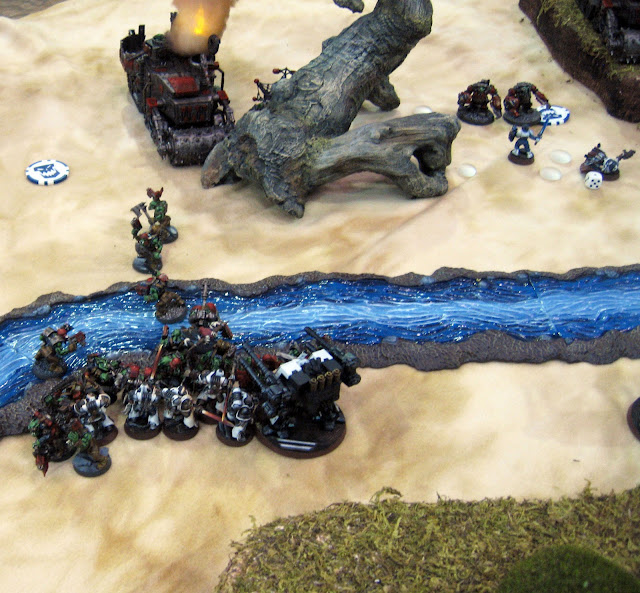 He kills 4 marines, the 5th runs away, but the dread holds steady.  We're running out of time and can only play one more quick turn.  Nate wiffs on my razorback and kills the inquisitor and crusader in assault.  On the left, my dread takes a beating from the nob but remains intact.

On my final turn, I zoom up the razorback to contest the right and the stormraven holds the middle with one terminator inside.  I kill one more meganob and Nate finally fails a morale test and the last one runs.  He fires at the stormraven again and is finally able to destroy it.  However, he is unable to kill my terminator.  On the right, the boyz cannot destroy the razorback and on the left, they are unable to finish the dread (who is immobilized with no weapons).

The game ends with me holding 1-0 of the seize ground objectives, we both hold our cap'n'control objectives, and Nate is up by a bunch of victory points.  The final score was 13-7 in my favor.  Our teams were very evenly matched and we ended up 41-39 for the round.  We didn't place, but I was flying high on my minor victory over an army I didn't think I could beat.  Nate's a top-notch player and went on to take 2nd Overall in the main GT.
at 10:46 PM