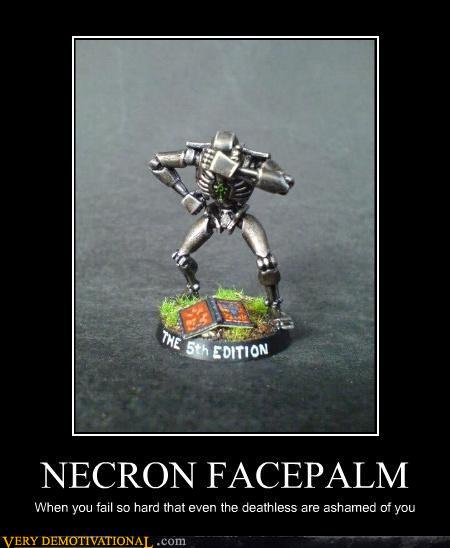 Wow, what a hot topic right now huh?  I think every blogroll around the world right now is dominated by Necron thoughts, reactions, lists, cheering, and crying.  I've already seen a battle report on dakka where "overpowered codex" was used in describing the new Necrons.  I am not going to build a Necron army, but I am happy about the release for several reasons.

#1 New Shiny Toys.  Literally with the models and figuratively with the new game mechanics they will bring.  Some will love them and some will hate them, but overall I think the changes will be positive for the hobby community.  I also can't wait to set up across from a fully painted Necron army with some of the new models.  Some won't like the fluff, but the storyline needs to progress somewhere.  The Imperium is treading water, the first wave of Tyranid Hive Fleets has been beaten back, and Ork WAAAAGH's are so predictable in some sectors that the Imperium has them timed and uses them as training exercises.  The galaxy and the hobbyists needed a new fluffbomb to rally around and get excited about.  Some won't like the new models, but I think they bring a little needed flavor and all the grunts still look mindless and evil enough.

#2 A Decline in Mech and MSU?  So they're an elite shooting army that are also resilient to shooting.  They keep standing back up until you wipe out the full unit, which is a lot harder to do with shooting than sweeping them in assault.  Their weapons can hit more than one unit.  They have anti-tank units in every force org slot thanks to crypteks.  Scarabs can wreck a tank without ever rolling on the damage chart.  Then when it's your turn, they turn out the lights and you wish you bought those extra searchlights.  That sounds pretty grim for MSU mech to me.  I bet within 6 months someone rolls a GT with a Necron list tailored to crush razorspam and becomes the next "Draigowing" fad list.  The meta will change and adapt and we'll start seeing foot lists gain popularity for a while.

#3 Tyranids Rejoice!  Still bruised from the Dark Eldar release and their insane poison and lance torrents, still traumatized from facing an army of force weapons and storm bolters, Tyranid players clenched their collective assholes and flipped through the newest book.  Now that you've read through it, are we really any worse off compared to the last two books?  They shoot you about as hard as guard but with better accuracy and less bodies.  They fight at I2 and will stop standing back up if you wipe them out in combat.  Did you learn how to get your gribblies into an IG parking lot?  The same goes with Necrons.  They have a couple things that can sting you in close combat, but nothing like having to deal with paladins or even hammernators.  The C'Tan shards can poke you in the eye, but we're all familiar with the fragility of MC's by now.  There's the one guy that can "cleansing flame" all genestealers in assault, but you still get your armor and FnP.  Oh wait, they have no psychic defense either?  God, it may even be worth using hive tyrants again.

Maybe it's just me, or maybe the feeling that each new codex slaughters Nids in evil new ways is legit, but I don't think my bugs will break a sweat pounding the new shiny robots into the ground.  They will do evil things to all the treadheads and I will thank them for what they do, but for once I'm happy there's a new army that doesn't fill me with despair and dread when I look at my Tyranid collection.