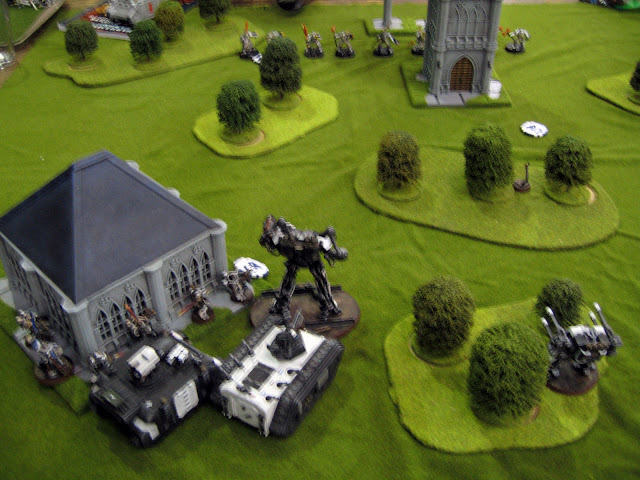 On my right, the techmarine joins the terminators in the storm raven with a combat squad below on the objective. 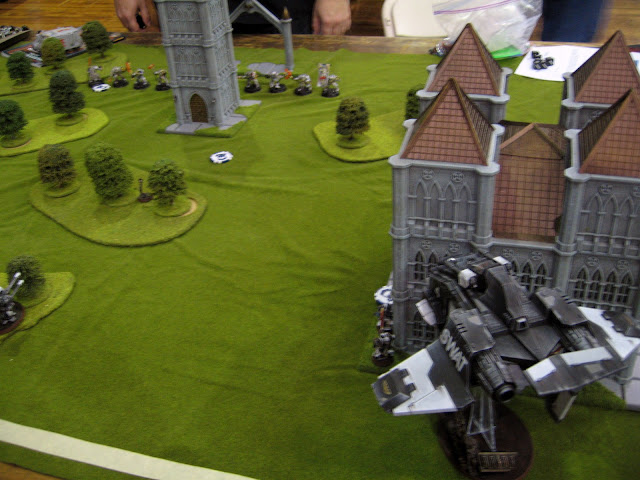 Matt makes his dreadknight scoring, deploys it with the rifleman in his backfield.  His grandmaster joins his 10 terminators and form a line.  He reserves everything else. 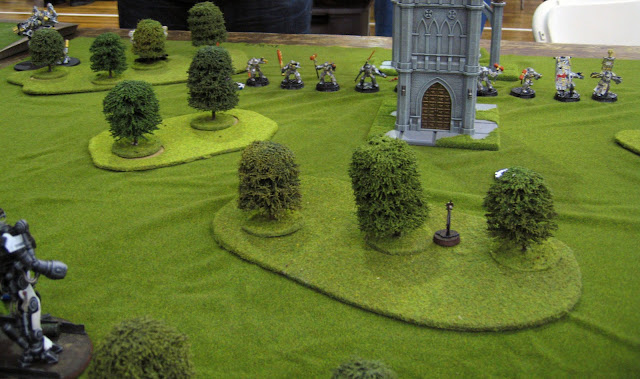 My movement phase goes quick as I only jump up the dreadknight to provide a front line blocker and move the storm raven to drop some missiles on Matt's GM. 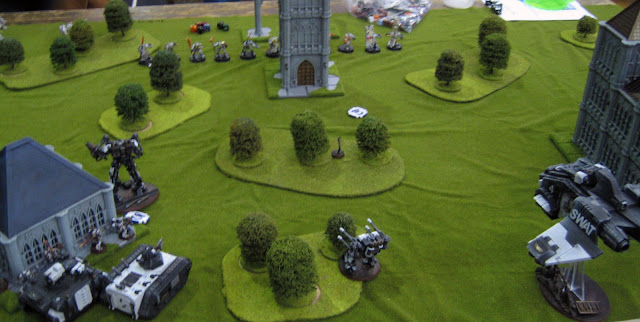 Nearly my entire army fires on the terminators and I'm able to kill 8 of them and put two wounds on the GM.  Matt shuffles his survivors out of sight and wiffs with his shooting. 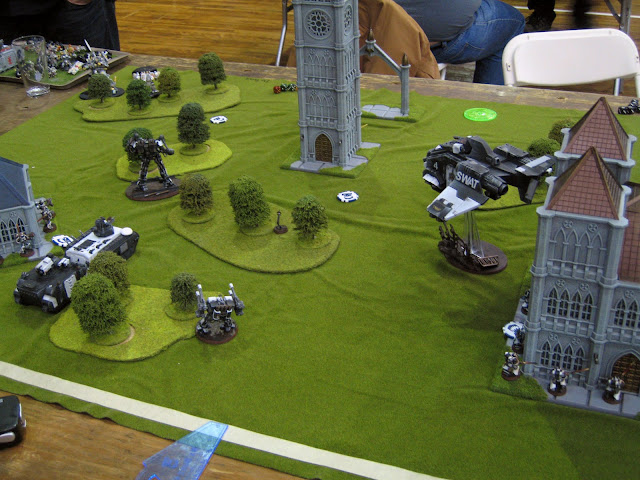 I'm forced to move almost everything to get better firing lanes and my few shots don't do much.  Matt fails all of his reserve rolls and runs away more.  He is able to wreck my storm raven despite my flat-out save. 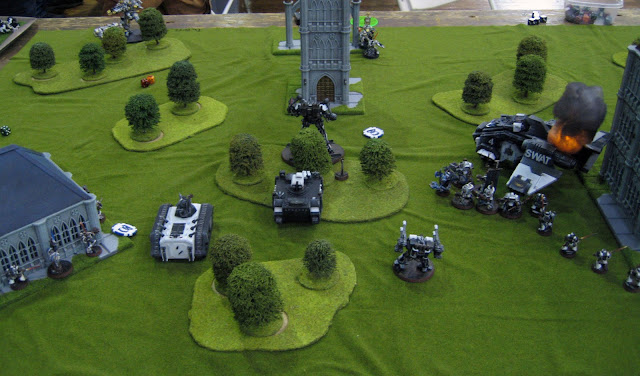 It's time to remove 2 objectives.  I take out the one closest to his terminators and he takes out the one closes to mine (both right side objectives).  Everything moves up to try and control the center.  My shooting does absolutely nothing.
Matt gets communion off and all of his reserves.  Everything comes in on the left.  His dreadknight shunts up the left flank out of sight behind the building.  His shooting stuns the chimera and blows off the turret. 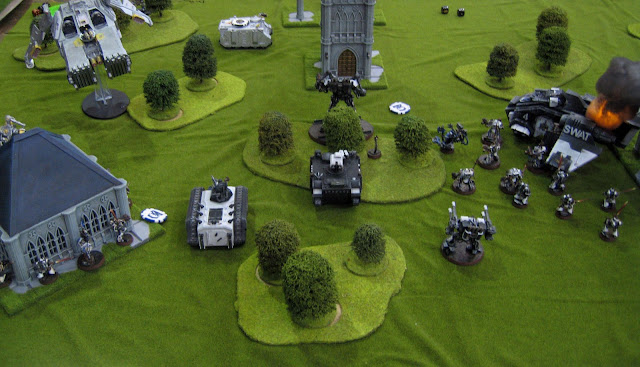 I send everything towards the storm raven.  If I let those purifiers in my ranks, my whole army will fold. 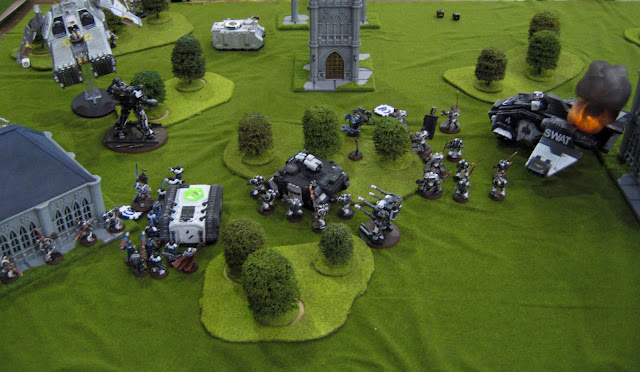 It takes most of my firepower, but I'm able to take down his storm raven.  My dreadknight burns the purifiers and assaults them, whiping them out with fearless wounds.
Matt drops the hammer.  His dreadknight jumps over the building and eyeballs the henchmen.  He moves his rhino over to the right and jumps the knights out. 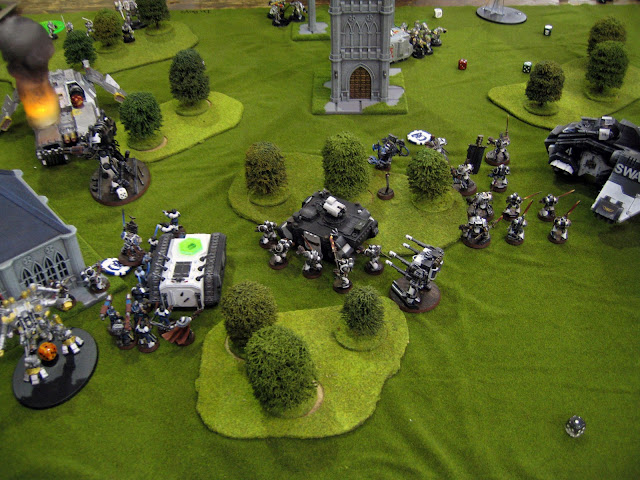 Will you believe I lose 3 out of 5 terminators to his strike squad's bolter and psycannon shots (no rends)?  His DK burns and assaults my henchmen and I lose them all with the inquisitor and librarian who had joined the unit.
I'm actually starting to get in trouble here.  We each have one objective and Matt has a rhino in range to take mine away since he went second.  He has a dreadknight in my backfield and is already up on kill points.  My terminators, techmarine, and combat squad keep pushing forward on the right.  Everything in the middle and on the left needs to put 3 more wounds on his DK or he will crush my only scoring unit on that side. 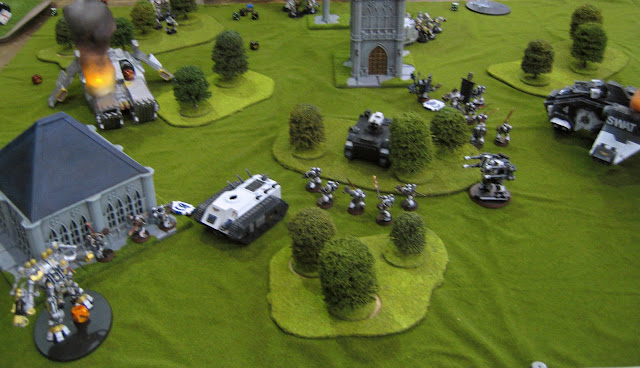 I'm able to put two wounds on the DK, but it survives the round.  My knights on the right kill a couple of his.  At this point, Matt points out that I fired my closest psycannon on heavy mode and cannot assault the DK.  That was a pretty huge mistake on my part.  At this point, we're starting to run short on time and I really need 7 turns to even stand a chance.
Matt does everything he needs to, pulling my left scoring unit off their objective, loading his rhino and zooming up to contest the center.  He kills my last terminator.  We roll and the game goes on to turn 6.

I send up the techmarinepsycannon are unable to dent the rhino.  My amazing techmarine blows it up with his plasma pistol, but dies in the explosion!  The unit inside also pins.  That was an epic set of rolls.
Matt finishes off the leftmost combat squad and jumps up to bang on the chimera.  We roll for the end and will play a 7th turn.  At this point, I have 0 objectives and have no way of catching him on kill points.
My last turn goes relatively well as I'm able to take the last wound off the dreadknight.  My knights up top shoot down some of Matt's and wipe them out in assault, consolidating onto the objective.  Matt makes a last turn blitz with his terminators, but doesn't get close enough to contest as I blocked the way with razorback and dreadnought.
The game ends 20-15 in my favor with me holding objectives and Matt crushing me on kill points.
Not a terrible way to start the GT, it could have been much worse for me.  Matt would have had a massacre victory if the game ended on turns 5 or 6.  I got too cocky with a strong start and Matt capitalized at every turn.
at 10:59 PM