I finished base coating the army today, but with 5 days left until the tournament, I will not be able to fully finish it.  The tournament is just a monthly 3 game event so it's no big deal, but it still makes me a little sad that I missed the deadline.  It's still not bad progress for only 3 months from start until now, and with another tournament coming in May with heavy paint scores and DaBoyz GT 2012 in October, I still have plenty reason to keep working towards finishing the army.

The army features a beast pack made with fantasy models and hellions saving me a ton of money over the metal and finecast models.  The khymera are mostly red and orange, the razorwings are shades of blue, and the clawed fiend is purple.  As a whole unit, they reflect every color seen in the rest of the army. 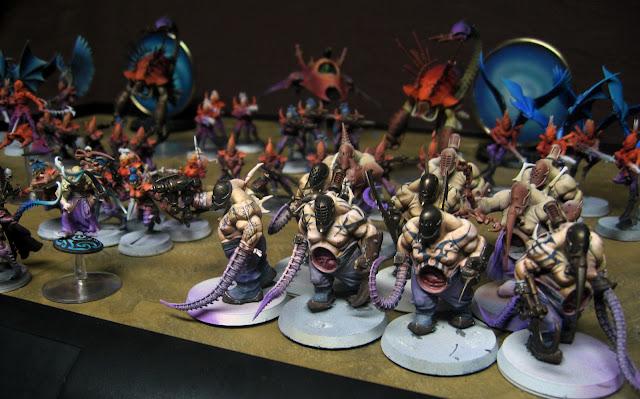 There's also a unit of 10 grotesques converted with talos bits, sculpted guts, and freehand tattoos.  Finishing touches will also include filling their "gut windows" with water effects to add another medium.  There are also two converted haemonculi which used bits from fantasy flagellents, ghouls, talos, and warrior kits. 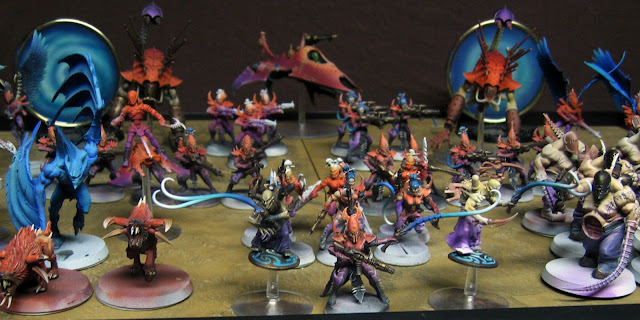 In the back you can also see the custom webway portals I made with metal rings and water effects.  Once the army is completed, it will be my best chance to go after painting/theme awards with a ton of conversions, freehand, air brushing, dry brushing, washes, and water effects.  It may not be the most competitive army I've ever built, but it is a lot of fun to play and look at hehe.

Saturday is the tournament at Millennium Games.  It's my first tournament in 3 months and I'm super excited to get out of the house and throw some dice, even if I lose all 3 games.  I'd love to see all my local readers there and I'll post up my battle reports in the following week.
at 8:51 AM