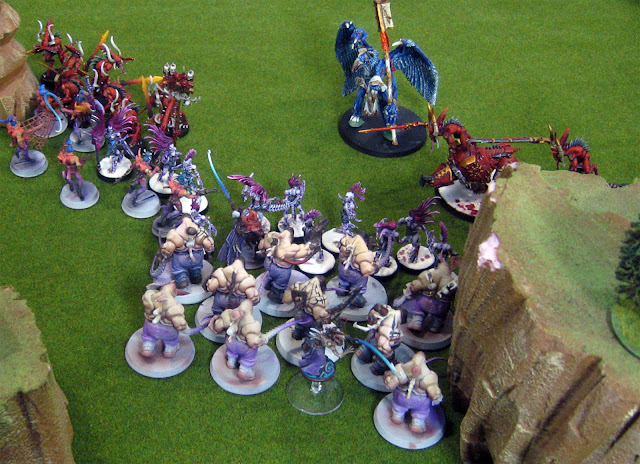 My third opponent was Chris and his daemons.  His list was approximately:

Before we get into the mission, you'll need more info on the format.  This tournament is actually a sideboard event with a 1350pt army and two 500pt sideboards to choose from each game.  Since my army is new and I only own the models to make one 1850pt list, I effectively only brought one sideboard.  My archon and grotesques weigh in at 500pts, so they were my sideboard.  This mission was spearhead deployment, table quarters by victory points for primary, kill the commander for secondary.

One special rule for this mission was that each player would deploy their 1350pt main force and their 500pt sideboard must be reserved and must arrive turn two.  I asked the TO how this would apply to daemons and he informed us that daemon players will receive their 1350pt list turn one and their 500pt list turn two.  Yes, that means the entire 1850pt daemon army will be on the table turn two with no waves or reserve rolls at all...  I asked him the same question multiple times phrasing it different ways just to make sure we were about to play this properly.  Chris gets his entire army by turn 2 and I'm prohibited from deploying my anchor unit.

Chris wins the roll and gives me first turn. I pick the quarter with the most impassible terrain just outside to give him more chances to mishap.  I don't think I want to come in piecemeal, so I deploy my beasts and both talos in case he drops in assault range.  I put one haemi with beasts and the other in the trueborn's venom out in front. 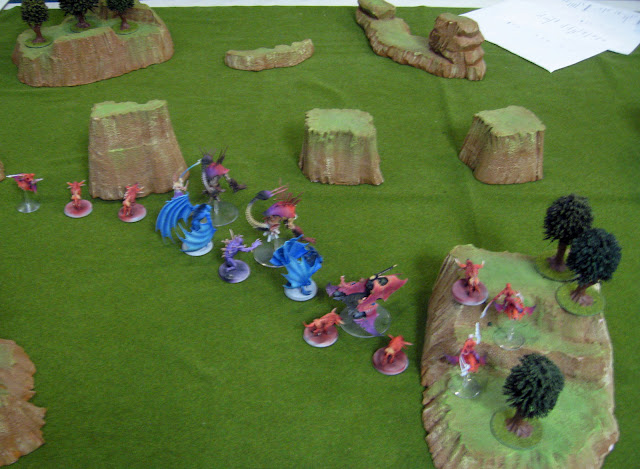 Turn 1 begins and I move everything up.  Trueborn disembark and I drop both portals so I can strike most of the board between them and my table edge. 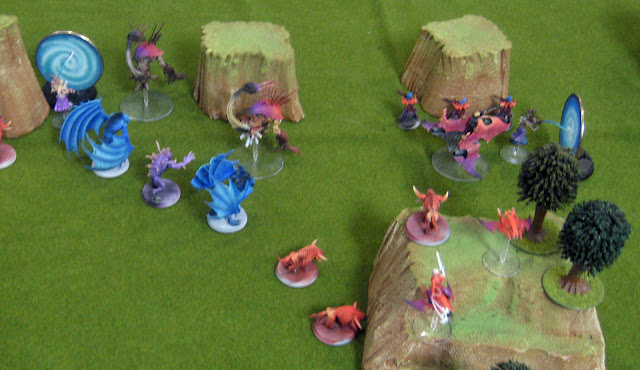 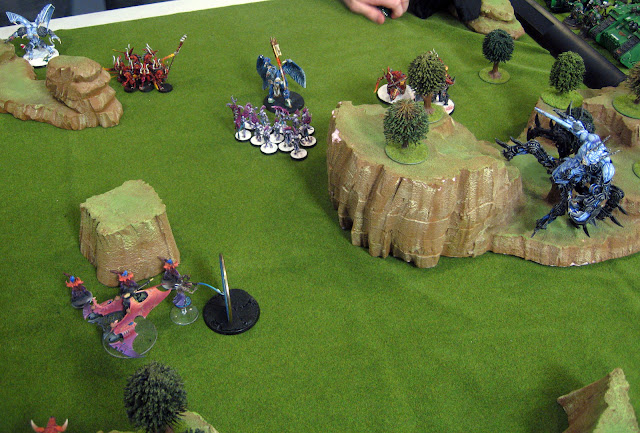 No mishaps, but the soul grinder does immobilize itself on arrival.  At least my grotes are safe from the str10 now.  Horrors do scatter right in front of a talos which will be bad for them if they can't shoot it down. 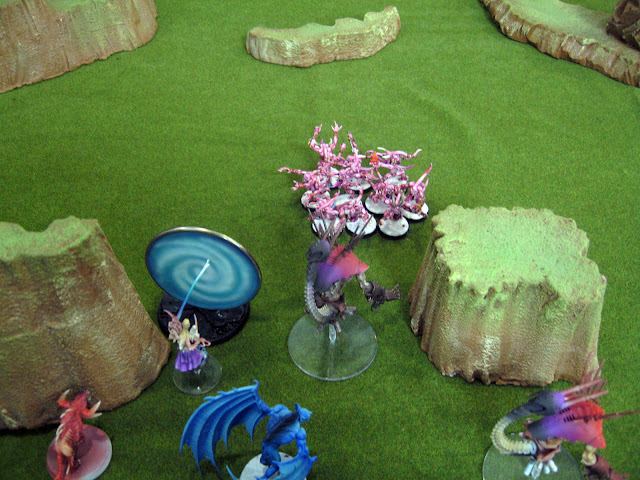 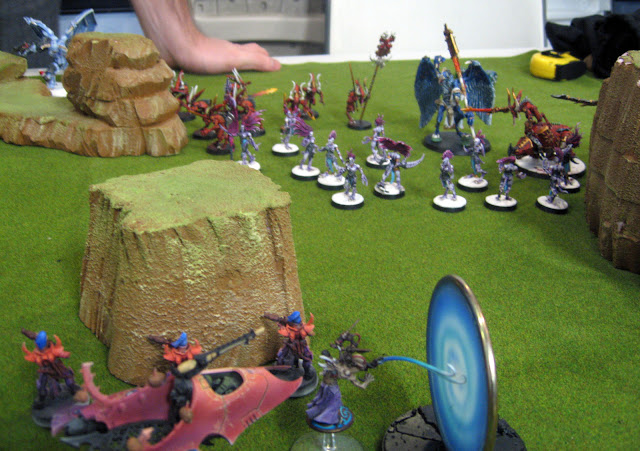 His shooting explodes the venom, kills one trueborn, and puts only two wounds on the talos.

Mu turn 2 begins and I get the grotes, archon, wyches, and heat lance scourges.  I debate for at least 5 minutes as to where I want to make my stand, and I decide to rush right up the middle.  I hope wyches and grotes can multi-assault daemonettes and bloodletters and cause enough casualties to wipe them both with no retreat wounds.  Scourges fly in off the board edge into melta range of the soul grinder. 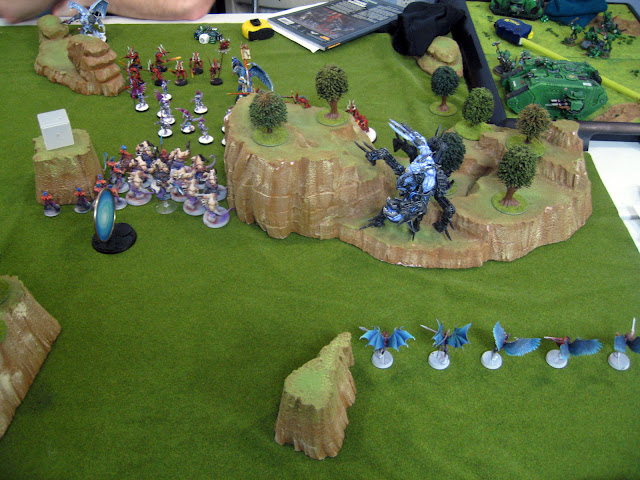 Scourges explode the soul grinder.  I assault in, putting wyches with the shardnet on the bloodletters to reduce their attacks and hopefully make some invuln saves of my own.  Archon and grotes go fully into daemonettes. 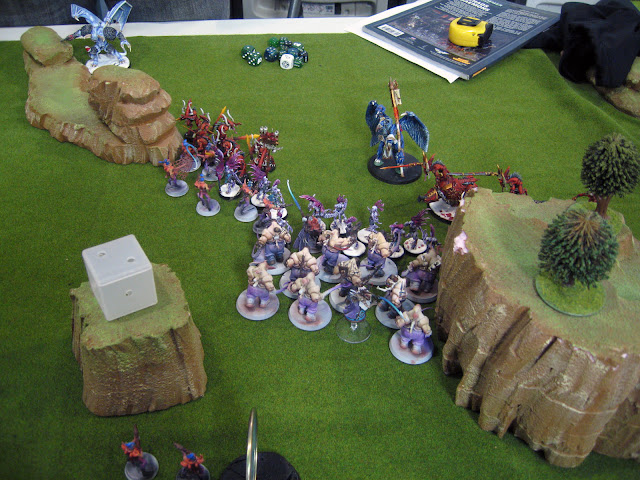 Chris rolls a respectable amount of rends and my archon's shadowfield explodes on its first hit.  My grotes take a bunch of wounds.  Wyches totally wiff (and Chris was hot with his rerollable invulns) and I lose five of the six.  Grotes flail around and kill all daemonettes except the icon.  I win combat, but not by much and Chris makes all his saves.  This is really bad for me because my grotes will lose an attrition battle against all those power weapons and I barely scratched the 'letters.  On the left flank, I send my talos into the str3 horrors knowing it will be immune.  I choose not to send in the beasts, which will be a big mistake as the horrors will tarpit my talos way longer than I expected.  The talos only kills 2 horrors. 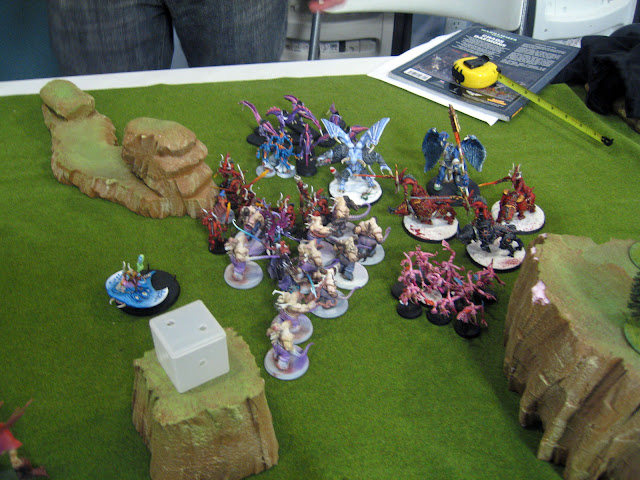 His horrors kill the trueborn, the herald and kairos shoot down the lead talos.  The bloodcrushers charge into the middle and I start losing momentum against all those ws5 power weapons and rerollable saves.  My archon takes another wound.  The talos fighting horrors kills three or four more. 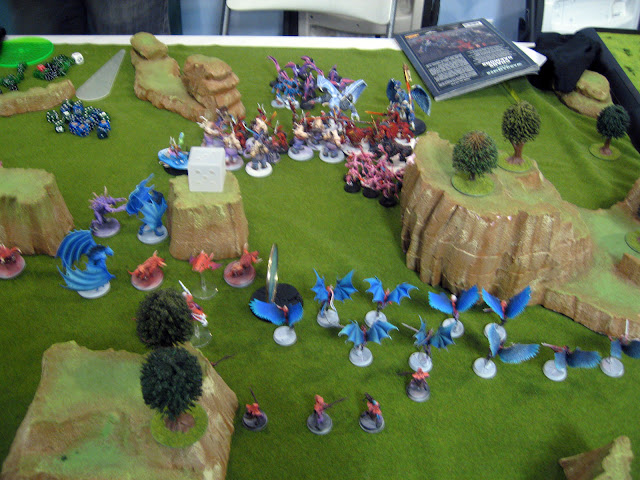 Trueborn come in the left portal.  Warriors come on the board edge to claim a quarter.  Haemi breaks off from the beasts to let them  loose at full speed. 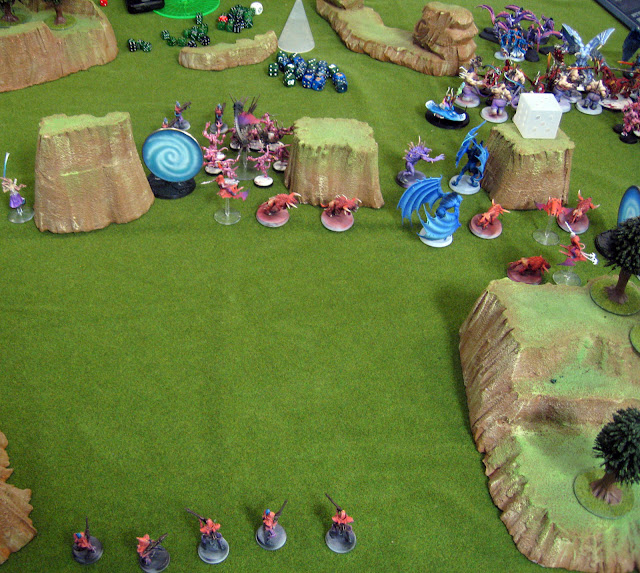 My firing squads put a few wounds on fateweaver, but he makes all his saves.  Beasts multi-assault the herald and horrors. 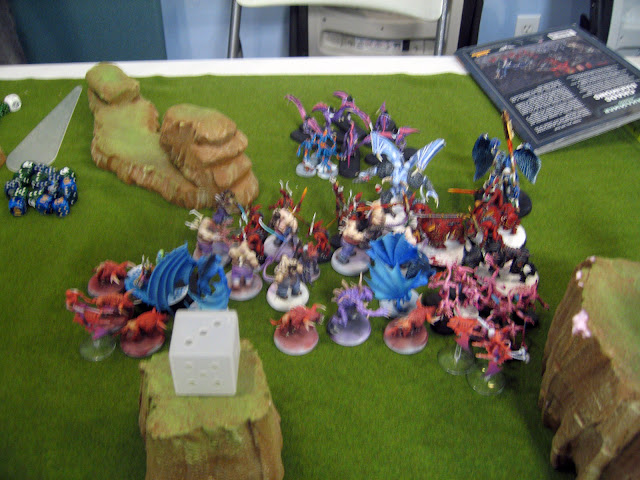 Grotesques finish the last daemonette and drop a few bloodletters, gaining me my third pain token for fearless, just in time to start losing combat big time against the crushers.  Beasts kill a bunch of horrors, but enough survive to lock combat.  The talos still can't finish his horrors.

Chris moves out the flamers and seekers. 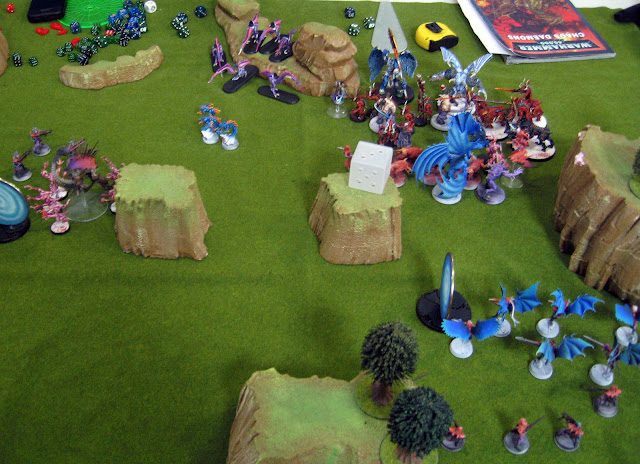 His shooting kills my trueborn.  In assault, my grotesn get knocked down to two and my archon is on his last leg.  My talos still can't finish the horrors.  Beasts finish their horrors.

Here I have a final dilemma.  The beasts are free and can assault crushers to try and save my archon, or go for kairos.  I figure since the secondary objective is to kill the commander, I'll go for kairos since I'm hitting t5 with a 3+ rerollable either way. 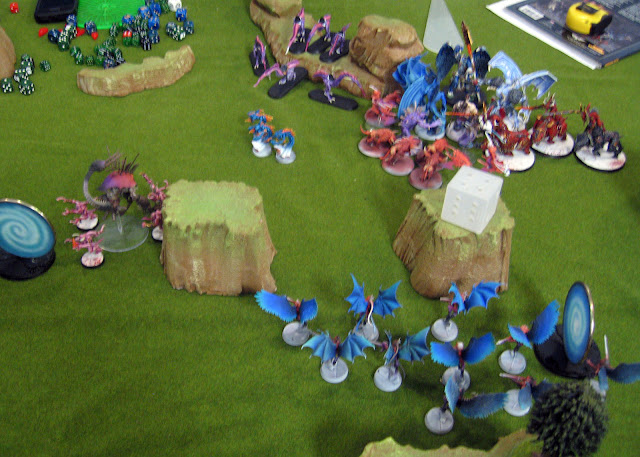 My shooting units are unable to kill anything.  I assault in and out of 30ish attacks, only cause three wounds and kairos saves them all.  He causes one back and my khymera fails his save.  I lose combat by one, fail my morale test, and run with tails between legs.  In the other combat, my archon and last grotesques fall.

With both my assault units dead or broken and my last talos in the open with 1 wound, I concede to Chris.  We're also short on time due to the complex assaults starting on turn 2, but he can easily table me.  The final score is a 3-20 loss for me.

It was a fun and intense game for me.  Those assault phases with initiatives from seven down to four, multi-wound allocation pools, FnP, and rerollable saves were just draining.  I made a mistake not sending the beasts to help the talos.  The extra movement and free talos may have helped me hold the middle.  There's also the thing about daemons ignoring waves and reserves, but it is what it is.  Chris ended up taking first with 11 points more than the GK players who drew their game.  I still had enough battle and painting points to end up 5th out of 24.  In the end, I'm fine with that (elated actually) as a first tournament with this army.  If fate had favored me instead of Chris, I would have also outscored the GK players for first.  Not too shabby I guess.  I may even twist Chris's arm for a rematch with standard deployment and missions.


As always, thanks for reading!  More DE hobby and batreps will becoming as time allows.  The next RTT I can attend is in May, but I'm going to try and resume my attempt to get in one casual game per week.  If you're a local reader and want a game sometime, LMK!
at 8:02 AM