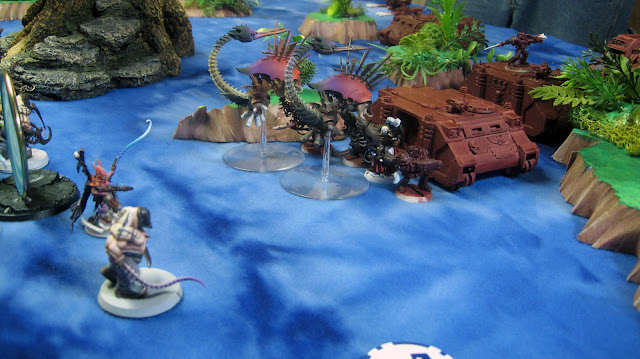 This week, Rob came out for a game.  We decided to play an ATC-style mission with 3 seize ground objectives, 2 capture & control objectives, and kill points all together.

So, just looking at the lists, he has more kp's than me but they are tougher to collect in that the army is fully mechanized so I need to pop armor before I can inflict real damage.  Those strike squads can potentially wipe out an entire unit each turn with 4-8 psycannon shots and 16 str5 bolter shots per turn.  He also has 5-6 scoring units to my 3 so advantage GK just based on lists.  We roll pitched battle deployment and Rob makes me go first.  This is a solid choice as he has several tanks to make late game moves with.  It also allows him to do something else I didn't expect.  We place 3 objectives in the center region, my c&c objective goes dead center of my dz, and Rob's goes into the deep right corner. 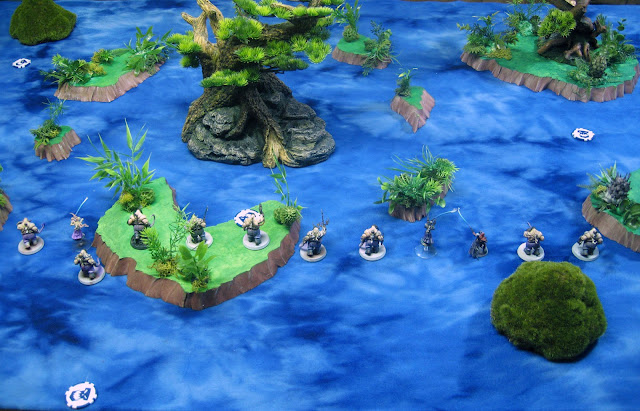 There's a lot to consider in that GK list that has me worried.  The callidus for one, has a flamer that instakills grotesques so I deploy my anchor unit with max coherency across the front of my zone.  Combat drugs yield a "1" for extra fleet dice. 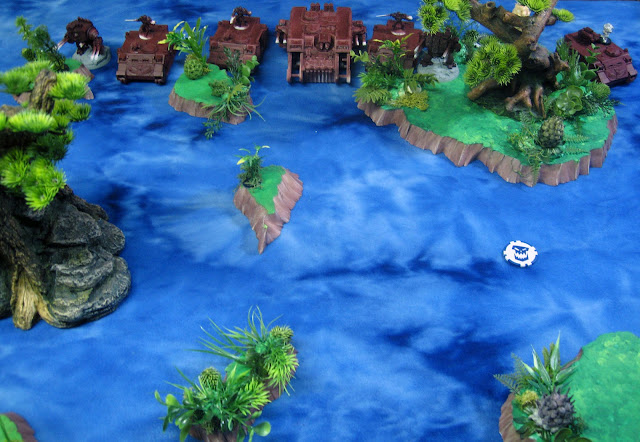 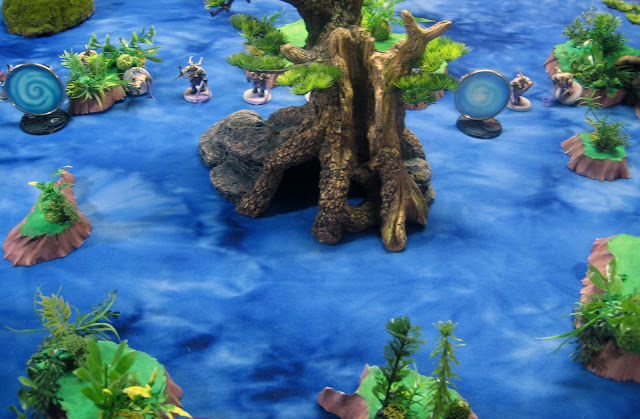 Rob makes his counter move, driving the purifiers up 12" and dumping them out with Coteaz very close to my portal.  Even here, I didn't realize how much impact that would have.  He shoots his whole army at grotesques, scoring 9 wounds after cover and FnP, causing me to remove 1 grotesque and leaving the abberation, liquifier, and another grotesque each with 1 wound left.

My turn 2 begins and I get my statistical half of my reserved units: one trueborn unit, the warrior unit on foot, blaster scourges, and both talos.  It was about this point that I realized every unit coming through the main portal would take 8 psycannon shots thanks to Coteaz's special rule.  There's basically no way any of my little foot squads can come in there and survive now.  I now have to commit both talos as kamikaze units to clear the way.  Each talos takes a wound from Coteaz's waiting unit.  Blaster scourges come in from my edge. 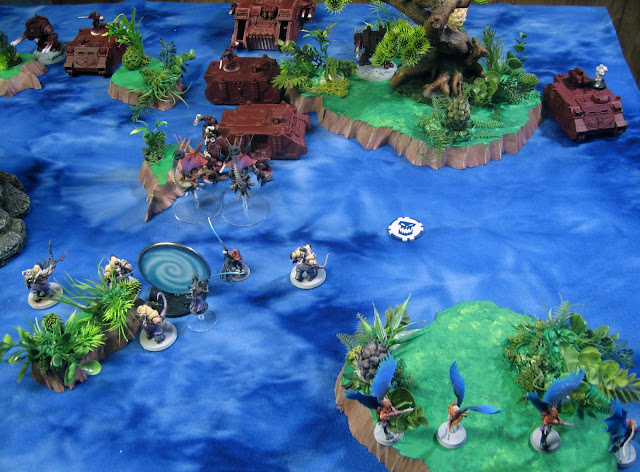 Trueborn come in the far portal and run out of sight and warriors come in on my edge. 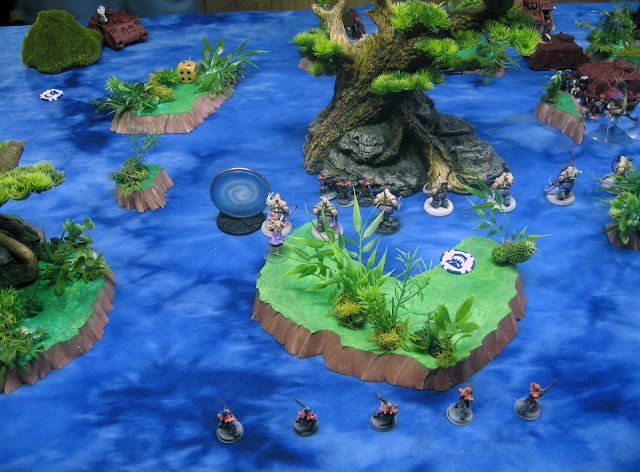 I move up the grot wall, but hold them back a bit in fear of a disembark assault from strike squads out of their rhinos.  Blaster scourges both miss.  Warriors and trueborn run.  Archon plinks a vehicle with his blaster but fails to pen.  The twin talos melt down a purifier and charge in.

The libby in the backfield gets sanctuary off, but they both make it in unharmed.  He gets off hammerhand, but loses the knight of the flame (with mc hammer) to perils.  He kills one talos and puts a wound on the other, but the talos twins instakill Coteaz and tear apart the remaining purifiers. 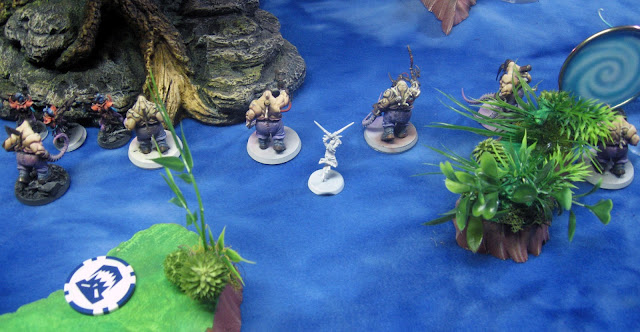 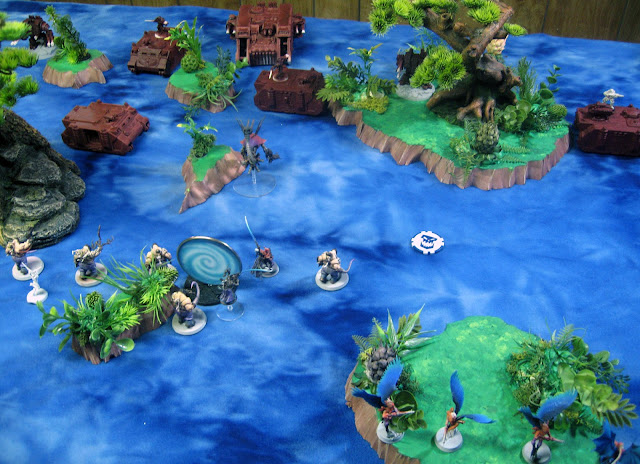 His shooting kills the last talos, 3 scourges (all carbines), another grotesque, and one warrior (went to ground).  The callidus lays out her flamer touching 3 trueborn and 3 grotesques.  The trueborn aren't wounded and grotesques take 3.  Since they would instakill grots, I allocate one to each haemi and one on the archon, who fails his shadowfield save!  Shoulda gave up a grotesque, ugh.

My turn 3 brings on everything except wyches and beasts.  I bring on heat lance scourges and trueborn from the main portal.  Venom comes up from my edge and behind cover.  Surviving blaster scourges shift over for more target opportunities. 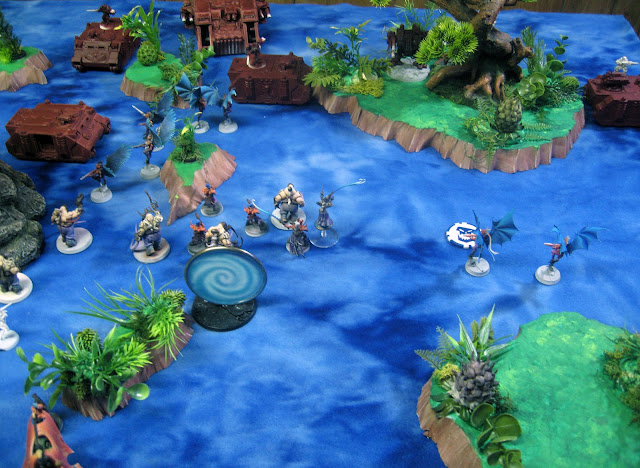 Warriors jump out of the venom to shoot the assassin and trueborn on the left jump out to shoot a rifleman. 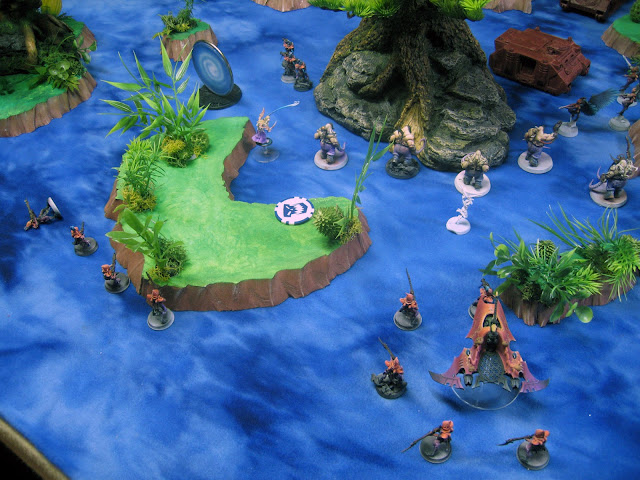 Warriors kill the assassin.  Heat lance scourges explode the land raider, kill 3 henchmen in the explosion, and pin the unit.  Archon explodes the strike rhino, killing one scourge.  Blaster scourges wreck the right razorback.  Trueborn on the left wiff against the rifleman. Rob begins his turn 3 by tank shocking heat lance scourges with the empty purifier rhino.  I fail my leadership test and fall back.  His strike squad pulls back from my grotesques. 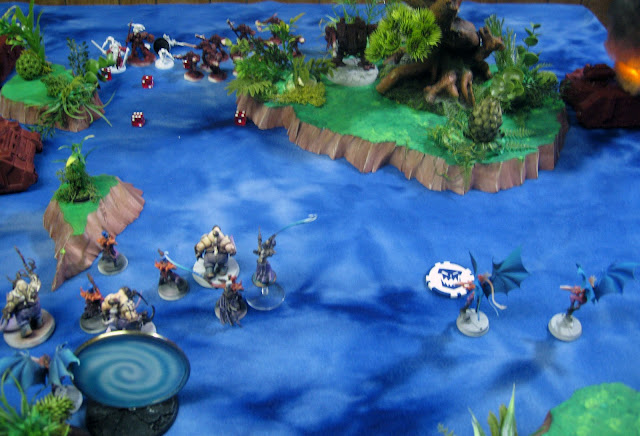 Units on the left shift a bit. 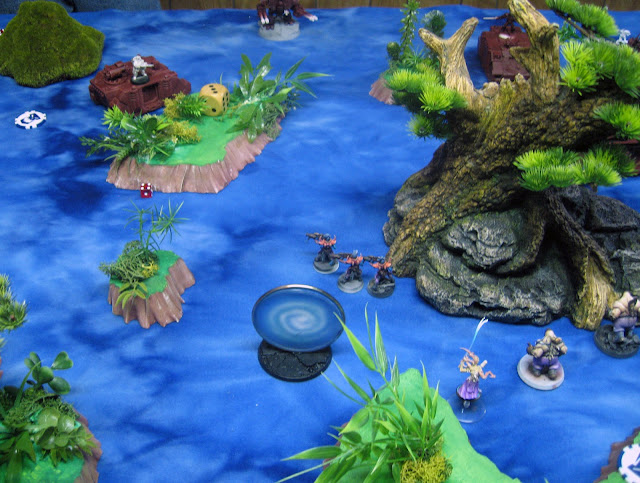 His volleys of psybolts take their toll,  wiping out both units of trueborn and blaster scourges.  I'm sure I lost another grotesque or two also.

My turn 4 brings on my last units, wyches and beasts.  Now I have a dilemma in that I'm running out of units so I need to cause some serious damage.  I decide to let the wyches roll up the left flank with their haywire grenades. 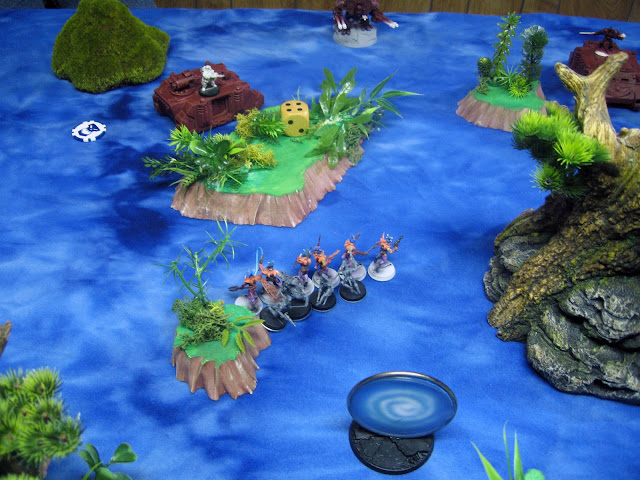 After much deliberating, I bring the beasts in through the right portal. I think I wanted to rend the dread, but I didn't think that through too well.  Tank shocked scourges fail to regroup and fall back again.  Warriors climb on the venom again which moves 6". 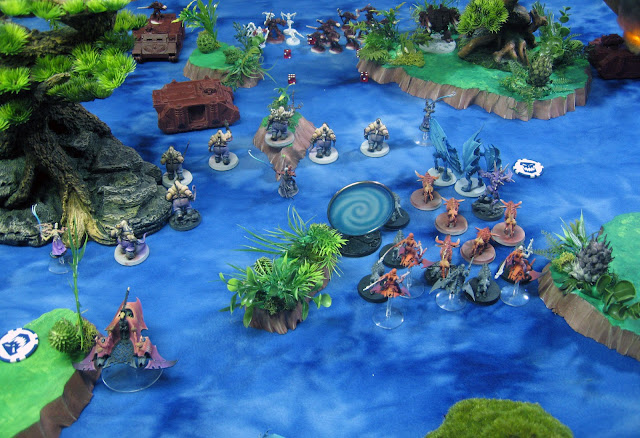 At this point, I opt not to assault the empty rhino with grotesques, so I wouldn't be so bunched up for a warp rift template or counter assault from strike squads (maybe I was a little over-intimidated by force weapons.  This was probably a mistake also, forgoing the free movement.  Wyches assault the razorback and wreck it. 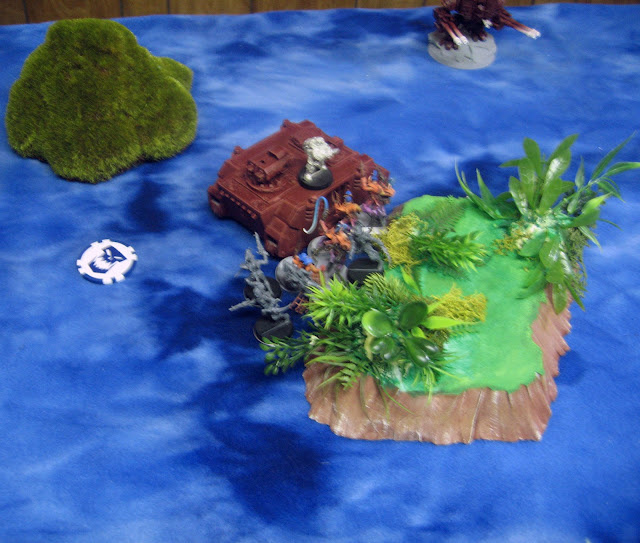 Beasts assault the rifleman.  I'm hoping for rends and to tie it up and keep my venom alive for late scoring. 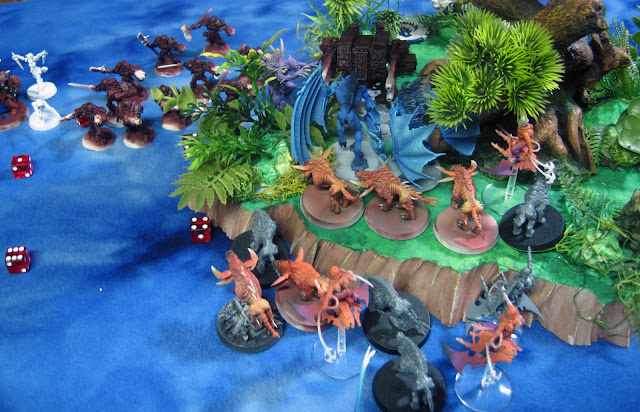 I fail to rend, lose a khymera, and we lock.
Rob starts his turn 4 with a move I didn't see coming.  He sends the mounted strike squad away from grotesques and forms a perfect firing squad on wyches. Lack of cover and armor costs me the entire unit. 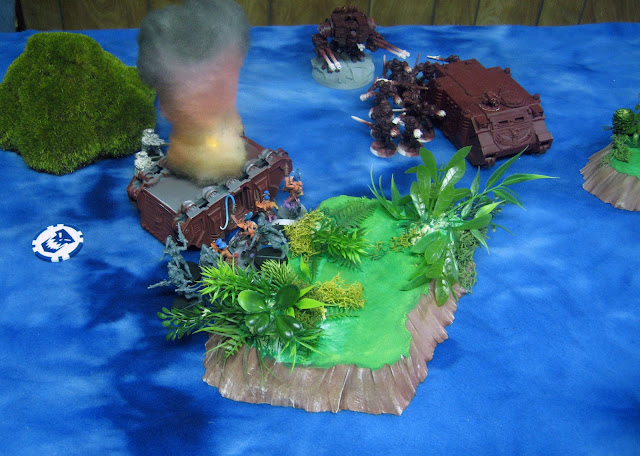 The purifier's empty rhino immobilizes itself trying to pick up the assassins, who jump into cover. 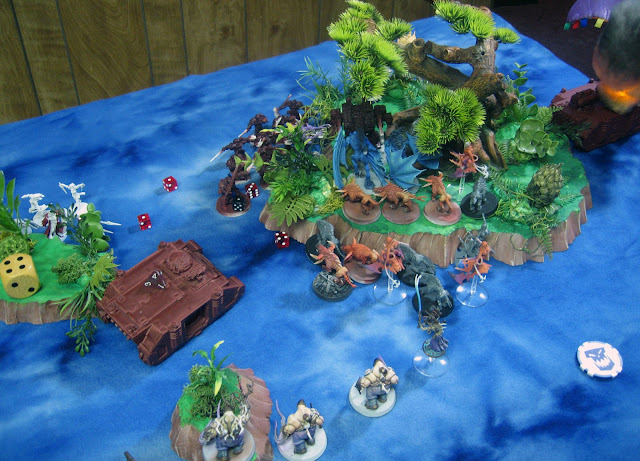 Libby joins the strike squad and moves to assault beasts. 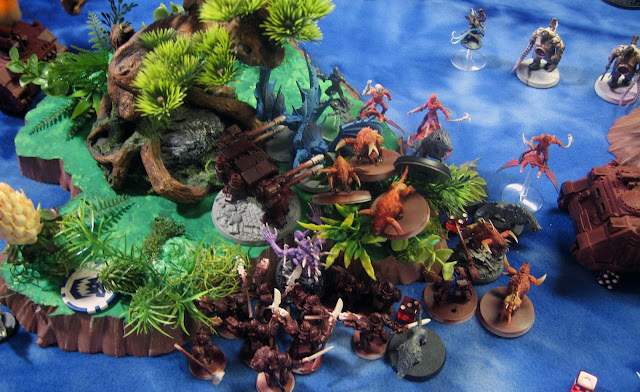 Mass combat ensues.  Khymera kill the libby at init6, and one knight.  I take a load of wounds on khymera, who make many saves, but I still lose by 3, break, and run away.  The dread consolidates within 6" to make me run again.


It's my turn 5 and I only have 3 units left.  Beasts fall back again, scourges fail to regroup again (3rd failed leadership test for them) and fly off the table.  Venom flat-outs onto an objective.  Grotesques move, but it's too little too late I fear.  The game could end here and they haven't assaulted anything yet. 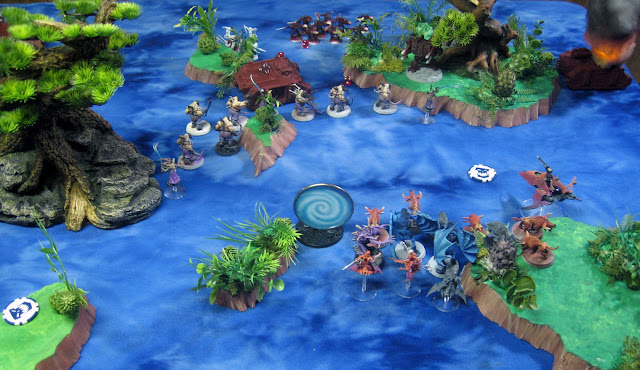 I assault the dread and rhino. 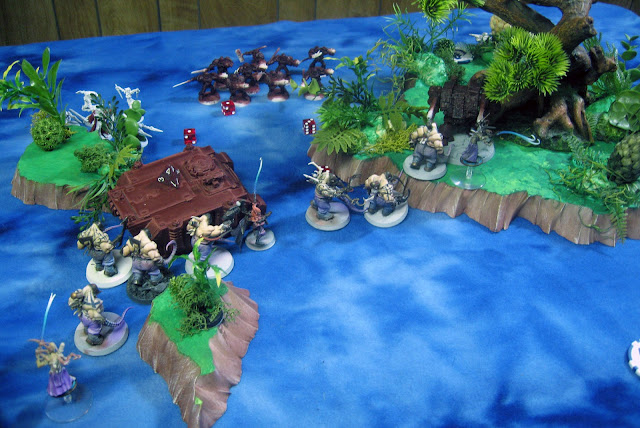 I guess I was hoping to glance the dread to death or something heroic, but again my math-hammer was way off.  I explode the rhino, but cause no damage to the dread.  Now my unit only has one chance to kill the dread and break free, but it would basically be triple 6's with a haywire grenade thanks to awesome walker combat rules. 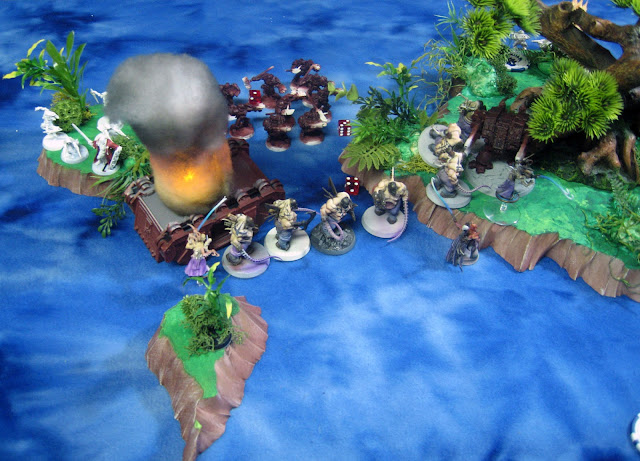 The strike knights on the left embark on their ride and move 12" towards my objectives and 3 surviving warriors.  The unengaged rifleman stuns the venom.  My archon wiffs with his grenade and gets instakilled by the the dread thanks to losing his shadowfield turns ago.  Rob rolls for the end and we play on.

My beasts fail to regroup.  My grotesques cannot hurt the dread. 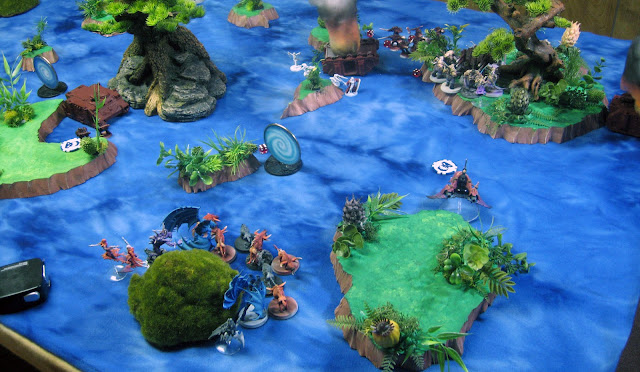 Rob makes some moves and takes some shots, but it's already over.  His strike squad made it to a second sg objective to the one I hold.  We measure contest range for my grotesques... 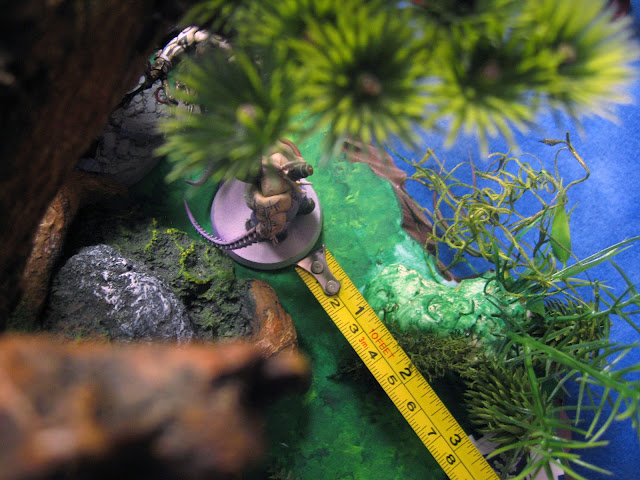 Well, that was an epic flop.  I dunno where my mind was this game, but I was fully blindsided by how Coteaz could block my portal.  Throwing away beasts and grotesques on the walker was just silly on my part, and losing 3 units (warriors also ran off) to leadership tests really, really hurt.  Rob played perfectly against my mistakes and earned a solid victory.  I probably should have brought everything in the left portal and rolled up the flank, leaving the grotesques to hold the middle and contest that objective.  I knew GK would be a tough match for this army and this game confirmed it.  I don't think it will always be an auto-loss, but I will need a lot of practice to figure it out.
at 12:28 AM