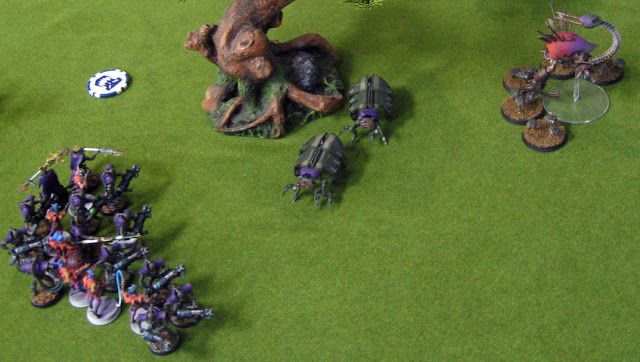 My second opponent was Dean and his necrons.  His list was approximately:

This mission was modified KP/simplified VP with each unit worth several KP's based on point cost.  Secondary was three objectives placed diagonally between opposite corners.  Deployment was a corner triangle.  This was my first 1850pt game against new necrons.  I have been following several bloggers and batreps on dakka though, so I don't feel totally lost.  Dean has two of the leadership flamers that can instakill grotesques, but besides that not much else that can deal with my deathstar so I'm banking on that.  I'll use them to deploy portals and hopefully bait the necrons close into the trap.

Dean wins the roll and decides to go first.  He deploys across his diagonal with royal court members joining each of the four viable units.  Deathmarks are in reserve with a HoDespair attached. 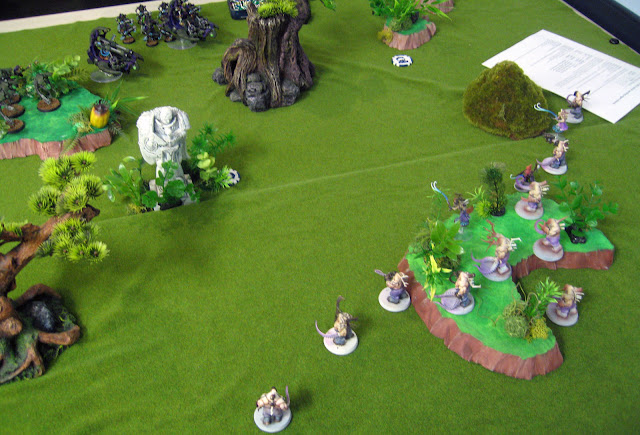 I spread my unit in a wide net to mitigate flamer damage, get my portals deep into the board, and ensure the unit is in cover.

The game begins with Dean spawning 2 more scarab bases and bringing his entire force forward.  A unit of immortals veils deep into my left flank, almost to my board edge with an overlord, and gaze cryptek. 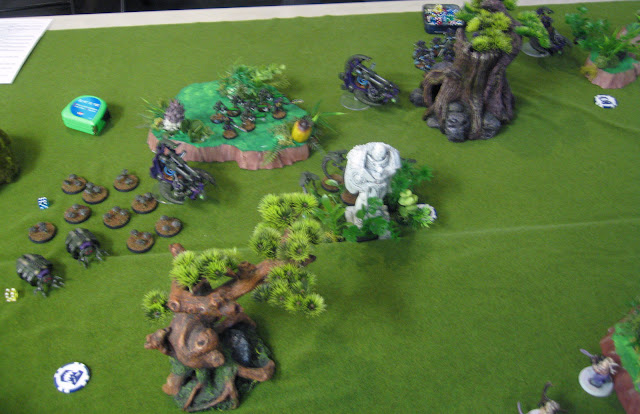 Dean unloads all that tesla and I fail way more than expected cover + FnP rolls, suffering about 5 wounds spread amongst my 3 grotesque allocation pools.

I move to place portals.  The center of the unit falls back a bit to try and out range the wraiths while the right arm of the unit advances to place a portal near the middle of the table. 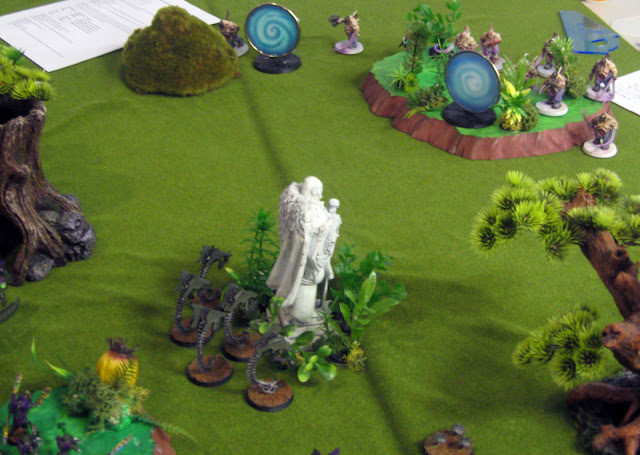 The archon tries to blast a wraith but it's saved.

Dean's deathmarks arrive at the top of turn 2.  He places them close to the grotesques to try and land the leadership flamer, but scatters away a few inches.  The command barge sweeps the grotesques but all attacks miss.  Spyders spawn scarabs and everything else advances. 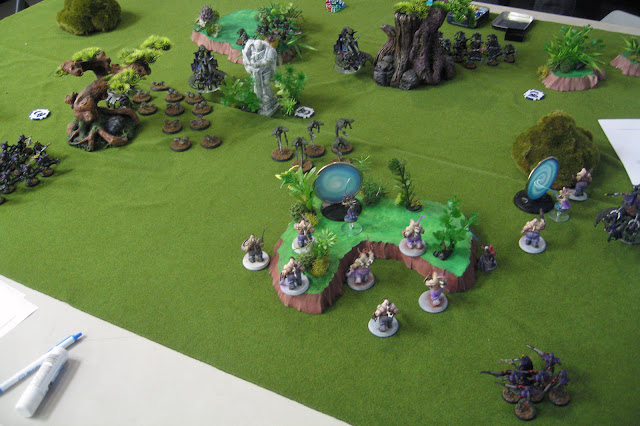 I'm completely surrounded!  He opens with the flamer template, wounding twice.  I allocate one to each haemi to avoid instakilling grotesques.  Tesla arcs in and I take a ridiculous amount of wounds, dropping down to 5 grotesques.  I pull the lead models and knock the wraiths and scarabs out of assault range.

Time to spring the trap!  My reserves bring in the trueborn on foot, wyches, one unit of warriors, blaster scourges, and one talos.  Not bad, but I didn't want two of my three scoring units this early.  I was really hoping for both talos or some beasts, but I try to make do. 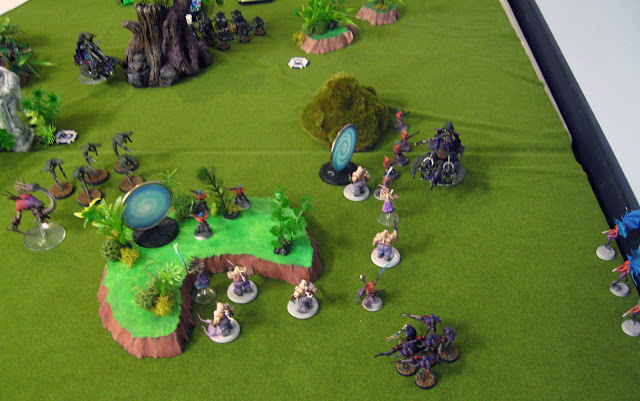 This turn was really difficult for me to manage the reserves.  With 6 blasters on the board, I need to drop the command barge and hopefully some wraiths with shooting.  I also need to deal with the deathmarks in assault.  Trueborn become a suicide distraction unit and come in right in front of the wraiths to bait them.  Scourges fly up the flank board edge to try and outrange the tesla immortals.  Warriors come in to blast the command barge and use the hill as cover.  I'm banking on scourges or warriors dropping the barge so my archon and grotesques can assault the deathmarks. 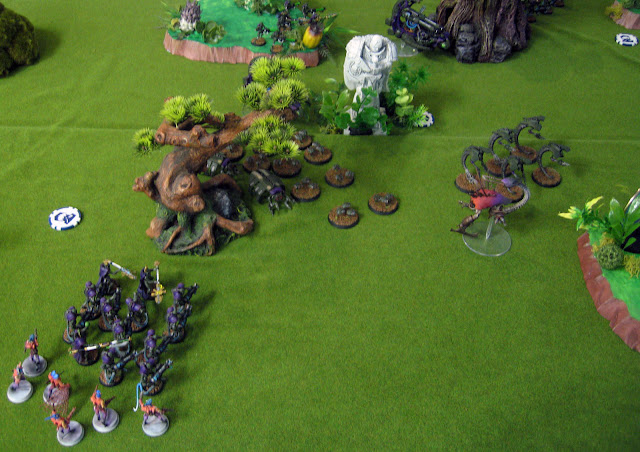 The talos is immune to str3 scarabs so I gamble with the portal in terrain and get a good roll out.  Wyches come in on my board edge to try and beat the immortals in combat in hopes I can sweep them and not fight a long fight.  Shooting starts well with the scourges wrecking the barge.  Warriors open fire on the overlord, but cause no wounds.  Wraiths save the trueborn shots.  Grotesques and archon charge the deathmarks and mostly wiff, winning combat but unable to break the necrons.  Talos plows into scarabs, killing several bases and a few more with no retreat wounds, but remaining locked.  Wyches assault immortals with attached crypteks and overlord.  Gaze of flame knocks off my extra attacks and I lose one wych to mindshackle scarabs.  I do win combat by one, but the necrons won't run.  Every single immortal I killed stands back up.

Turn 3 begins and Dean has some tough decisions to make, which is my list's forte.  He sends the de-meched overlord after my scourges.  Wraiths come after my warriors 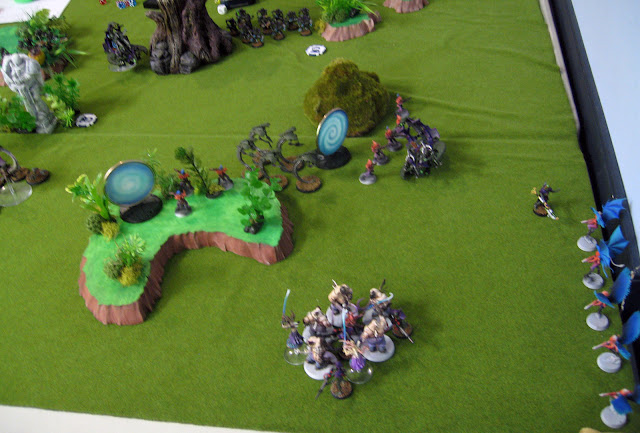 Spyders come towards the wyches, I think he doubted they could handle the talos. 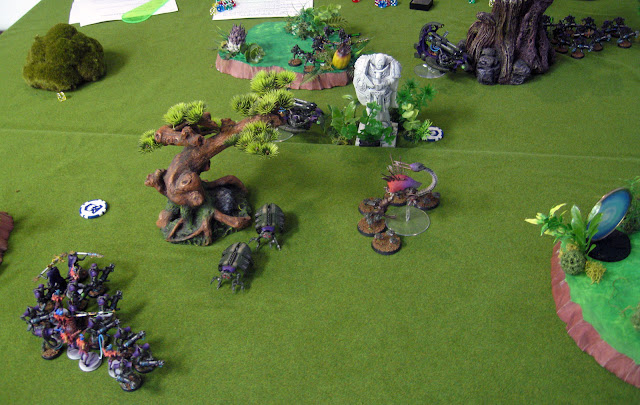 The good news for me is everything except trueborn is out of sight, range, or locked in combat.  The bad news for the trueborn is the entire necron army fires on them and they die a horrible death.  The lone overlord assaults the scourges and mindshackles one who wiffs.  Four scourges land two wounds and Dean fails two saves.  The lord misses with every attack, fails his morale test, and gets chased down by scourges (EPIC!).  Wraiths wipe out the warriors.  Talos kills 1 base and remains locked.  My wyches actually lose combat to the immortals and run off the board.  Grotesques finish off the deathmarks and consolidate towards the wraiths.

I lost several units last turn, but the at least a couple units are free from combat now.  My reserves give me my last scoring unit, heat lance scourges, beasts, and the second talos.  I'm pretty sure I can cripple him with those units, the key will be protecting my only scoring unit.  Scourges come in the central portal and get within melta range of a barge.  Archon and grotes head for the wraiths. 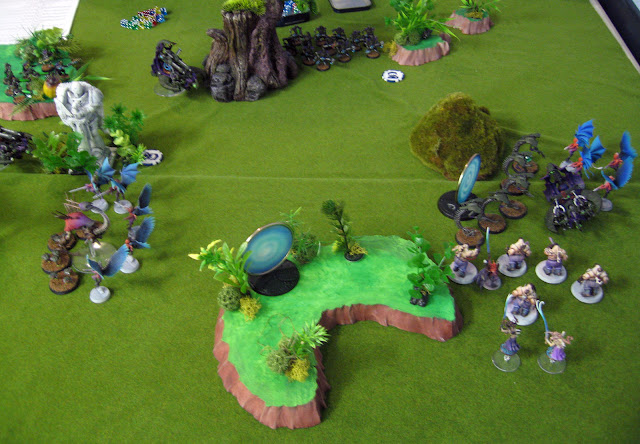 I bring the beasts and talos in from the board edge to go after immortals and spyders. 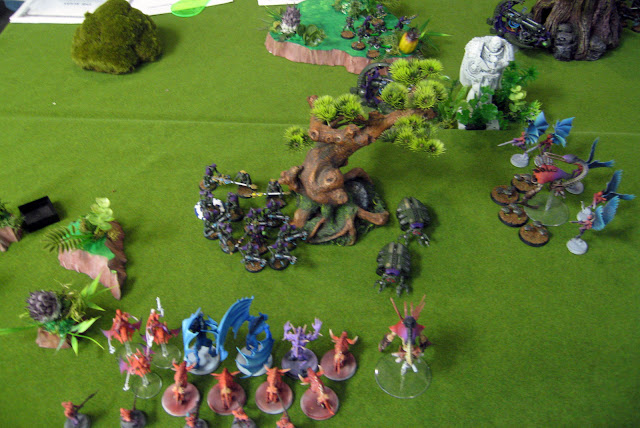 Archon and scourges combined are only able to drop one wraith.  Grotesques assault in and both sides take casualties.  The central talos finishes off the scarabs.  The bottom talos deals three wounds to spyders and takes two in return.  Beasts and immortals exchange blows, but I don't get any rends and his armor saves and hot.  I kill a few and we lock. 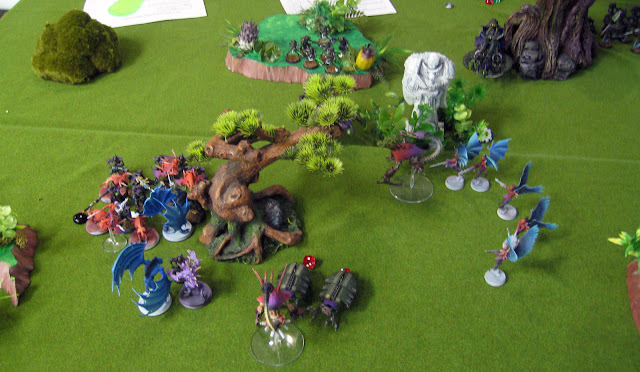 Half of our units are locked in combat, so Dean pivots and repositions his barges, warriors, and immortals. 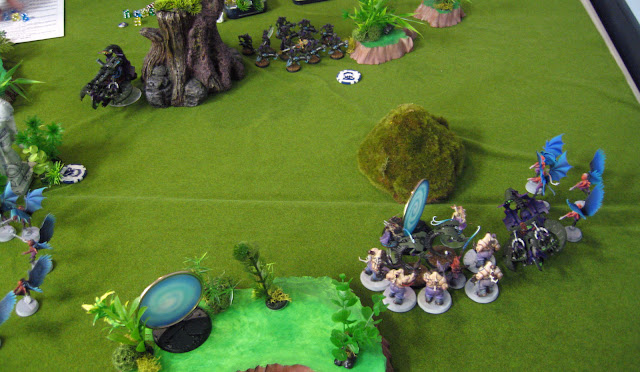 I lose the whole blaster scourge unit to tesla death.  Lance-teks drop the central talos.  Heat lance scourges are saved by some good rolls.  In assault, my remaining talos finishes the spyders.  I lose a haemi and a couple wounds on grotesques to wraiths.  Beasts finish off the immortals with crypteks and overlord and consolidate towards the necron warriors.

My turn 4 brings my venom unit as my last reserve.  I bring it on flat-out on the flank edge to out range the barges.  Scourges reposition to block in a barge. 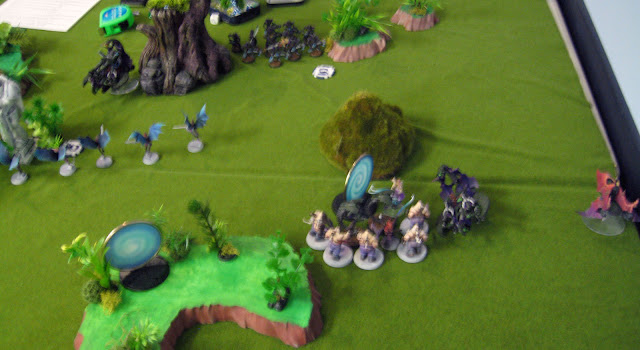 Beasts advance on warriors, talos heads for the closest barge, and warriors head for an objective. 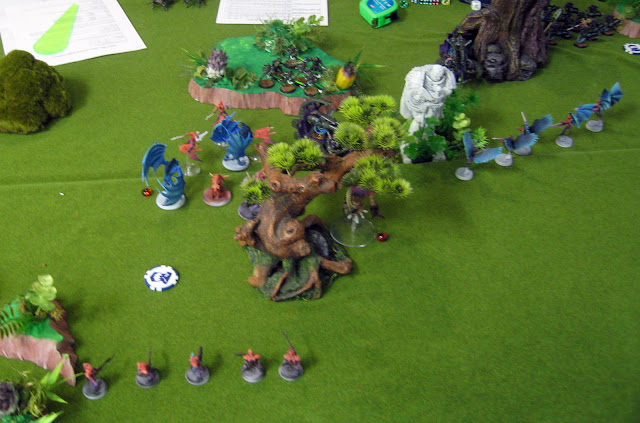 Scourges wiff.  Talos assaults and explodes the central barge.  Beasts assault and wipe out the warriors.  Grotesques continue to beat on wraiths and start getting wounds through, but we're still locked.

It's now the top of 5 and we're nearly out of time.  Complicated assaults from turn 2 until now have bogged us down.  Dean moves his last scoring unit onto an objective, trying to encircle it from my venom.

The last barge fails to kill the talos.  Immortals drop three scourges.  My grotesques finally finish the wraiths and consolidate towards the immortals.

My turn 5 begins as they call five minute warning.  I move the venom flat out directly onto the hill behind the immortals and into contest range, but it crashes and burns with the trueborn.  Grotesques move into assault range and beasts move through cover and fleet.

Both units end up making it into assault and wipe out the last immortal unit.

Time is called with only an annihilation barge left and me holding one objective for a 20-3 win.

This game was exactly the kind of challenge I was looking for out of the tournament.  It was a very tough list and gave me a lot of respect for necron resilience and firepower.  My opponent's RP rolls were way above the curve and those wraiths took forever to kill the way he was rolling.  However, his dice totally abandoned him when my scourges killed his overlord in assault.  I had my fair share of bad luck when my wyches ran away from immortals and my cover/FnP rolls (should be about 75% success with 4+/4+) were probably 33% or worse for the first two shooting phases.  His list definitely has the means to defeat mine, but it would require some tough decisions and really careful movement.  I won't go any further than that because I want to play this army a lot before everyone figures out how to break it.  Anyways this game embodies just about everything I envisioned when designing the list.  I want to be able to take an unpredictable variable (my reserved units as they arrive) and apply it to my opponent's formation to create the best results possible.  Dean played really aggressively which probably jeopardized too many units, but the power of the list was there to punish me if I had made more bad decisions as to where to commit each unit as it arrived.

So after this game, I'm 36/40 with a 26/36 paint score (army wasn't finished or based) and was sent to table #2.  Jay and Paul were about to play a GK on GK slugfest on table #1.  I was paired with an army that I never even ran through my head in theory hammer.  Stay tuned for my 3rd game against daemons led by Fateweaver!
at 10:50 PM