Posted by hyv3mynd
Well, this tournament is for the best of the best so there won't be any easy pairings here.  For my second game, I drew Jay.  For those of you who don't know him, Jay is the wizard of OZ behind the curtain of DaBoyz GT.  He also took 1st at our local Ardboyz qualifier as well as 1st at the semifinals.  He also plays nids and his list was:

So he's got 2 tervigons to my 1, 2 units of hive guard to my 1, almost twice as many genestealers as me, venomthropes, and a trygon.  Again, I found myself wishing I brought a less-compy list...

Game was spearhead annihilation.  Jay won first turn.  I deployed my spore mines in the front center of his zone.  He deployed his tervigons center with venomthropes and hive guard nearby.  Termagants went in the area terrain behind, gargoyles and shrikes on my left flank.  I'm in a real pickle here.  I can do some damage with my reserves and shooting, but he's gonna roll me in cc.  He has nothing to penetrate my tfex armor so I put him out front with my prime who is attached to hormagaunts who are strung behind the tree for cover.  This is to give me sitw on the front line and a high initiative screen unit.  All my dakka goes behind the screen.  He infiltrates both genestealer units on my right flank and I  place mine there also. 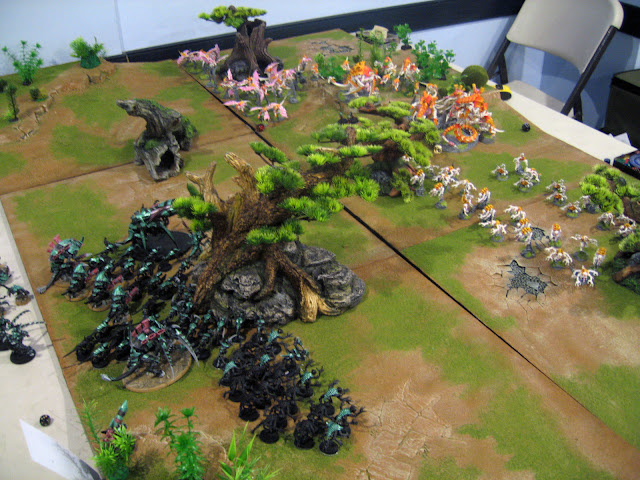 I fail to seize.  Jay jumps his flyers further to my left. 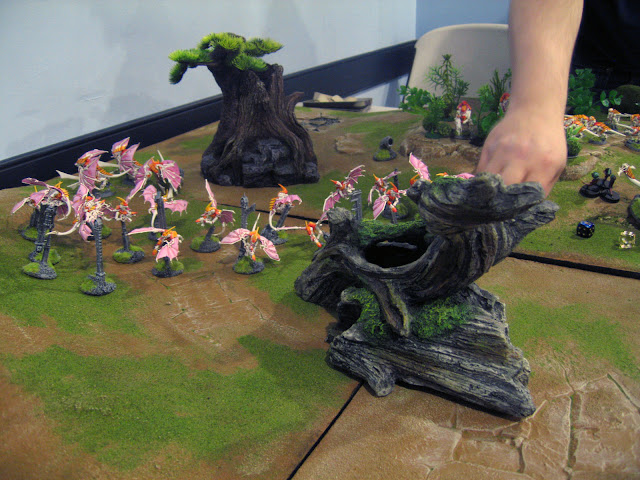 Everything else advances.  He moves his genestealers up a couple inches and plays it safe out of my assault range unless I roll a 5 or 6.  His big unit of stealers gets FnP and his tervigon explodes my mine cluster. 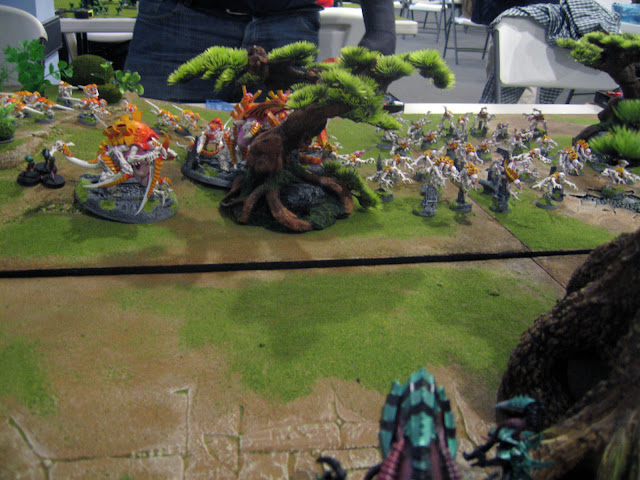 His shooting kills a few hormagaunts.

I shuffle everything around a bit, but not too much.  He has way more assault power than me and I have more shooting.  The hormagaunts and prime get FnP. 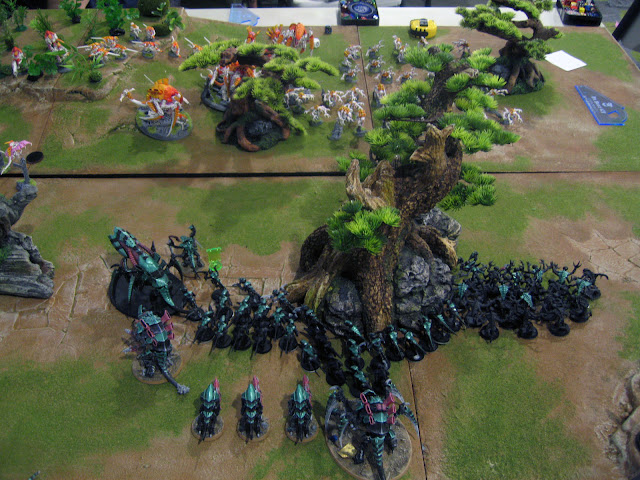 My tfex splatters two of his shrikes with the rupture cannon.  Dakkafex kills several gargoyles.  Hive guard and devilgaunts drop a few genestealers from the front unit.  Looking back, I should have focused fire more.  I knew those shrikes would wreck my MC's, but they were probably out of assault range this turn.  Genestealers and gargoyles had FnP so splitting fire caused casualties but not enough to save me later turns.

Jay shuffles up central and right flank units.  He jumps the gargoyles up for assault.  One tervigon spawns a bunch of gants without doubles.  He attempts catalysts, but has moved his tervigons into sitw range from my prime and perils on both tervigons but the genestealers get FnP. 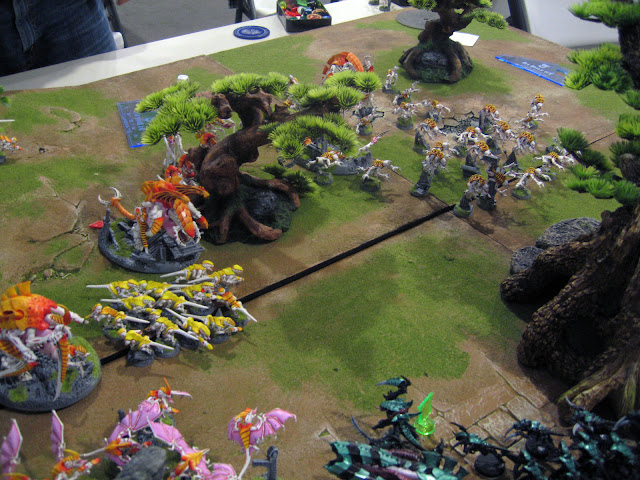 He assaults the tfex with his gargoyles and prime + hormagaunts with termagants.  He loses several gargoyles and almost the full unit of termagants, but both combats lock.

I give my genestealers FnP and move them up.  I'm going to have to assault into his venomthrope bubble, but with the shooting casualties I'm inflicting I should have an advantage.  I spawn a bunch of gaunts with doubles.  Hive guard kill the last shrike.  Dakkafex and devilgaunts drop a couple more genestealers. 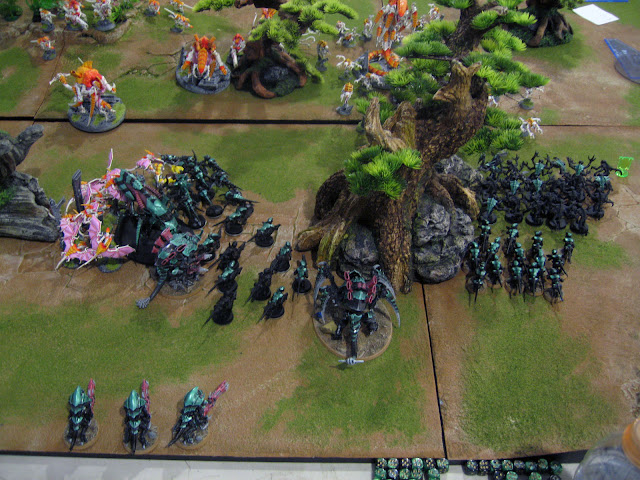 I assault his genestealers, lose 3 of mine to spore cloud and 5 more to his swings.  I knock his big unit down to 6.  In the center, my tfex kills a couple more gargoyles and my prime + hormagaunts finish the spawned unit of gants.

Jay spawns two more units of gants and moves everything up for some massive assaults. 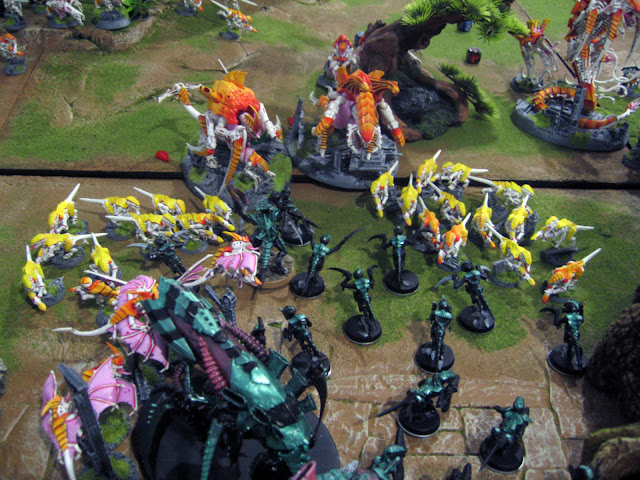 He gets another catalyst off despite my sitw.  His shooting drops several hormagaunts and decimated my devilgaunts with cluster spines and impaler cannons.  He double assaults my hormagaunts + prime with the 2 new units of termagants.  He throws 15 more genestealers, venomthropes, and trygon into my genestealers. 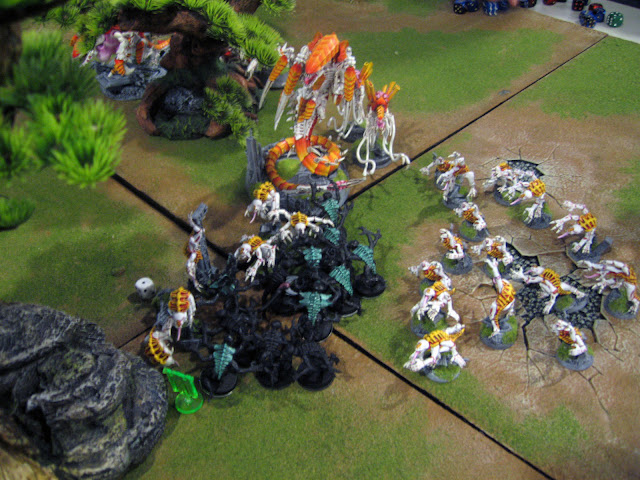 I'm unable to finish his original unit of genestealers and he wipes mine and hormagaunts, but my prime holds.  Tfex kills a couple more gargoyles.

My turn 3... My ymgarls and lictors arrive thank god.  Ymgarls head for the center of his army, I'm going to have to rake in as many KP as possible.  He's outnumbering me with killy units and I'm at a loss on how to hold him off.  I inflict a few casualties with all my shooting. 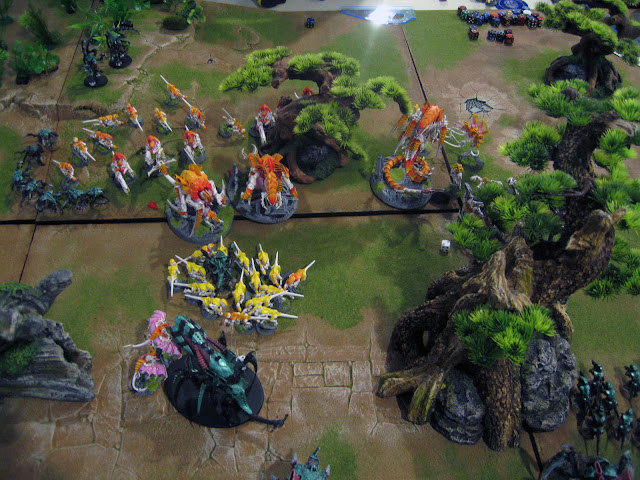 Ymgarls assault termagants and hive guard.  I inflict many casualties on the gants, suffer none, and kill 2 of the hive guard with no retreat wounds.  His gant swarms kill my prime in the center.  Gargoyles and tfex both wiff.

He moves up gants to swamp my carnifex.  He pulls genestealers back to protect their kp's.  One tervigon heads for my ymgarls, the other heads for my tfex.  His unengaged hive guard shoot for my lictors but I pass all cover saves. 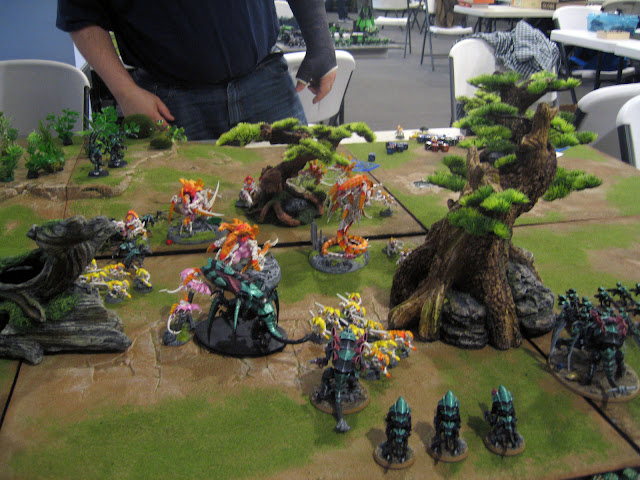 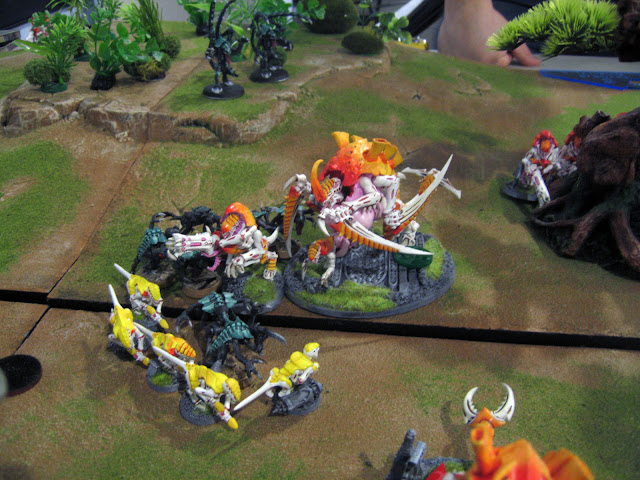 Time's running out on the clock and on the table for my army.  I'm also running out of killy units.  My hive guard drop his remaining gargoyle.  Lictors come out to assault. 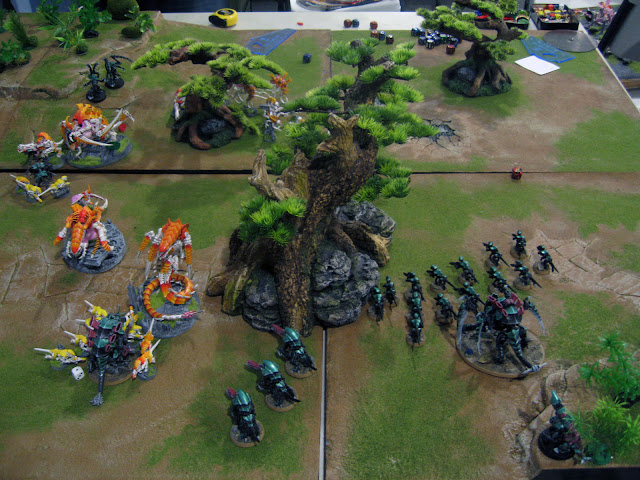 In assault, my lictors kill his tervigon which explodes his gants.  My ymgarls finish his hive guard.  That's a 4kp turn for me but I have no place to consolidate. 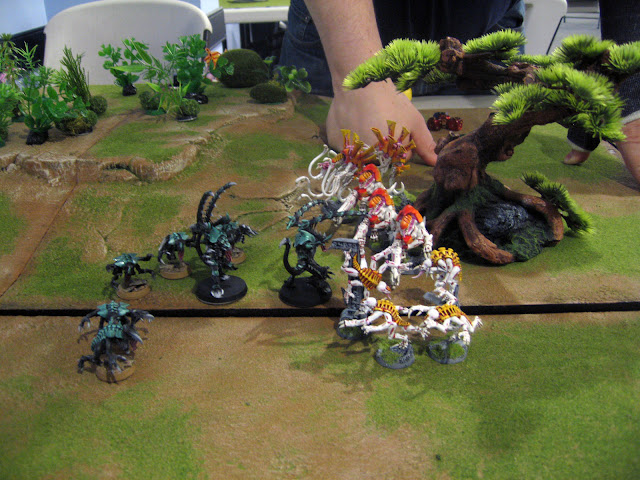 We're really fast playing now. Jay moves up to assault my lictors.  His hive guard open up and I go to ground.  He ends up assaulting my lictor only and I smear a couple genestealers before the last one goes down.  His tervigon smashed my carnifex and trygon hits my hive guard but I survive.  His other unit of genestealers assaults my spawned gants and we both inflict casualties but hold.

This will be my last turn.  My hive guard are definately going down so I need 1kp to draw or 2kp to win.  My ymgarls chase down his remaining genestealers and I throw my tervigon into his other stealer unit.  My ymgarls succeed, my hive guard go down, and my tervigon wiffs.  Game ends.

Well, that could have gone worse.  I was expecting to lose this one too considering he had 2x as many stealers as me, 2x the catalyst and tervigon support, and 2x the hive guard.  I made a couple mistakes like clustering up my infantry for his templates.  I probably could have played my MC's better also, but I pulled a draw against the best player in our city so I'm ok with that.
at 8:09 PM