Posted by hyv3mynd
So with my work closed this week until after the New Year, I threw out some challenges to get some more league matches under my belt and bring out the best of the best.  Jay was gracious enough to accept my challenge.  I told him I was working over some NOVA concepts so he brought a hard-hitting mechanized SoB list. 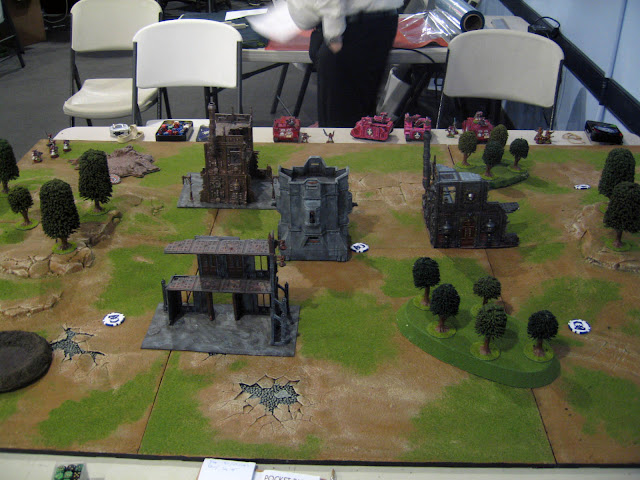 The pre-game:  I've never faced sisters, but I've read several batreps with them so I have a basic understanding of what they do.  A mix between guard and marine stats and weapons with faith points for extra potency.  Jay's list has 8 vehicles, tons of shooting, and a couple cc units.  I've got my standard hive guard and 3 venom cannons to try and pop the tanks at range, but I doubt it will end up being enough.  I make my primary goal to play the objectives and take whatever opportunities arise.  I plan to run a solid mass nearish the center and jump my high cost units over quarter lines to score late game.

We roll off and I win.  I give first turn to Jay, who deploys his PCS with the non-jump cannoness in a chimera behind the central tower. 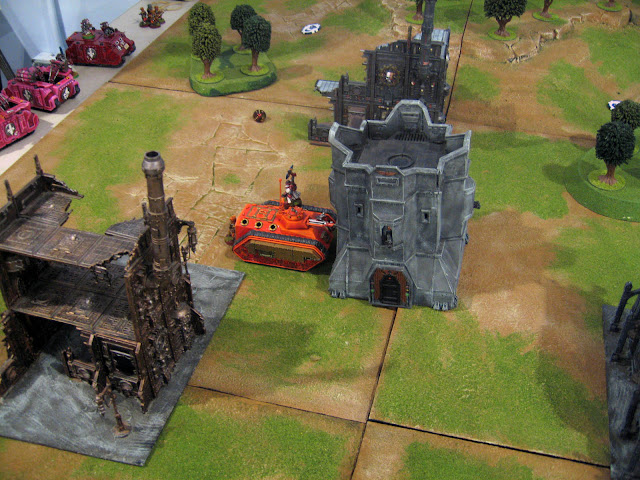 I find nids get picked apart too easily in dawn of war deployment, especially since my deathstar consists of 2 units which cannot deploy together, so I deploy nothing and choose to outflank my genestealers.  I know he can deploy centrally enough to prevent an assault when they arrive, but it's still a 340pt unit for table quarter scoring purposes.  Jay rolls on his entire army. 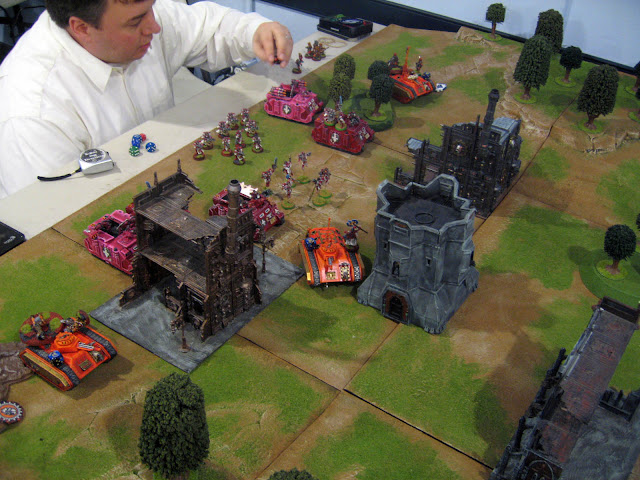 His other two guard chimeras are on the flanks smoked.  He smokes the lead chimera.  Rhinos come up in the center with exorcists behind them.  The heavy bolter team hugs the edge and the jump unit flies up 12".

My turn 1...  Ok, he's pretty spread out.  I'm going to go heavy on one flank but close enough to the center to assault and consolidate to other table quarters when needed.  Tyrant unit and both carnifexs go on the left flank with venomthropes and a tervigon.  Hive guard come up the center for best threat options and a gaunt screen.  I put a lone tervigon on the right flank with some gants as a target and to prevent his from rolling me up from that side.  We're under night fight and most of his targets are smoked or out of range so I run everything for better position.  Hive guard and tervigon on the right get FnP. 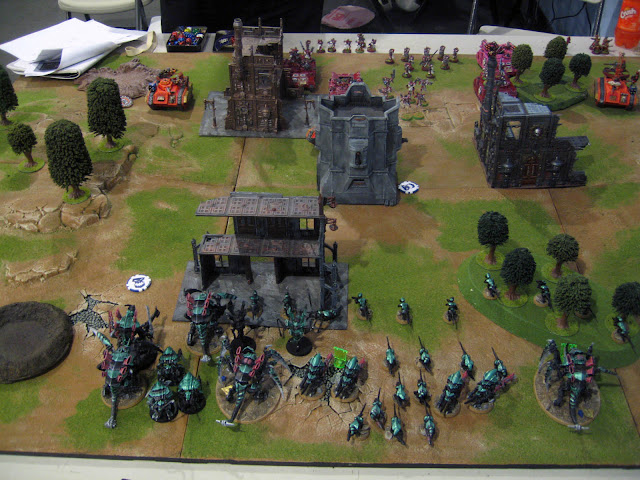 Jay's turn 2...  Some of his vehicles shift slightly for better firing angles.  The jump unit flies up behind the central tower. 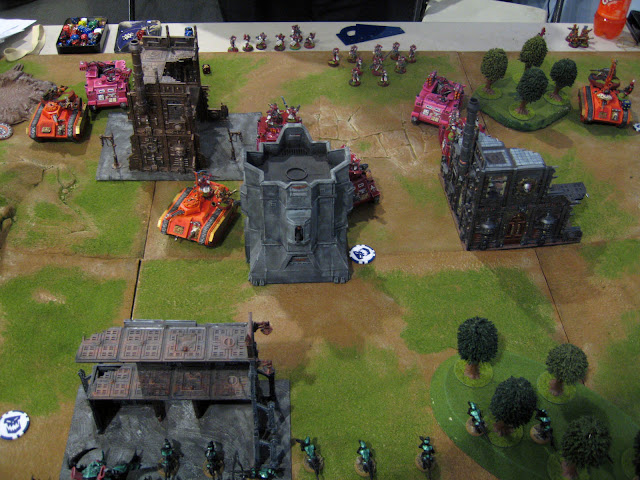 My turn 2...  Genestealers remain out.  I move everything up.  Tervigon on the right and my tyrant unit get FnP. 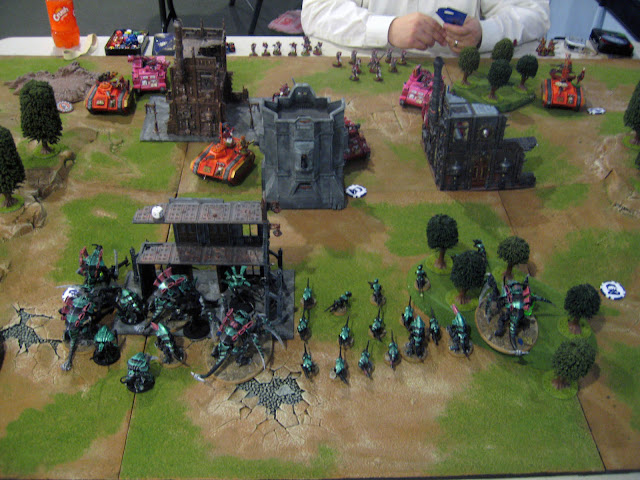 In shooting, I shake the left exorcist and stun the lead chimera.  It's not enough to thrill me, but at least I nullified some ap1 shooting.

Jay's turn 3...  He shifts the shaken exorcist out of sight and the other for a better firing angle.  Rhinos shift around a little.  I can tell he's going to play similar to me, holding the center and zooming into table quarters to score late game. 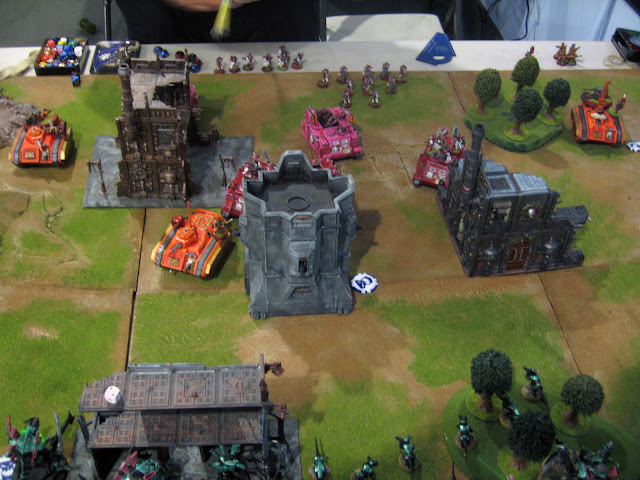 In shooting, he kills another hive guard from the healthy unit.  He also knocks out several more gants.  The guard in the backfield chimeras largely wiff or get ignored by armor and cover.

My turn 3...  Genestealers arrive on my choice of sides.  His placement is pretty symmetrical, so I choose the side furthest from his sister unit with 3 flamers. 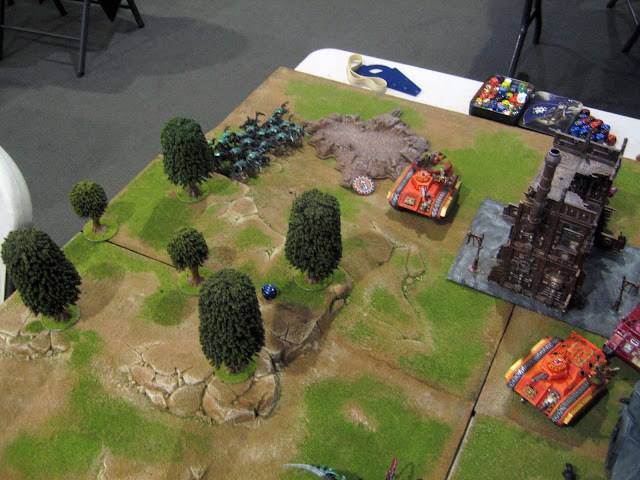 I spawn 2 units of gants - 6 and 8 with no doubles.  They run up to screen.  Everything else advances towards the center and my right tervigon chills in the forest.  This is the point where I push with everything.  I've left the safety of 4+ cover with most units and will rely on venomthropes and hopfully some tank wreckage to provide cover. 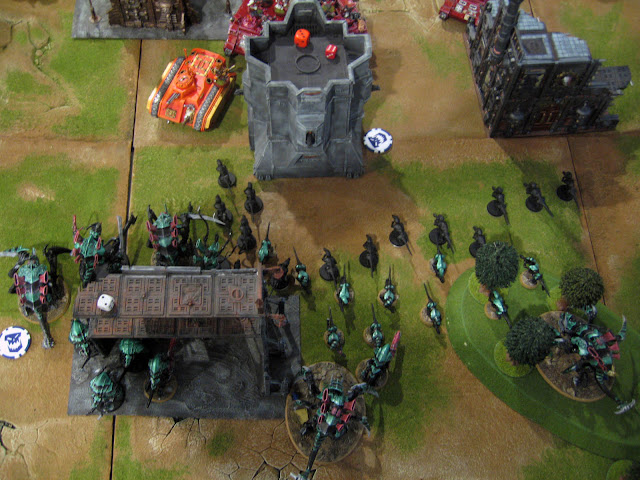 In shooting, my hive guard wreck the lead chimera.  I also immobilize the left flank chimera with a heavy venom cannon. 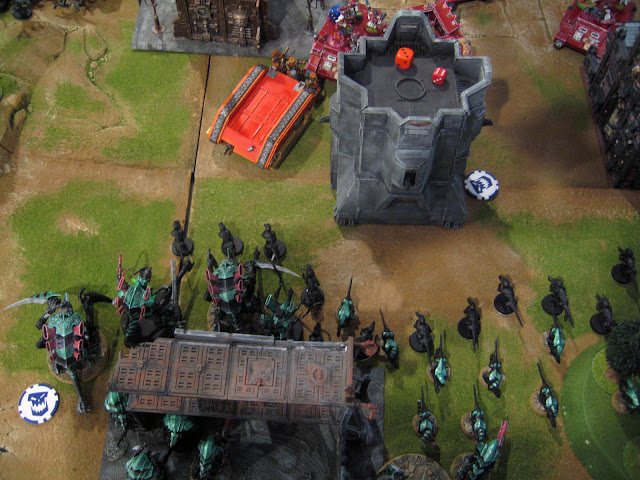 My genestealers fleet and assault the immobile chimea and explode it.  Jay loses 1 guardsmen and I lose 4 genestealers, but the guard pin!

Jay's turn 4...  He really lets me have it this turn...  He jumps up the celestians and cannoness.  The pcs with 4 meltas jump out, and the other cannoness comes up for gants.  Both exorcists now able to fire line up my right tervigon. 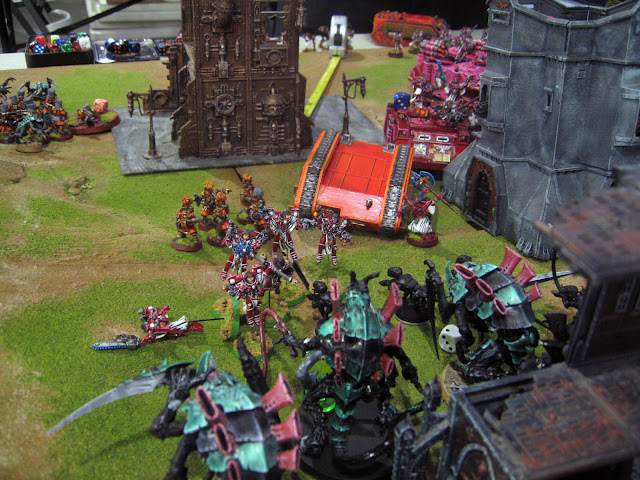 His exorcists annihilate my tervigon and take out 10 gants from the various surrounding units.  The heavy bolter unit mows down 7 genestealers as I fail a ton of cover saves again.  The melta unit puts a wound on the tyrant and one on a guard. 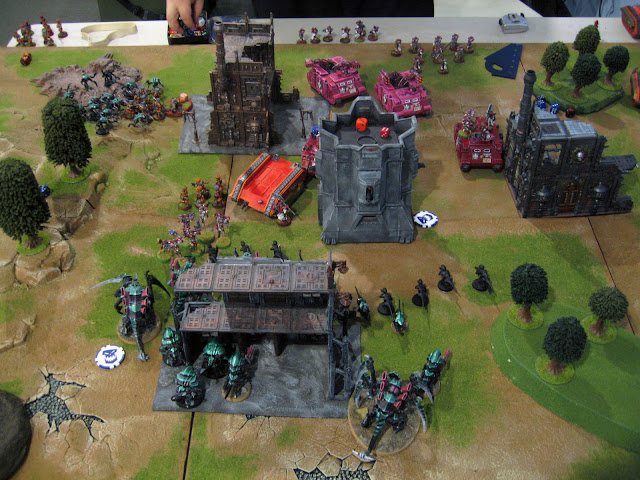 He assaults my tyrant star with his jump unit and makes them all invuln with faith.  The lone cannoness assaults the 6 gant spawned unit.  Everything is in spore cloud and preferred enemy bubbles and my tyrant unit has whips so badness ensues and I kill 4 of the 5 celestians and take 1 wound on the tyrant.  Gants put a wound on the cannoness and I lose a couple.

My turn 4...  Now I'm actually starting to sweat a little.  I've only got a couple hive guard left and I need to start sending my heavy venom cannons into assault.  I move some stuff up and shift around.  I totally forget to spawn gants which was a big mistake.  I decide to use one fex to assault, one to shoot, and venomthropes to assault (big mistake). 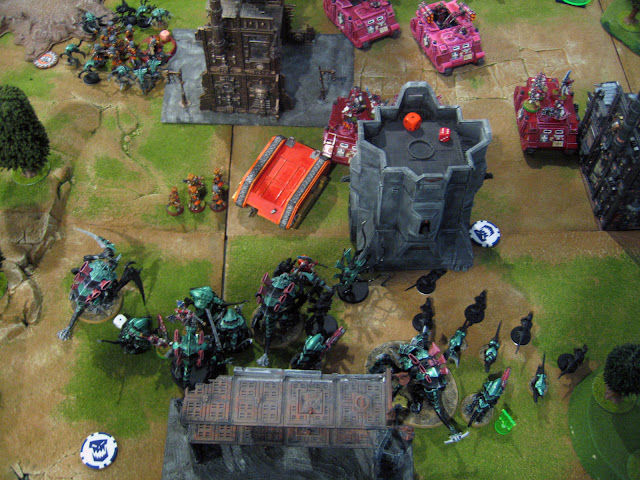 One hive guard shakes and immobilizes one exorcist.  The other hive guard wiffs as does my heavy venom cannon. 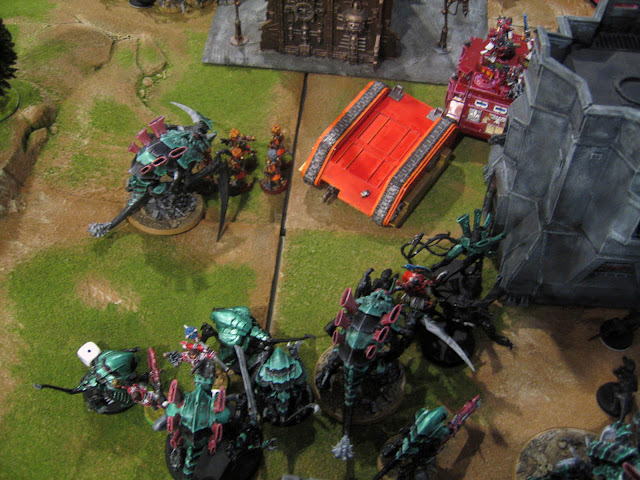 The left carnifex plows into the pcs with meltas and kills 4 but the lone guard locks due to proximity to the sister's book.  Genestealers assault and wipe the guardsmen on the left side.  My tyrant star smashes the cannoness and celestian.  Venomthropes assault the other cannoness and cause a total of 6 wounds between them and the gant, preferred enemy, and poison, but he makes every save!  He kills one venomthrope and I lose the other and gant to no retreat!  Now he has a loose cannoness in my midst for the start of his turn! 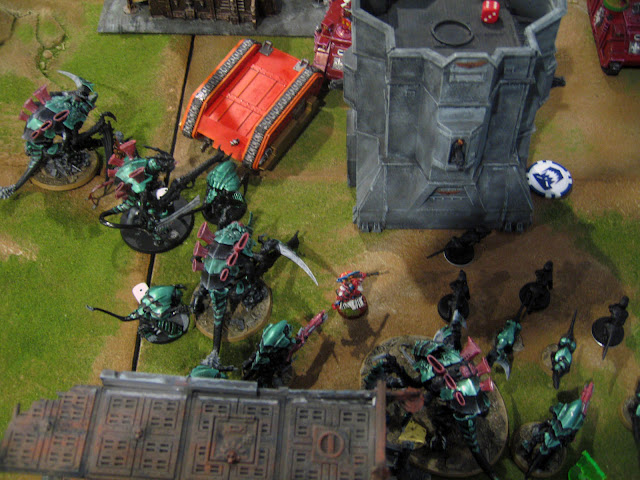 Jay's turn 5...  This is not going to be pretty.  He's got 3 loaded rhinos with 4 meltas and 3 flamers able to strike anywhere and his cannoness available to mop up.  He rolls up all rhinos and unloads the flamer unit. 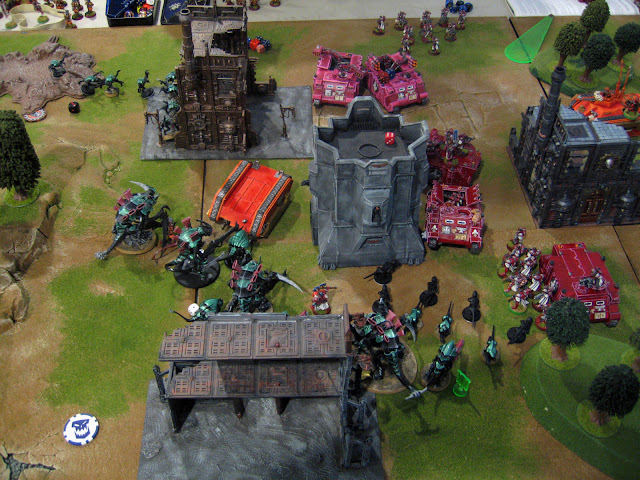 He fires everything into my remaining tervigon, making the unloaded sister unit ap1 with faith.  His dice largely fail him this turn and he only causes 2 wounds.  He does kill a lot of gants with the flamers though.  His mobile exorcist kills the wounded carnifex.  His heavy bolter unit and chimera on the right mow down a ton of genestealers.  Jay assaults my tervigon and only causes 2 wounds!  Tervigon survives and can spawn next turn!

My turn 5... Well, I'm running out of units.  I'm down to 2 hive guard, 1 carnifex, 1 tervigon, the tyrant star, and a few gants.  Time is running out so we deicide to play 1 more turn only so I need to make careful decisions.  I decide to tie up the sister unit with gants and try and kill the 2+ invuln cannoness with my tyrant unit.  Carnifex moves up to the half-way line and I shake the mobile exorcist.  I also immobilize the lead rhino creating a roadblock.  I spawn 8 gants and assault the sisters with them and 3 others.  Careful placement leaves me in poison range but not preferred enemy.  My tyrant scores 3 wounds on the cannoness and she fails her 2+ invuln and is insta-killed!  Gants kill a couple sisters and I lose a couple in return and we lock.  Genestealers (2 left) assault the shaken exorcist and wiff. 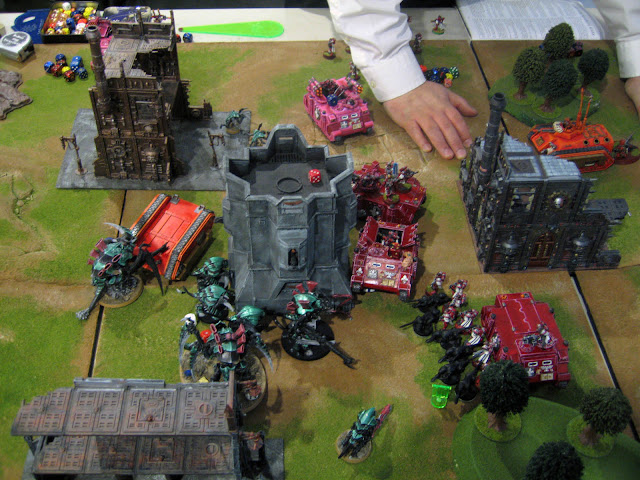 Jay's turn 6...  This is it!  He still has ~35 sisters, 10 guard, and several vehicles, but I'm all in cover and central enough to run into table quarters.  One exorcist is immobile and has no firing arc on anything.  The other cannot shoot so moves 12" behind a building.  The mobile rhino moves behind the bastion. 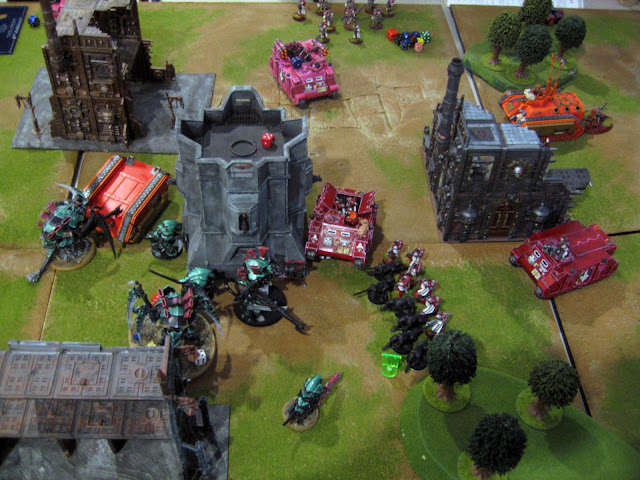 He opts to leave the unit in the immobile rhino for safety.  My tervigon is in cover so he shoots at the hive guard and wiffs!  His other units wipe out my genestealers.  He wiffs on my carnifex also!  In assault, I lose most of my gants.

My turn 6...  Ok last turn.  Table quarter scoring is by pure vp value, so I have my left quarter with hive guard.  I assault his sister unit with my tyrant star which is in the right quarter.  Tervigon and carnifex run over into his left quarter.  I blow up the rhino behind the bastion with hive guard.  We're out of time so we tally everything up. 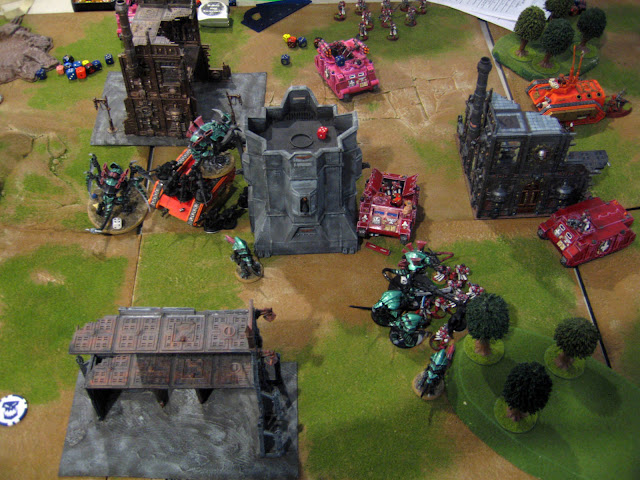 Post game...  Well it was a very tough and close match.  He probably would have beat me is we went to 7 turns.  I made the huge mistake of thinking 2 venomthropes could take a cannoness.  I probably played my right tervigon too far out also as it never had cover or spore cloud.  Everything else went pretty well.  My venom cannons hit almost every time which was uncanny, but I failed many penetration rolls and scored a lot of shakens.  Hive guard and tyrant star rocked as usual.  Not bad for my first game against sisters.  Thursday I get to test the list again!
at 10:29 AM