Posted by hyv3mynd
Man, I'm piling in the games this week!  The local 40k league season ends soon and I need many more games to fill up my quota.  This morning, I challenged Joe who brought his Eldar.  Joe also happens to have the best record in the league right now at 10-1-1.  However, I have not played him yet, muahahaha!

We rolled up Annihilation via Pitched Battle. 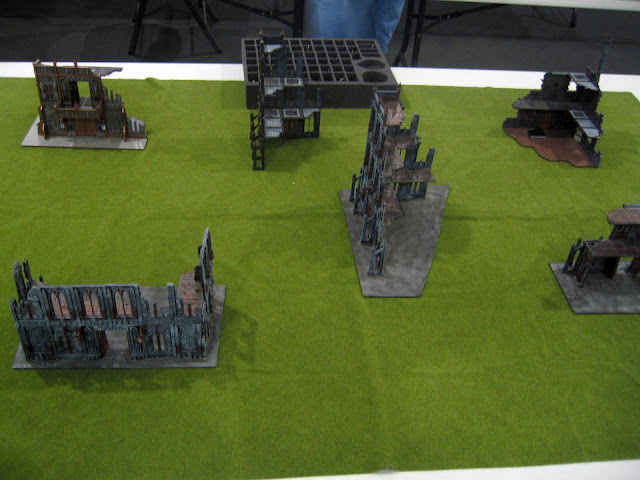 The pre-game:  Ok, this is pretty much my nightmare list... here's why.  #1 his psychic defense also causes me wounds so catalyst and paroxysm are unreliable and dangerous to me.  #2 the combination of doom, guide, and bladestorm is deadly to nids, and he has 2 sniper squads to contribute.  #3 fortuned avatar...yeah.  To be honest, I go into this game expecting to lose and hopefully learn more ways to fight eldar.  My plan is pretty standard, form a big ball of spore clouded, preferred enemy'd, FnP'd, counterattacking, poisoned goodness!

Joe deploys as such: 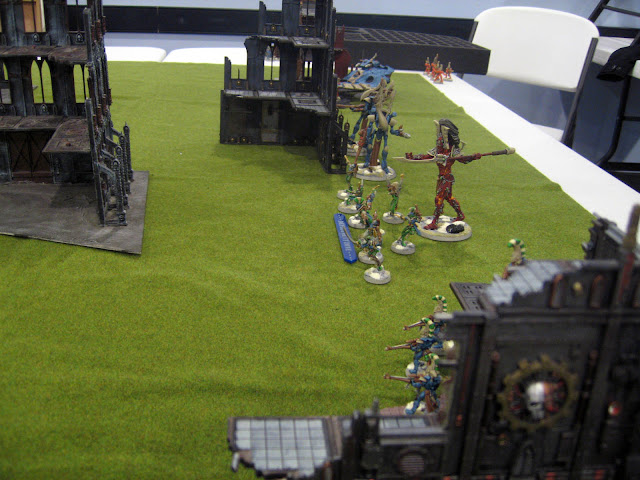 That's the fire dragon serpent on the far edge, 2 wraithlord and eldrad in the middle, avatar, dire avengers, and avengers in a serpent on the bottom (my right flank).

I deploy as such, slightly off center with most of my bugs on the right side: 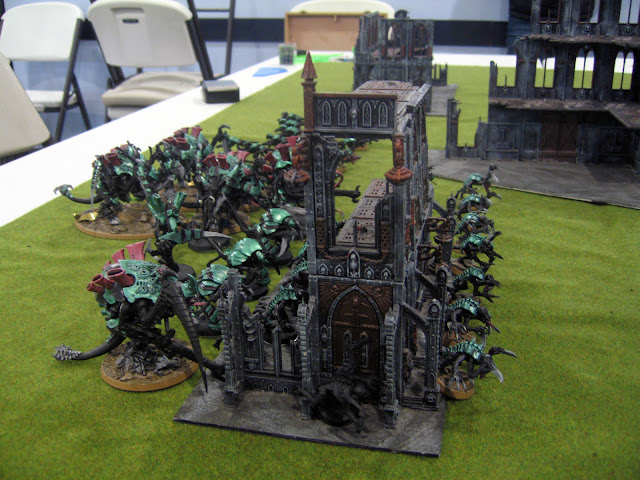 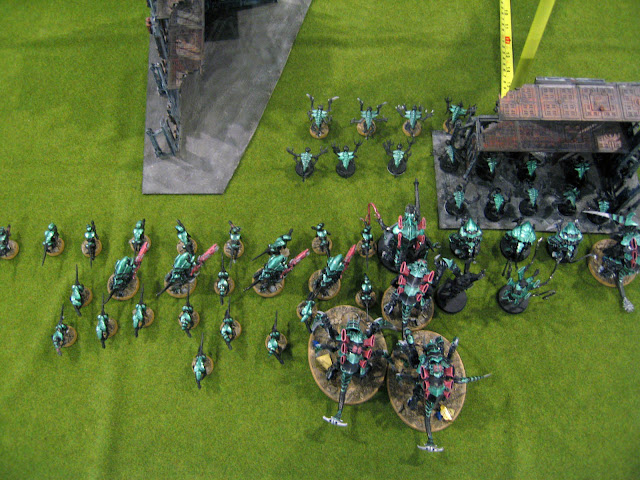 That ruin in the upper left of the picture is about table center so you can see my weight of deployment off center.  Hive guard are closest to center to maximize firing arcs and have 2 units of gants wrapping them for safety.  The tyrant unit leads with most of his guard behind cover.  One carnifex hides behind the tyrant for cover and the other uses the ruin on the far right.  Venomthropes are in the center of the big blob with tervigons in the rear.  My genestealers infiltrate up as far as they can with a majority in cover and within the spore cloud and preferred enemy bubble.

Eldrad pulls his magic shenanigans and the fire dragon serpent re-appears on my right flank next to the other, and the harlequins pop up on the left flank. 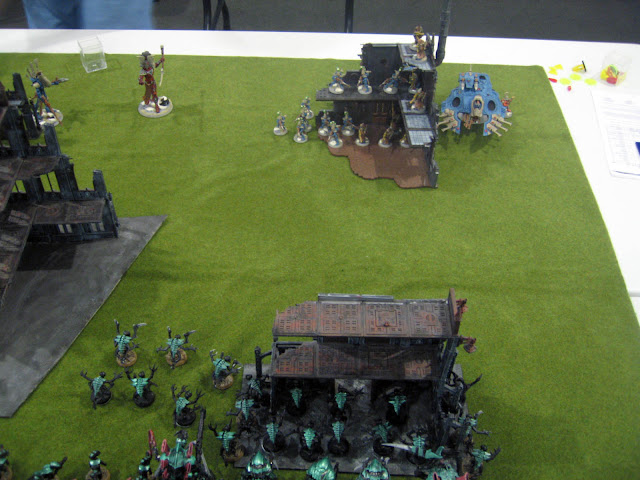 You can see in these two pictures where Joe infiltrated his sniper teams. 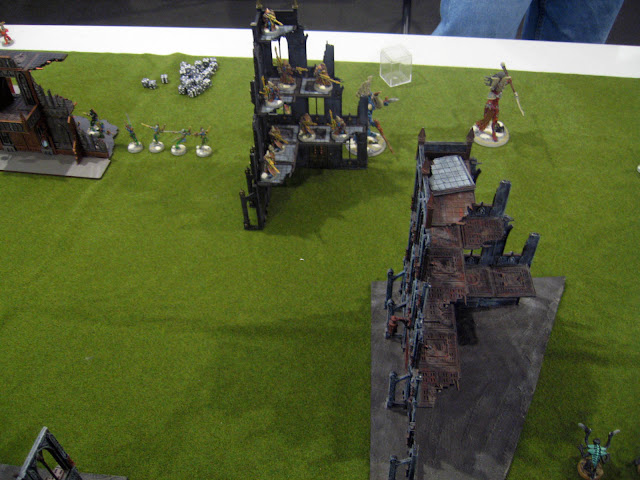 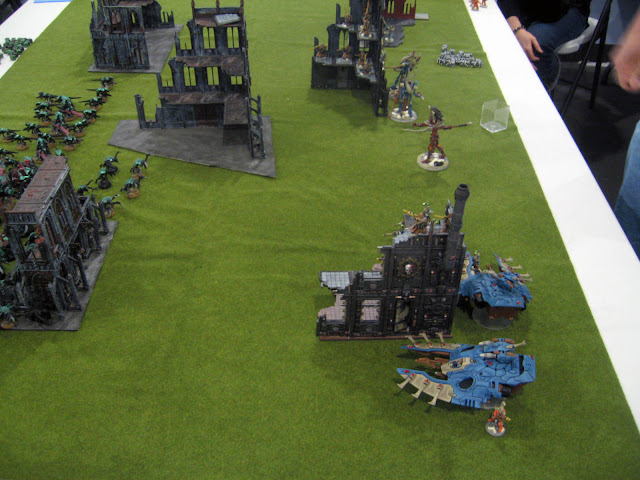 I try to seize the initiative and fail, this is gonna hurt... 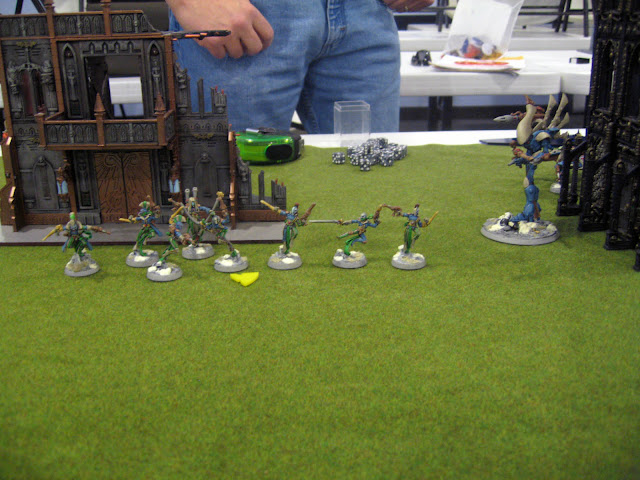 Avatar, wave serpents, and dire avengers move up.  Avengers bladestorm and I fail 7 cover saves, great.  A wave serpent drops another stealer.  Sniper squads open up and do 3 wounds to one hive guard unit.  Wraithlords snipe off the last wound.

My turn 1...  Well, that hurt but I think I still have the tools to make it a good game.  Everything advances with stealers heading towards avengers.  Remember, they moved into 18" to fire so if I roll well, I can nail them. 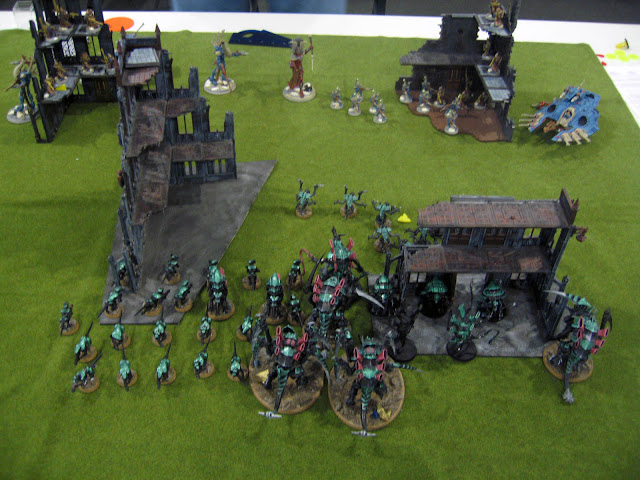 Genestealers get FnP and one tervigon takes a perils.  I open up with 6 impaler cannon shots and 3 heavy venom cannon hits on the top right wave serpent and all I get is a shaken!  Not much luck yet...
Genestealers run 5" towards avengers. 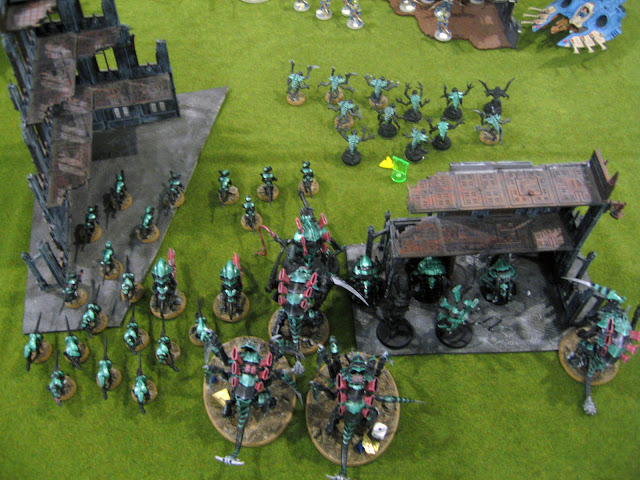 The cheese is doom, the flag is FnP.  They assault the avengers. 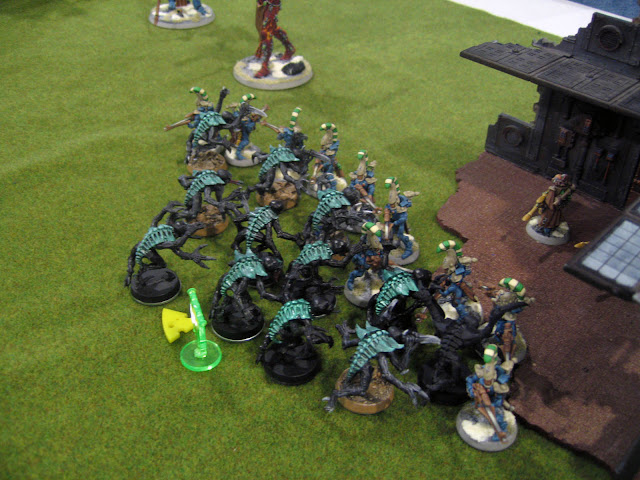 Toxic genestealers do their worst and score 9 rends + several normal wounds... the avengers disappear under the scuttling swarm.  I get a 4" consolidation but it's not enough to get a majority in cover.

Joe's turn 2...  Genestealers get doomed again, snipers get guided, wraithlord gets guided.  He moves the avatar over to the genestealers. 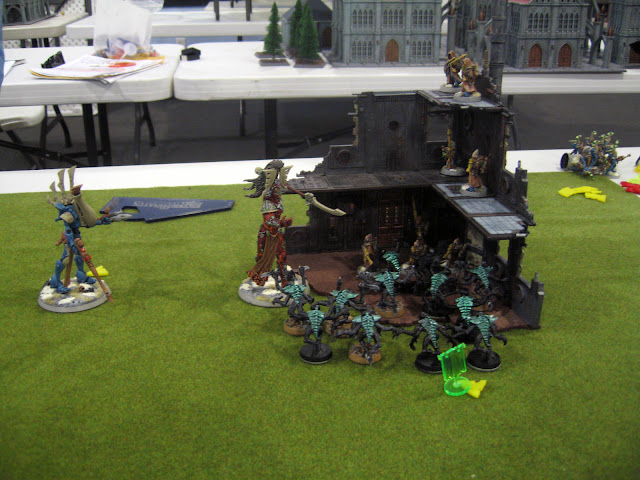 The shaken serpent with fire dragons jumps up and unloads by my carnifex.  He's not in cover from that angle, but he is in the spore cloud. 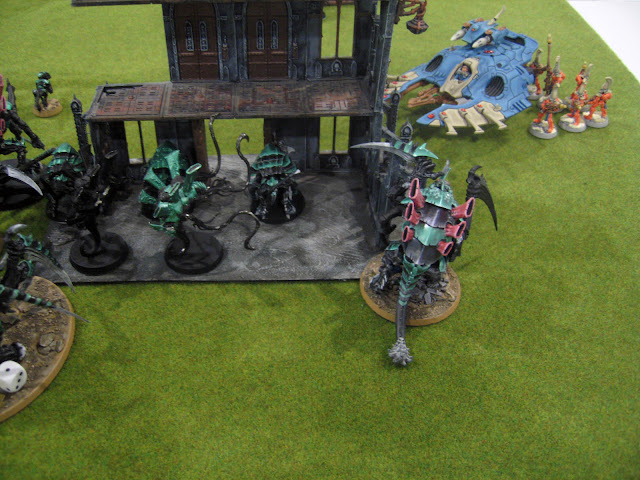 The other serpent jumps center and unloads the other dire avengers.  He fires the wraithlord's flamers at the genestealers first, killing two and giving me majority cover now.  Genestealers take a full bladestorm and go to ground.  3+, 4+ saves later and all genestealers survive, yup.  Snipers put a wound on the already wounded tervigon, however I passes about 4 more cover saves in there hehe.  Dragons land 2 wounds on the carnifex through the cloud.  Poor luck from the first turn repays me big here.  The avatar assaults genestealers, we strike simul, he kills 3 and two of my wounds get through.  My genestealers actually fail morale and fall back into synapse and spore cloud. 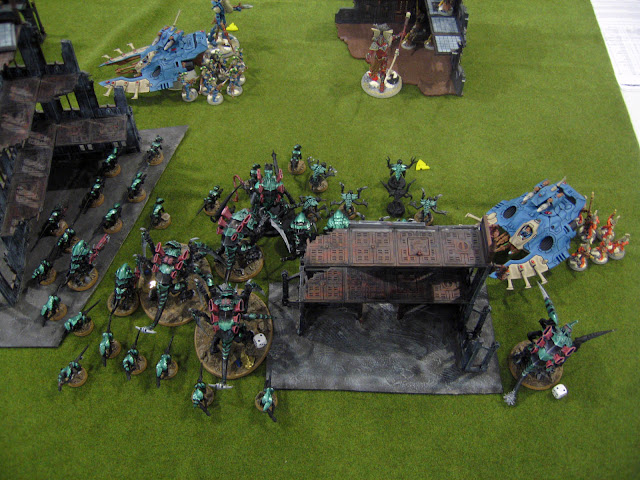 My turn 2...  At this point, Joe said something like "this is going to hurt", and I said "yup"...  Stealers are now fearless and consolidate back towards the avatar.  Hive guard rain spears on the wave serpent in the middle and wreck it.  Venom cannons blast the other and blow the missiles off.  Carnifex begins his stampede into the dragons.  Both tervigons drop cluster spines directly on the avengers and kill 8!  At this point, Joe is pretty much only rolling 1,2, and 3's...
Genestealers run and assault the avatar. 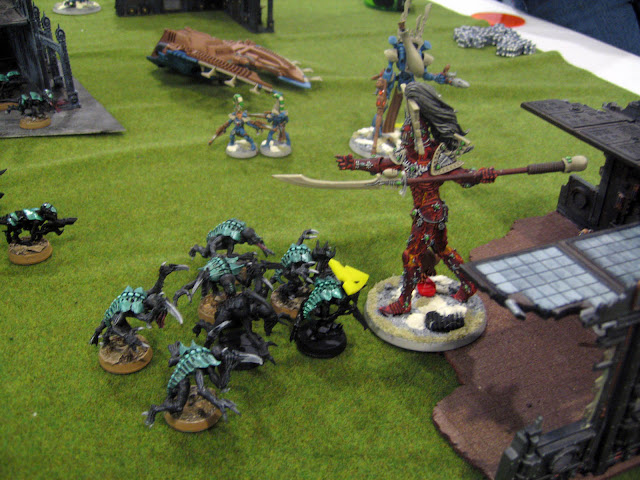 The avatar kills 3 and gets torn apart by the surviving genestealers. 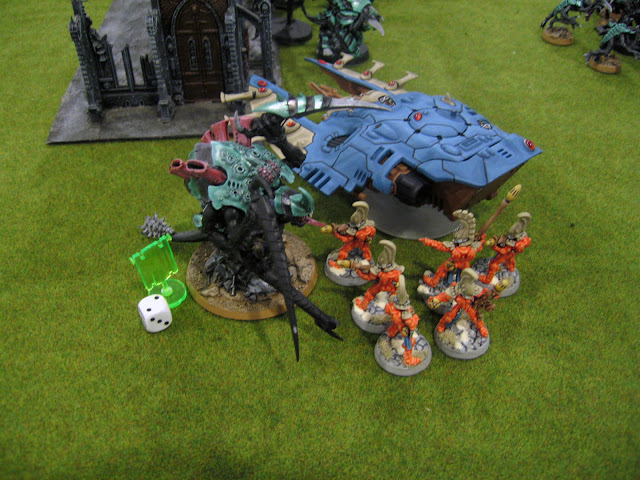 And flattens 4 of them.  The remaining two run away.  Here's the field after the bottom of 2. 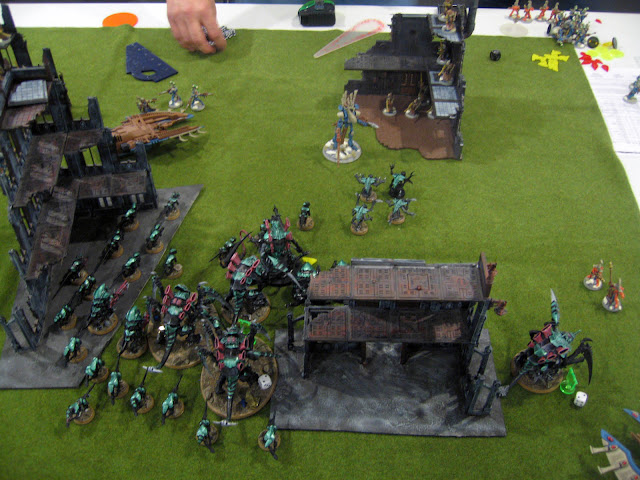 Joe's turn 3...  Eldrad moves up to join the 2 remaining avengers.  My tyrant star gets doomed and mind war'd.  I lose 1 wound.  Harlequins keep truckin towards me (I've been running away from them on the left flank). 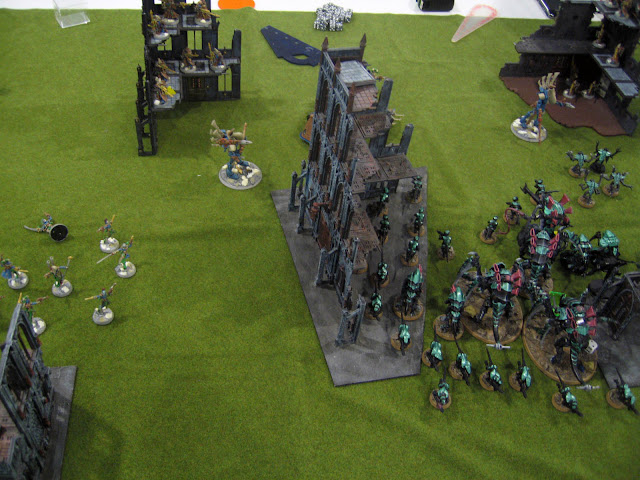 The wraithlords annihilate the remaining genestealers.  Snipers and dragons finish off the carnifex on the right. 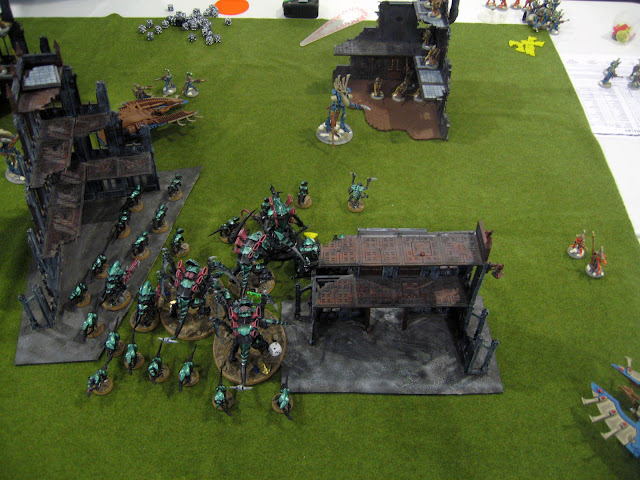 My turn 3...  Here's where the hammer falls.  Eldrad is dead center with 2 avengers, those 2 dragons are in the open, and one wraithlord is within assault range of my tyrant star.  Both tervigons template the avenger unit and drop one.  Hive guard open up... and edrad gets insta-killed!

At this point, we call the game.  Sorry readers!

Here's the breakdown.  When eldrad fell, that put me to 4-3.  I still had firepower to drop the last avenger and dragons, and my tyrant unit was about to steamroll the wraithlord.  That would have been 7-3.  Mysteriously, Joe's family showed up at the game store from out of town too, and my fiancee was blowing up my cellphone at about 3 texts per minute.  We agreed to a rematch sometime in the future.
at 4:47 PM