Posted by hyv3mynd
Saturday 12/11 was the Millennium invitational; the culmination of a year's worth of store tournaments where the top finishers earned invites.  This was a comp (player scored) + painting + battlepoints tourney with 12 players.

My list was designed with #1 comp and #2 painting in mind.  I'm thinking I'll be the newest player there with only 9 months under my belt and only one partially painted army.  Some of these guys have several massive, fully painted armies including multiple forgeworld centerpieces.  My list incorporated some of my "fluffy" painted models with a couple competitive units for punch.

First game was to be d3+2 objectives and dawn of war deployment.

My first opponent was Doug and I think my day was done the minute I saw his list.

Yup, 9 obliterators at a comp tournament...  Anyways, nothing to do but play it out.  Doug won first turn of course.  We rolled and deployed 3 objectives which was potentially the worst result for me as I have more scoring units then him and can also spawn more.  5 would have been a lot better.  Also, we're playing on the table with the least amount of LoS blocking terrain out of all of them lol.  Such was my day.

I drop my spores between two objectives and on his side of the board, effectively creating a 36" diameter no-deployment bubble for him due to DoW rules.  He places 2 plague marine units on foot at the hald way point with a daemon prince behind them.  I'm already off my game here as I'm flustered about pairing off with an "ard" list at a comp tourney.  I struggled with my deployment options.  I really wanted my tervigon on the table, but he has 9 oblits walking on and searchlights.  I should have held everything off the table but I chose to risk casualties to start in good position.  I placed the devilgaunts and prime behind a small hill and infiltrated genestealers near his edge strung out so I could keep them in synapse. 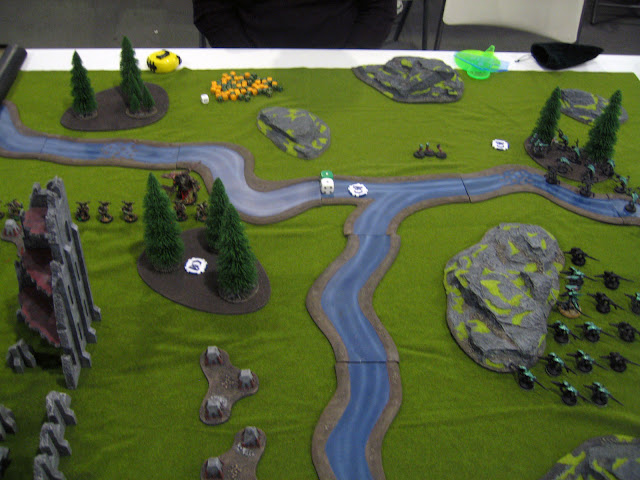 I spread out as much as I can while maintaining cover. 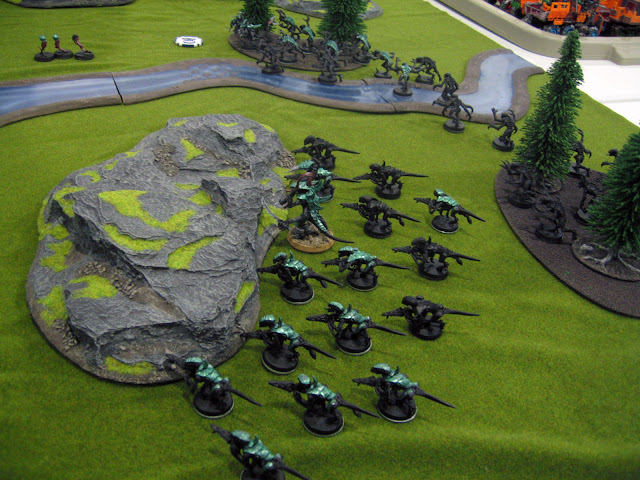 I fail to seize.  Doug marches on all oblits and a rhino with his last scoring unit in the middle.  Two empty rhinos come on in front of the genestealers. 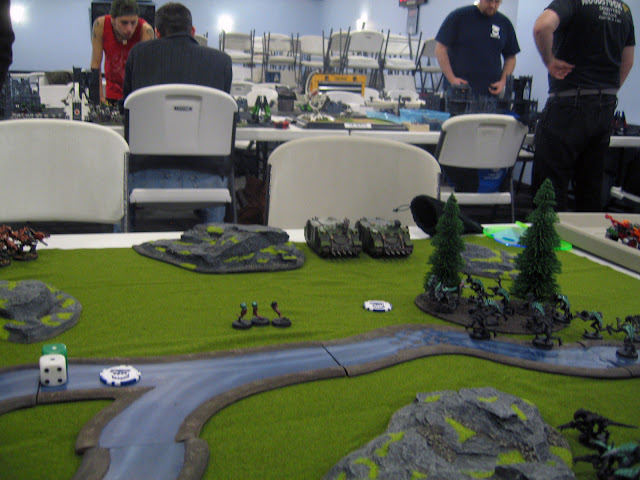 The forces he deployed in the begining march and fly towards my deployment zone. 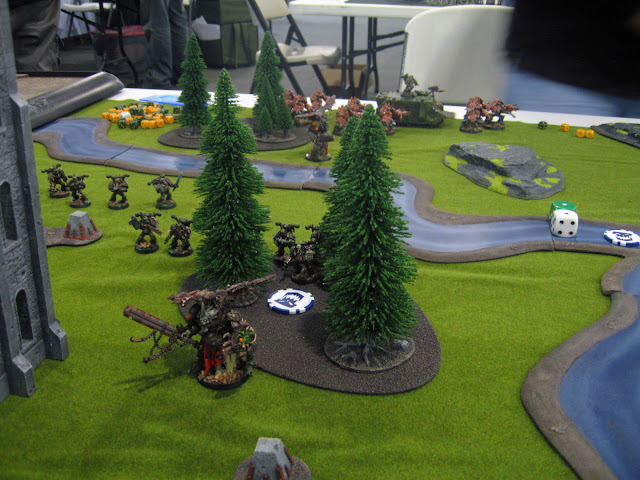 He kills a bunch of genestealers by spotlighting them with rhinos and throwing 9 plasma templates on them.

I bring on my forces in what I thought was good position.  Dakkafex and hormagaunts right in front of the lead daemon prince.  Everything else on the other side of the river to support my gants and stealers. 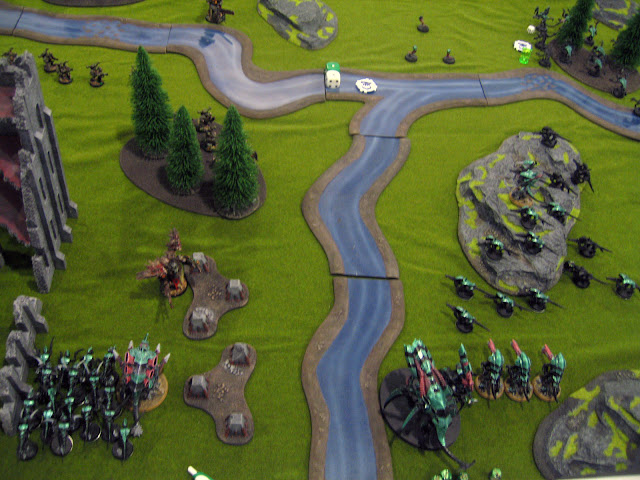 It's still night fight, so I opt to shoot the nearest scoring unit with everything and actually drop several plague marines.  12 twin linked str6 shots, 51 hormi attacks, and 5 carni attacks should be able to kill that daemon prince right?  Nope.  He splatters several gaunts, I do 1 wound, realize I'm out of synapse, and watch the whole unit of hormis run back off the table.  Genestealers run up and assault both rhinos, wrecking one.

Ymgarls and Lictors don't arrive yet.  I move up my forces and spawn gants (doubles) to screen from the incoming princes and greater daemon.  I want the objective in the top right to I continue to chase the remaining rhino. 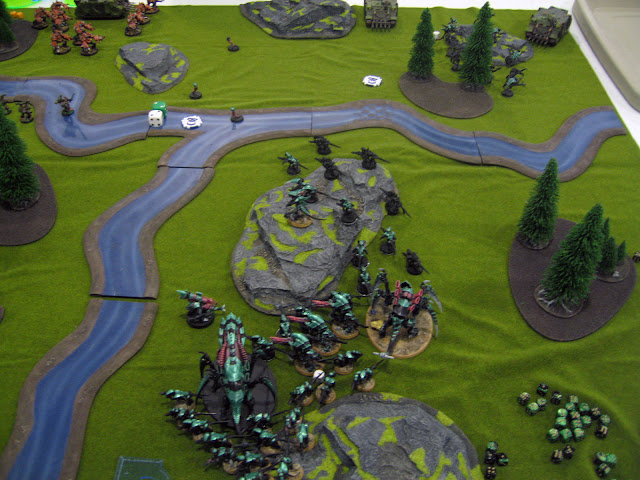 All the good targets are out of range so I kill several more plague marines with shooting.  Tfex stuns the loaded rhino.

Doug moves his monsters towards my mass.  He tank shocks my stealers again and drops plasma on them. 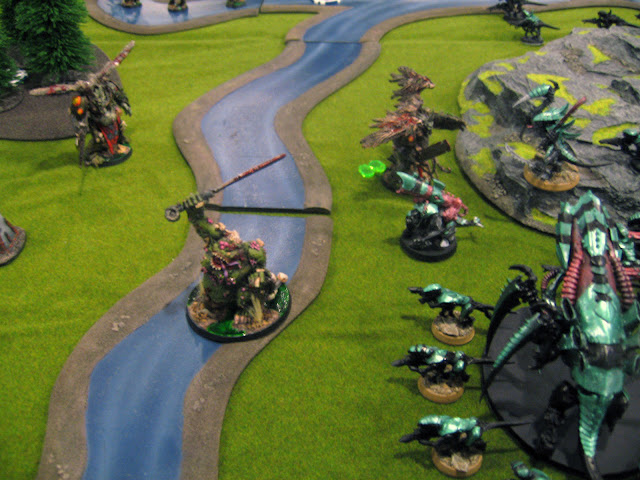 The greater daemon fails to assault and the prince crashes into the prime's unit.  I swamp him with the lash whip and super gants, killing him before he can swing.

Lictors and Ymgarls still don't arrive (bottom of turn 3).  I fortify my side of the river to make him assault through cover.  Shooting largely does nothing for me this turn. 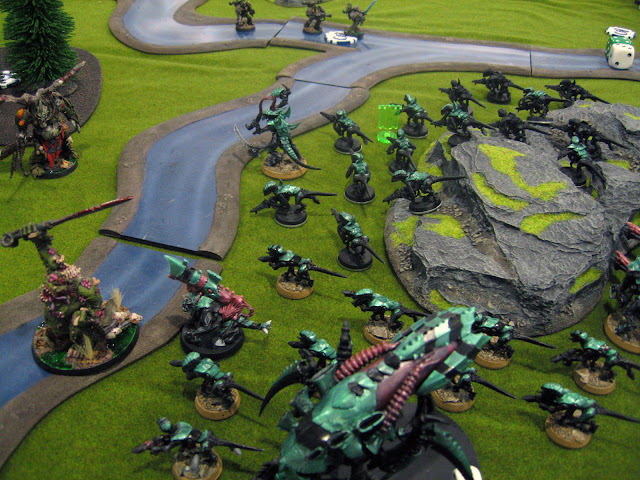 I assault the rhino again and wiff. 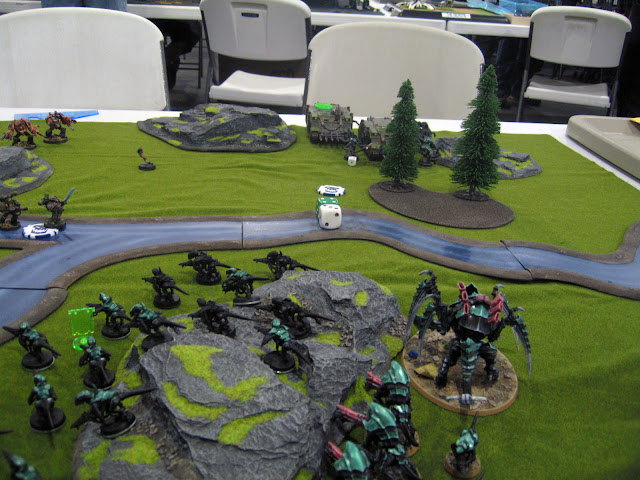 You can't see it, but the left flank objective has been cleared by my shooting, but his monsters are blocking me from getting there.  He has the center objective.  I'm within reach of the right objective but that rhino is running me in circles.

Doug continue to tank shock and shoot my stealers.  They're almost gone now.  He assaults across the river, trying to tie up all my central scoring units. 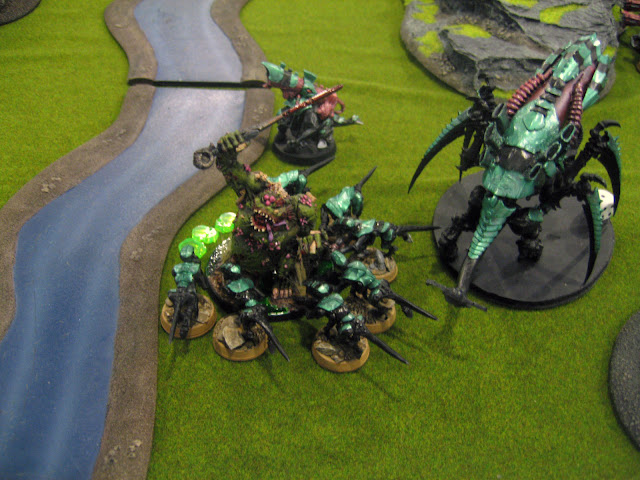 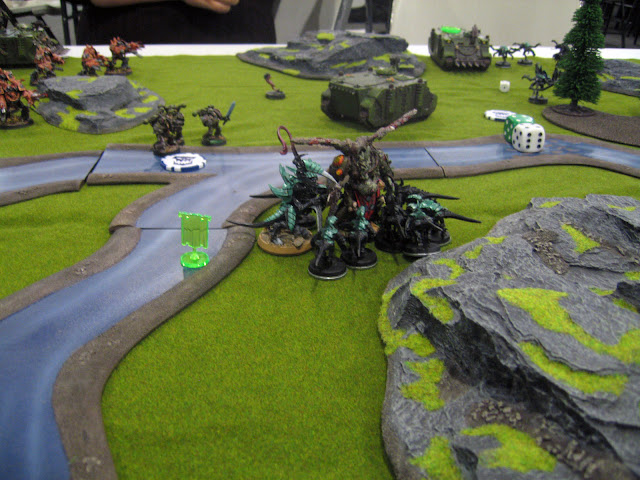 I hold my own, but am unable to kill either.

My turn 4... Lictors and Ymgarls finally arrive amongst his obliterators and loaded rhino.  I'm pretty sure I can hotbox that unit, but realize we have 10 minutes left and Doug doesn't want to play another turn.  So, this is my last chance to do anything.  Hive guard pen the running rhino, and I get a 1...  It's close enough to contest my only objective.  Stealers assault it and wiff.  I have a chance to kill the prince and consolidate to contest his objective, but fail to kill the prince.

So the game ends and Doug has 1 objective to my 0.

Doug played his list like a pro and had me right where he wanted me all game.  It's more obvious looking back now.  If my reserves had come in turn 2 instead of turn 4, I could have tied up his oblits and saved myself a ton of heartache.  Still the biggest lesson here was a reminder of how much I dislike comp tournaments.  I shelved the list I enjoy playing most to conform to the format and ended up unprepared to deal with Dougs list.  Ah well, someone's gotta lose in a tournament and I count my losses as learning experiences.  I should have held everything off and come on right in his face on my left flank.  I would have rolled that daemon prince with my prime, fex, and super gants, and been close enough to his plague marines to make mass plasma templates risky.  Failing 4 consecutive reserve rolls was pretty epic too.  Doug went on to win Best General too, I'll have to challenge him with a real list sometime!
at 11:38 PM