Posted by hyv3mynd
This was my second game on Thursday.  For this one, I challenged Ben.  I've only played Ben 3 times, all of which were during a 40k lock-in, and all 3 were losses for me.  I needed revenge!

Ben brought a marine list with pedro.  We decided to run the NOVA format and rolled up:
Victory Points (250+ difference to win)
Table Quarters for the first tie-breaker
Objectives for the second tie-breaker
We also rolled dawn of war for deployment.  I win the roll, and give first turn to Ben.  I opt to hold everything off so I don't get shot off the board by his searchlights and shooting. 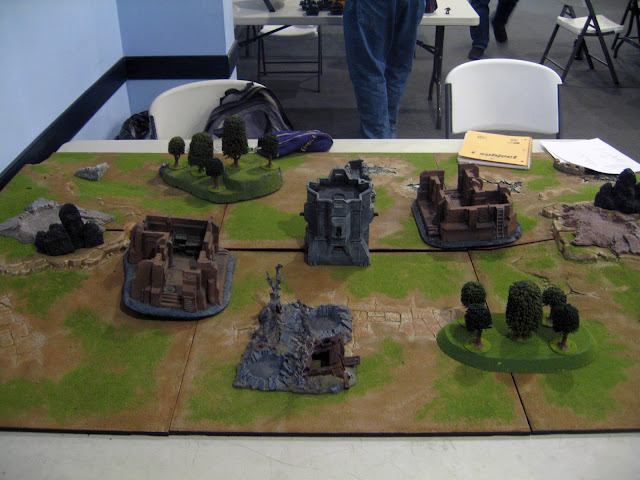 The pre-game:  My list is the same as my 2k list but without regen on the tyrant, poison on the genestealers, onslaught, and one venomthrope.  Ben's list... well, I'm glad there's not more sternguard.  However, 4 av13 vehicles and 10 vehicles total should prove challenging.  He also has one assault unit which is good for me if I get stuck in, or very bad for me if he keeps running and shooting.  I haven't played nearly enough games to know the vp values of his units, expecially if he combat squads, so my plan is just kill as much as I can and hope I end up ahead.

Ben deploys a combat squad with a lascannon in the his central bunker.  The empty las/plas razorback goes in the corner behind a wall.  He's reserving Pedro's combat squad in the other razorback as well as the sternguard and tac squad in the rhino.  Dreads, preds, and vindicator will come in on turn 1. 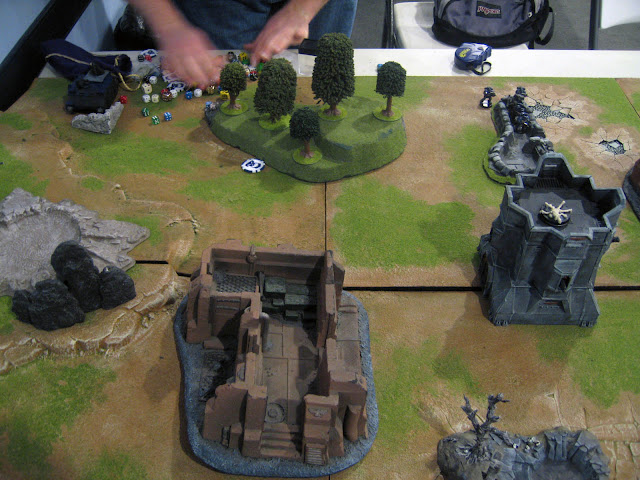 As planned, I hold everything off to remove one of his shooting phases and reduce my casualties.  Everything will come in on turn 1 except genestealers who will outflank.

Ben's turn 1...  He drops the ironclad on my left and it scatters towards my edge. 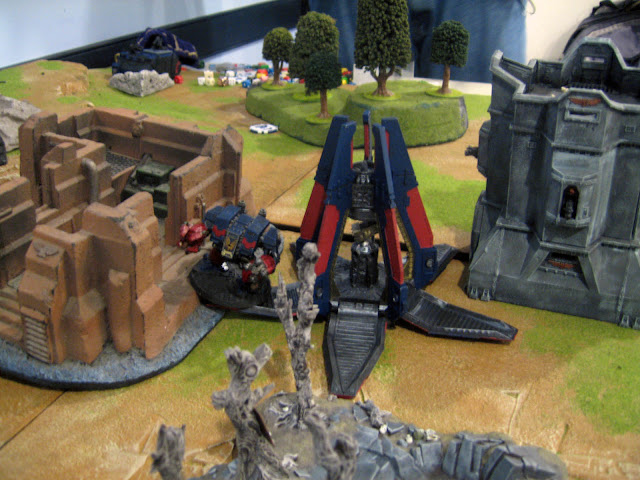 One predator and the vindicator roll up on the right side behind cover. 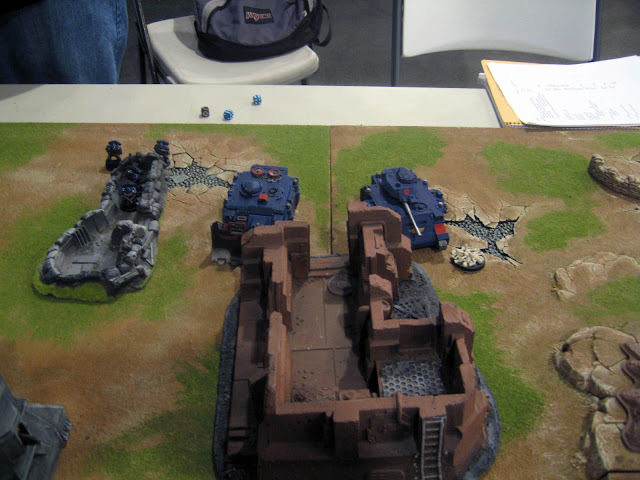 The rifleman and other predator roll up on the left side behind a forest.  The razorback that started on the table picks up a combat squad and rushed forward 12".  He smokes the razorback and ironclad. 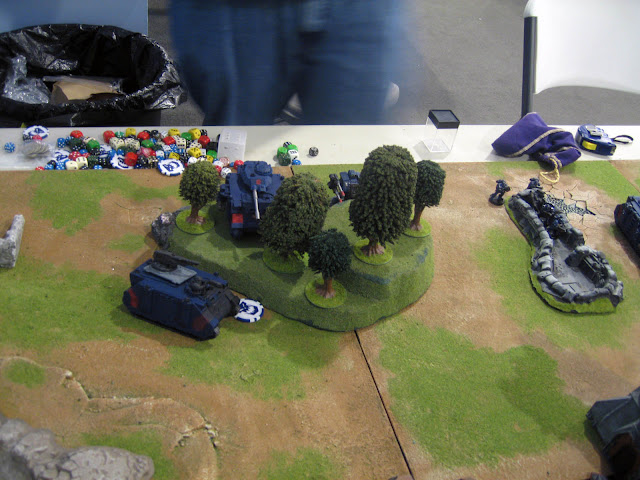 My turn 1...  I split my forces (I know, my first mistake).  On my left, a carnifex, tyrant unit, and other carnifex form the front line.  Behind them are the venomthrope, one tervigon, and both units of hive guard.  Gants try to come on into the blasted forest and I roll 1,1,2.  On my right, a tervigon and one unit of gants.  I did this to cause him to split his fire.  Between t6, FnP, cover, and his lack of low ap weapons, I think I can survive the run across the board. 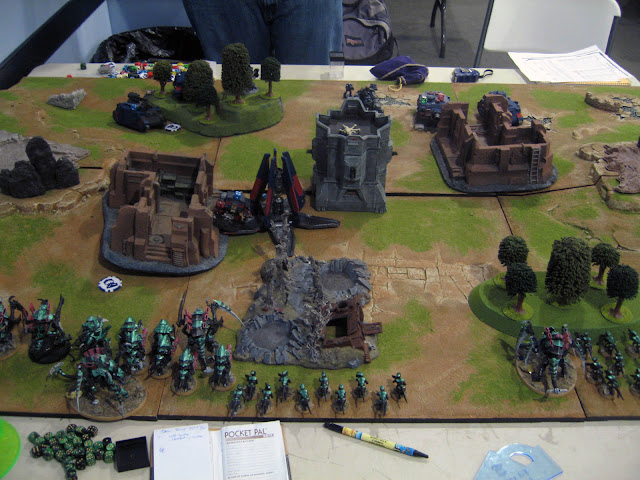 One carnifex and all hive guard fire at the ironclad and he makes every cover save from the smoke...

Ben's turn 2...  He gets his combat squad with the plasma cannon and rhino with full tac squad from reserves.  The razorback shifts to the left.  The vindicator moves up behind the central tower.  Vehicles move and rotate for better firing angles.  The ironclad gets a terrain roll that will keep it out of assault, so he opts to move it behind cover.  The dakka pred and rifleman dread put two wounds on the leftmost carnifex.  I also lose a gant from the middle. 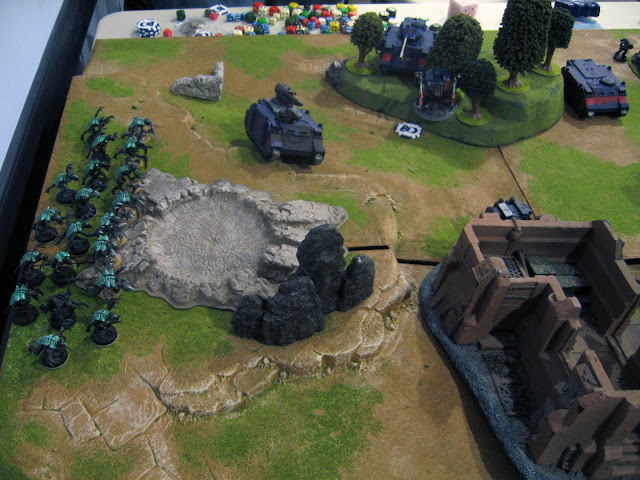 I want them to get the razorback if I fail to pop it open.  I also want a lot of them to be in cover in case I don't get a consolidation move.  My second big mistake here was not stringing them into catalyst range.  20 genestealers really need cover and FnP to survive the attention they receive.

Everything moves up.  I give FnP to the wounded carnifex and drop him back a bit to save his vp's.  The tervigon on the right also gives itself FnP and starts crossing the gap to the middle. 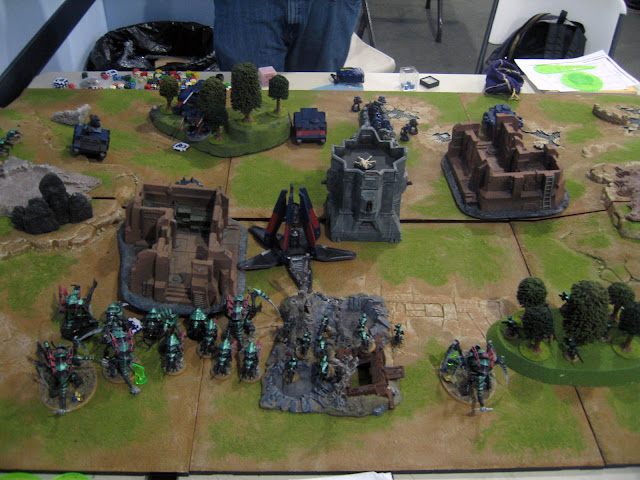 Hive guard can only shake the vindicator.  Venom cannons immobilize the razorback.  Genestealers assault the razorback, but I can't keep 10 in cover and stay true to assault moves.  They explode the razorback and I lose 5 genestealers...  All marines save their wounds, but the unit fails its pinning test.

Ben's turn 3...  Pedro arrives in the assault cannon razorback just in time to blow away some genestealers. 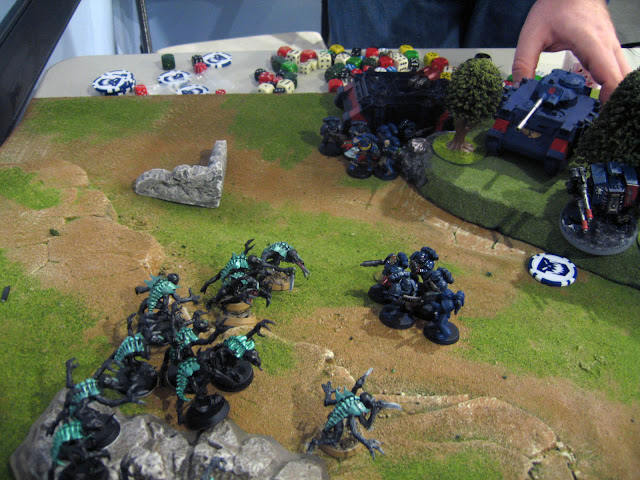 The dakka pred rotates towards stealers also and the ironclad waddles over and lights up his two heavy flamers.  Right about now I'm thinking I chose the wrong side to come in on...  His rhino races up near the drop pod and pops smoke. 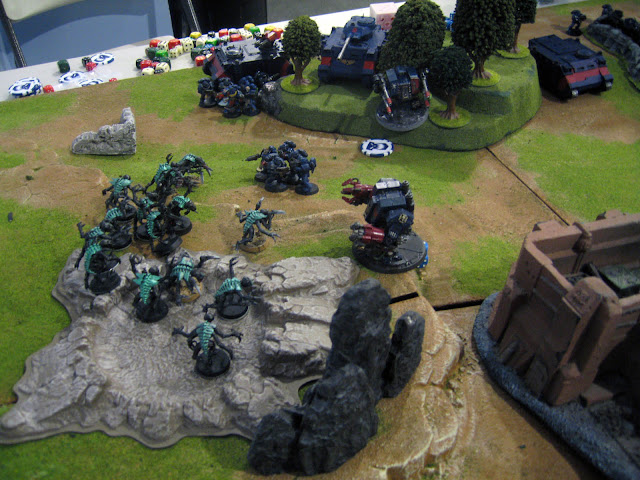 Most of his army opens up on genestealers and I lose a total of 11, almost all of which I could have used FnP against.  His plasma cannon in the middle also takes a wound off the middle tervigon and melts a gant.

My turn 3...  Well, my stealers definately won't "get their points back" this game, which actually matters this time due to the vp scoring.  Ahh well.  Everything moves up and I get a dismal terrain roll on the tyrant unit which slows down the rest of my army. 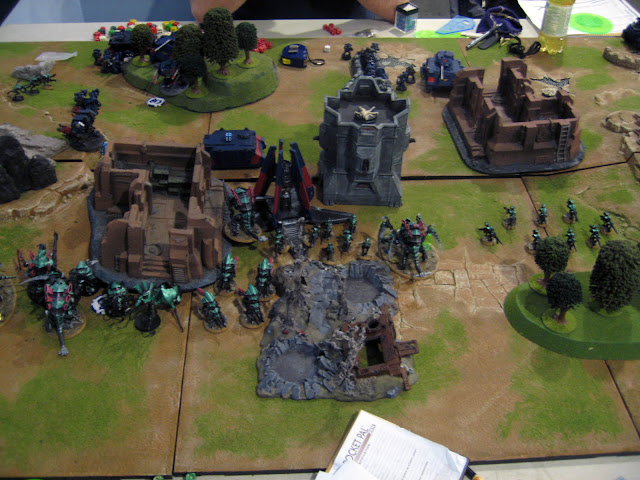 At this point, I have rear shots on the ironclad and wreck it with hive guard.  The other hive guard unit shakes the vindicator again.  The hive tyrant drops his venom cannon on pedro's unit and 3 marines go down.  The carnifex does the same thing and another marine goes down.  The unit passes morale (too bad they were 6" from the edge).  The central tervigon assaults the drop pod and explodes it taking out a couple gants.  The remaining 3 genestealers assault the pinned unit and each side loses 2 models.

Ben's turn 4...   The sternguard arrive to my rear.  The rhino moves up to where the drop pod was and roadblocks half my army. 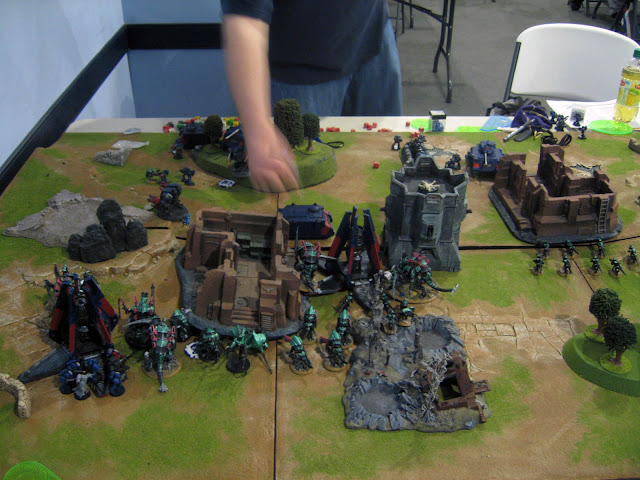 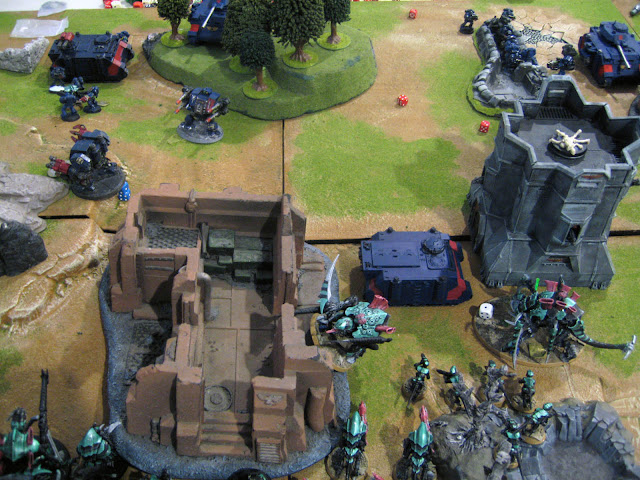 His sternguard open up with flamers and hellfire rounds and kill 1 tyrant guard.  Pedro calls down his barrage and does a wound to the tyrant.  One dakka pred kills 4 gants, the other puts a wound on tyrant guard.  The combat squad with the plasma cannon kill several more gants.  The lone marine from pedro's unit assaults the last genestealer who turns around and kills him, then gets dragged down by the original unit. 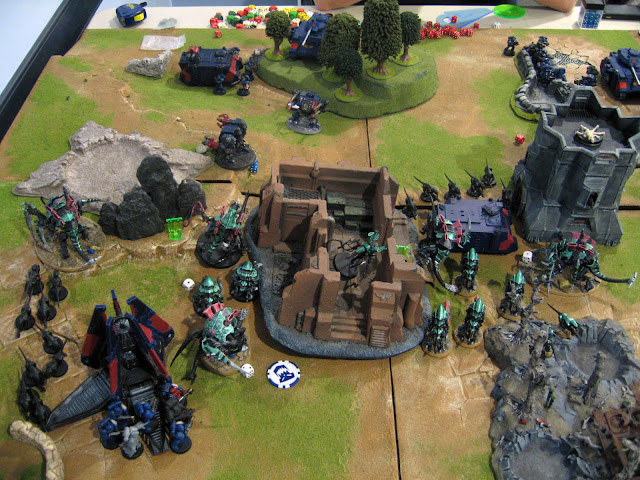 All of my shooting in the middle wiffs on the rhino...  The tyrant is able to shake the rifleman dread.  The left carnifex and spawned gants assault the sternguard and whipe them out.  Everything in the middle assaults the rhino and it explodes, killing 4 gants, 2 marines, and pinning them.

Ben's turn 5...  He backs up the vindicator which can fire for the first time. 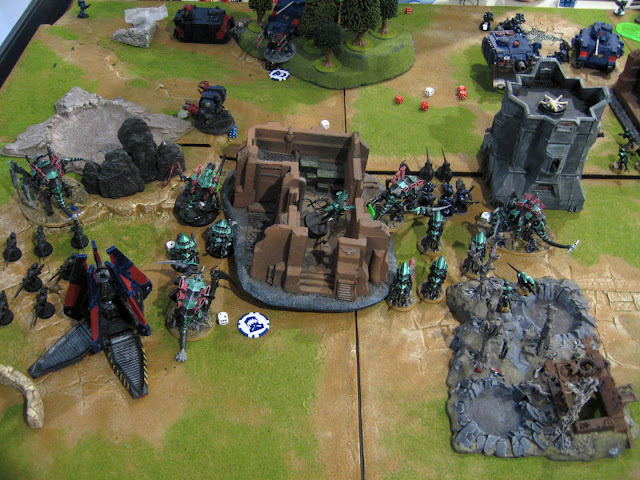 His assault cannon rends my left tervigon twice.  Marines kill one gant.  Vindicator lands it's blast on all 4 hive guard, but I make 2 saves and only lose 1. 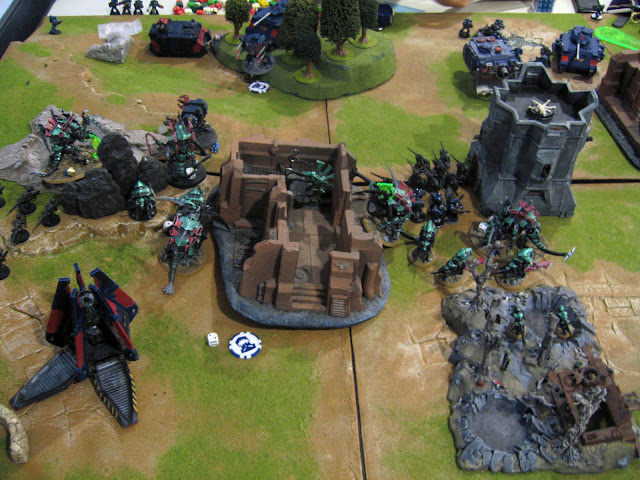 My hive guard explode the vindicator and take out 2 marines with the blast.  Gants gun down 1 more marine.  All 3 venom cannons wiff!  Tervigon and gants assault the marines in the middle.  In the end, I only kill 3, they kill 4 gants, I lose one more to no retreat and a wound off the tervigon. 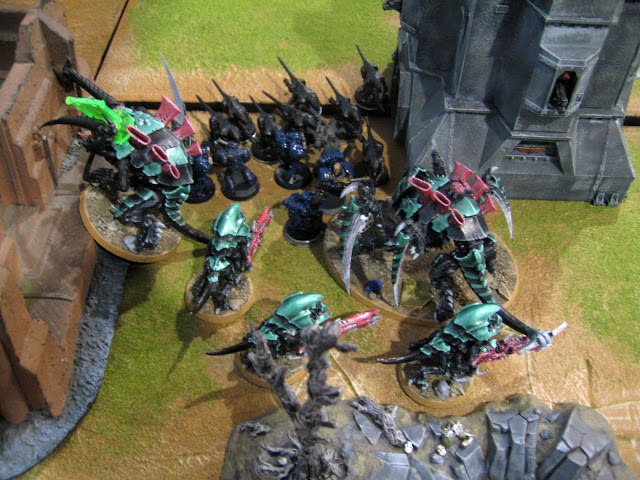 I can't believe I lost assault with 9 gants and a tervigon against a few marines with no fist...  Ah well, I think I'm ahead in VP's?  We roll and play on...

Ben's turn 6...  Another mistake rears it's head as pedro moves for my lead tervigon. 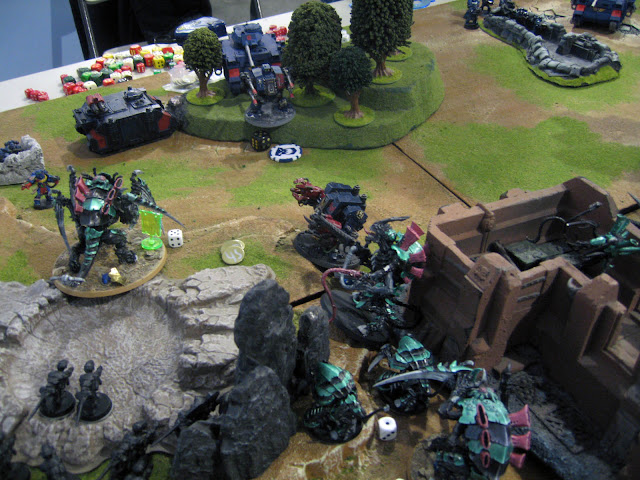 His plasma gun and combi-plasma marines jump out of a razorback and do 2 wounds to the tervigon as one melts himself with plasma.  Ben opens up with all his dakka and causes another wound to my tyrant, putting him at half strength.   Pedro assaults the tervigon and smashes it, taking most of the spawned gants with it.

My turn 6...  Well, it's pretty ugly and I have no idea how many vp's I've scored off marines.  I need a wound back on my tyrant to get half his vp back so I try leech essence on pedro and fail my psychic test!  Hive guard wreck the rifleman dread, carnifex wiffs on the right dakka pred. 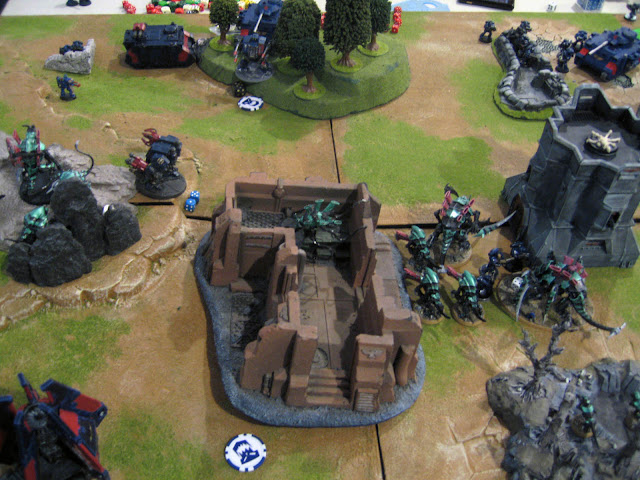 In assault, my tervigon wiffs on marines again!  We roll and the game ends...

So let's see.  We tally up vp's and ben has killed 1026pts of my bugs!  I had a lot left but my tyrant unit and tervigon were both at hald strength.  I actually realized I gave him full points for the painted gants you see in the pic above lower right, so it would have been 1001pts lol.  I've only killed 1024pts of marines!  This is due to so many combat squads surviving with a couple marines.  So we draw on vp's.  We look to table quarters and drats!  Ben has 2 to my 1...  Ben wins!

Post game:  Well I feel like I really let myself down here.  I could have and should have done several things differently as you probably picked up while reading.  The biggest one was not moving units towards the end.  I figured I was ahead on points so didn't pay attention to quarters.  All I needed was the two surviving gants that I forgot in my deployment zone to move 6" to the right into the other quarter to draw.  If the carnifex in the middle would have crossed the center line, I would have held 3 quarters and won.  I guess this is why I enjoy practicing as much as possible, so I don't make mistakes like that in a tournament.  Ben also forgot an attack bike so he technically beat me with less points hehe.  All-in-all, it was a great, close game.  I underestimated his list and the av13 proved resilient with the vindicator and ironclad taking most of my fire for 4 turns to destroy.  Ben's a great player too, and he held me to my half of the table very well.  I look forward to our next game!
at 5:06 PM