Posted by hyv3mynd
I'll be the first to admit that I've been slacking on my painting schedule for the escalation league, but it's hard to focus the week before your first child is born.  I was able to get out of the rut last weekend and get some work done.  Just to preface the pictures, here's a list of some of my goals with this army:

1.  Increase my paint score potential above my Grey Knight army with many more conversions.  Grotesques, beasts, and haemonculi will all be converted.

2.  Test the theory that more colorful armies draw more attention and possibly higher scores.  My Grey Knights are black and white, so the Dark Eldar will use bright colors.  The scheme was actually used when I played an army dubbed "Twilight's Edge" and is supposed to reflect the colors of a sunset fading into darkness.

3.  Save money on the build cost by converting plastic kits to avoid finecast when possible.  Finecast beasts run about $1 per point, so anything less than that will be good also.  Haemonculi and an Archon will also be converted.

4.  Cut down painting time by using new and more efficient techniques.  My Grey Knights were entirely hand-blended.  The Dark Eldar will be airbrushed, washed, and dry brushed.

With all that in mind, here are some progress pics from this week. 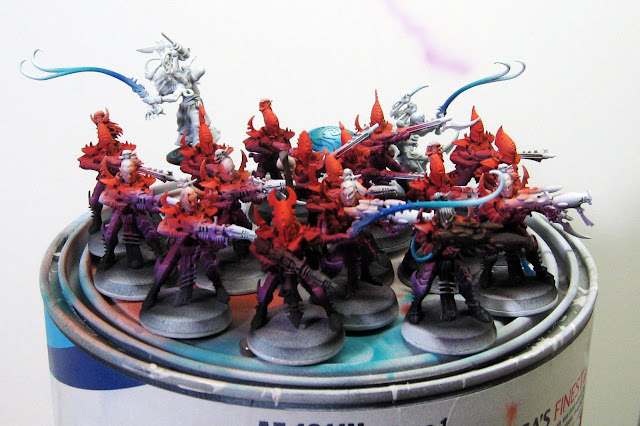 This is a batch of infantry that includes 10 warriors, 6 trueborn, 1 archon, and 2 haemi's.  To illustrate how fast air brushing is, I base coated these 19 models orange, red, purple, black, and shades of blue in 3 hours flat.  Finishing colors, washes, and dry brushing on my test model took 2 more hours, bringing the time investment to about 2.5 hours per model.  Compare that to 6+ hours per Grey Knight! 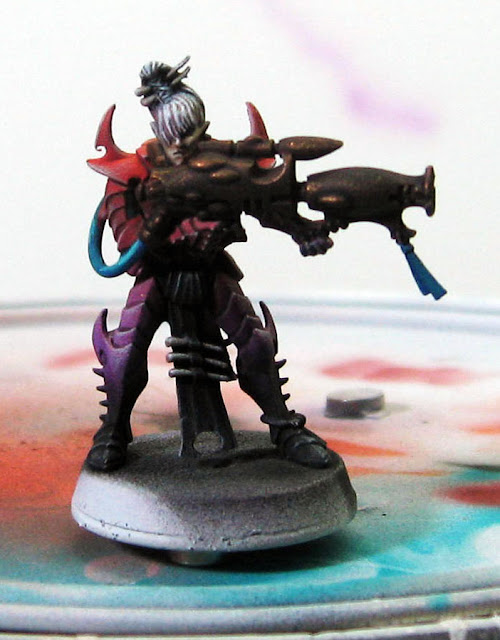 This is a trueborn with a blaster I finished as a test model.  I ran into an issue with my build as it needs 11 blasters but each infantry box only comes with one.  This blaster is a dark lance with the barrel cut off.  It's simple, looks decent, and saves money.  I was able to make 10 warriors (2 blasters), 6 trueborn with blasters, and an archon with a blaster using just 2 warrior boxes and extra bitz from the scourge box. 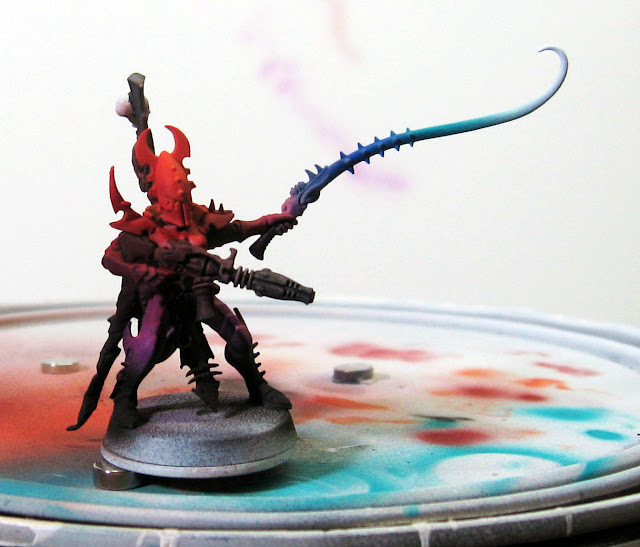 Here's the Archon in progress.  At this point, I've airbrushed the armor and agonizer.  The undersides of his arms, legs, and blaster have been washed black.  This guy's blaster is actually a shredder with the tip from a blast pistol.  He probably needs an hour to finish with some brown and gold on the gun, black lining the upper armor plates, and dry brushing grey. 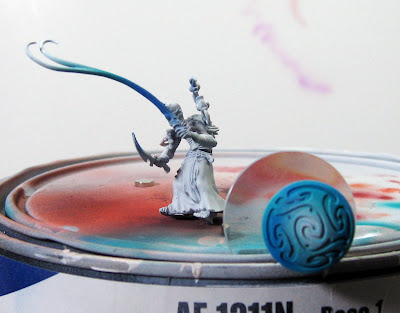 Here's a haemonculi whose agonizer and hover board I've airbrushed.  His hunched form makes it hard to airbrush, so his body will be hand painted.  I finished up the hover board with brown and gold on the high points and left the recesses blue in hopes it would look like an internal glow. 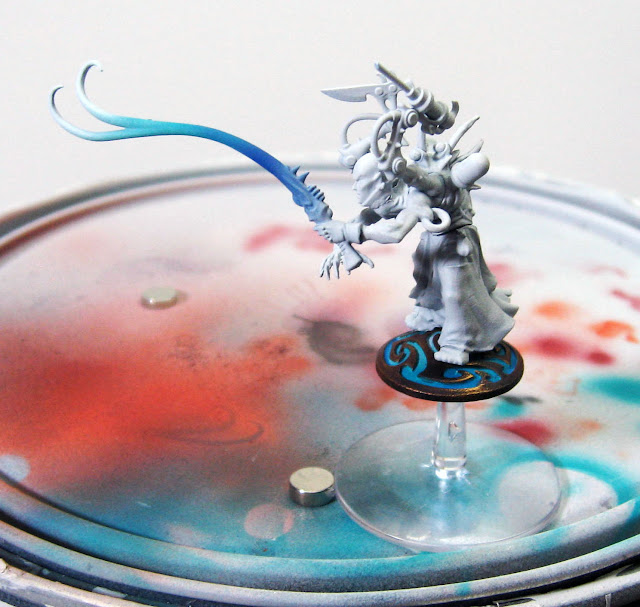 So I was able to do all the painting pictured above in two sessions on one day.  I'm pretty happy with the results and it gives me hope that I can finish the army in the 2 months I have left until the painting tournament.
at 9:10 PM