Posted by hyv3mynd
After a solid win in round #1, I was interested to see who my next opponent would be.  Most of our regular heavy-hitters were absent from this event and there were several news faces to me.  I ended up against someone new who drove in from Buffalo or Erie, I can't remember.  His list was a "Rock" list, which typically don't frighten me, but he's got 2 land raiders which can be tough for Nids.

The game was cap'n'control with spearhead deployment.  I won the roll and decide to go first.    I placed my objective WAY in my back corner, behind a bastion and about 2" from the two table edges.  I always feel lame doing this, but a week before ATC, I wanted to bring my A game and get some solid wins.

I deploy my troop tervigon on my objective and behind the bastion for cover.  Gaunts went up front and in cover with the tyrant guard behind them for cover and my tyrant right on my front line.  One unit of hive guard went on each side with the other tervigon and tfex behind a ruin for cover.  It wasn't the most aggressive deployment, but my opponent has 9 lascannons and I'm hugging cover in case he seizes. 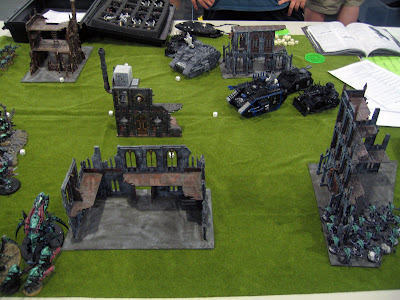 My opponent deploys both land raiders up front.  Kharn and Lucius are riding with the berzerkers in the unpainted one.  Predators and rhinos go behind each raider.  I infiltrate one unit of genestealers in each empty quarter and in cover.  My opponent has almost no anti-infantry shooting so I'm not worried about FnP or spacing.  The unit on the left flank are placed much further than 18" to assure I don't eat a first turn assault from Kharn. 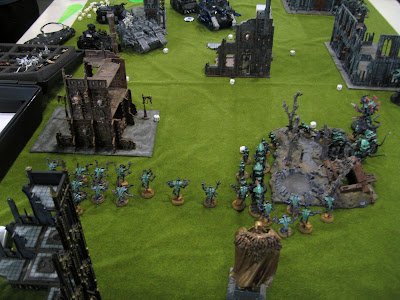 My opponent deploys both land raiders up front.  Kharn and Lucius are riding with the berzerkers in the unpainted one.  Predators and rhinos go behind each raider.

My troop tervigon spawns 11 gaunts (no dubs) on my objective and moves up.  Everything else except the genestealers on the left move up and runs.  In shooting, the tfex explodes the right predator. 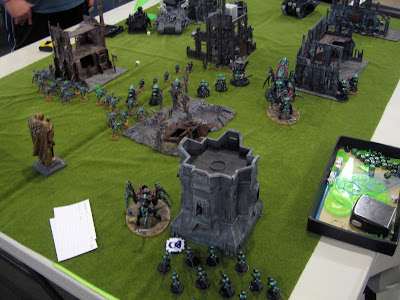 My opponent pulls back the black raider to block the genestealers in the ruins.  He doesn't get them out so I don't think he liked the odds; 5 dual claw terminators vs 19 genestealers.  His lascannons kill a tyrant guard and one hive guard.

I move everything up again and build a wall of gaunts and genestealers on the left side to prevent kharn's raider from unloading in my middle.  Genestealers on the right move up but only a few inches.  I know he can't shoot them down, so I'm holding them back a couple turns longer in hopes I can keep some alive to contest his objective.  I'm able to shake the left predator with shooting. 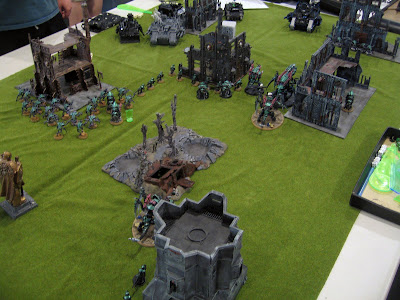 My opponent opts to stand and shoot, which puts him in a bad position.  My objective is over 48" from his land raiders now.  He needs several turns of max movement and a lucky assault to take my objective away.  I'm suppressing one vehicle per turn and each one has multiple lascannons.  Not nearly enough firepower to kill my tyrant let alone the two tervigons that will win objective games.  He brings up one rhino and zooms up the shaken predator to block the center.  In shooting, he puts a wound on the tyrant. 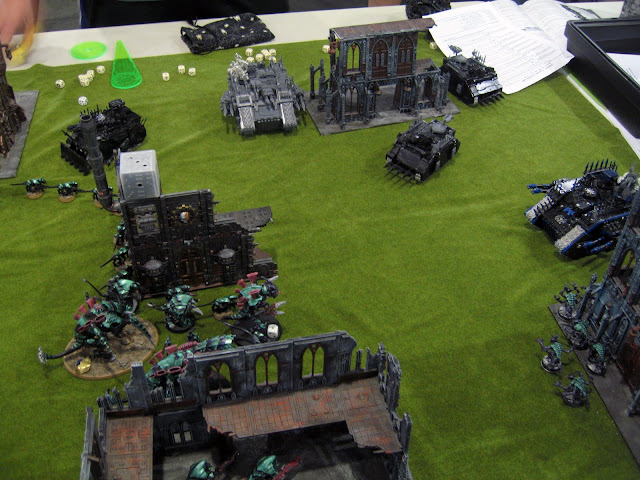 I decide to push my left flank at this point.  he hasn't committed either land raider to taking my objective yet so I can afford to play more aggressively.  I decide not to assault the predator that moved 12" and preserve my screen of bodies. 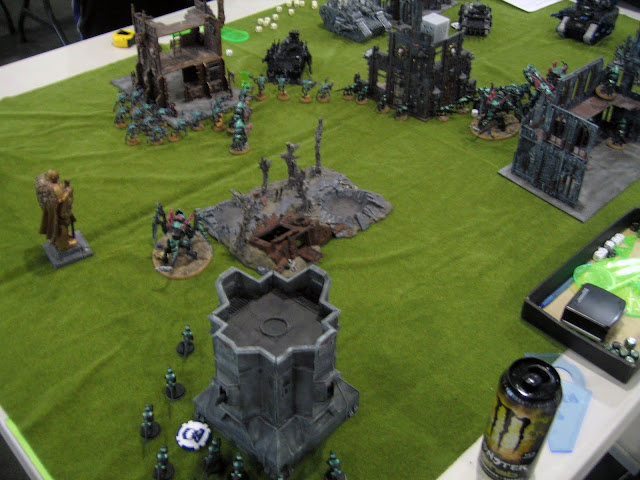 My opponent stands and shoots again.  I'm beginning to think it's possible he's just playing for the draw and is going to just try and wipe out my advance.  His lascannons put two more wounds into the tyrant unit. 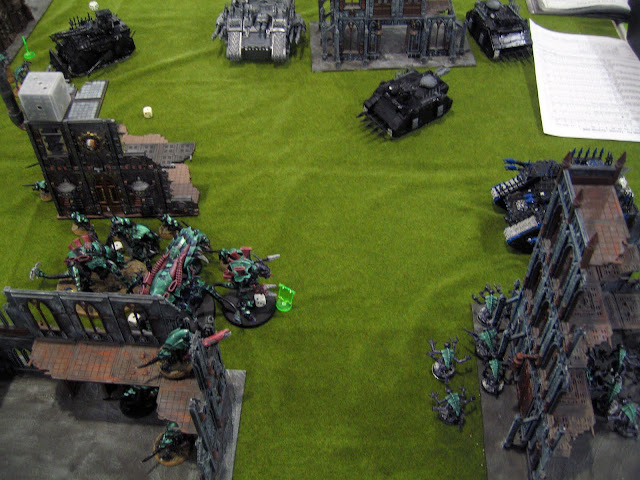 I see my opportunity as the rhino on his objective has now been stationary.  I send the genestealers on the right flank up. 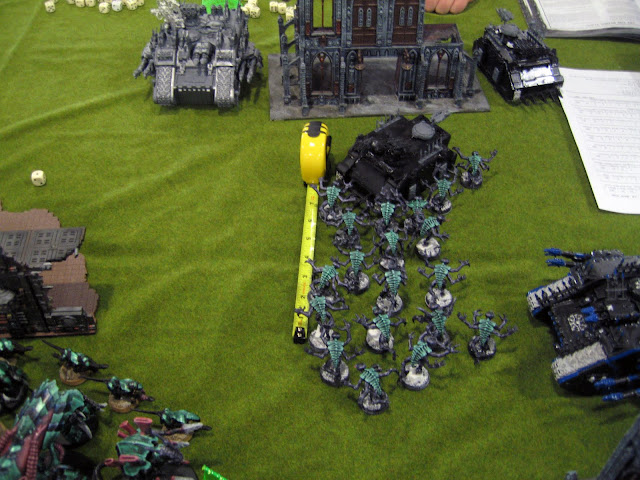 In shooting, I explode the second predator.  Genestealers assault the rhino and immobilize it.

My opponent springs into action and tank shocks with both land raiders. 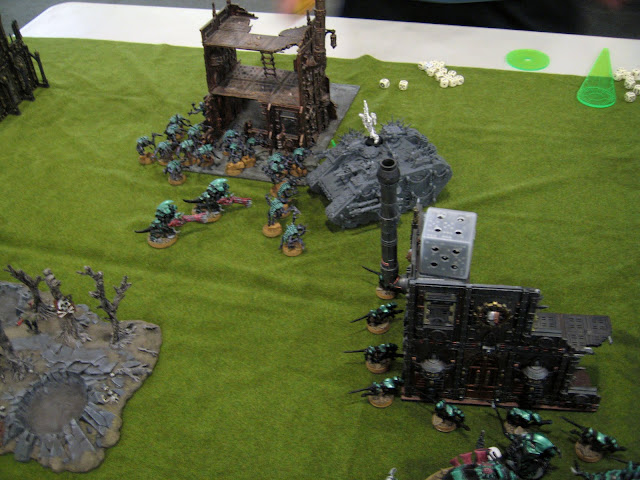 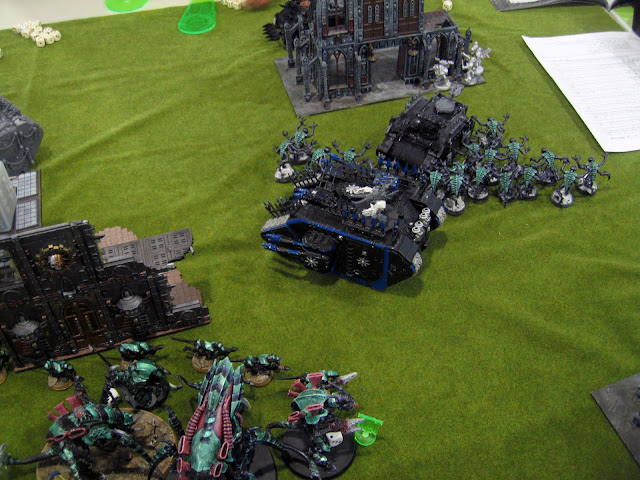 He decides to leave both units inside...  Only plague marines can shoot and he kills a couple genestealers.

It's the top of turn 4 and I decide to send everything I can onto his objective to contest. 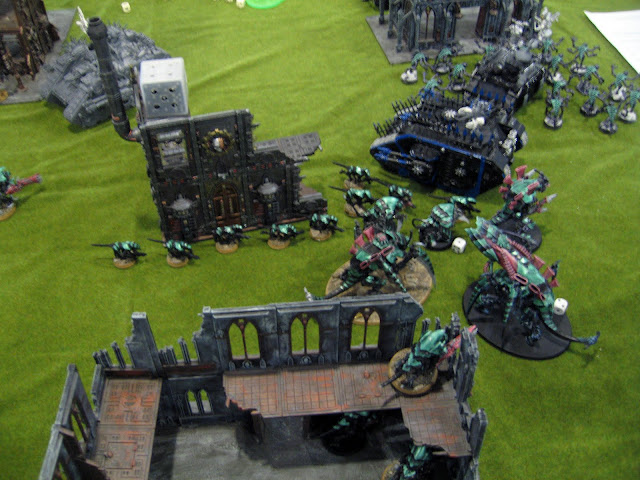 On the left, I spawn another big unit of gaunts (no dubs) and create another barrier to intercept kharn's unit.  Genestealers pull back and continue to block the land raider.  My goal is to be able to take a 12" tank shock and end up 1" from his exit points so he can't get out. 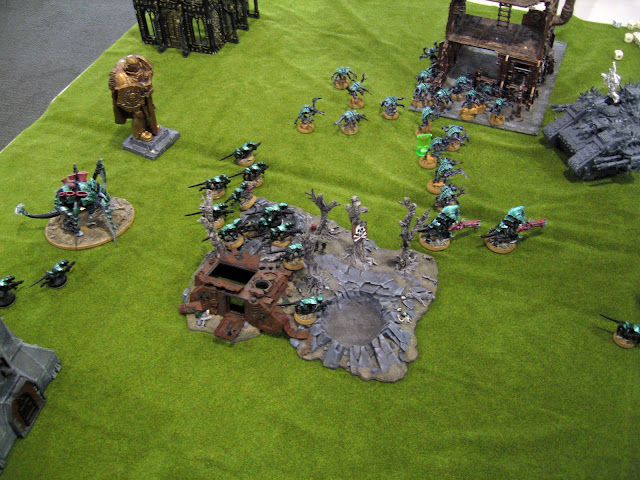 Shooting doesn't do much.  In assaults, my tyrant fails to hit the land raider and my genestealers fail to rend the plague marines and we lock. 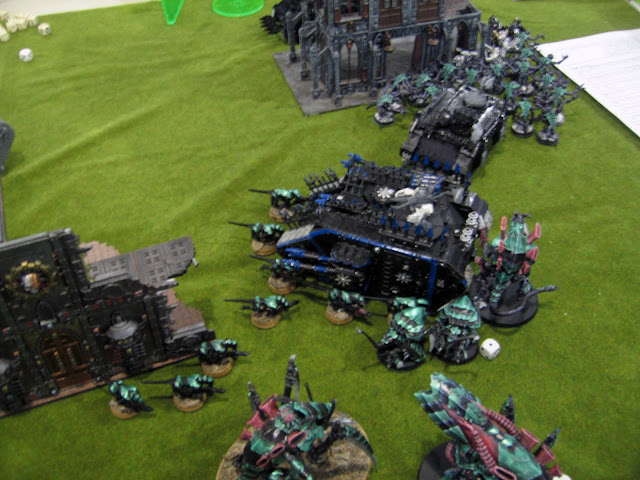 My opponent brings up his last rhino and smokes it.  Terminators get out and go for the genestealers.  Kharn's ride tank shocks another 12" towards my objective. 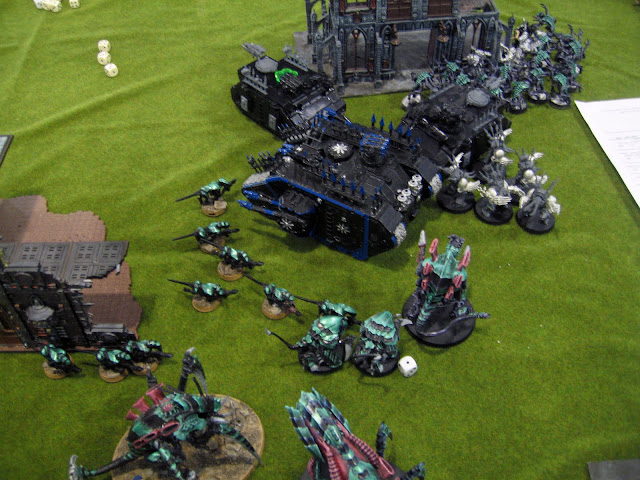 My genestealers get murdered by the terminators, but enough survive to lock.

I still need to stop kharn's land raider in case the game goes to 7 turns.  I wrap it in genestealers again and spawn another unit of gaunts to take a charge.  I now have 3 big units of gaunts, a scoring tervigon, and genestealers between him and my objective. 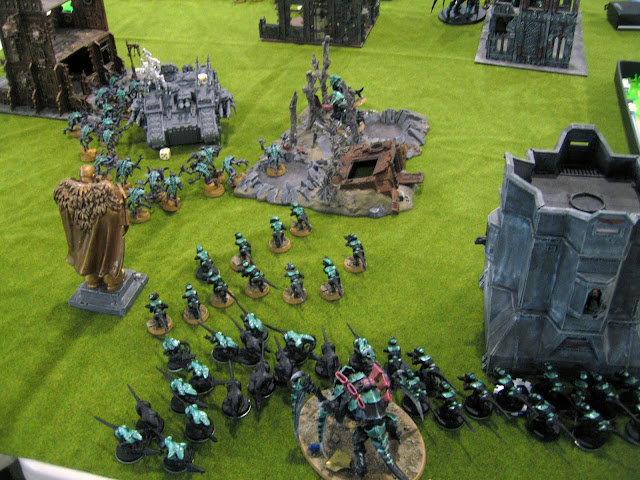 In his deployment zone, my hq tervigon spawns a unit of gaunts and runs in.  My tyrant head in to save the genestealers. 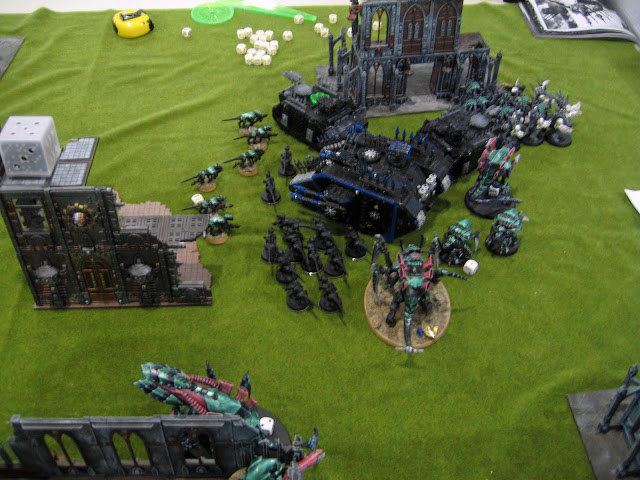 My tfex succeeds at immobilizing kharn's ride.  Hive guard explode the immobile rhino and kill several genestealers.  My tyrant assaults the terminators.  Each side inflicts casualties, but we lock.  This is very bad for me because none of my units are within 3" of his objective to contest as his vehicles have blocked me.

He doesn't have much left to do as his land raider is immobilized and he doesn't think he can chew through all my units to get to my objective. 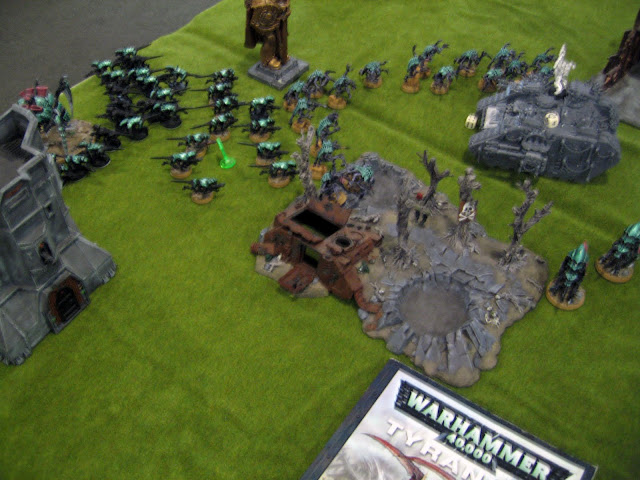 In assault, I am unable to kill his last terminator! 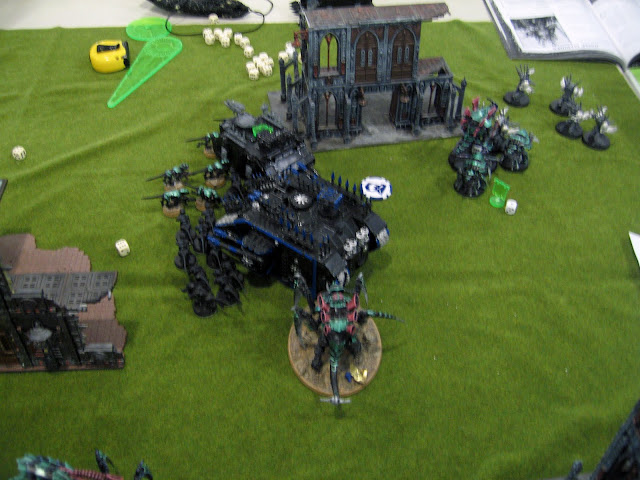 We roll for the end and the game goes on!  At this point, my opponent concedes.  I have 4 units capable of contesting his objective and he cannot make it to mine.  I end up winning 1-0 objectives.

It was another pretty textbook game for me.  My opponent didn't have any shooting to threaten my genestealers so I could play them without fear.  His assault units were pretty strong and he could have done some serious damage if he would have committed them early and caught me in a multi-assault, but moving the land raiders decreases what shooting he does have.  This is why putting assault units in shooty transports generally doesn't work out.  I could have had a draw since my tyrant wiffed and couldn't consolidate onto his objective turn #5, but luck was with me.  I went into the 3rd round on table #1... stay tuned!
at 1:42 PM