Posted by Calypso2ts
Following the huge painting push I went through before Da Boyz back in November I have had a bit of trouble getting back into painting.  Other life stressors contributed as well - is it me or are the holidays terrible for Warhammer?!  The important part is that I had a few days where I was able to sit down for a few hours and do some painting and modeling.  The painting aspect was the most therapeutic  but this also represents my first real foray into kit bashing.  Below is the Sorcerer I will be using as an allied HQ - and maybe in a CSM army at some point. 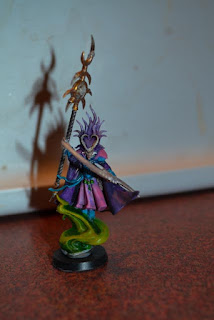 I wanted to keep the models consistent with my Daemons colors - since I already spent so much time discussing CSM allies for Daemons - which means Purple, Pink, Teal and Green are the primary colors with fleshy tones for the skins.
I have to give credit to a coworker who took these pictures on his new camera - they are much better quality than I can usually get and they were even taken with indoor lighting at night!

The Sorcerer is a kitbash of the High Elf Wizard model using Daemonette piecs and the head from the Seekers package.  I modeled her with a Force Stave - I like the S 6 weapon in the Sorcerer in general.  The kit also came with a rider who I am working to put onto a Bike I acquired with some tournament winnings. 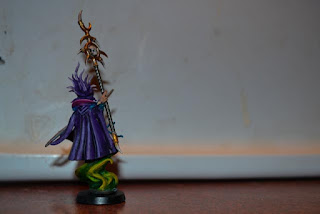 The basing is not completely done - although the swirl of magic the model comes with does a nice initial job. She will eventually get a nice hardwood stage floor like the rest of the army has.  More on that in a later painting and modeling post, but it involves some wood glue, a dremmel with a sanding wheel and a lot of birch drink stirrrers!

In addition to the Sorcerer, last week I painted my first CSM from the Dark Vengeance set.  I love those  models and it seemed like the perfect one to get me inspired again to do some painting. 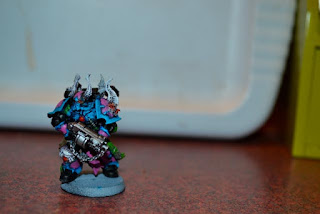 This guy started with a gray primer - I like to use grey for brighter colors even if it is a bit difficult to get good coverage.  It was also important to me for the extrusions in the armor to feel very skeletal for the model - I thought doing a fleshy color here would be too much of a contrast with the pinks. 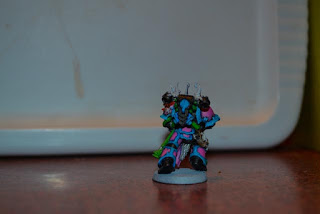 This is actually the second Space Marine of any sort I have ever painted - the first being a Vulkan that I just liked the model for.  The non-bolter DV models need a little work before I use them, removing double lighting claws for example to make them a bit more like the squad commanders I want.  By the way, my preferred champion loadout is combi-weapon, lighting claw.

Taken together here is how the models will look: 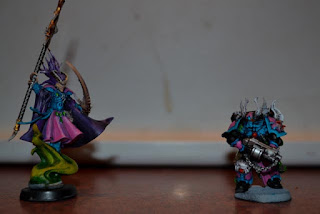 The upcoming team tournament at Millenium does not support allies - which is a shame because it would be good motivation to finish up a CSM force.  I think these guys will really pop on the table!  So that means I am back to Daemon painting until the rumored codex drop next month.  A quick rundown of the 1000 point list I plan to bring for those interested

This is a brutal list in my opinion, but it also hits sacred numbers and minimizes repeats of the especially obnoxious Screamers/Flamers.  I might split the Screamers into two units of 6 and instead take more troops but for now this works well with what I have painted.  I need to finish the base work on 3x more flamers and then a lot of details on just about all the models, but they are table top quality right now.

I would love to pair this with a CSM player - their Warlord traits can make a Daemon ally absolutely brutal. Infiltrating their entire army nearby for shooting support is a great option with Huron, or providing a hatred Space Marines to the CC units is good too.  If I do end up with CSM, I will probably drop the Grinders and  add in a huge unit of Blood Crushers to take advantage.  I just wish I had 2 more crushers to make them Khorne Sacred of 8.

In the spirit of adding a bit of cuteness to posts, here is a picture of my own bio-titan (Violette) from last week. 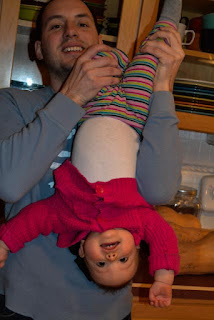