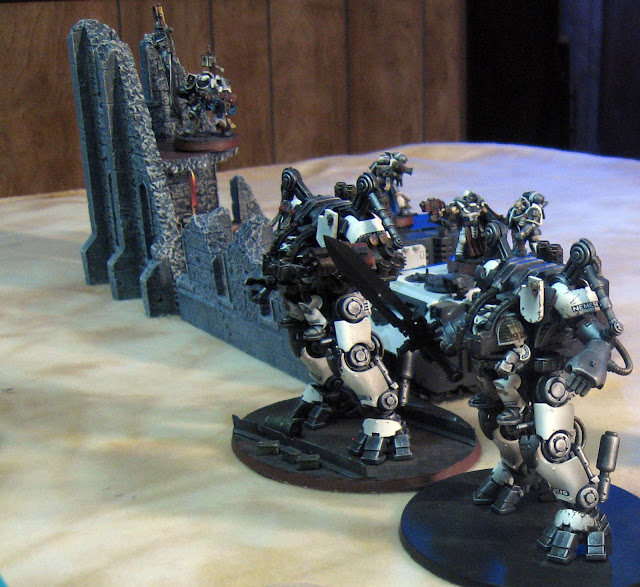 I've been able to start sneaking in more games recently.  Work's been keeping me out of the monthly tournaments so I haven't been working on any tournament builds, just fun stuff I've been wanting to try.  This week, Chris from Buffalo (sinistermind) accepted my challenge and brought out a Typhus list.  This was also exciting for me since I'm working on a Typhus list of my own.

We rolled up The Emperor's Will with Hammer/Anvil deployment.  We set up using terrain density and alternating placement. 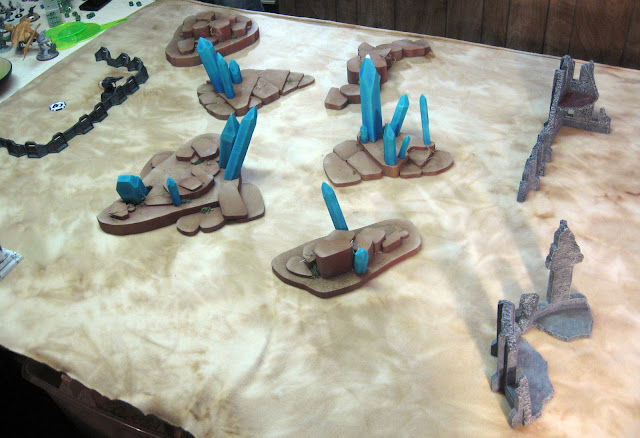 Chris sets up his ADL on the left, I grab ruins to shield me from the oblits, and fill the middle with zombie speedbumps.  I've got tons more mobility, but his oblits and colossus outrange me.  There's no night fight turn 1.  Chris wins the roll but makes me go first. 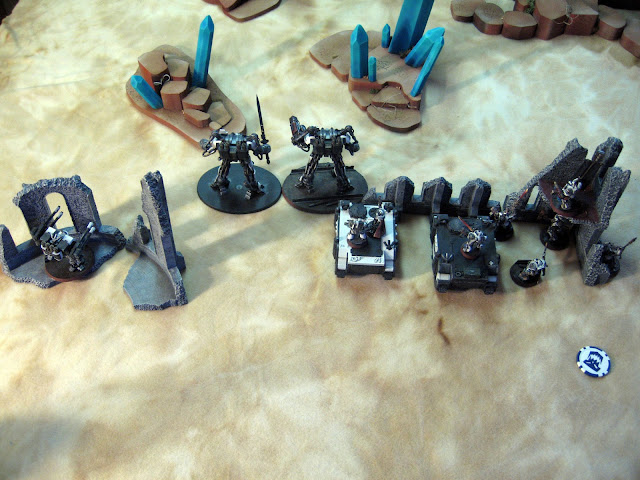 I use the grand strategy to make the purifiers and strike squad reroll 1's to wound.  NDK's are up front to jump up and support Mordrak's drop.  The inquisitor joins the purifiers in the unpainted rhino.  Strikes and terminators are closest to my objective. 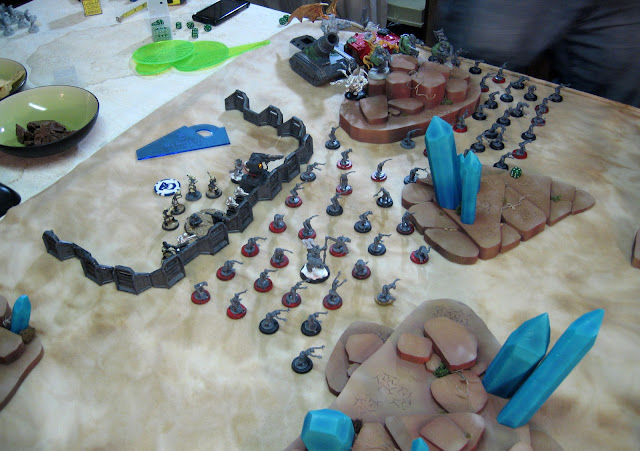 Chris puts the guard on his objective with the inquisitor on the icarus.  Typhus and zombies will be pushing forward.  Oblits and spawn are on the top hill with colossus, daemon prince, and plague rhino behind.  His strengths are heavily weighted to the top side, which I now must avoid due to my reliance on 2+ saves and his abundant plasma. 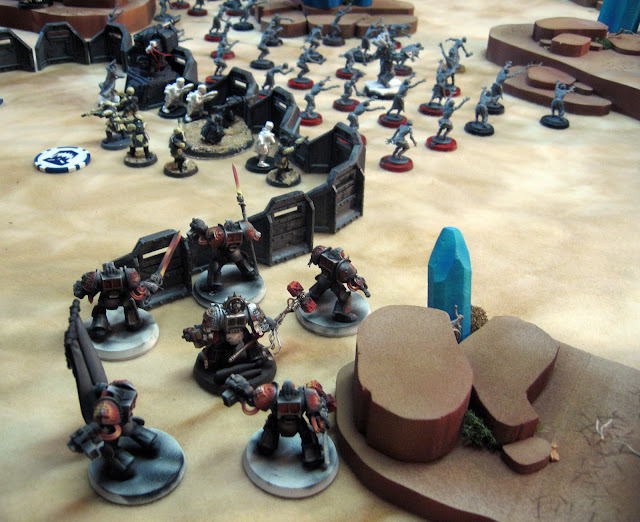 The game begins with Mordrak arriving with his ghost knights and running, putting the ADL between them and all the plasma. 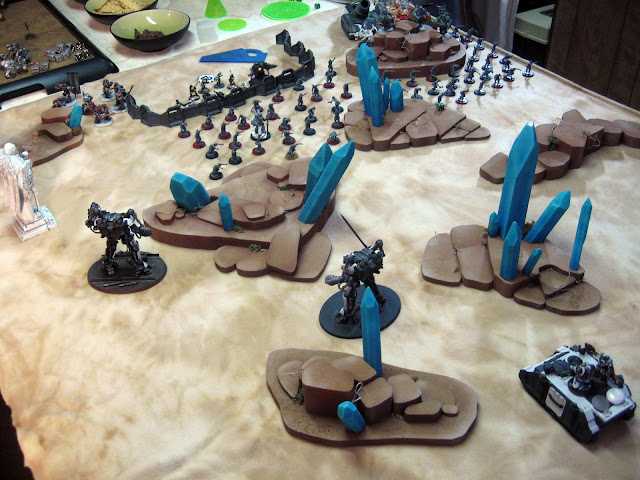 The NDK with the incinerator shunts up.  The sword NDK jumps and runs.  Purifiers follow behind.  The incinerator burns down 3 guard vets and their missile team, but they stay on the table.  The rifleman strips a wound from the icarus. 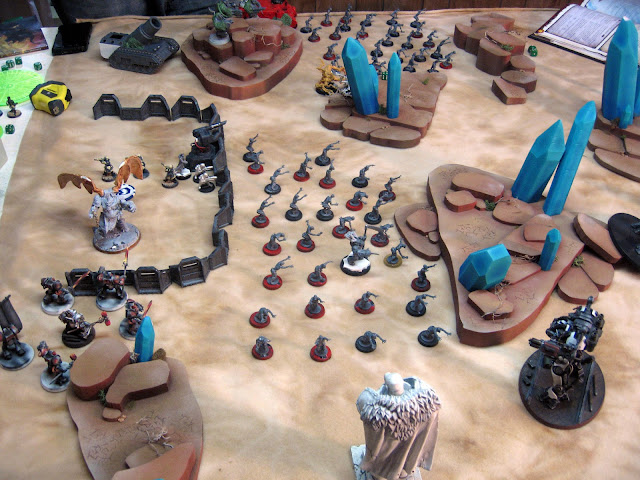 The daemon prince attempts to use gift of contagion, but fails his test.  He swoops towards the ghost knights.  Typhus's unit shuffles between the ghosts and NDK.  The far zombies and spawn advance.  My forces are safe from the colossus for now.  The oblits strip the stormbolter off the purifier rhino.  Plasma vets kill 1 ghost knight.  Tyhus kills another with plague wind.  His zombies fail their assault move. 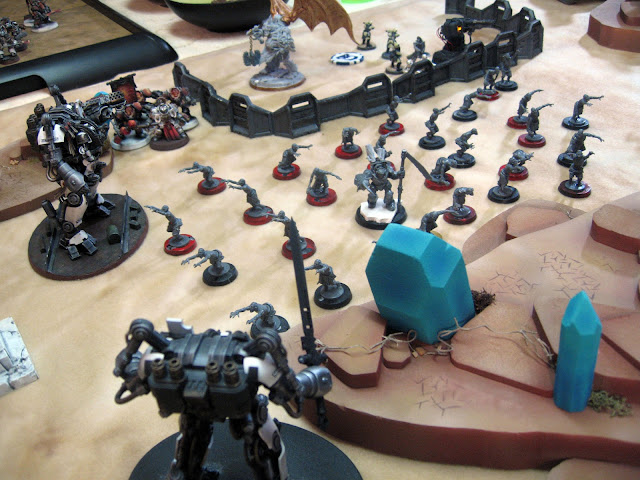 Well, I expected to lose more ghosts but my saves were hot so I make my move.  The inquisitor puts prescience on his purifiers and the psycannons knock over a few zombies. 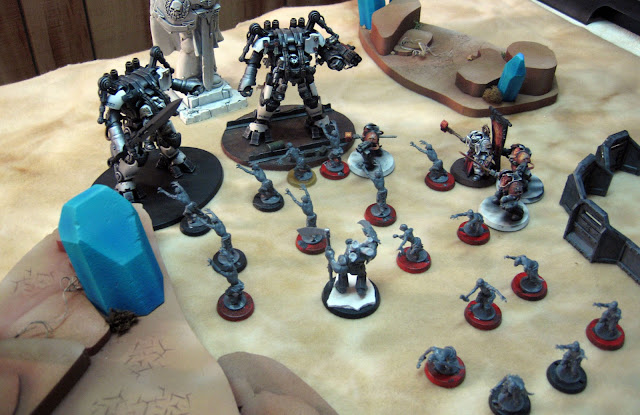 The ghosts and NDK's all assault Typhus's unit.  I challenge with the incinerator NDK (since he's the only str10 at i4), Chris accepts with the zombie champ and gets smooshed.  I smash a ton of zombies.  Typhus piles in at i1, gets 5 extra attacks with manreaper, activates force and kills Mordrak (4+ LoS!) who takes his ghosts with him when he falls (also first blood).  My sword NDK can't get back into combat with his 3" so breaks free. 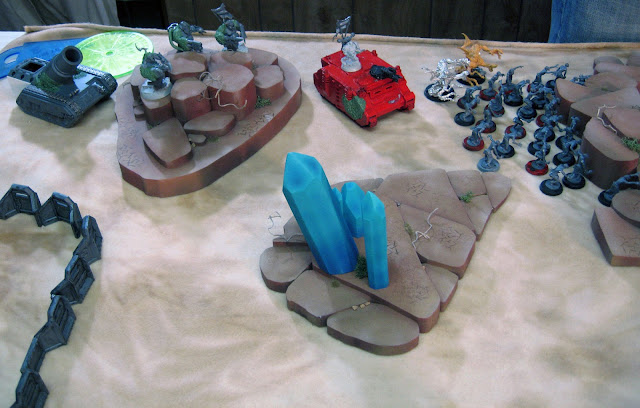 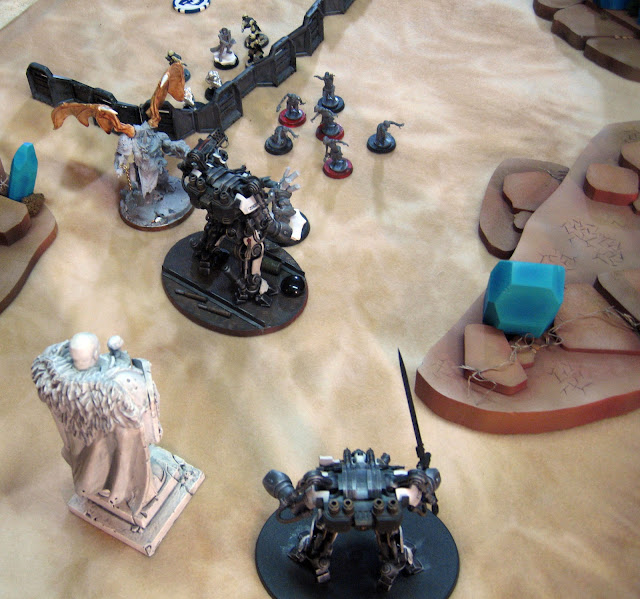 The daemon prince glides down to assault.  The incinerator NDK gets gift of contagion for -1str/t.  The sword NDK denies the second gift and takes 2 wounds from shooting. 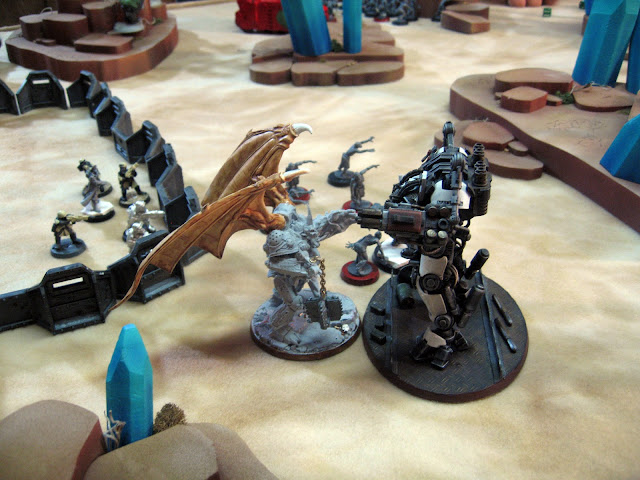 The daemon prince assaults in at init8 and challenges.  The black mace goes off and he causes 6 wounds after hatred and fleshbane. 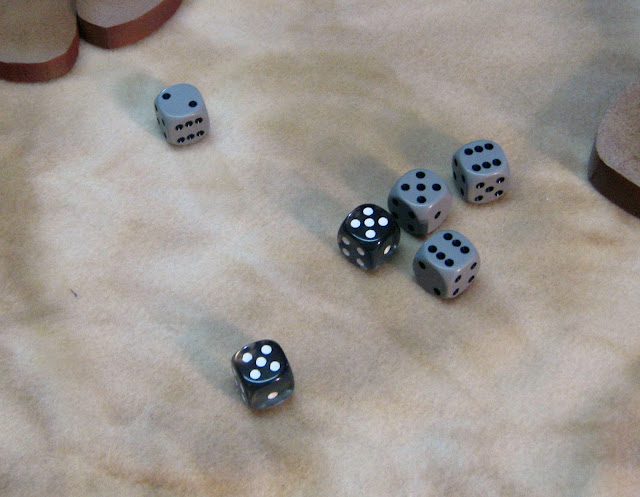 Amazingly, I make 5 of the 6 invulns and pass my toughness check!  The NDK then 1 shots his prince, but is still locked with Typhus and a few zombies. 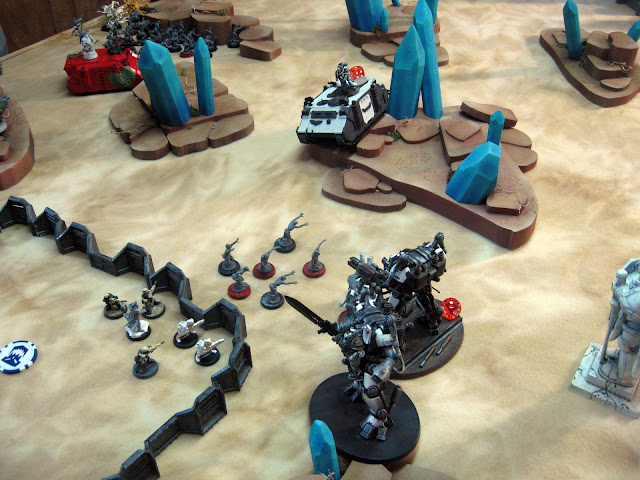 The purifiers and sword NDK push up again. 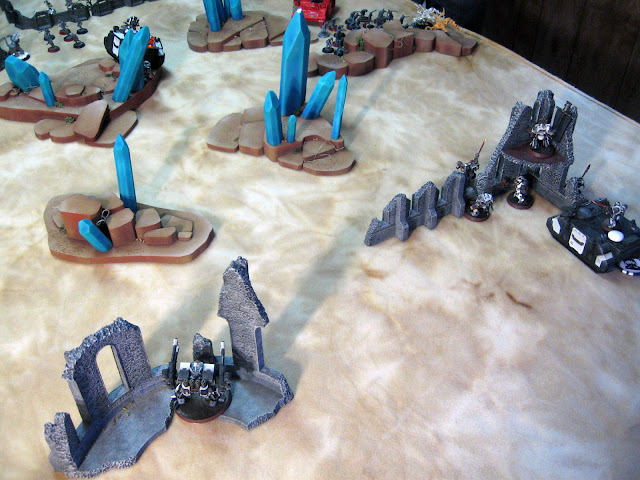 Terminators and strikes are just hanging back as my only 2 scoring units.  Shooting takes down the icarus and the purifiers explode the plague marine rhino.  The sword NDK mops up the guardsmen.  The dice prove fickle again in assault as Typhus challenges the incinerator NDK.  I hit once and fail to wound.  Typhus activates force, kills the NDK, and mutates into a daemon prince.  Yup, it happened. 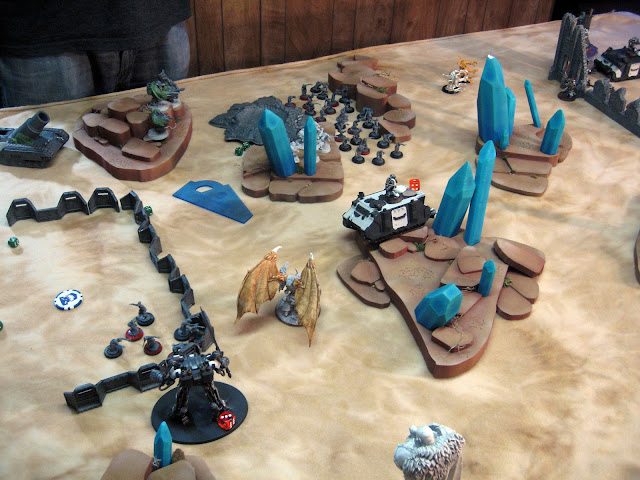 Typhus-prince leaves the zombies who head back to his objective.  The last NDK goes down to shooting, but the purifier's rhino survives losing a second hull point. 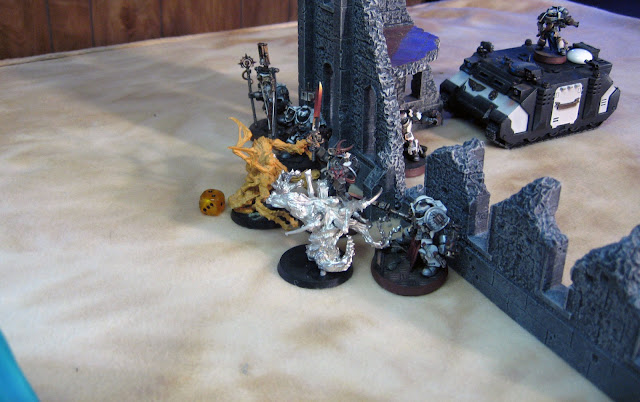 Spawn assault my terminators.  My str4 guys fail to wound and my hammer misses 3 times.  I lose 1 terminator. 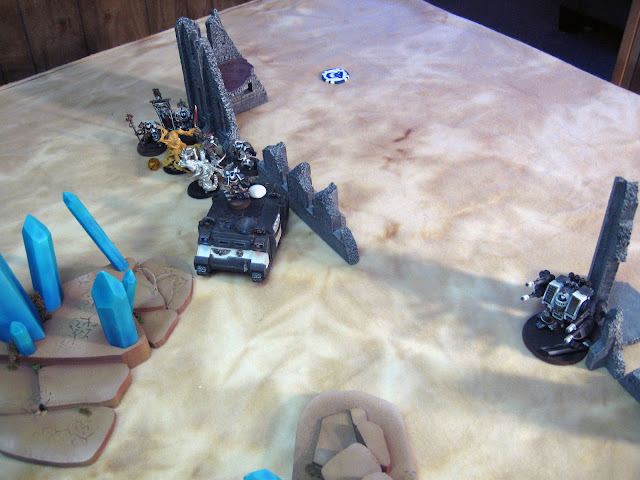 The end is approaching and I think I can handle the spawn so the strike rhino rushes up passing terrain. 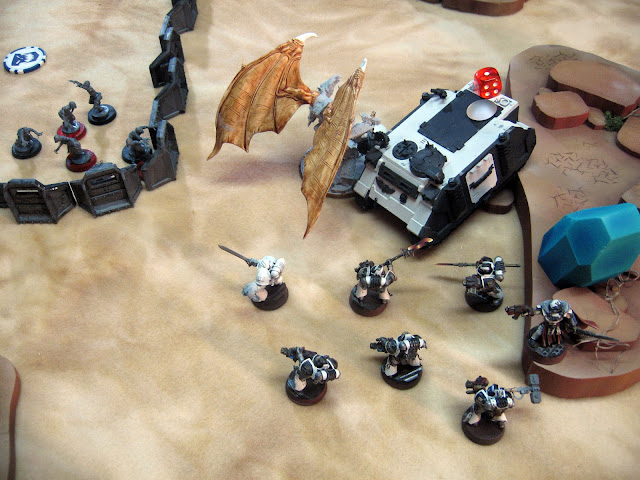 The purifier rhino pulls up and they jump out.  Combined fire drops the last zombies by his objective while the rhino flat-outs to shield the purifiers.  Terminators instagib the spawn. 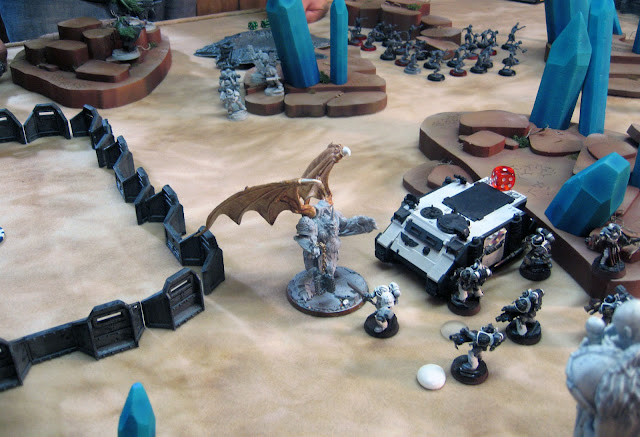 Typhus-prince goes after the purifiers.  A colossus shell splatters 2 purifiers.  The prince assaults in, my psykotroke grenades make him init1, the halberd wounds thanks to the rad grenades, and I successfully activate force to slay the prince (warlord). 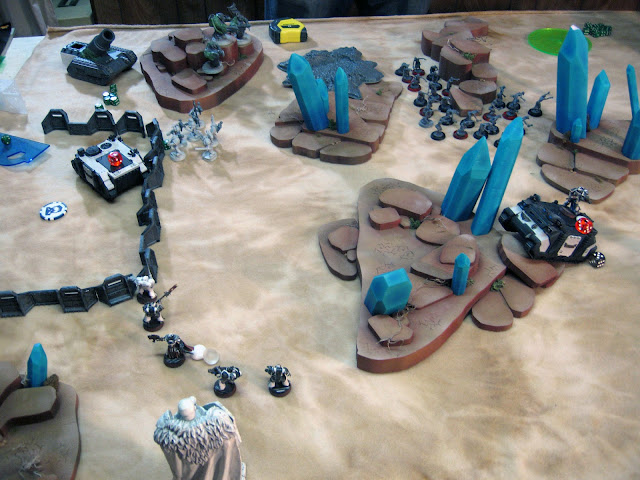 The empty rhino moves to cut off the plague marines.  Strikes continue at cruising speed + flat-out to rush across the field.  Combined shooting only takes down 1 plague marine. 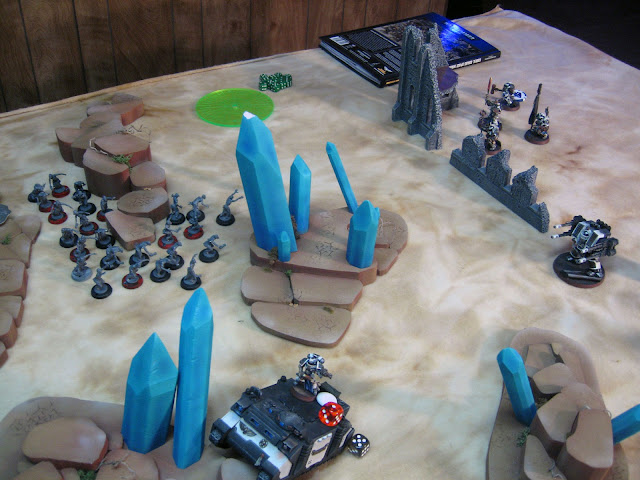 The second zombie horde continue to push for linebreaker and my objective, but they're very slow. 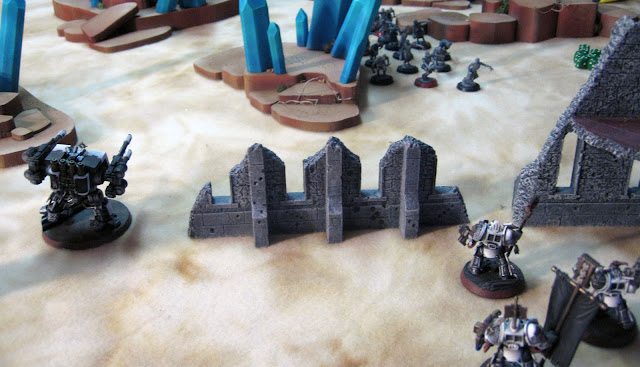 And my terminators are cutting down ranks of them as they advance. 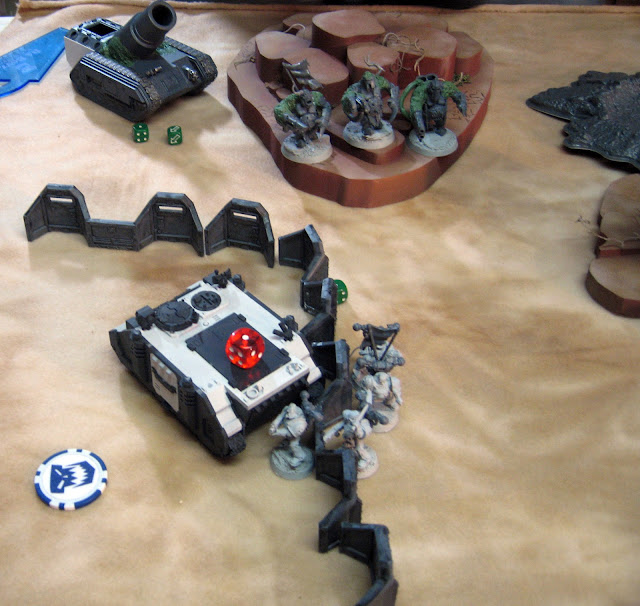 The plague marines pull around my rhino and get a good run, claiming his objective.  Another colossus shell lands true and splatters my inquisitor (warlord). 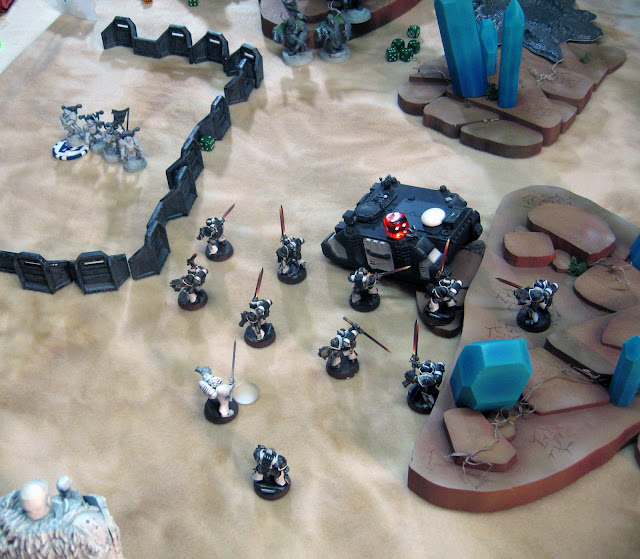 I bring up the strikes and jump them out.  18 stormbolter shots (str5 w/ reroll 1's to wound), 4 psycannon shots, and the rifleman dread open up on the plague marines, but 1 survives. 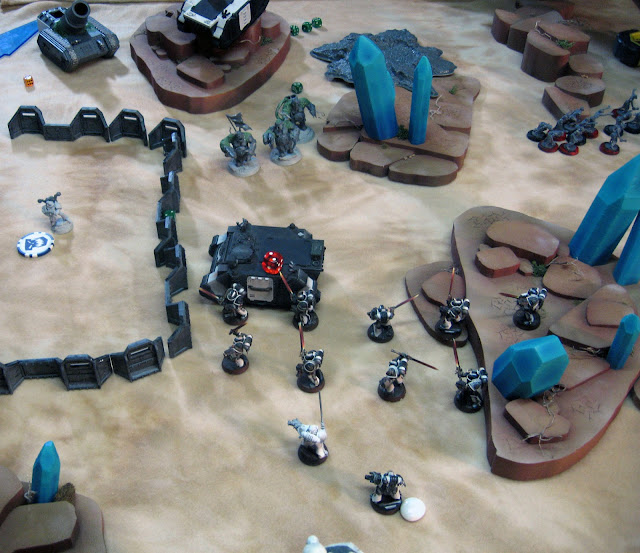 Oblits come around bearing assault cannons and gun down most of the strikes with the rest breaking and falling back. 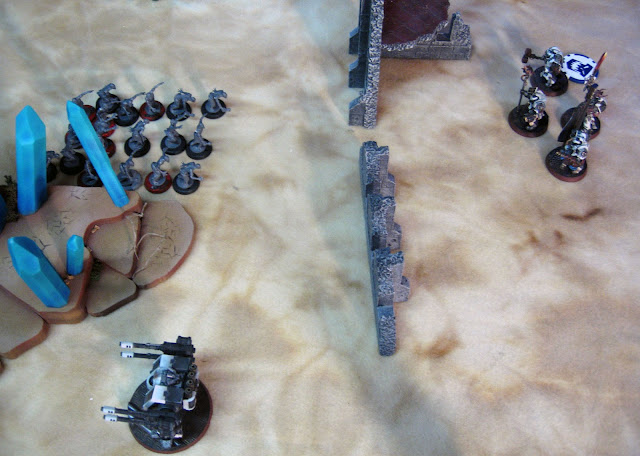 The zombies push again for linebreaker, but are about 3" short.

We roll again and the game ends at the bottom of turn 6.  We tally up the score and it's a 5-5 draw!  The lone plague marine scored his objective with terminators on mine.  Chris got first blood and I had linebreaker with purifiers.  Both warlords died.

This was a really fun and enjoyable game.  I haven't played a Mordrak "shock" list since 5th ed. and this was Chris's first game with his Typhus list.  We discussed the usual "what if's" after the game and Chris lamented not putting his oblits centrally in the ADL.  Their additional fire support would have helped a lot against my ghost knights and NDK's.  I could have committed the strike squad a lot sooner after seeing that his offensive push consisted of 2 spawn and zombies.  Dice as usual were out of control.  I was was above the curve with invulns, but Chris had some crazy luck in assault and with colossus shells once my units had disembarked.  My list didn't have enough bodies for a tournament setting, but it's definitely a ball to play.  One thing that is really big in 6th is the change to transports.  Moving 12" and then 6" with flat-out is a big buff to transports.  I'm not a big mech player, but I was also really glad I had them against that colossus.  Barrage sniping with str6 ap3, ignores cover is no joke.
at 8:00 AM