Posted by Calypso2ts
This is a game I had the chance to get in a few weeks ago versus a combined arms Space Marines/Space Wolves force.  I want to share it because it really worked to highlight the advantages that CSM allies can bring to a Daemon army.  Unfortunately I cannot recall my opponents name - he was a great guy who just happened to be looking for a game that weekend.  He had a board setup already and we rolled up: 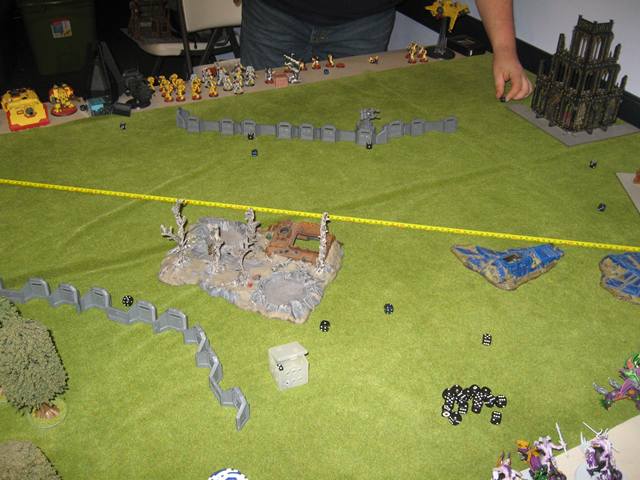 
I brought with my my standard fare 1850 w/ CSM allies list:

HQ
Herald of Tzeetch w/ Bolt, We Are Legion, Master of Sorcery on a Disc
Sorcerer w/ Spell Familiar and Mastery Level 3

The opposing coalition brought to the field:

It turns out my opponent was running around 300 extra points this game, but I did not realize it until after the game!

I roll up my warlord trait and psychic powers and grab: 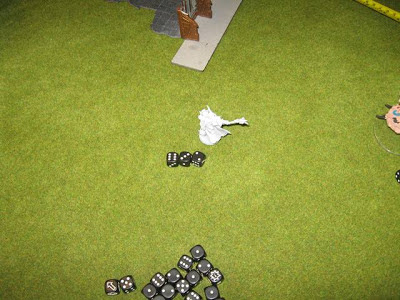 I am using the CSM from the DV set wielding a mace for the Sorcerer and I grab Hallucination, Mental Fortitude and Puppet Master. 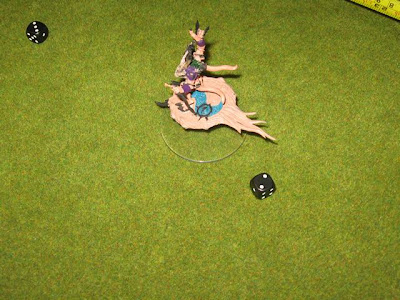 I grab a 2 on the strategic table so I can be a Night Attacker.  I always welcome Night Fight with my Daemons to protect them so we have Turn 1 Night Fight.

My opponent rolls on Telekinesis and gets Vortex of Doom and the Primaris power - his Warlord trait is useless to him.

Aegis lines go up and I hide the cultists and Sorcerer as best I can from his shooting - careful to stay 32" away.  He deploys in a long line and infiltrates some scouts into one ruin while scouting the Storm ahead. 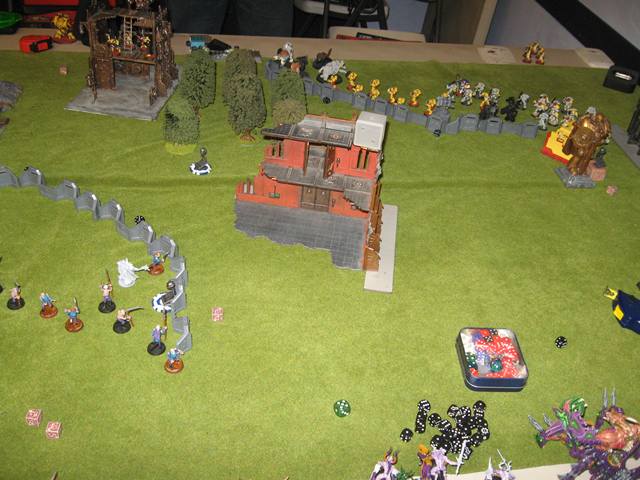 I also grab the first turn, and my opponent fails to seize. 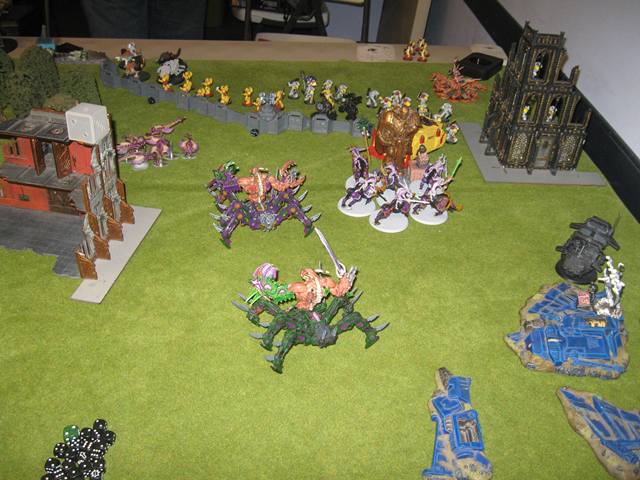 I choose the Screamers, Crushers, Grinders and Flamers for my Alpha Strike style wave and get it.  They come in without incident and the shooting is brutal. 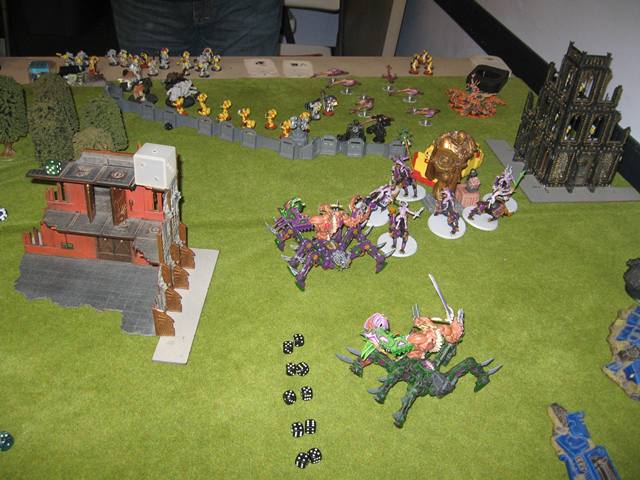 There used to be some Blood Claws in the backfield and I create a screamer wall to protect the Flamers from assault.

In response the Ironclad comes in, whiffs with one Melta and I save the other. 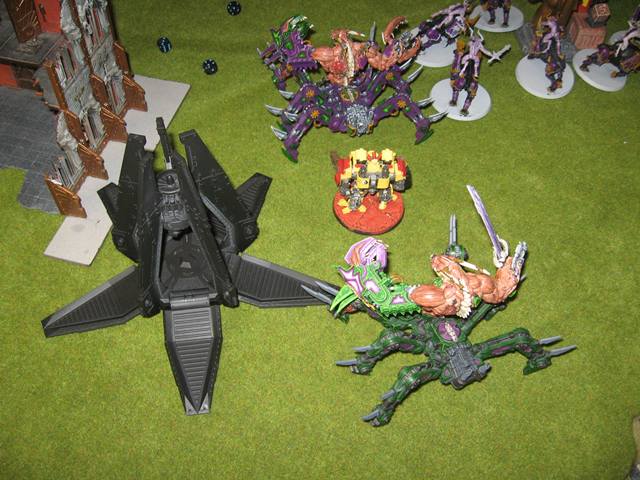 The rest of his shooting whittles me down to one Flamer and his Thunderwolves assault into the Screamers - but we stick while his saves are hot. 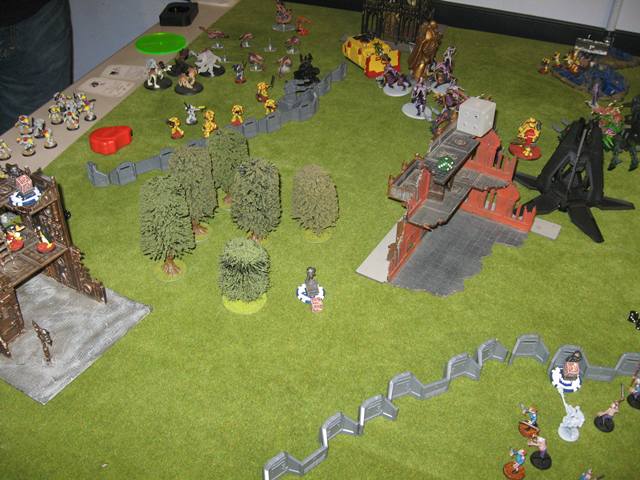 With the comms relay I get all of my reserves to come in.  One unit of Horrors to shoot at the speeder - they wreck it with glances - the Fiends up close and personal while the other Horrors will try to take a rear armor shot at the dread.  In the top left you can see 12x Daemonettes who deep struck into the basement of the ruin to take down the snipers. 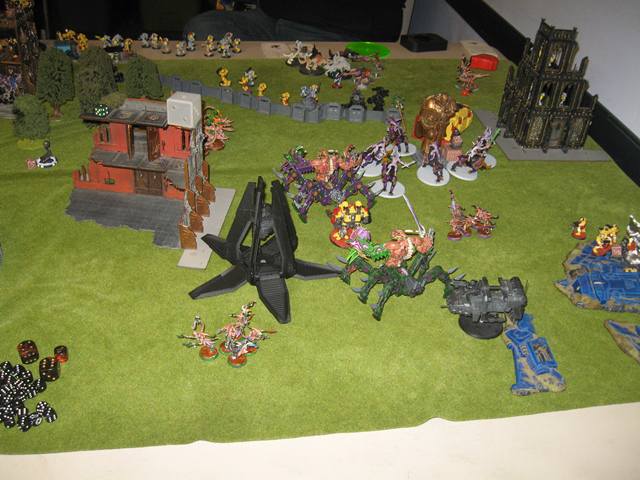 The crushers make their charge on the Thunderfire and Vindicator - wrecking both - while the grinders advance.  Interestingly enough, the Dreadnought wrecks himself when Hallucinate causes him to punch himself with his own Seismic Hammer - whoops!  That problem is solved, I was going to put both Grinders into him. 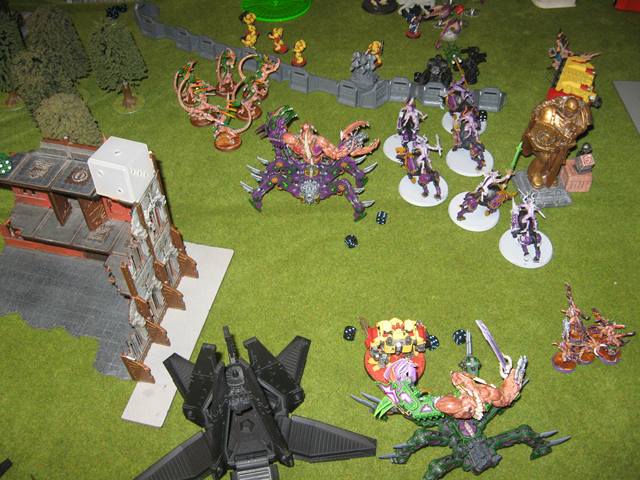 I attempt a charge on the squad with a missile launcher and he rolls a perfect 6-6-6 to explode it with overwatch! 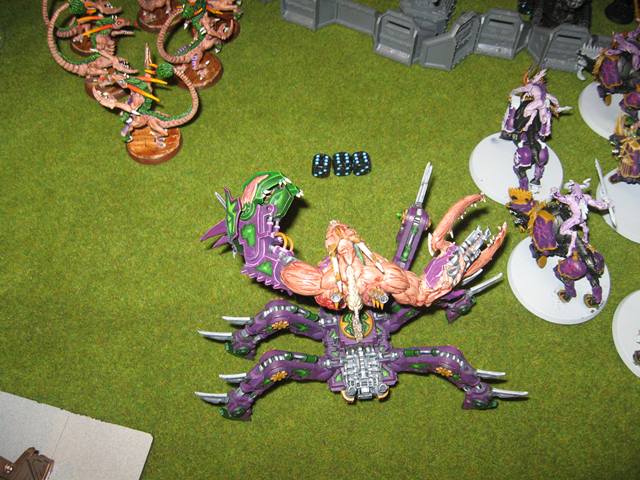 The Fiends though are looking to hide behind that Aegis and then finish them off next turn. 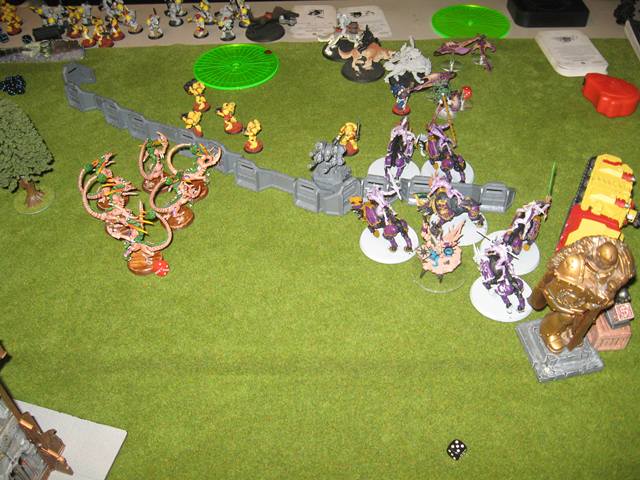 My opponent's Storm Talon does not make it in this turn.  The Librarian elects to confront the crushers using Vortex of Doom - but he perils although he makes his save.  This game is getting lopsided quickly - also in the background the Screamers have chewed through a few models, while the Lord is implacable.  I end up with a wound on my Fiends from combined shooting but that is it. 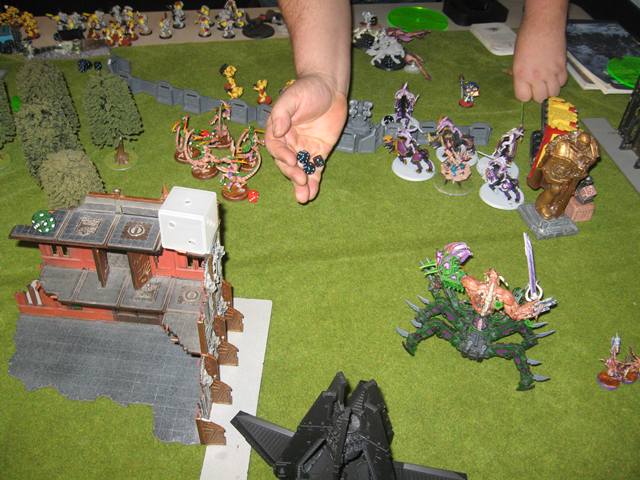 The depleted Horror squad has been plinked away by the Drop Pod and the unseen scouts to the right. 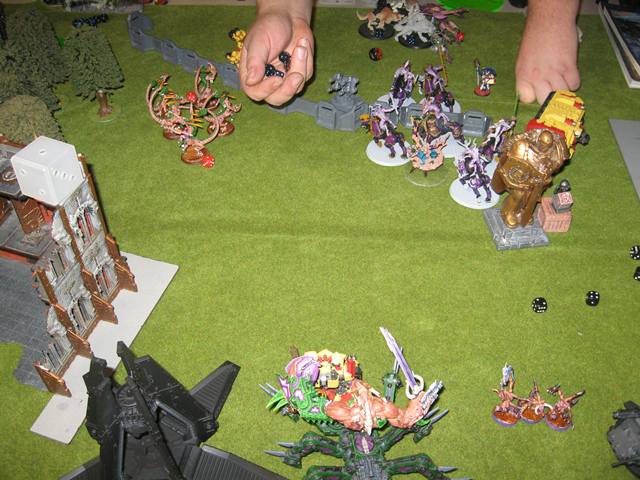 My remaining Horrors finish off the Scouts and start to plink away at the Marines in the ruin to the right. 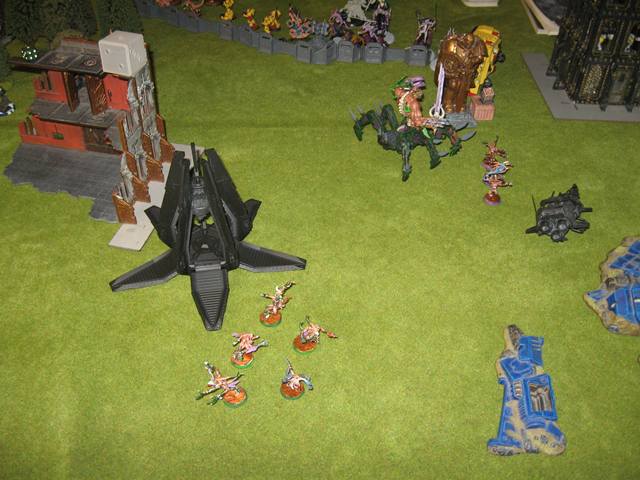 In the meantime the Crushers pile into the Wolf Lord and the Librarian while my Warlord continues to hide.  I was hoping to put him with some screamers, but he should have tried to make it to the Horrors. 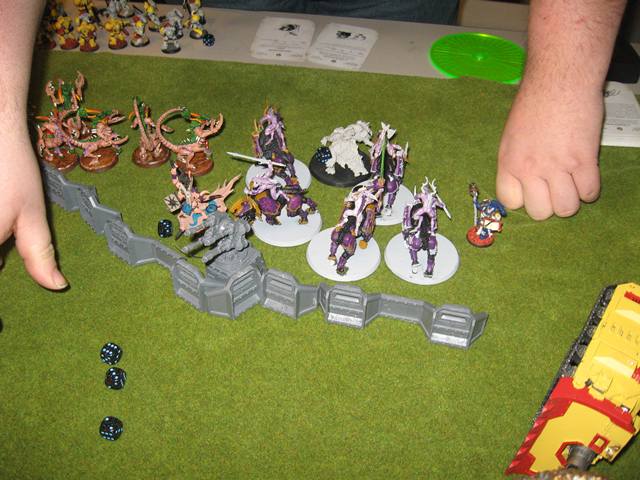 The Daemonettes murder the Scouts and sit on the objective - probably dancing and drinking from the looks of it. 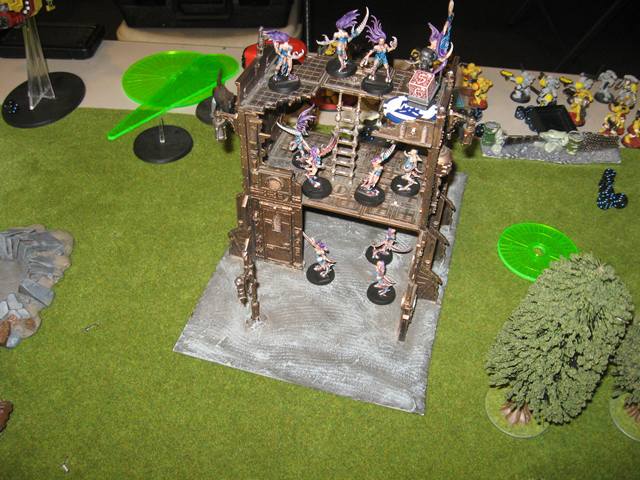 Finally the Storm Talon makes it in Turn 4 and finishes off my Warlord. 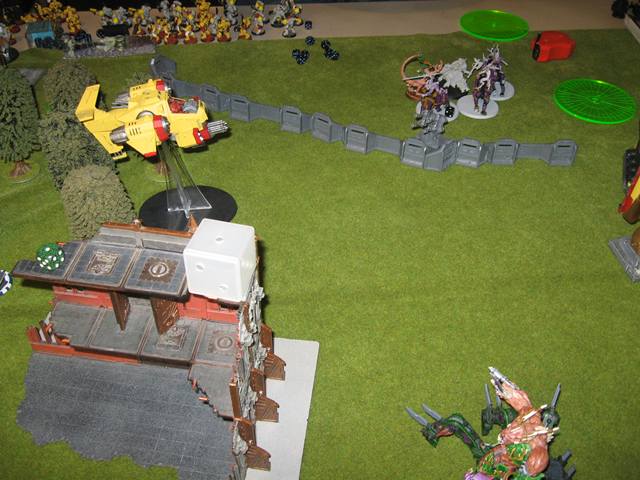 I finally finish off the Wolf Lord and I take it with 3-0 with First Blood and Linebreaker (while we both have Slay the Warlord).

In spite of the point deficit a Daemon army that has rerolled reserves and some psychic augments can bring the pain.  The truth is that Daemons were never designed to be able to put so many models down so quickly - 3+ reserves and a reroll, compared to 4+/3+/2+ in 5th edition.  They stalled against the Wolf Lord a bit - but he had some very hot saves and is decked out such that he should dominate in CC.  Overall, I have been taking this list since mid December to casual play and tournaments) with some minor variants in the Elites/Troops slots and have tabled every opponent so far.  I like to think it is all my skill, but the truth is the army is very potent now.  As a Sisters of Battle and Daemon player it is a bit refreshing to have a strong rule set to play behind.  With the rumors of new Daemons around the corner I hope they remain competitive.

The playstyle of Sisters was already ruined for me when they released the new Magazine Book - I am hoping the uniqueness of Daemons that I really treasure remains intact.  Losing Fearless and Eternal Warrior is okay and a natural modification but I hope their deployment remains unchanged from its current incarnation.  It is one of the few armies that really plays completely differently from the others and it is refreshing for me to have it that way.

In the meantime, I have continued painting up my CSM's and added another finished model this week - I am slowing down with home improvement projects and a new job in the mix.  I also got a hold of a second Dark Vengeance set which means another 20 Cultists and 5 CSM.  Also a Helbrute but I am hoping to convert that to a different Daemon Engine with the new Daemons book.  A painting update for next week.
at 10:04 PM