In my last post on Throwback Thursday - Gaming Style I touched upon my roots with role playing and how it kick started my interest in gaming. This week I want to touch upon another game that had a huge impact on my gaming during my teenage years, however it wasn't a board game or a role playing game, it was a computer game. Back in either 1986 or 87 I purchased my first computer, an Atari 800XL and one of there very first games I picked up for it was OGRE. Now I know that this game originally started as one of Steve Jackson's Pocket Games but up to that point I had only heard of OGRE and CarWars but had not been able to find a copy of either game or play them. I remember seeing the cover of the box, was intrigued and quickly bought it.


The Atari 800XL was a 64 bit  computer and as most systems back then, had very little for graphics. 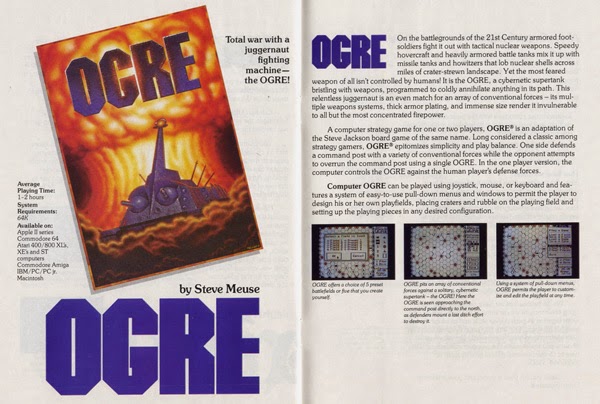 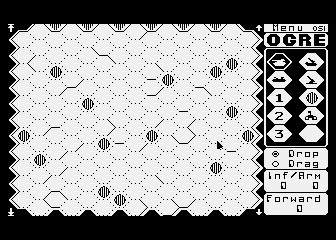 As you can see from the above pictures, the game is simply a hex-based map where a giant tank of the future is trying to destroy your command post with an awesome array of fire power and you must stop it with your futuristic army of heavy tanks, missile tanks, GEVs, howitzers and infantry. The mechanics are simple and are based off of ratios of attack values vs defense values.

I must have spent countless hours playing this game over and over again on my computer for 2-3 years before I sold off the Atari. Eventually I found a copy of the physical game and played that until the map fell apart and I lost many of the chits over time.

Much to my surprise I caught wind that Steve Jackson Games re-released a throwback edition of OGRE this summer and I raced to my local game store and picked up a copy and started to teach my son to play. 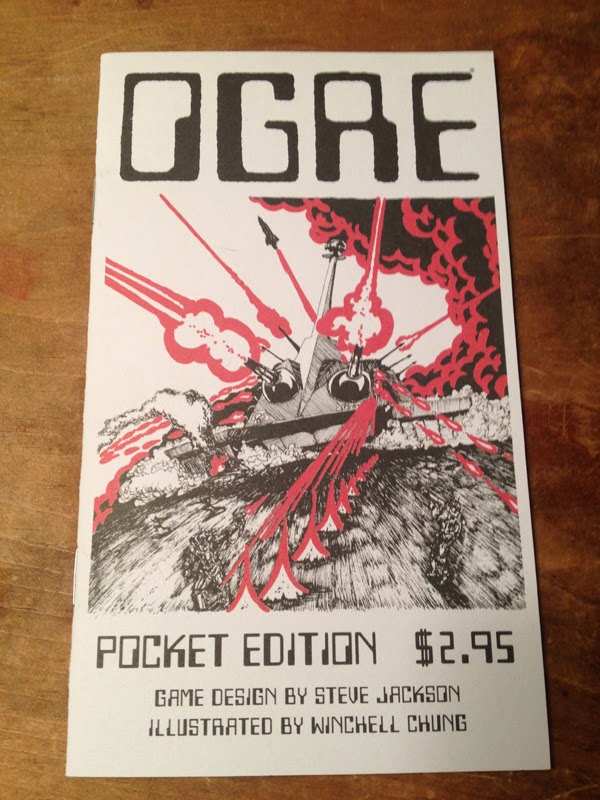 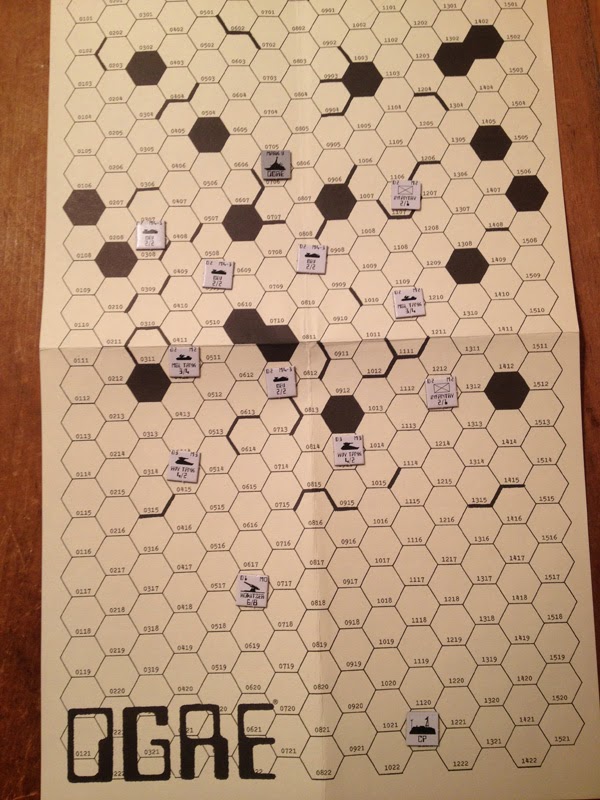 The best thing about this re-release is that nothing changed from when it was first released. The map, rulebook and counters are all as I remembered them and I quickly fell in love with the game again. If you have never played OGRE or used to play it then I would highly recommend that you find a copy of the re-released pocket game at your local store. The best thing about it is that it sells at the price it originally did back in the 80's, $2.95!!!!

In the next couple of months there will be three large tournaments coming up in the Western NY region that I will be attending and I wanted to touch on them quickly.

Crossroads 2014 GT - September 6-7, 2014
This event is one of the largest Warhammer Fantasy events in the region and repeatedly sells out year after year. I attended the 2012 event but missed last year's so I am really excited to go again this year. This year I will be playing my Warriors of Chaos list. 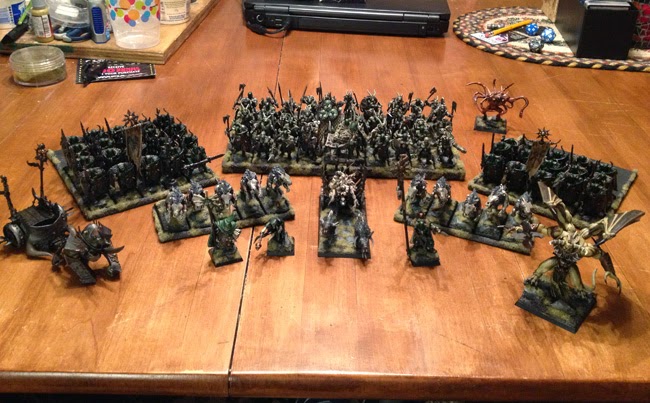 Here are some shots that I took of some armies in 2012.

I plan on taking a lot of pictures during the weekend and plan on recapping the event in a future post.

This is the first 40k GT being run by my friends and Buffalo area gaming group known as Beef  and Wing. Some of you from outside of the area have probably run into them at Adepticon where they have ran a Emperor's Children list for the past couple of years. Buffalo has been sorely lacking a gaming scene for the past few years and these guys have decided to pool their resources to put together a kick-ass GT. 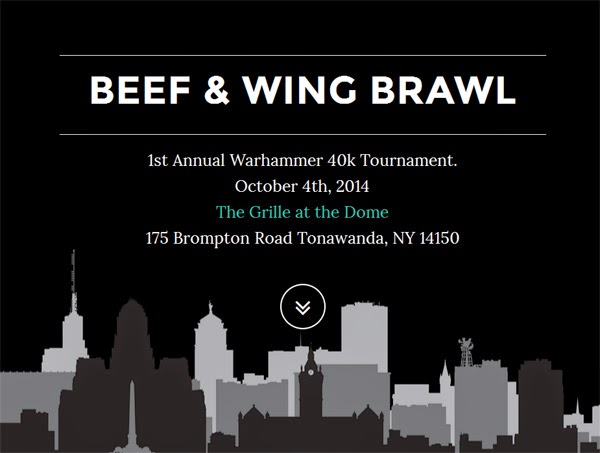 The format for this event is 1250 points over 5 rounds and a big emphasis will be placed on painting and sportsmanship. These guys are great gamers and really care about all aspects of the hobby. Many of the area players will be supplying terrain for the event so expect to see some really nice tables. If any of you have attended the Da Boyz GT or have seen Chris Courtney's Tau table at Adepticon then you will know what to expect. The guys of Beef and Wing are also offering an open bar and free pizza and wings during the day. Prize support for this event will be huge as well. Last I have heard they have well over $1,000 in prize support.

Here are some of the types of tables you can expect to see. 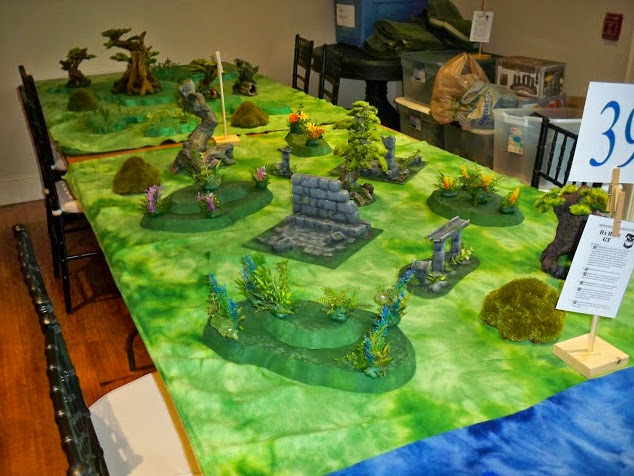 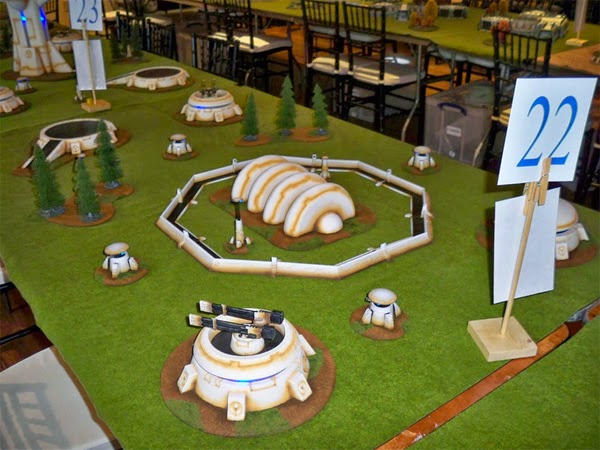 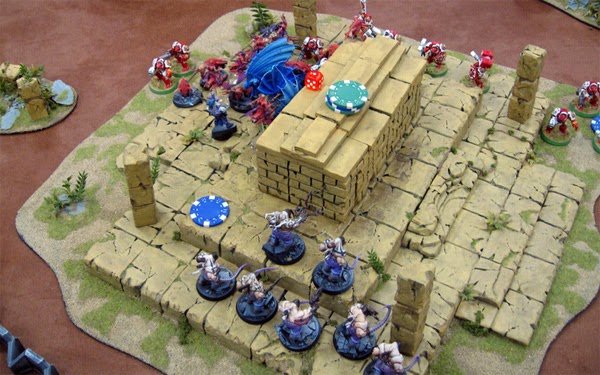 I am currently working on three tables for the GT as well.

There is still space available for the event so if you are interested in learning more please visit their site at: http://www.beefandwing.com/


I've attended this event for the past 5 to 6 years and it has always been my most anticipated event to attend. However, this year I am volunteering my services to help run the event so you won't see me playing any games except for the team event on Friday. This event is a huge draw and brings in some of the top players from around the country.

You can learn more about the event at: http://daboyzgt.com/