Swamp Board Terrain - The 3 Pillars 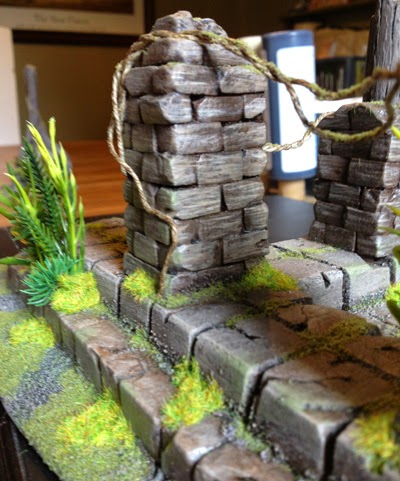 I have completed another piece of terrain to go along with the swamp board theme and I've aptly named it the 3 pillars because, well it has 3 pillars on it. Rather than go into details of how I made the pillars I'll refer anyone who may have missed the post where I created a piece called the Sentinel. You can see how I made the pillar here. This is a much larger piece than the last ones and I've incorporated a tree which has its roots growing out and over the ruins, much like you see in images of temple ruins in Southeast Asia. Recently I purchased some Hirst Arts molds to create blocks and tiles to make it easier and quicker to knock out terrain pieces rather than making the blocks by hand. In this project I've started to incorporate some of those blocks into my terrain. So lets take a look at how I created the 3 Pillars.

First off I cut the template for my ruins out of pink foam. 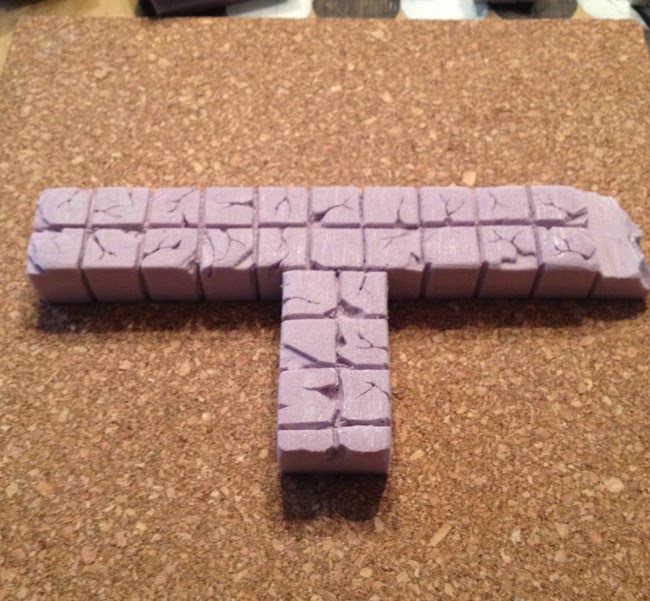 Then I cut in grooves and cracks with a hobby knife until I achieved the desired affect.

Next I glued on the 3 pillars. 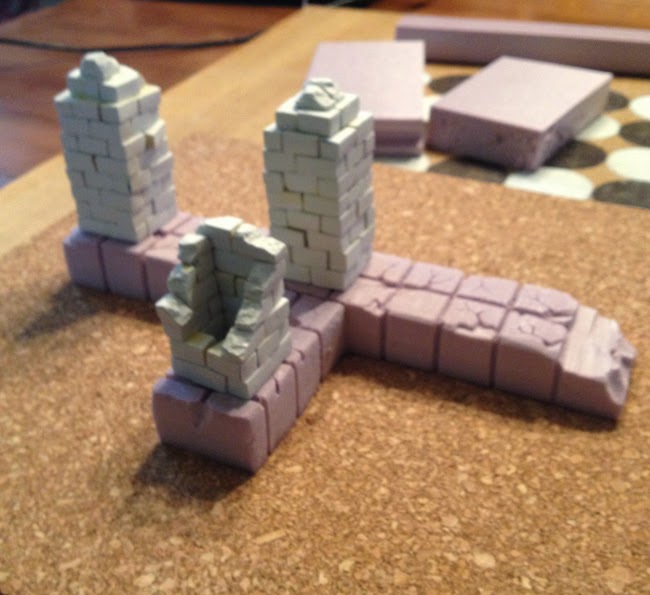 The pillar that is half formed was intentionally left that way so that I could add in a tree. 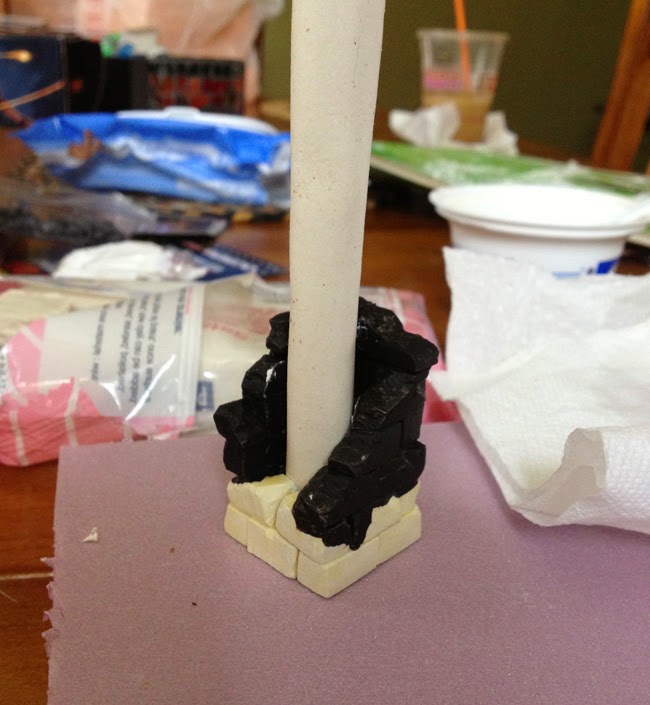 In the above image I rolled out a piece of clay and stuck it into the middle of the ruined pillar. 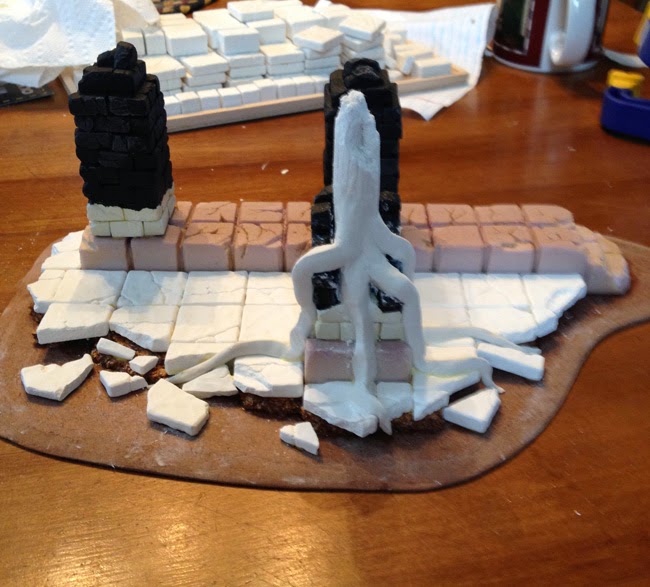 Here you can see I started to add the tree roots that have overgrown the pillar and spilled out over into the area ruins. I also added in the flagstones from the Hirst Arts mold to make it look like that this section of ruins once might have been part of a temple complex or some other structure. 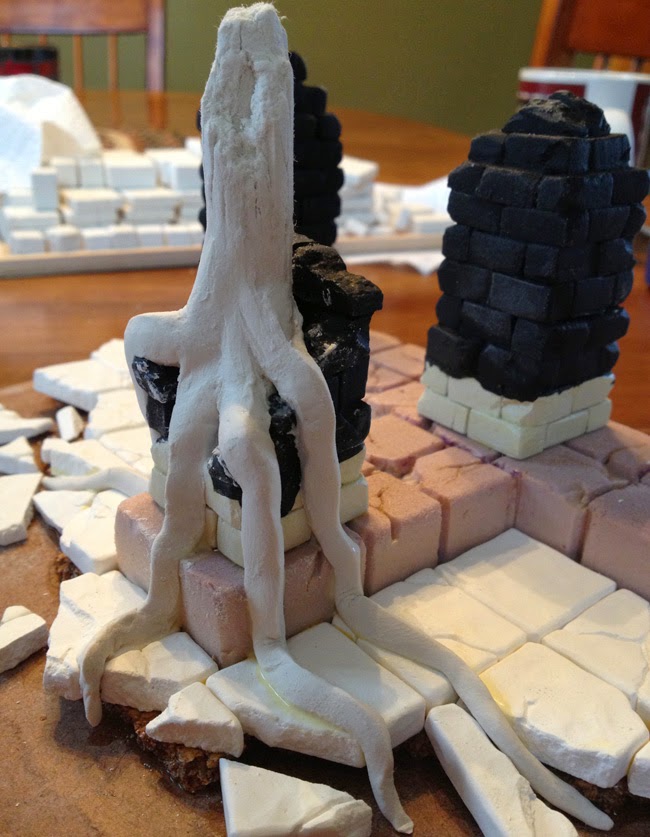 I also attempted to carve in a bark-like texture and I broke off the top section of the tree to make it appear as if the tree top snapped off in a wind storm. 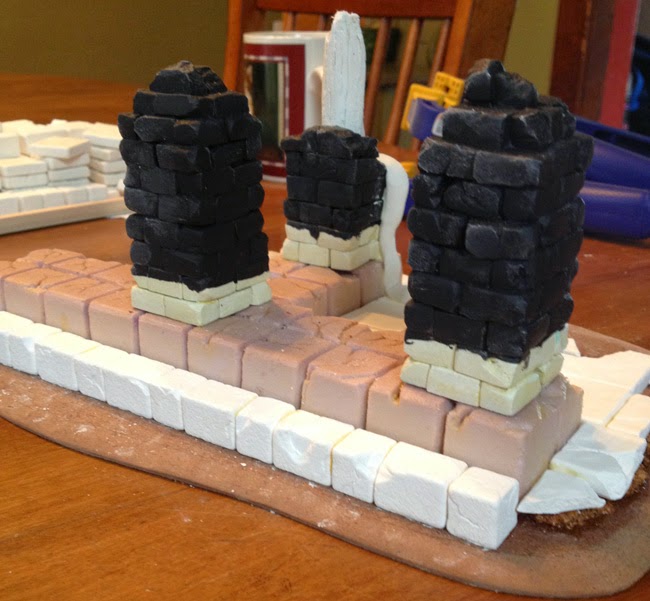 Here you can see some more of the Hirst Arts blocks along the back wall. 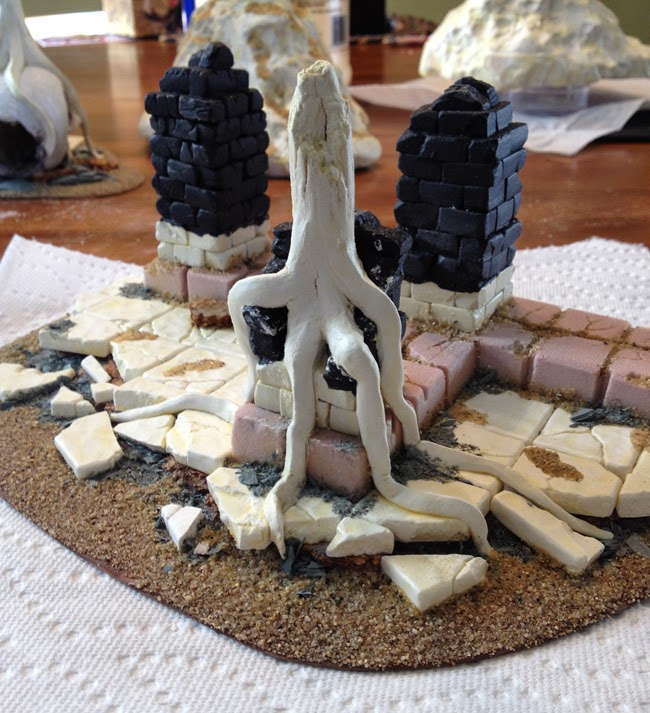 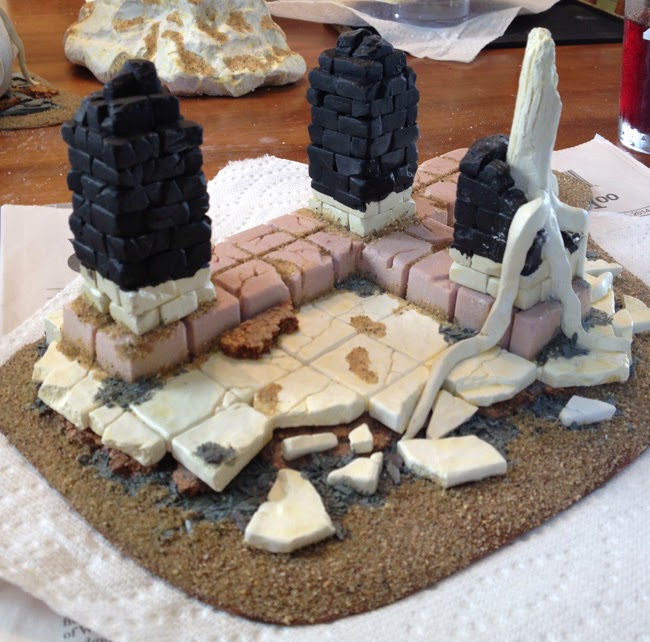 Next I added in pieces of shale and sand to complete the texture for the piece. 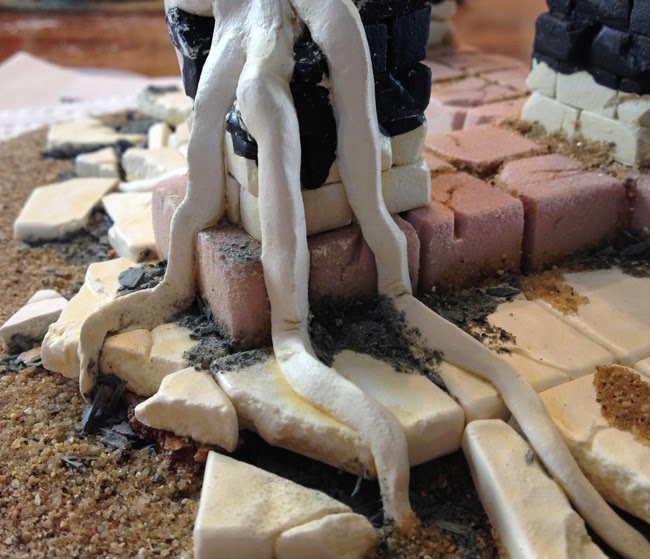 Close up of the roots and flagstones 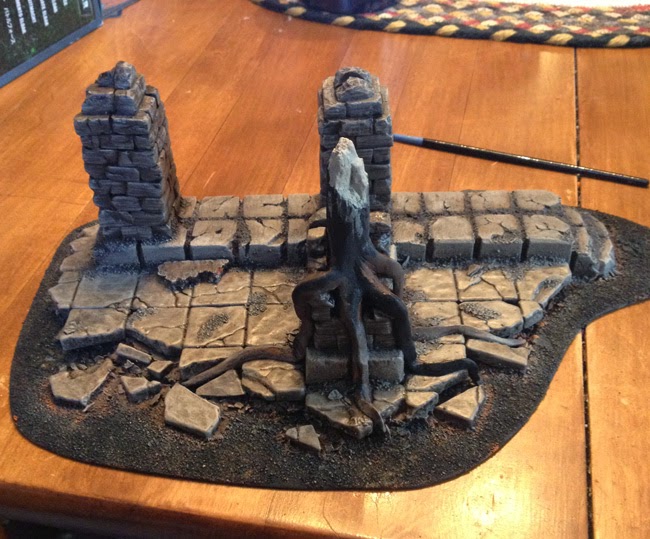 Next I primed the piece and started to paint the stonework to match the scheme I used in earlier pieces. 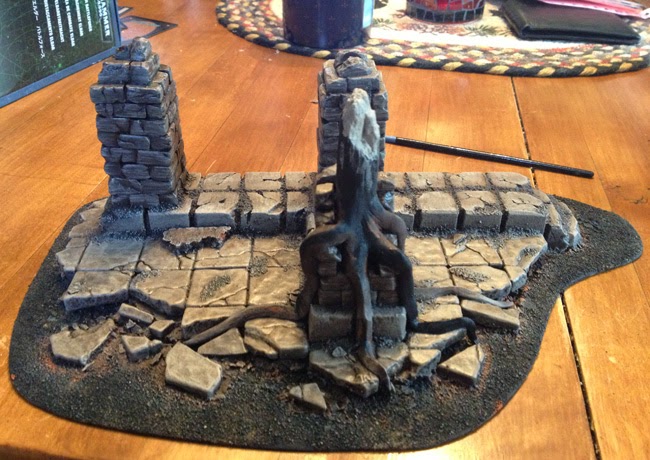 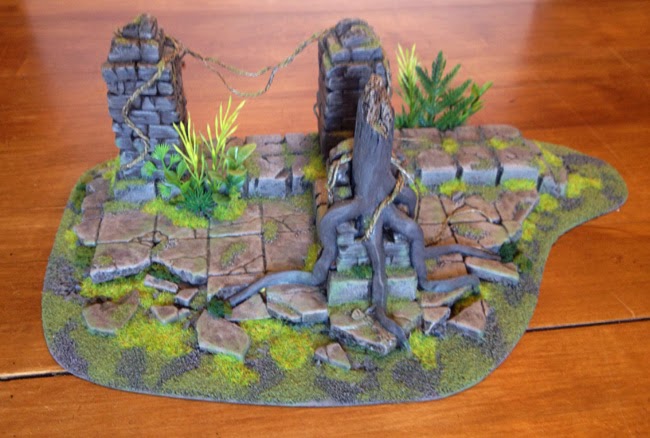 Once that was done I added the vines like I highlighted in the last swamp ruins post and then I added the grass flocking materials. 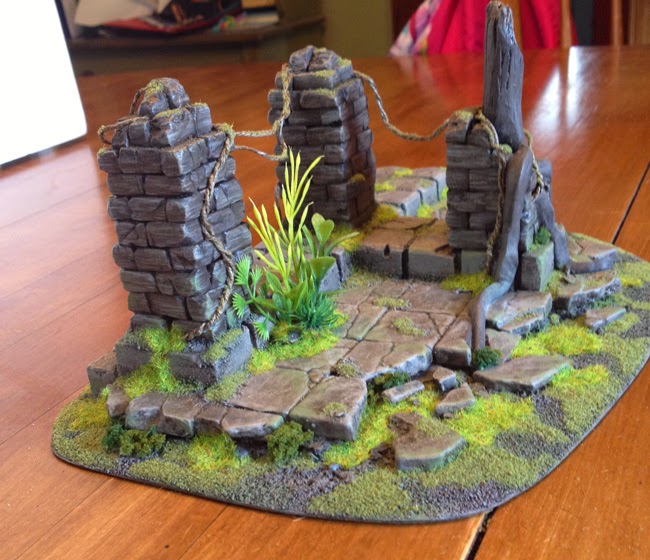 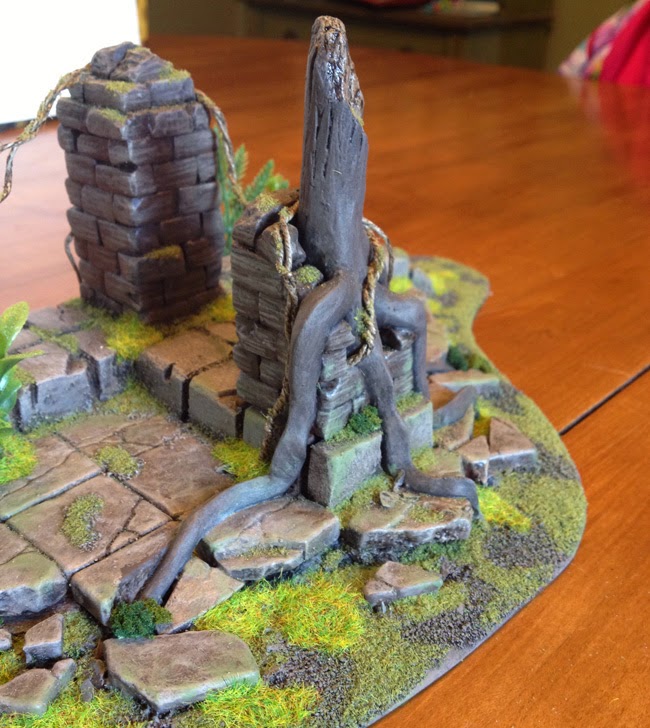 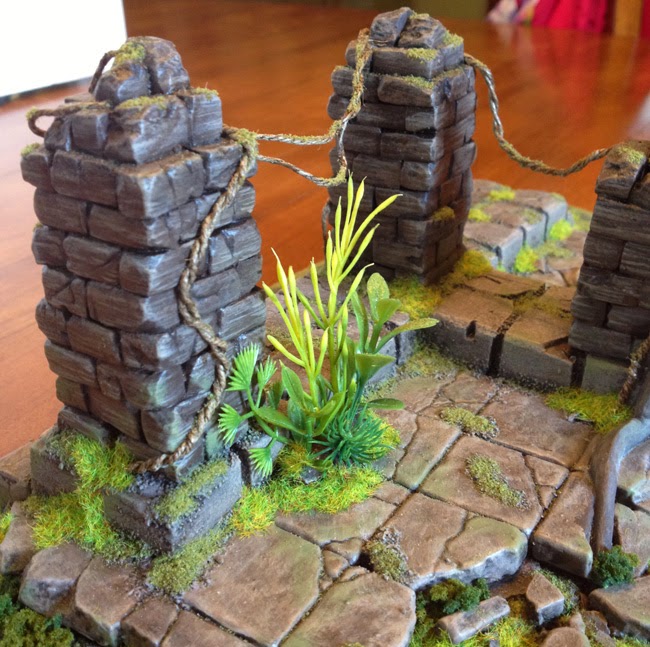 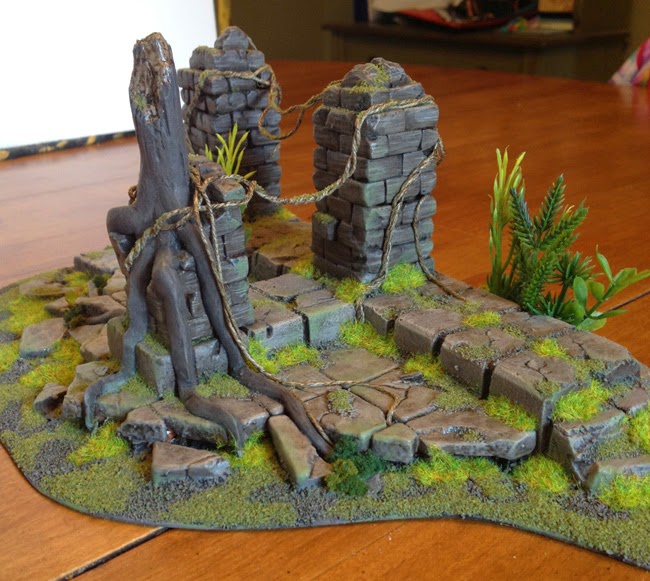 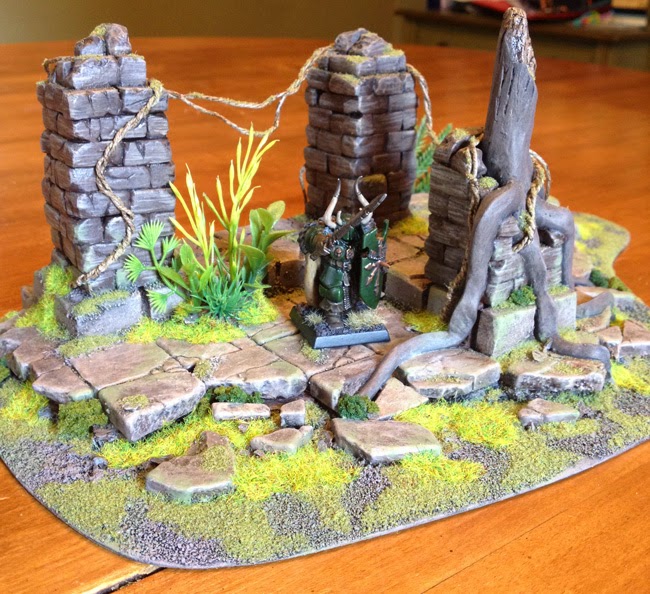 Here is a Warriors of Chaos model added for scale. 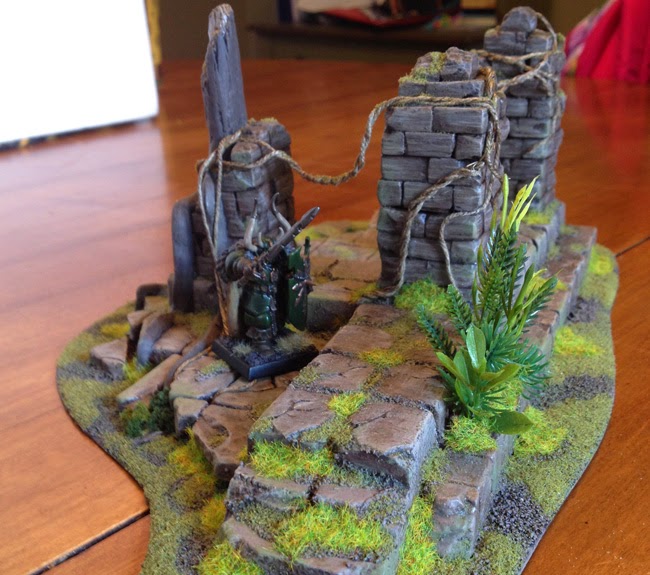 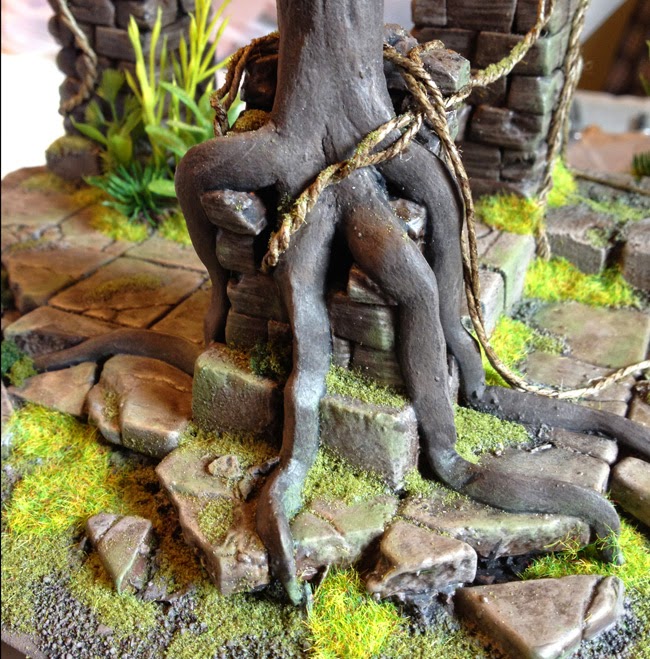 Another close up of the root system. 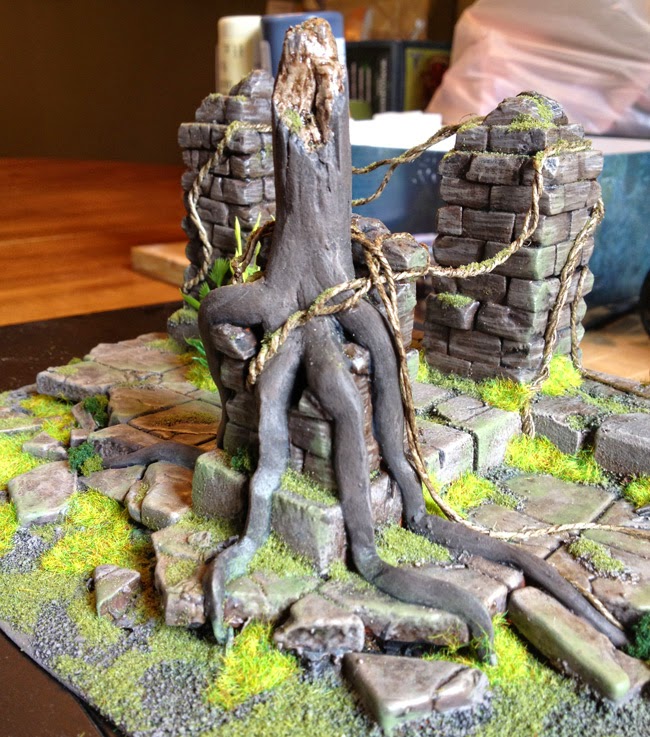 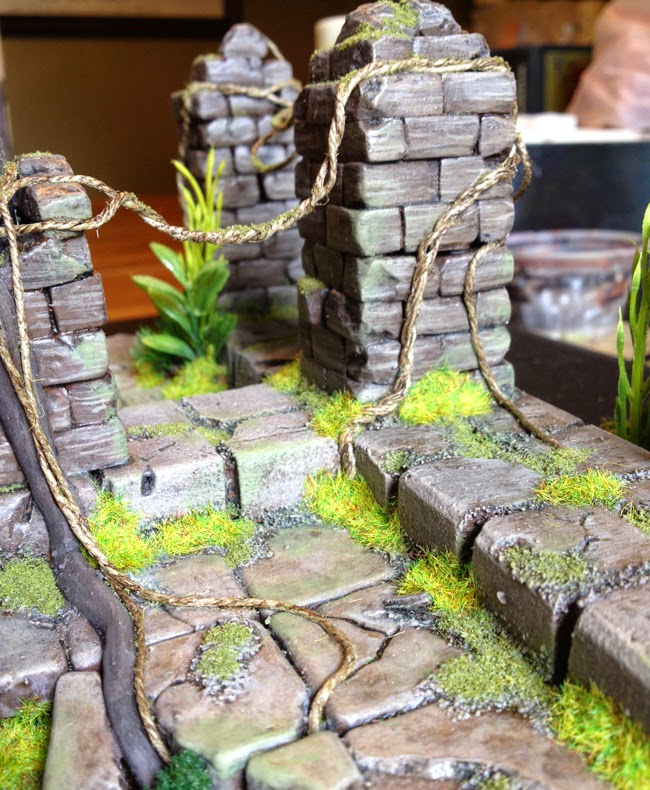 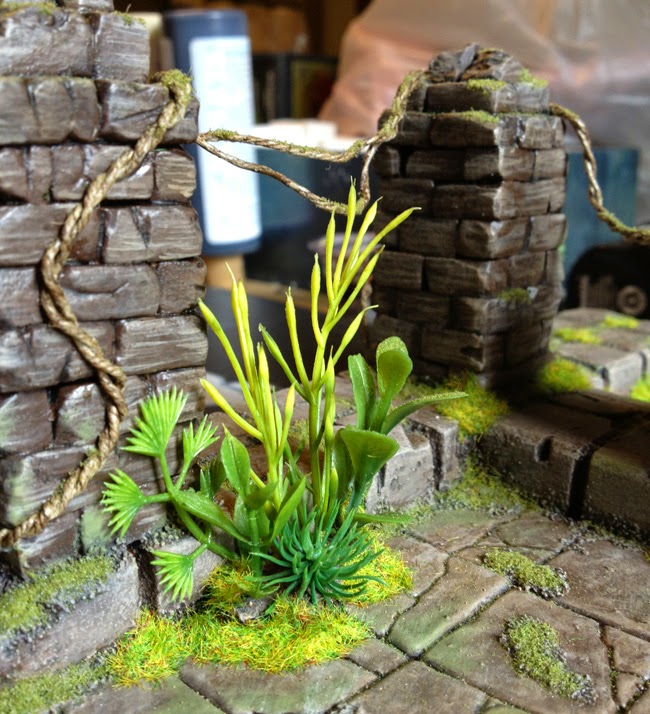 I hope you enjoyed this piece. If any of you are planning on attending the Beef and Wing Brawl in Buffalo NY next month, I will be bringing all of these pieces plus some new boards that I have been working on as well.

Next up in the swamp terrain series... The Silent Watcher.