Posted by hyv3mynd
I apologize that all of my recent articles have been dark eldar hobby, but that's literally all I have time to do anymore.  Here's a rundown of my 40k hobby progress this week.

If you've been following my progress since November, you'll remember that grotesques were the first models of the army.  I wanted to do these conversions and paintings so badly that I designed an entire army list to make the unit work.  The final army will feature a huge deathstar of ten with three independent characters as a centerpiece.  Unfortunately, I have an attention issue when it comes to painting as I jump from model to model and rarely finish a unit from start to finish without deviating.  This unit still needs some finishing touches, but the original box of six ogres is now complete until I do bases for the whole army. 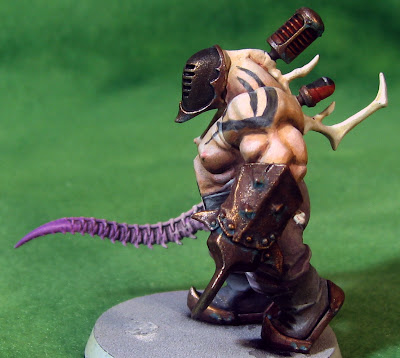 This was the first grotesque conversion and paint test model.  He's gone through several changes to achieve a scheme I was happy with.  This shot was taken from the side to show the detail work on his gauntlet. 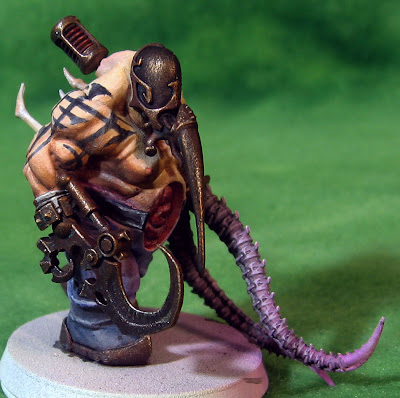 This one will serve as the aberration/champion.  He has the proboscis head and two tentacles to differentiate himself and represent the various wargear upgrades. 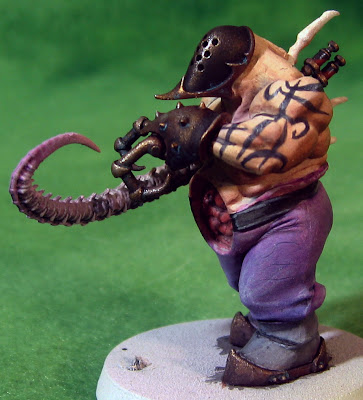 It's worth noting that these models are lit from both directions for these photos.  The shadows under the muscles and wrinkles in the fabric are hand blended. 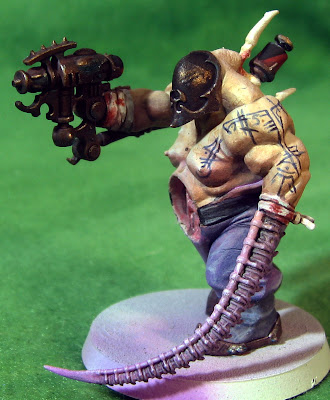 I tested a different tattoo scheme on the liquifier model in an attempt to match the glyphs on my venom.  I haven't yet decided if I will leave it or change it to match the others.  This was also my test model for battle damage on the face plate and blood on the bandages. 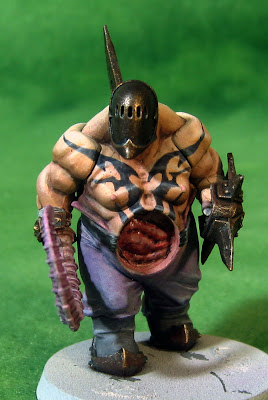 I wanted every member of the unit to be unique so each one has totally unique tattoo placement and patterns from his brethren.  On this one, you can see how I sculpted guts in the hole where the ogre gut plate would go.  One of the final steps will be to fill the holes with water effects.  The goal is to represent a portal of sorts that the haemonculi use to access their organs. 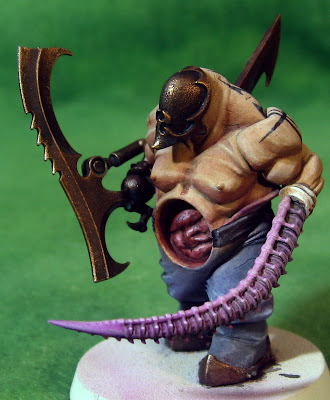 If you look close enough at the guts, you'll see they have tiny veins painted on and glistening reflections.  This guy has his tattoo on his back.

I spent just as much time shading the fabric on the pants as I did on the flesh since this is the side of the models I see the most.  The pants alone are base coated violet purple, shaded with thunder blue down to pure black in the darkest points, and highlighted up with dove grey.

I'm definitely pleased with the way the unit is shaping up.  Their huge mass is very intimidating as they tower over their dark eldar brethren.  They're converted and every model has at least 10 colors and freehand work.  Hopefully the painting judges like them as much as I do.  That, and I need to figure out how to make the unit work on the table.
at 11:11 PM