Posted by Calypso2ts
The Thanksgiving holiday gave me the rare opportunity to both test the list I was planning to run at the Millennium invitational and to play a casual 40k game without the intensity and time constraints of a tournament game.  This is actually the first non-tournament game of 40k I have played since June - it is a bit strange to play 40k in a casual setting.

For this game I had the chance to face up against a Slaanesh themed CSM army - with some very cool conversions, Noise Marines and a pair of Maulerfiends.


I wanted to do something a bit different for the Millennium invitational, the list I have been bringing to events tend to be very strong and really emphasize many of the 'best' units in the Daemons codex.  For this event I plan to bring a highlander army - there will be no repeats in any of my selections.  I also wanted to bring some fun units - the Blue Scribes with Daemonology are one of my favorite units now.  I also wanted to bring some of the less seen units in the codex, which lead me to the following list: 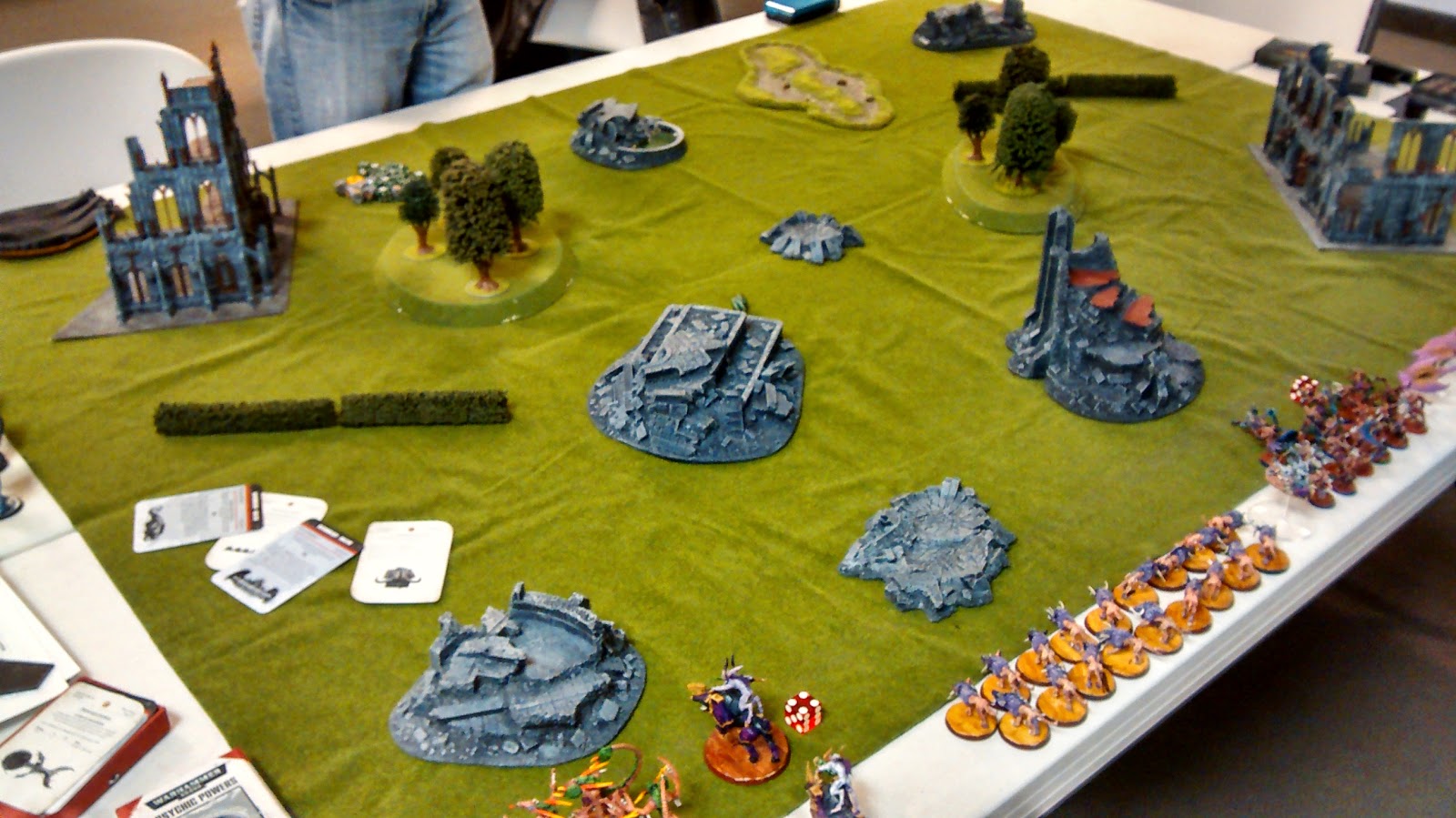 As usual this is a fast assault oriented list, with a lot of interesting deployment tricks.  I can outflank the Seekers/Flesh Hounds/Daemonetts or Fiends or simply scout up the Hounds Aggressively.  It has quasi shooting with the Screamers who provide a great screening unit.  Finally, the Crushers add...well something.  The Blood Hunter is actually pretty intimidating with 4 base attacks at S5 AP 2 and 3W.  As a first run for this list I had a chance to face a Crimson Slaughter list with a Slaanesh theme.  The list included:

We roll up Hammer and Anvil deployment with The Relic as the mission.  Since we both have assault oriented armies, this means there is definitely going to be at least one combat in the center of the board. 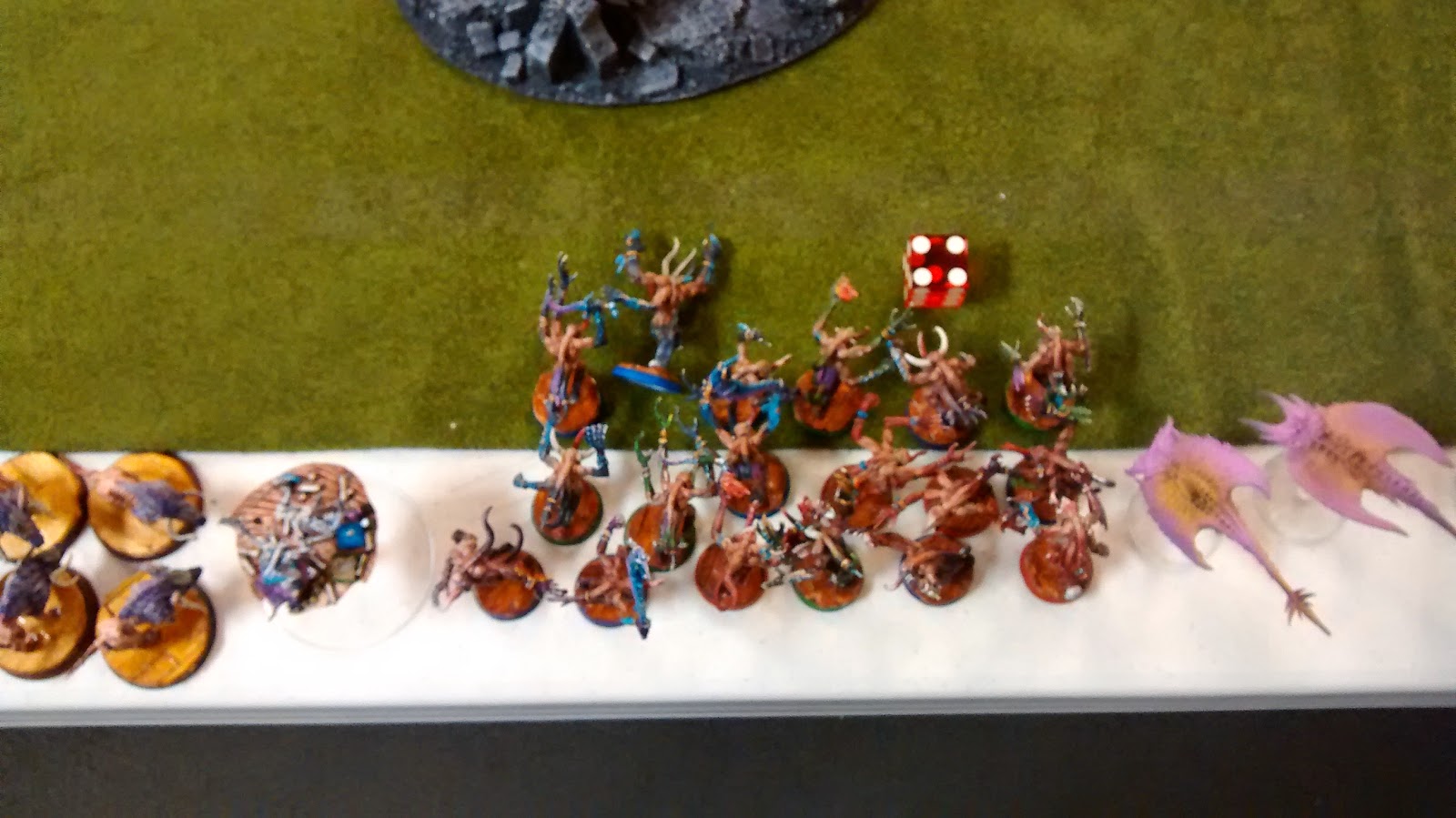 I roll up Dark Sacrifice (Summon a Herald) for my powers while the opposing sorcerer gets Summoning, Cacophonic Choir and Psychic Shriek.  The gifts rolled are irrelevant this game and the Lord snags Hatred for his Warlord trait while I get Immortal Commander (reroll Daemonic Instability) on my Herald of Khorne.  The two blank Crusher bases are unfortunate holiday travel battle damage. 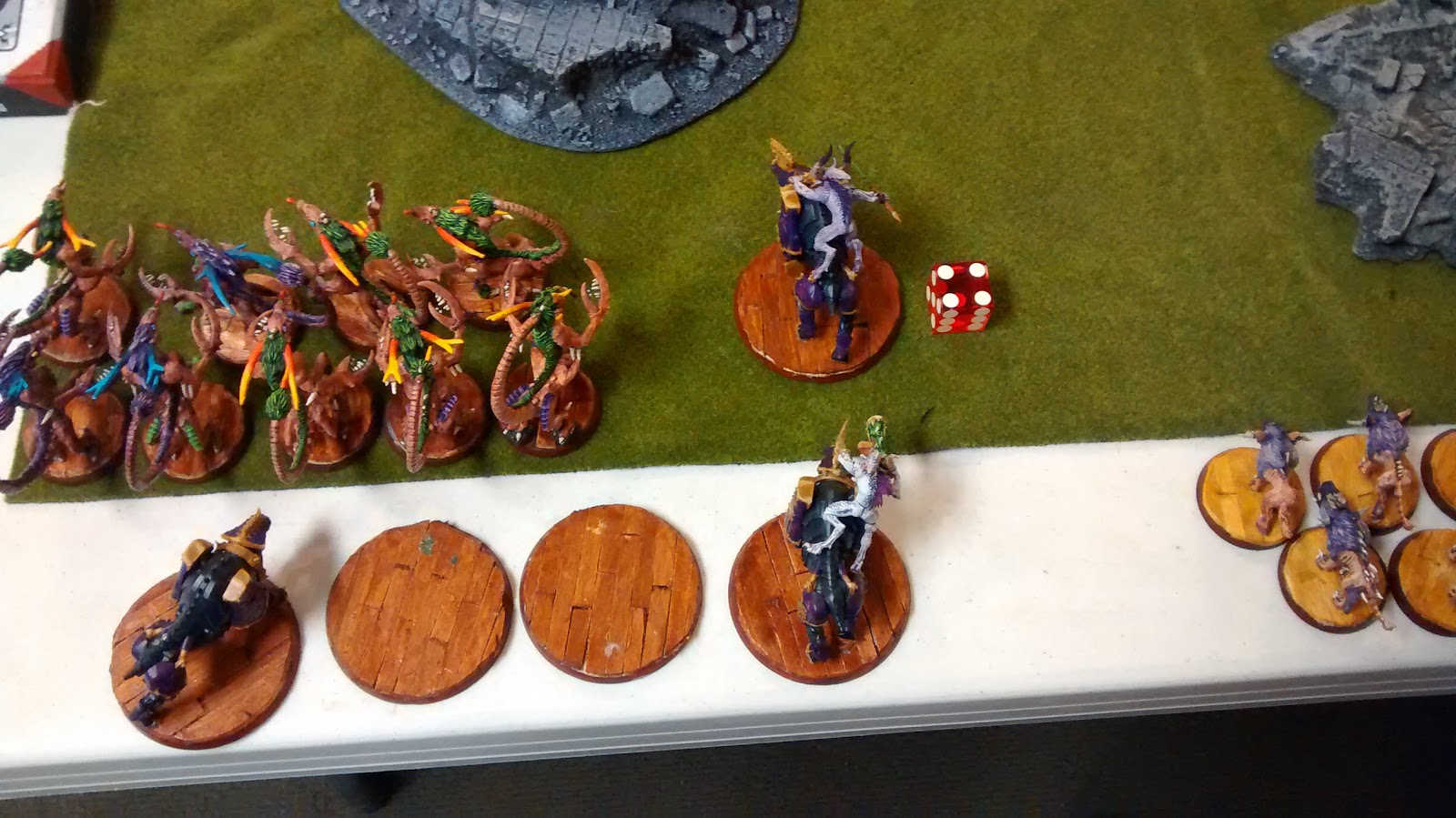 I promptly lose the choice of first turn, and will be going second this game.

Deployment
The Noise Marines are sitting in the ruins, they have range about 6" past the relic with their Sonic Blasters and there is really no way I can avoid those 4 S8 ignores cover Blast Master templates. 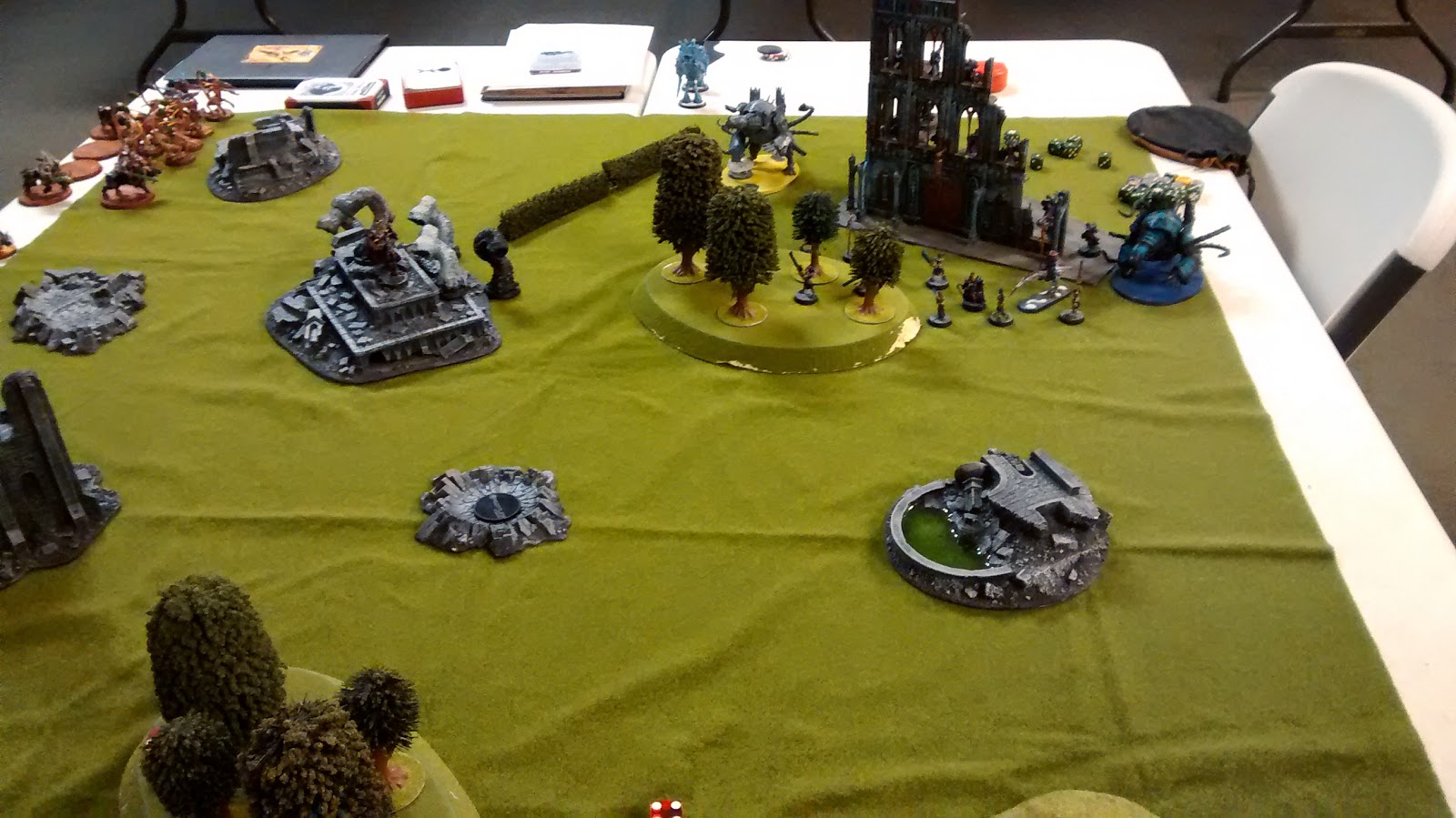 A larger concern is the twin Mauler Fiends that are setup perfectly for a counter assault. 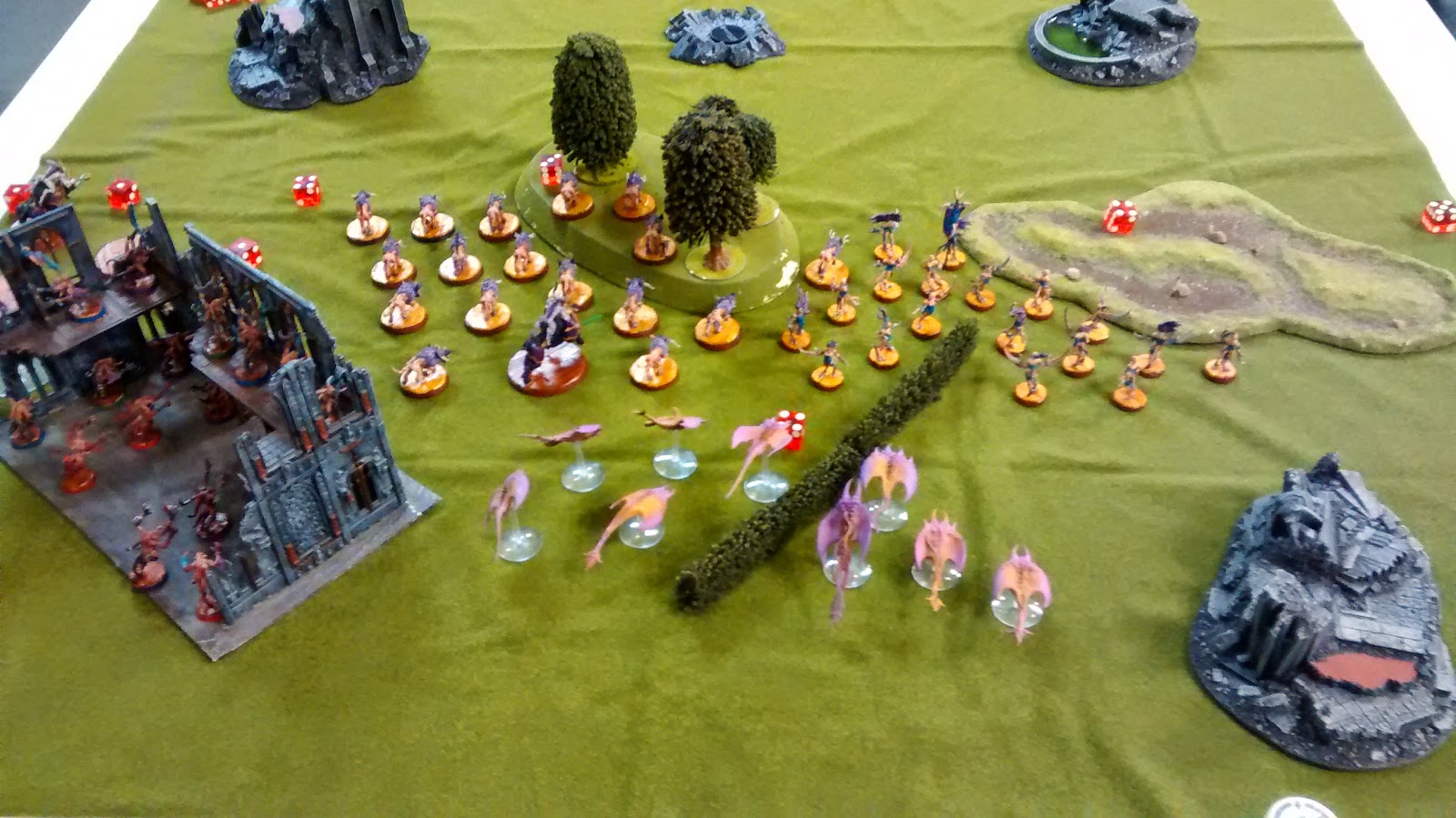 I respond by keeping the Screamers out of Blastmaster range - and just accepting that I am going to eat some shots on the Hounds/Daemonettes.  I want the Daemonettes nearby to counter charge into the Mauler Fiends - that way if they hit  a dog unit I can lock the fiend in place with the Daemonettes and then utilize 'Our Weapons Are Useless' to get out of there.  Outflanking are the Fiends and the Seekers and I opt not to Scout the dogs - since I am staring across at the Spawn, Chosen and Maulerfiends.

I also deliberately chose not to take the relic with the Screamers and then to Turbo Boost out of there.  I am not aware of an FAQ against it, but I could have Scouted to shield the relic, then grabbed it with Screamers and run to the back of my board.  This is cheesy as heck...I might have tried it at a tournament but I like to think I am better than that.

Turn 1
The Crimson Slaughter advance, and manage to summon a unit of Daemonettes.  The original target was the relic, but it luckily scattered back a bit.  All the runs at this point were either a 1 or a 2, a bit ironic for a Slaanesh army.  The Possessed transform into Beasts and high tail it forward to setup a potential assault. 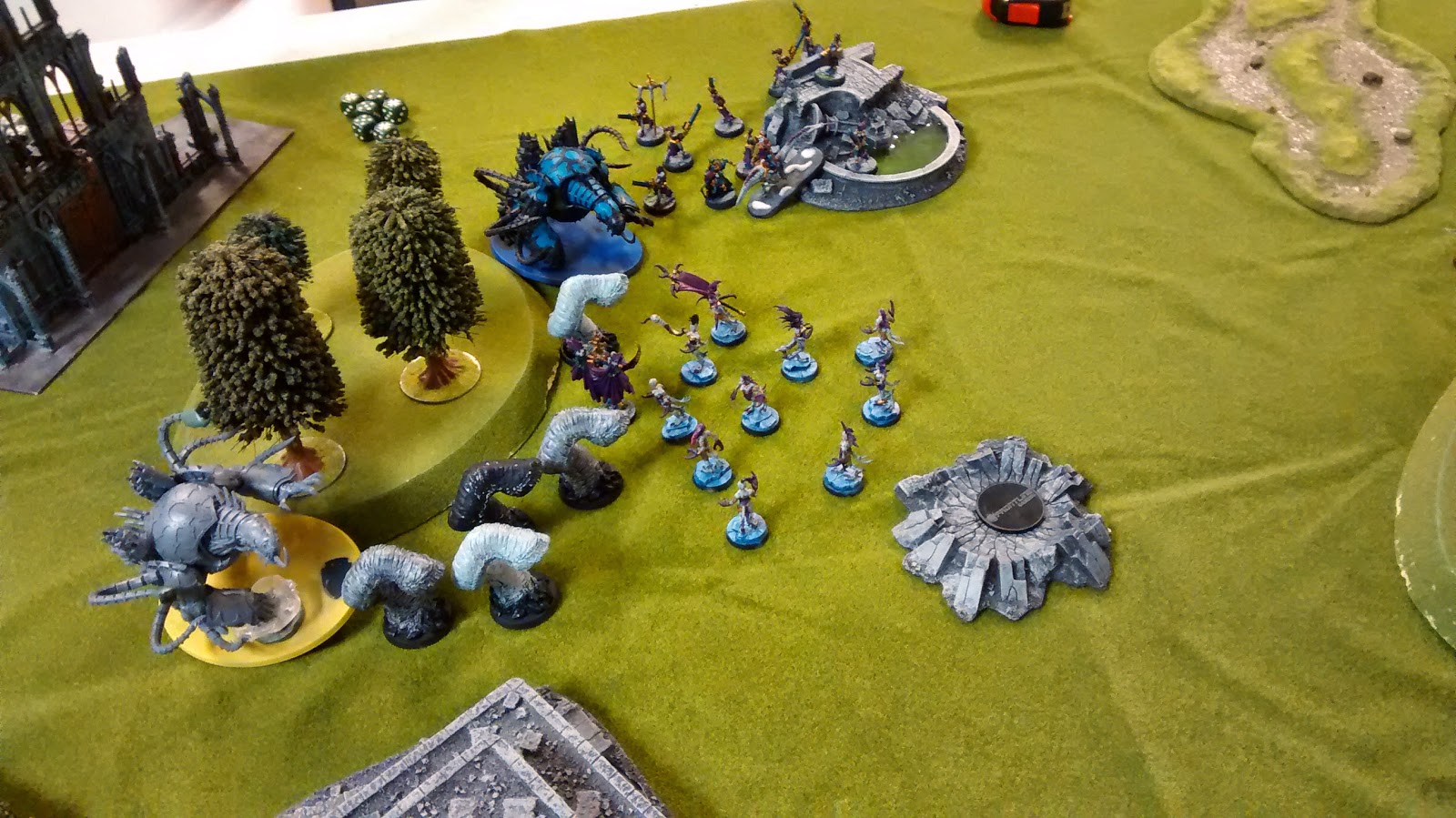 I turbo boost forward with Screamers and setup a screen for the Hounds and Daemonettes with the Screamers.  I am holding back here a bit until my outflankers arrive and so I can hit with everything at once.  I manage to summon a Nurgle herald with Grimoire who promptly mishaps and gets stuck in the corner of the board.  Luckily the Scribes summon another herald (Flamer) which grabs Mastery 2 and Cursed Earth as a power.

Also shown are the two Obliterators that came for a visit to wipe the Herald on the next turn. 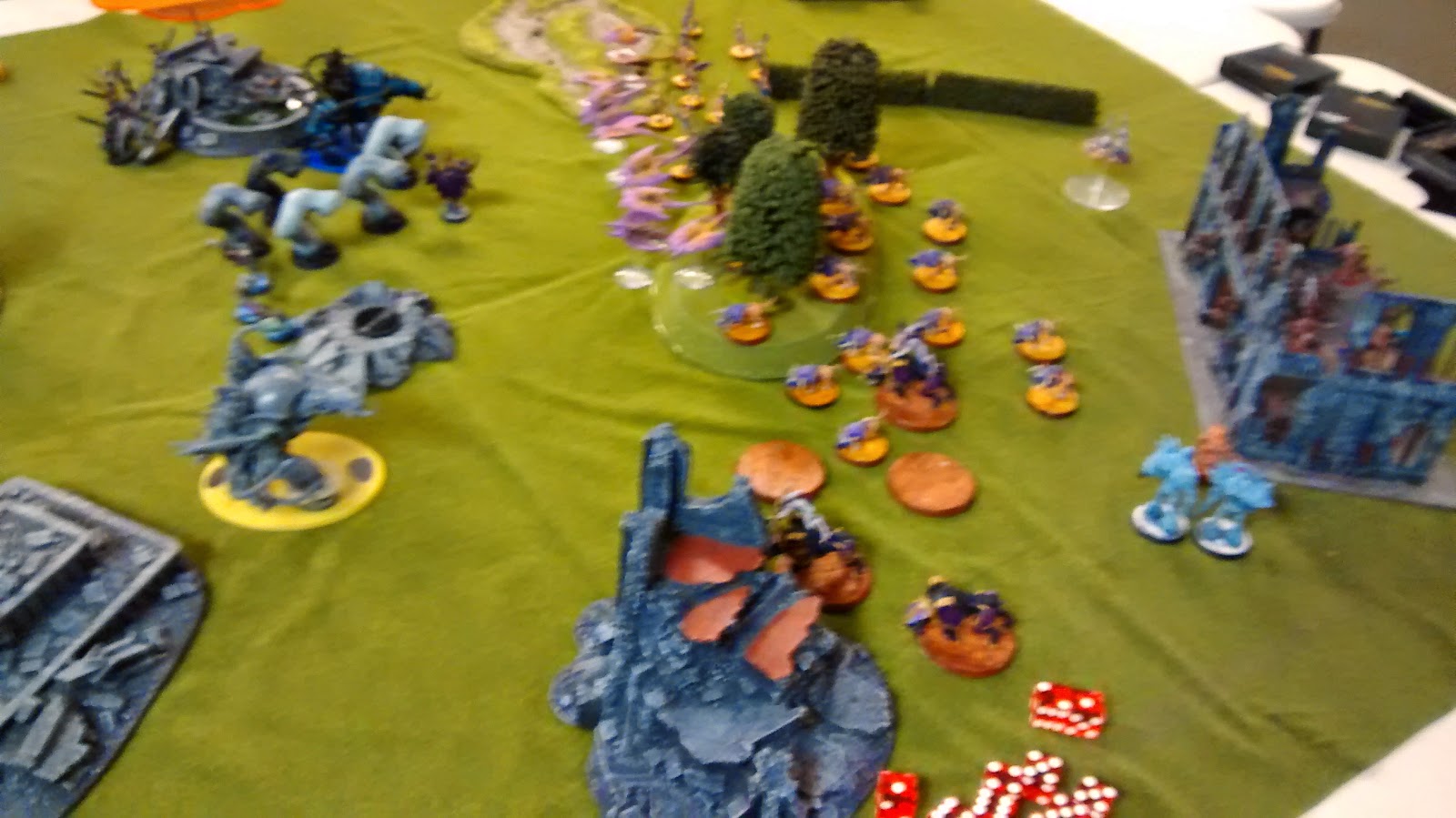 My Warp Storm gets The Dark Prince Thirsts and I am hoping to kill a Maulerfiend with it - unfortunately I do not hit any units.

Turn 2
The Cursed Earth herald survives two twin linked flamer shots and I eat an assault from the Spawn on the Screamers and the Maulerfiend on the Daemonettes.  The other Maulerfiend does not manage to make the 10" assault into the Crushers.  The Spawn are complete whiff city and we actually push combat.  A Grimoire wielding Slaanesh Herald comes in and gets to hang out because I have no shooting. 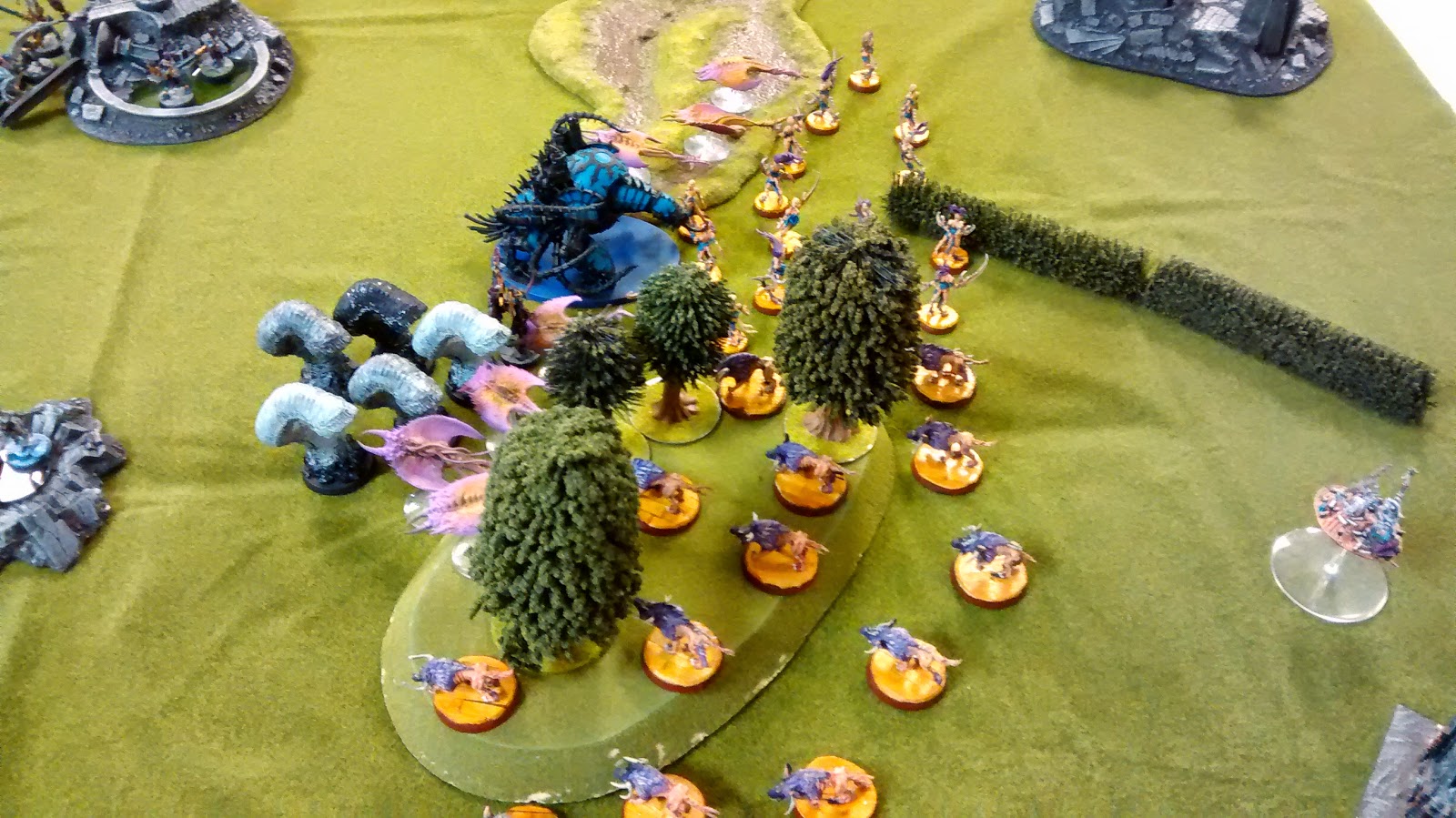 I get the Fiends and Seekers in, they come in on opposite sides, the Fiends come in to counter the Possessed while the Seekers move to screen out the Maulerfiend.  I grab another herald of Dark Sacrifice and pull off Cursed Earth plus a Warp Storm of 10 to get 3+ saves.

The Flesh Hounds counter assault and wipe the entire Spawn unit/Lord.  This is the first time I think I have had an unscathed unit of 18 get the charge.  The Crushers charge the Obliterators, but they have a 3++ now due to my Cursed Earth/Warp Storm....oops!  The Daemonette/Maulerfiend combat continues with a slap fight and nearly no damage.


Turn 3
The Chosen roll up a 3++ power which goes to a 2++ and they charge into the hounds.  The second maulerfiend hits the Seekers and I take some random shots from the Noise Marines - for the most part they instant kill a unit here or there but my saves are good and the scatter is really really bad. 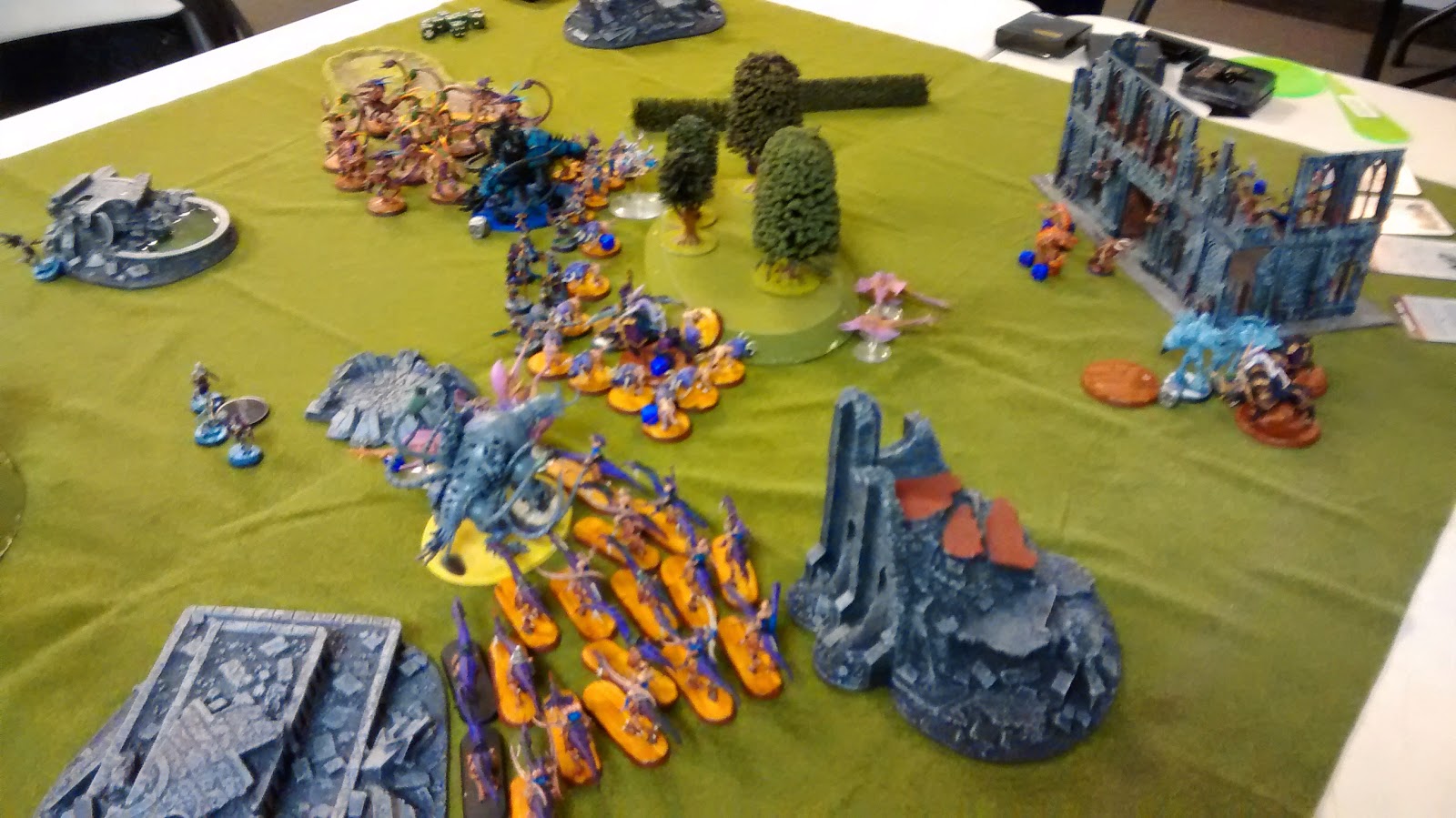 In combat I lose a few models in the Hound unit and more to instability, but I manage to break the Obliterator with a single would.  It escapes due to its Mark of Slaanesh!  In  a desperation move, the Sorcerer brings in a Slaanesh Herald to hope for Invisibility for the Chosen (who are holding up 500+ points of models)  Unfortunately, he rolls Hallucination and fails to roll the 5/6 needed to make me nuke my own Herald, instead getting the worst result of a 1/2. 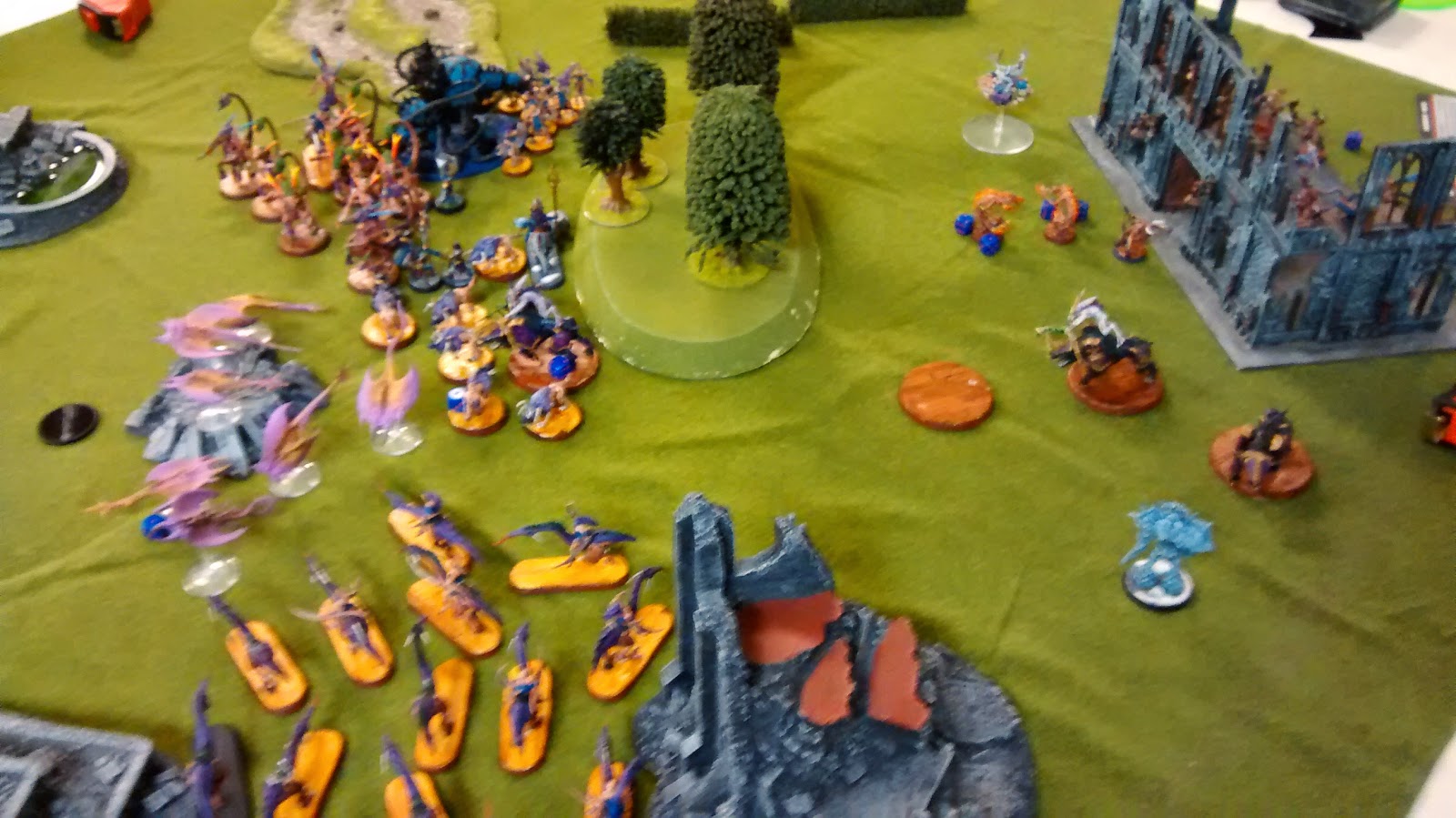 Between the Hounds and Fiends the Chosen are wiped when they 'only' have a 3+ save this turn.  It would not have mattered though because almost every one of the 7 failed saves was on a 1.  The Seekers show the Daemonettes how it is done and eat the Maulerfiend, which also fails every one of its saved while the Crushers kill the Obliterator who cannot make a save.

My Screamers are in range of the Noise Marines (I summoned another 3), but their flybys killed off the last 3 Daemonettes holding the Relic - who also failed all their saves!  A terrible turn for my opponent.

I could grab the relic and run, but charge into his gunline instead!  The Maulerfiend is STILL in combat with Daemonettes who have been losing models and attacks due to the whips each turn.  They FINALLY rend it out at the end of Turn 6.  With the prospect of so many units bearing down buttressed by Cursed Earth and a slow Nurgle herald that can now Grimoire things we call the game. 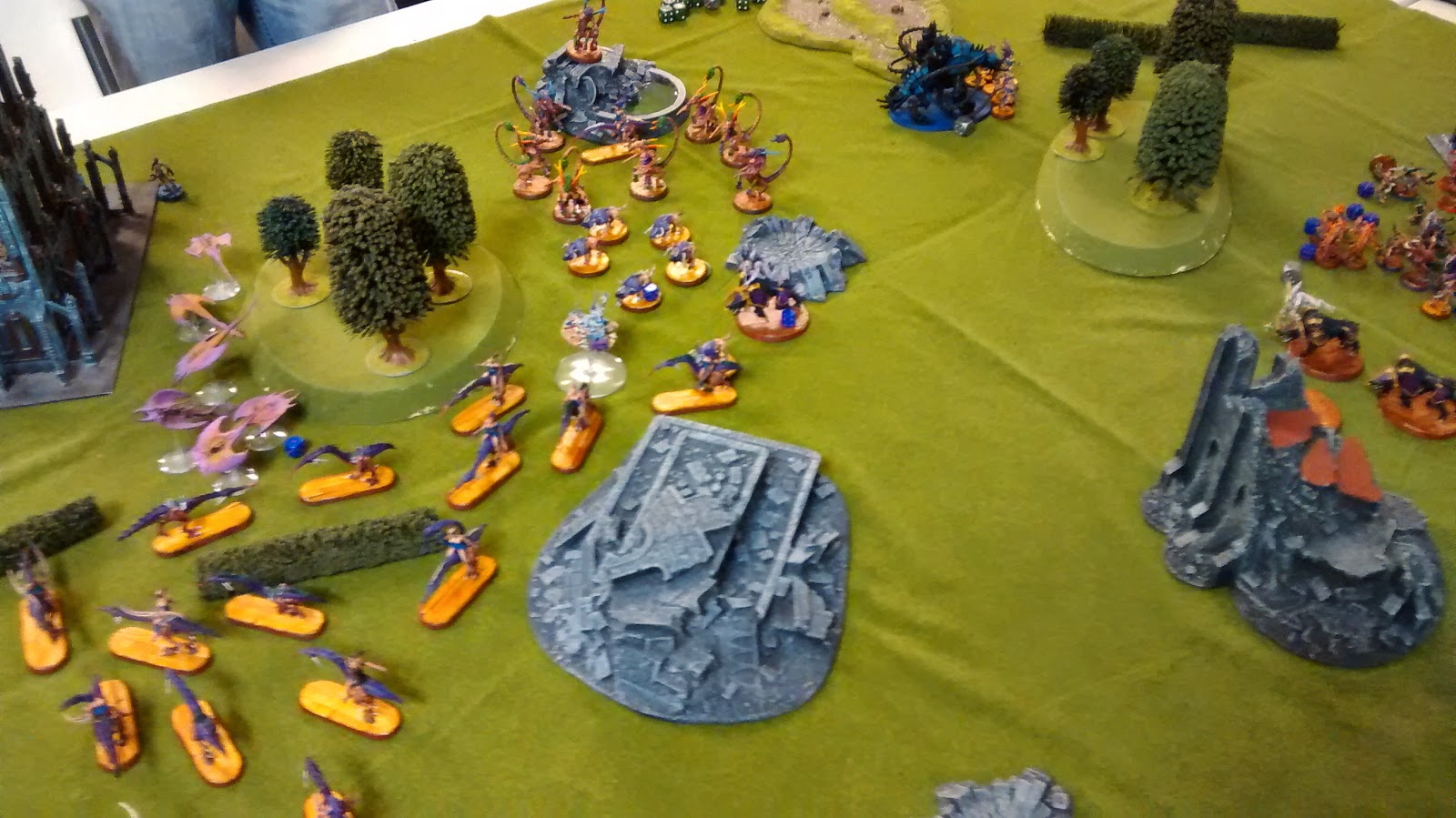 Game Summary
This game was much closer than this final picture shows.  A few really rough assaults for the Crimson Slaughter.  The Chosen rolled Shrouding when they needed a 3++ or to be Beasts, then they whiffed when they got the charge a turn too late.  Even a Maulerfiend into the Crushers would have let the Obliterators work over additional units.

As for this list, I like the diversity of it and I like the way it plays.  The Screamers are hugely fun with how fast they are and there is enough T4 multiwound units to take some instant death shots.  My primary concern though is this game definitely took more than the typical 2.5 hours allowed for a tournament which could present a problem.  Especially for assault armies that tend to get stronger as the game goes on.  The other downside is I have a few more models to paint - Screamers are unfinished, Seekers need repairs, crushers need to be detailed.  That means two weeks of intense painting (or at least more focused painting) to get things ready.  At least everything has bases now - some without models attached.
at 8:00 AM