Posted by Calypso2ts
This weekend was the Millennium invitational, an event held at Millennium Games every December.  It is a great event, with the participants qualifying through the normal tournaments at Millennium Games over the year and all the prize support being on the house.  Normally I play my Da Boyz GT army at the event, but this year I did not attend Da Boyz and changed things up with a Highlander style list.  I had intended to bring these fellows... 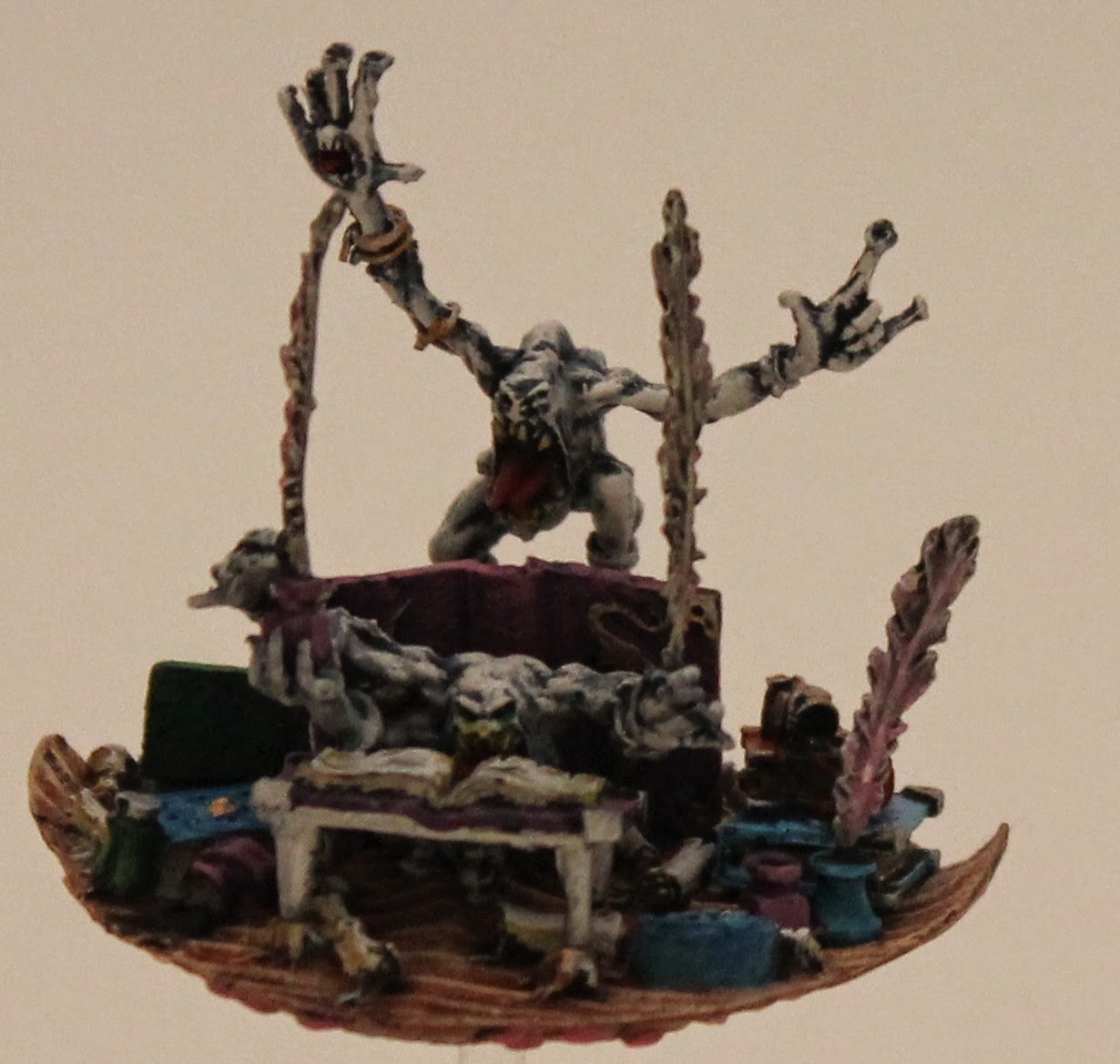 ...unfortunately they did not make the cut.

They also represented the only unit I have painted in the last 3 months (much to my chagrin).  I am pretty happy with the way they came out, they still feel Blue Scribey but fit into the overall theme of my army - flesh tones for the most part with bright spots of puple, blue and green.  I wanted to make the riders Albino to separate them a bit from their disc, which matches the look of my screamers as well.  A few more pictures of the scribes before I talk tournament. 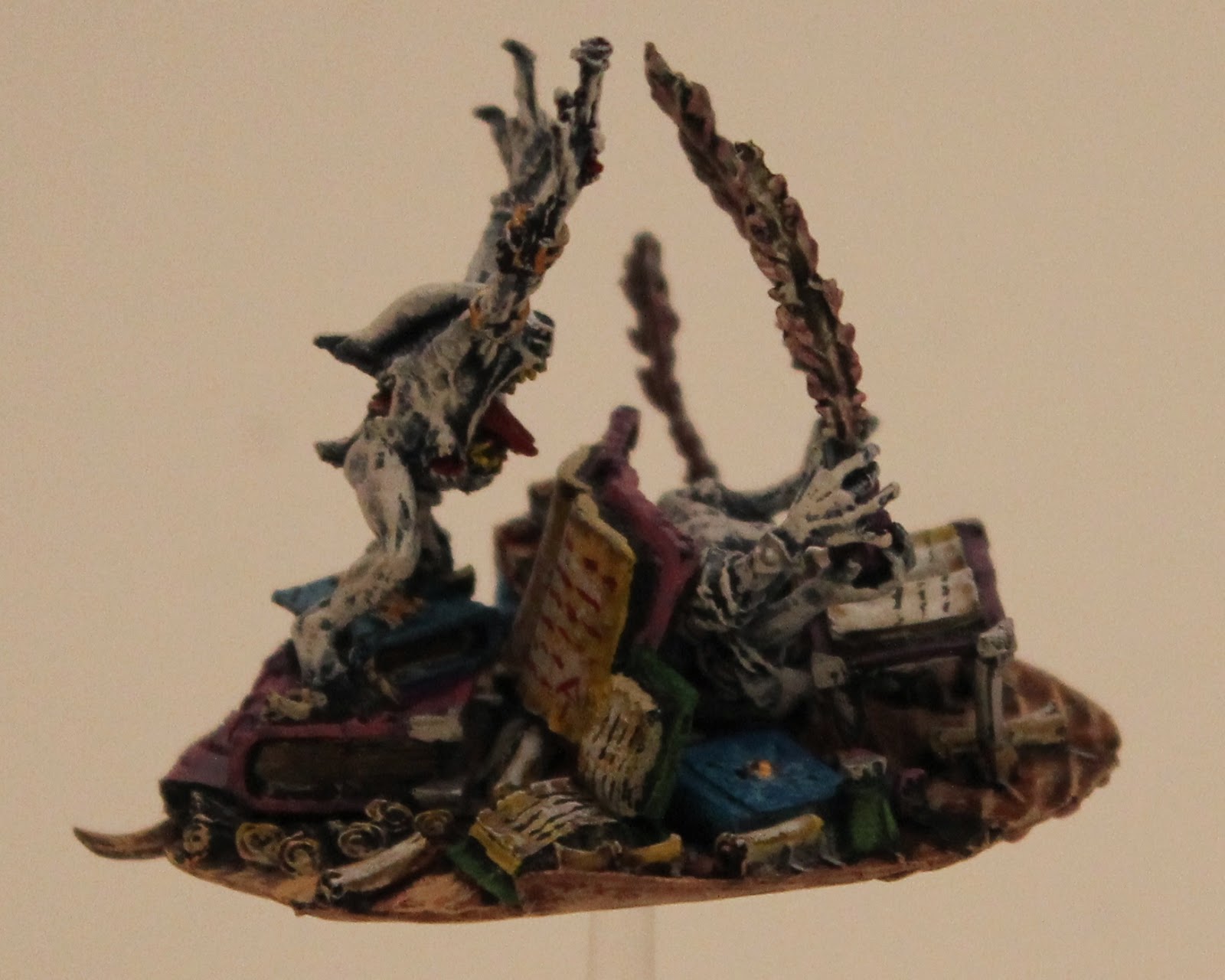 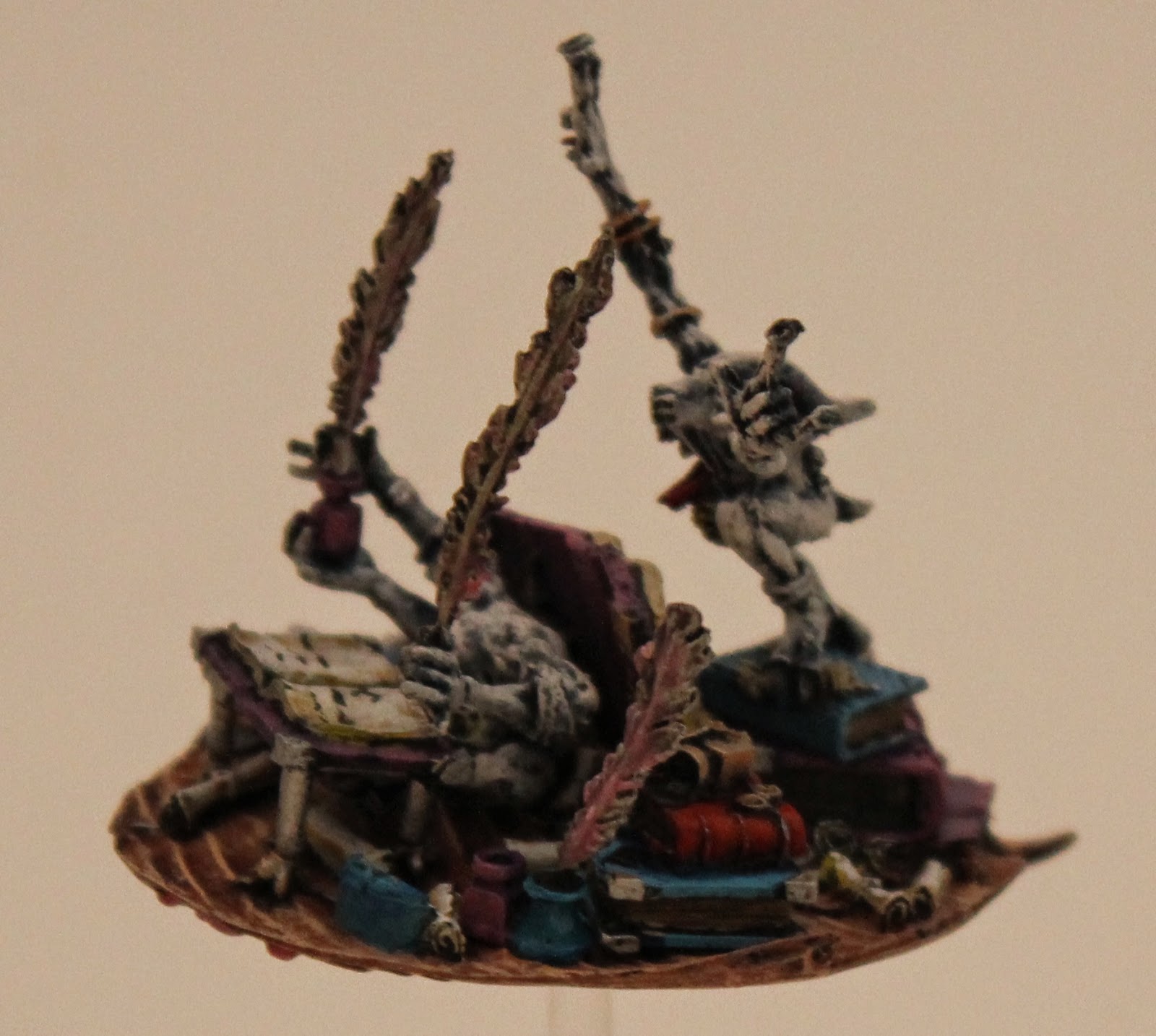 Tools of the trade - extra quills and ink. 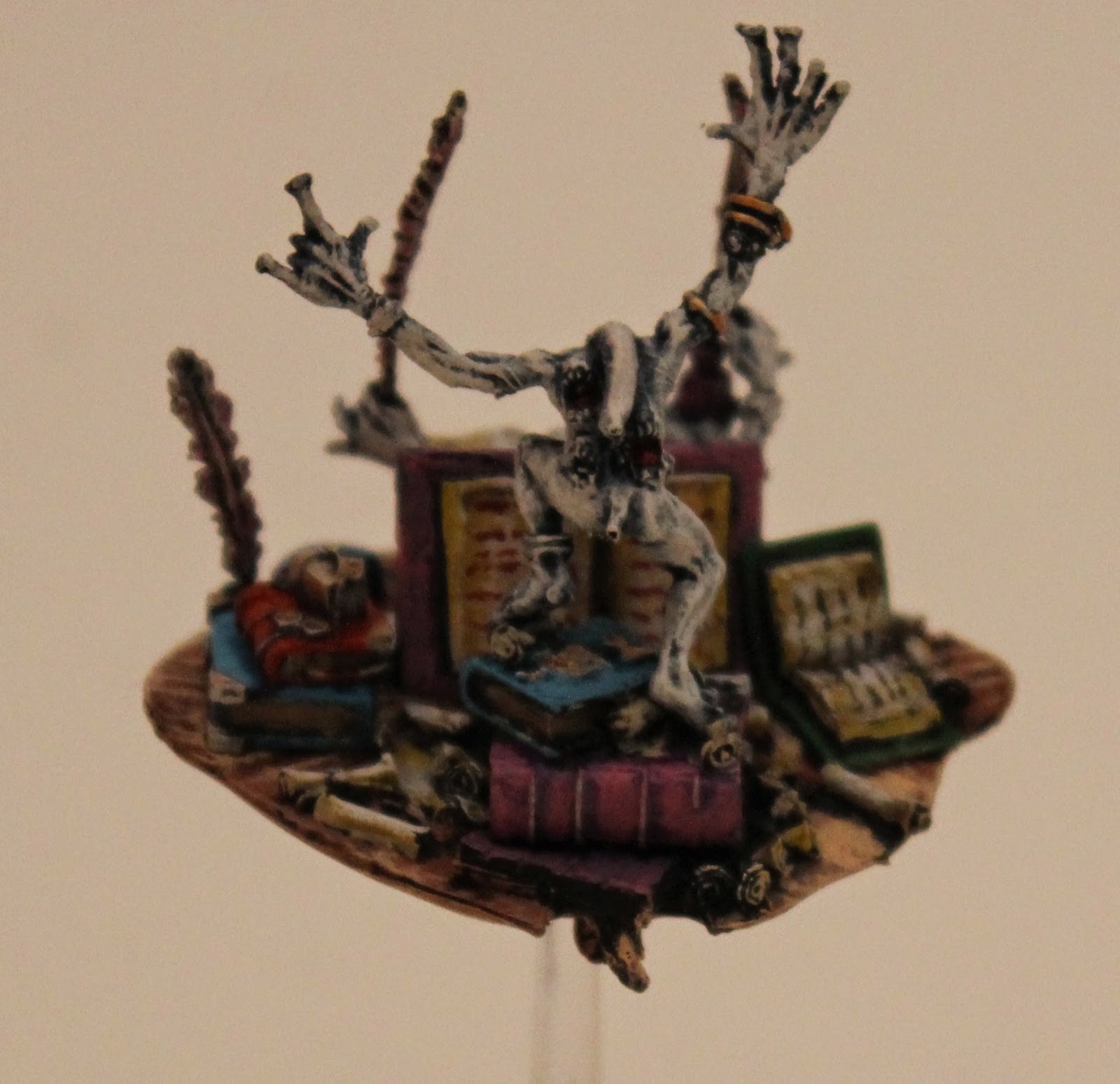 Back mouths are the new black.

In spite of looking forward to the invitational, my day was interrupted after the first round by an automobile malfunction.  I had to help my stranded spouse and two kids, which made me just late for round 2.  Round 3 was the worst game of 40k I have played in the last 3 years (maybe more).  It was against Koszka, who you cannot afford to make mistakes against - especially with an infantry blob bearing Yarrick, Cypher, Primaris and Priest with an Imperial Knight for backup.

Back to the first game, I played a Nemesis Strike Force with 2 Dreadknights, 2 units of 5 Terminators, Librarian and Interceptors.  I had brought Full strength units of Hounds, Fiends, Screamers, 4x Crushers, a Khorne Herald and a Keeper of Secrets.

I ate the Alpha strike, but the game really turned when I was able to get an Instant Death hit through on a Dreadknight caught in a multiple combat with the Keeper.  With both knights down I was able to pick apart the remaining terminators one at a time.  The automobile problem hit in the middle of the game, so I only have a few pictures of the result.

Turn 1 the terminators drop in to shoot. 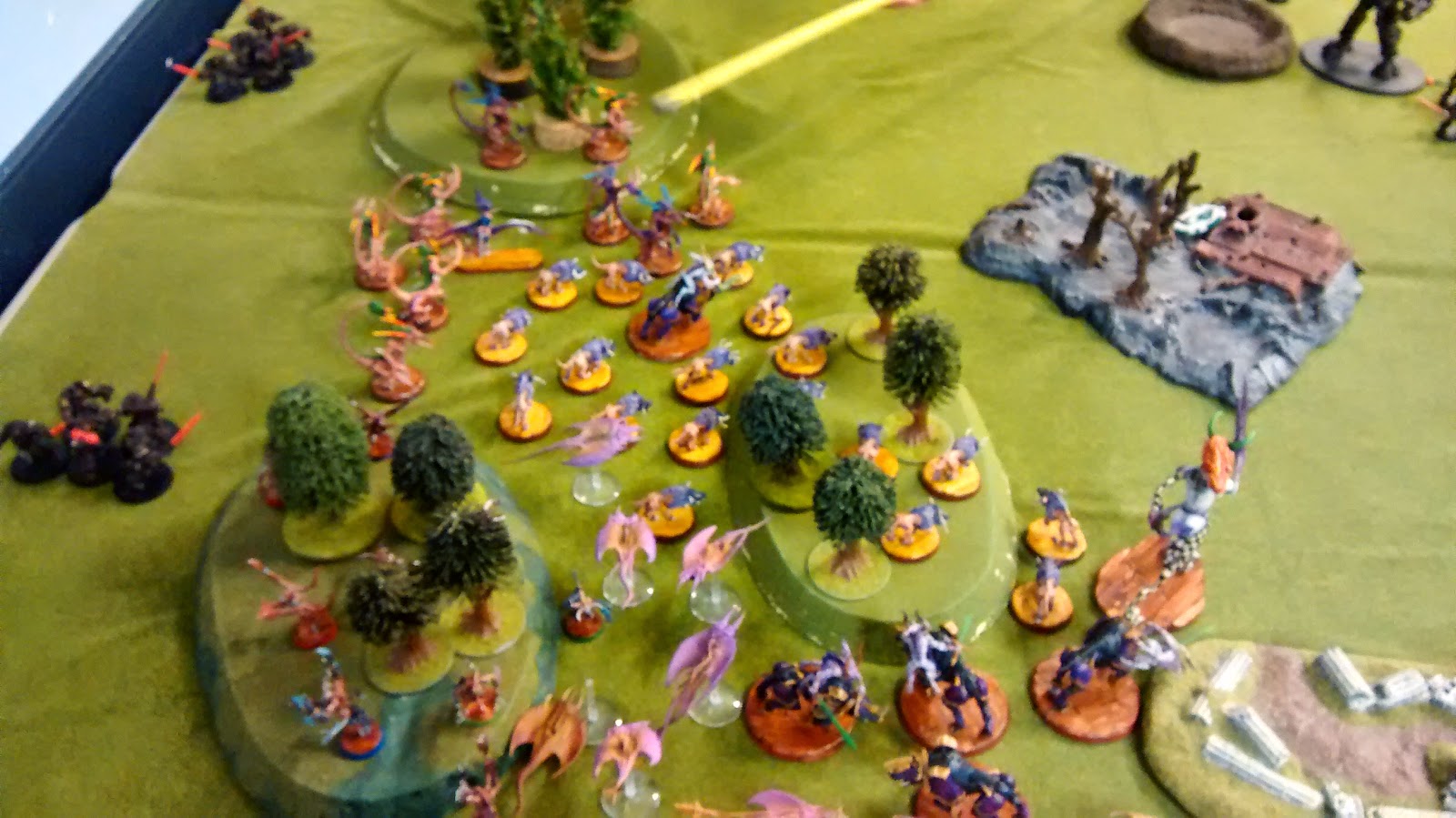 The Keeper assaults into a dreadknight, 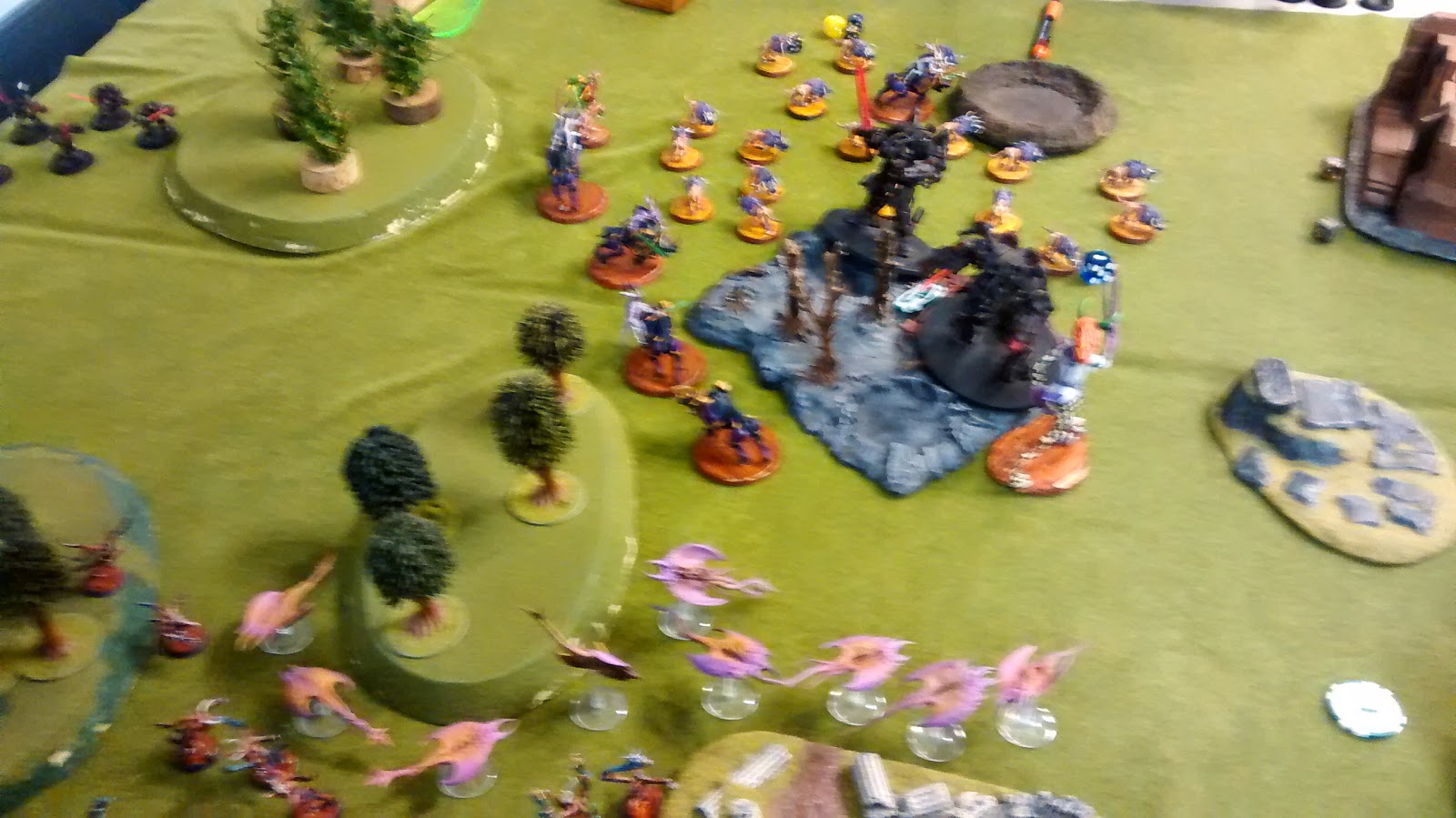 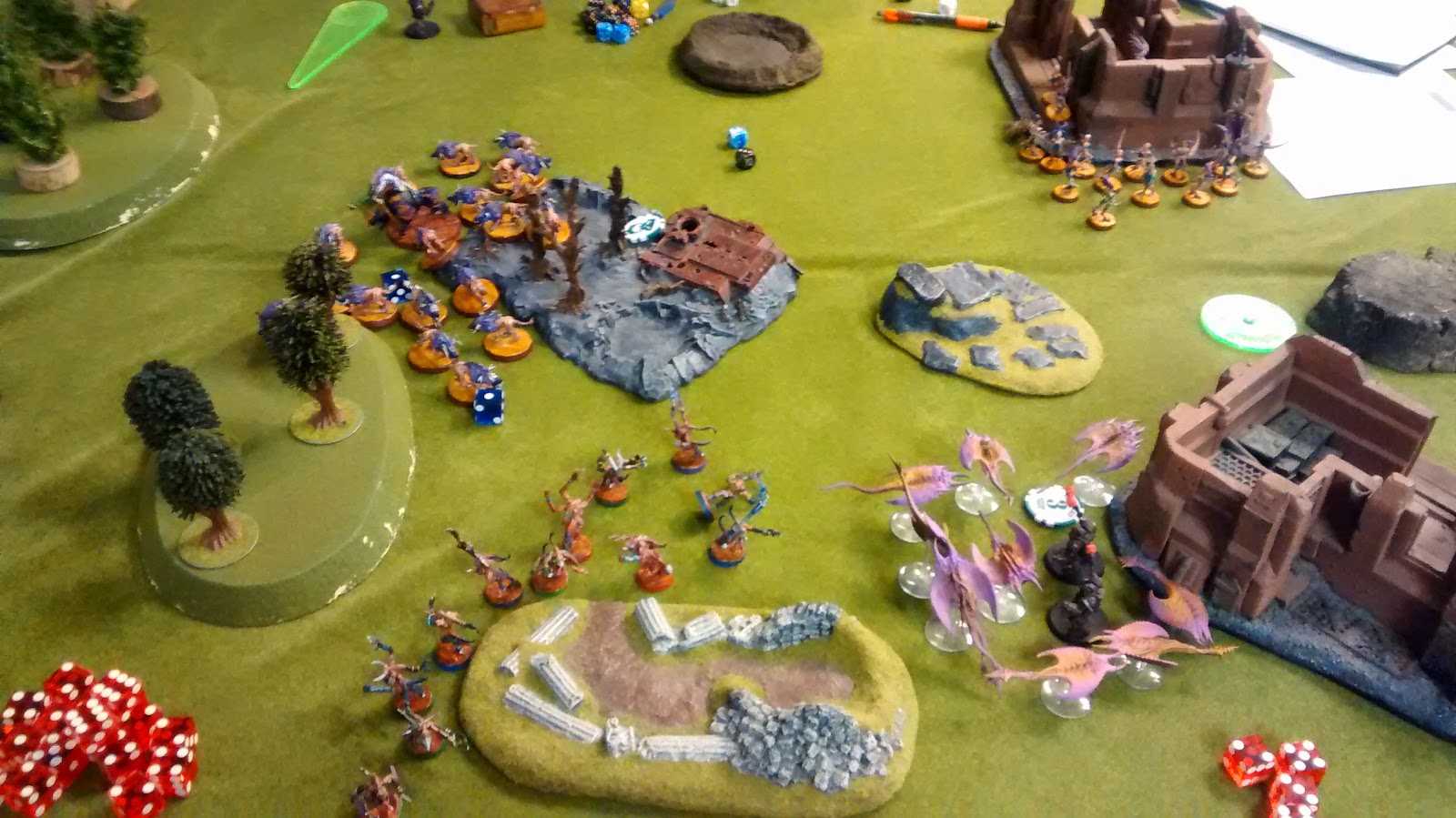 Looking back at this game, I realize that I made a ton of rules mistakes in this one.  It might be I was off today - I do not think it should have influenced the outcome, but it is hard to predict.  My apologies to the GK player because I:

1) Forgot Sanctuary makes terrain Dangerous for Daemons.  This should have forced terrain tests on my Crushers and put them at I 1 against force weapon activated Interceptors (though they were at I1 from the Fiend that hit them), put my keeper at I1.  In the end though, the Khorne herald that killed that Dreadknight was charging into an existing combat so the terrain did not matter.

2) Missed a strength 6 shot that I think should have instant killed a Herald of Slaanesh - which would have knocked 1 more wound of my Fiend.  I blew the herald up casting Invisibility on the Hounds, which should not have gone off.  That is okay because I actually forgot about it during assault and the Hounds were not the right target to shoot the next turn anyway nor to assault.

Congratulations to the overall winner, who brought 1 of each Aspect (including Banshees and Scorpions) and took the tournament with an Eldar army composed of only 2x Wave Serpents.  Next week some new year resolutions and a first shot at CSM for a combat patrol mission in the new year.
at 7:00 AM