The end of a relationship? 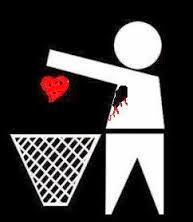 The past few weeks have been pretty crazy in my life and I feel I need to share all of this with you. I've been blogging for a little over a year and a half with you and because I feel that I have some kind of connection with you readers I feel that I can unload this burden with you. Lately I've started straying from the love of my life. For over the past 10 years, through thick and thin I have always stuck by my love but recently I've started to get that feeling that we no longer connect. Over the past couple of years she has become more and more closed up and doesn't want to share her thoughts with me. Now she rarely talks to me, except when she wants me to spend my money on her. To add further insult she will say one thing in one instant and then on the drop of a dime she invalidates her previous comments and says something completely different. It's like your first love in high school, where you think that this is the one that you will love for the rest of your life and that nothing will tear you apart. But like all things, people change over time and one day you realize that the person you thought you knew is no longer that person.

Recently, a friend of mine introduced me to someone else, someone who offered me a different perspective on life and has given me a new outlook. At first it was just a quick and casual introduction but I quickly found myself looking her up and wanting to spend more time with her. I've been making excuses to stay out after work and on the occasional weekend just to be with her. Is this the one whom I was meant to be or is she really just an escape, an excuse, to strike back at my true love for shutting me out?

So dear reader, what would you do in this situation? I know that many of you have probably been down this same path and have felt the exact same thing that I am feeling now. Do I leave Games Workshop and make a clean break for Warmachine or do I try to balance both in my life and hope that they do not find out about each other. Wait, what... did you think I was talking about my wife? Oh she may take my money and change her mind on a dime but I could never leave her, I couldn't afford the alimony ;)

Recently, a buddy of mine started playing Hordes at the local store. I was over at his place three weekends ago and we spent a good two hours going over his army and the mechanics of the game. I left that night with some quick starter rules and spent the next few hours pouring over the Privateer website, looking at the models. In the next few days I played a demo at the store and soon enough my son and I walked away with two battle boxes. He picked up the Skorne and I picked up the Protectorates of Menoth. over the past two weeks we have played 5-6 games now and we are having a blast. The models may not be as nice as GW's kits but being able to play a game straight out of the box with very little rules reading makes for a nice change of pace.


Our local store is starting a Journeymans league next week and we plan on attending and learning more about the game and the strength and weaknesses of our two armies. I've been itching to start painting the models but according to the league rules you cannot start painting until the league starts. We also bought the army books for each of our factions so that we can start learning about what other models to add to our forces over time. The fluff, while not as fleshed out as GW's, it is still interesting. One other thing that I like about Privateer Press is their magazine, No Quarter. It is basically formatted like White Dwarf used to be back in the day. In the most recent issue I picked up it has plenty of fluff and background stories, a strategy guide for starting a Menoth army, a conversion guide, terrain building guide and lore and history for someone who wants to play a campaign or role playing game out of the lore. While I am nowhere near that stage yet, the lore and backstory were well fleshed out and made me more interested in the warmachine/hoardes fluff.

So, does this mean I am dropping 40k and Fantasy? No, but in the past year, almost all of my games played have been in tournaments and to be honest, the tournament scene is getting ugly ever since GW opened the flood gates to what players can bring to a game. I'd rather get in more friendly games outside of the events but its getting harder and harder to find the time to set up a day to play a game, where as warmachine or x-wing take, at most and hour or so to play. This way I can get in a couple of friendly games with my son or my friends rather than devoting a day to finding someone to play 40k on the off weekend. This will be an interesting journey over the next couple of months as I am attending Adepticon for the first time next year and I'll be participating in the 40k team event but I think I will also be spending some time at the x-wing and possibly the warmachine tables as well.

I know that this blog has always been about 40k so I will ask you readers, do you want to see me blog about my journey with warmachine over the next few months as I learn the game, or stick with my 40k and Fantasy projects? Chances are that I will be spending more time painting my army, playing games and eventually building terrain that is more themed to warmachine. For now I have been playing on my swamp board and it really looks cool but as I learn more about the Warmhoardes lore I may get the itch to start building terrain to reflect that world. Lastly, for any of you who do play warmachine or Hoardes, do you have any advice for a budding Kreoss/Menoth player like myself or my son's Morgul themed skorne army? I'd love to hear your take on each faction and your overall thoughts of the game.
at 8:00 AM