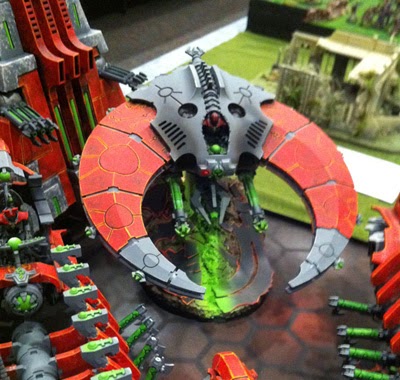 This past weekend the Beef and Wing gaming club held their first annual Beef and Wing Brawl in Buffalo NY. The format for the event was 1250 points played over 4 rounds. Forge World and 30k armies were allowed. Lords of War, Apocalypse, and Escalation were not allowed. All games were played on 4x4 tables due to the lower point levels and each table was comprised of custom terrain. The event was held in a banquet hall at a indoor Golfing Range complex complete with a full bar and restaurant and as part of the entry fee the Beef and Wing club included free pizza and wings and an open bar for 2 hours. So how did the first time event fare? Read below to find out more.

As I stated in the introduction, the event was held in a banquet hall of an indoor gold complex right off of highway 290 in Buffalo so access to the event was quick and easy to find. We had a nice sized room all to ourselves away from the general public and right down a short hallway to the restaurant and bar. Since the games were being played on 4x4 tables, space was not an issue and at no time did I feel overcrowded. Here are some quick pictures of the gaming hall. 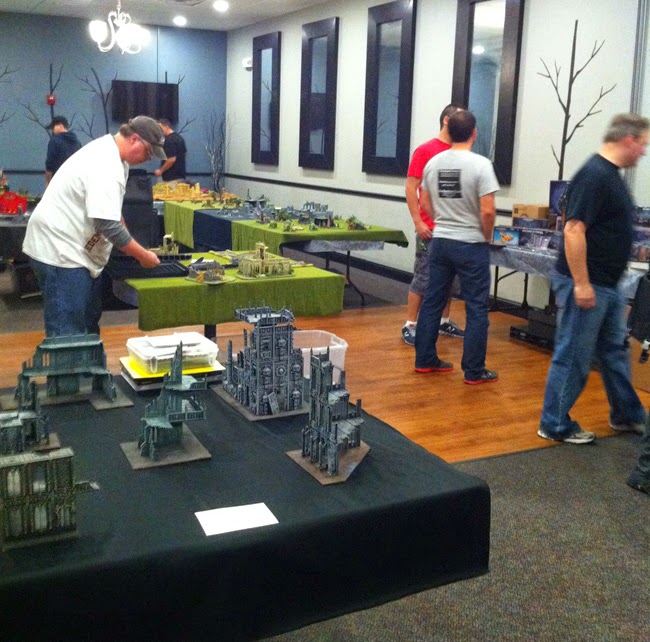 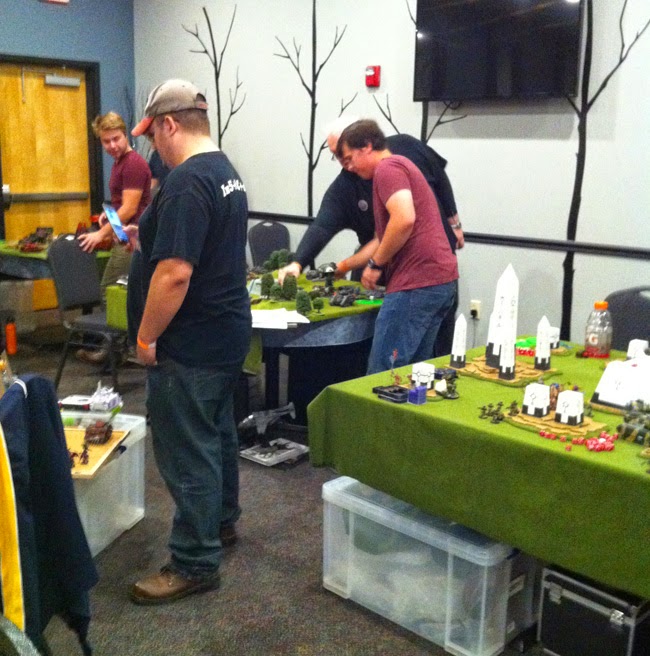 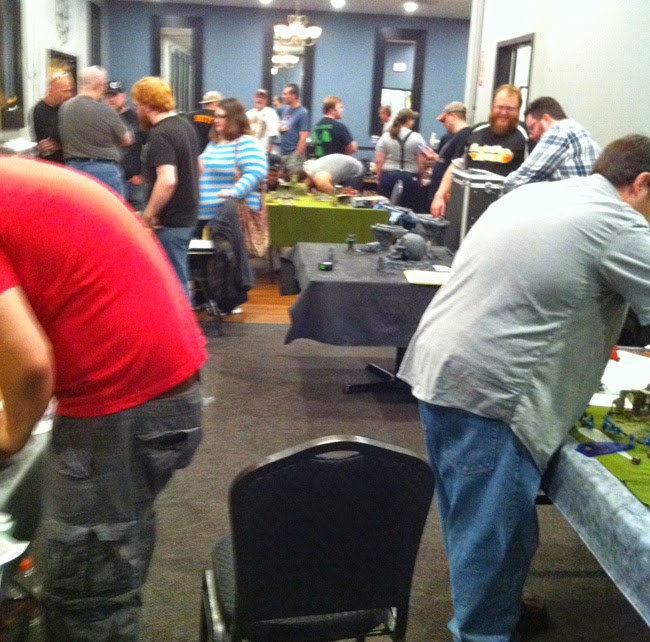 
All of the terrain at the event was provided by myself and Chris Courtney, another player from Rochester. All tables were pretty much populated with lots of terrain of various height to provide plenty blocking line of sight to both players. Overall everyone had positive things to say about the terrain. 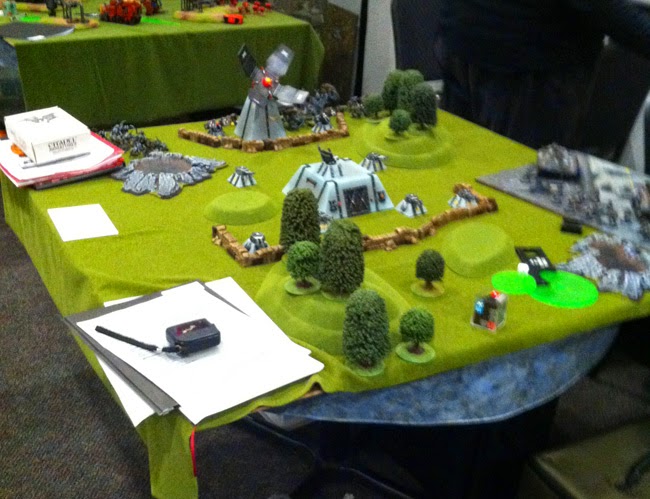 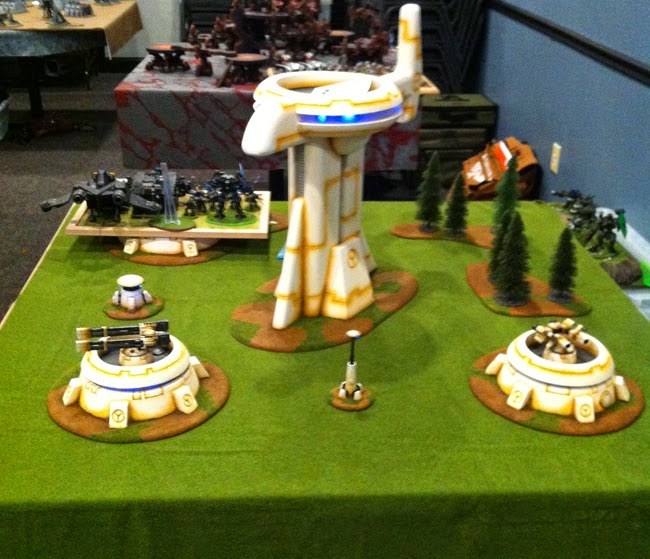 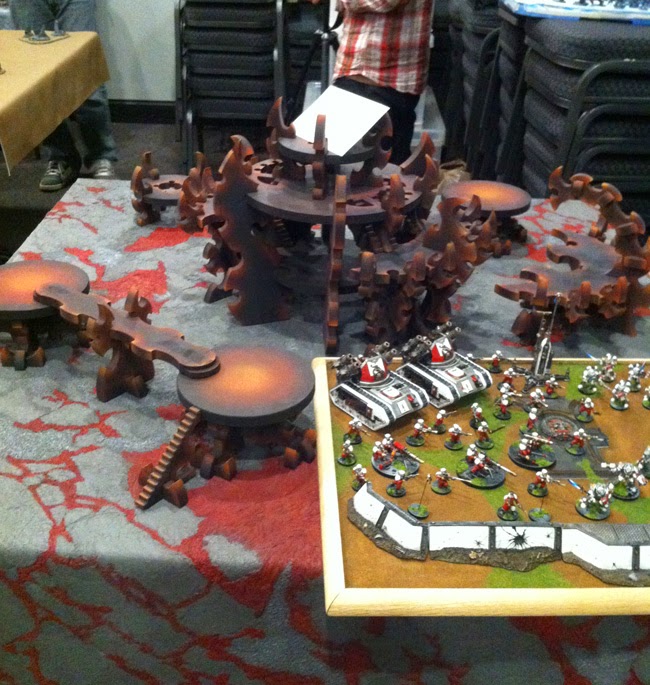 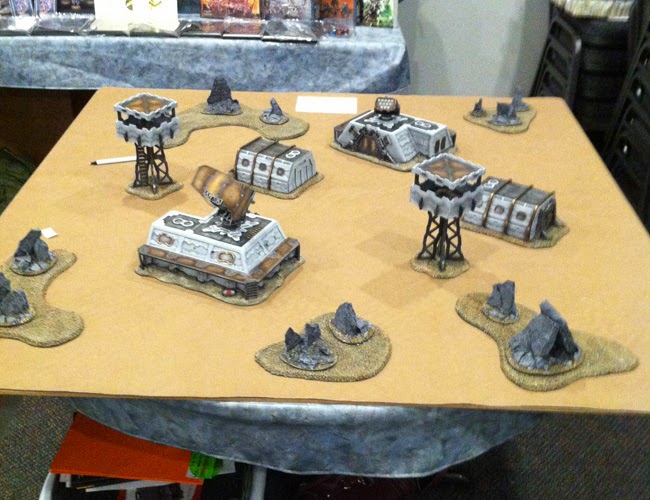 There was a wide variety of armies present and even a couple of 30k armies made an appearance. The only armies I did not see at the event were Dark Eldar and Sisters of Battle. The Beef and Wing club has been promoting the painting aspect of the hobby to the community for the past year and by the looks of it their work has paid off. Pretty much all of the armies were fully painted and there were many cool looking conversions in many of the armies. Here are some pictures I took of a few of the armies before the event started.(Sorry to all the people I missed)

Each mission for the event was customized so that they followed a narrative theme rather than modified book missions. One thing that I really liked for these missions is that they removed the standard secondary objectives like First Blood, Slay the Warlord, and Line Breaker and replaced them with secondary missions that were related to the overall mission. Here are some pictures I took during random times throughout the day. 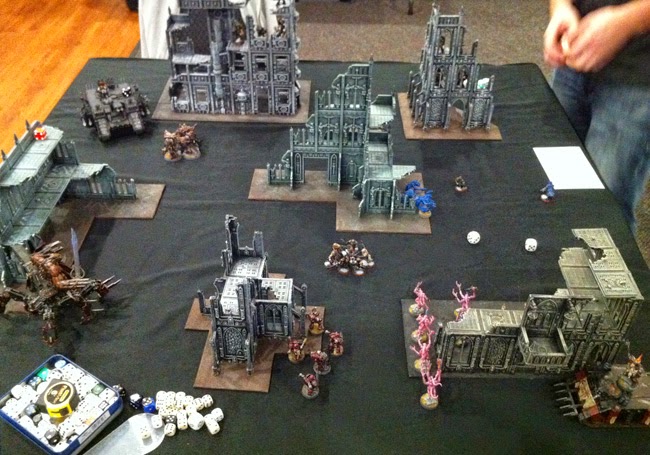 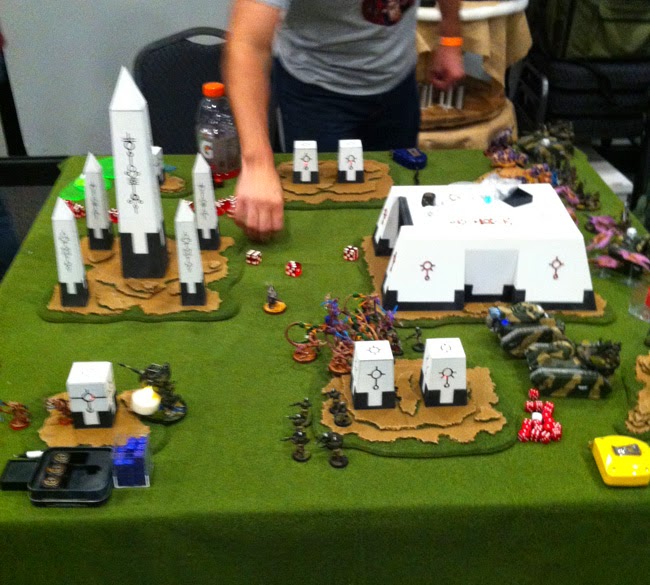 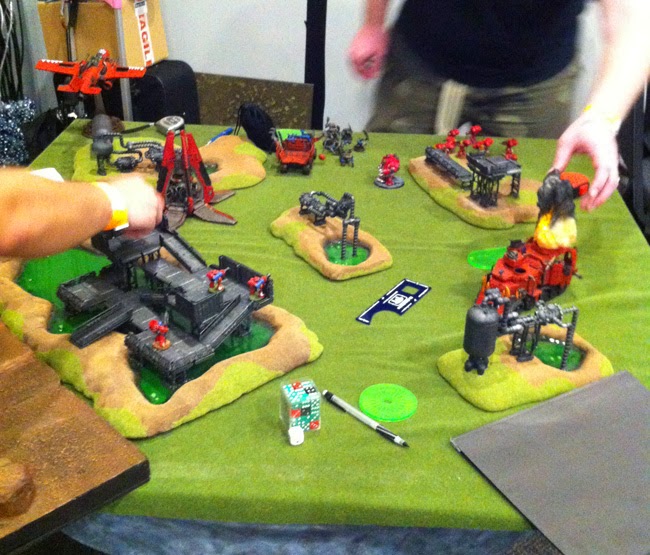 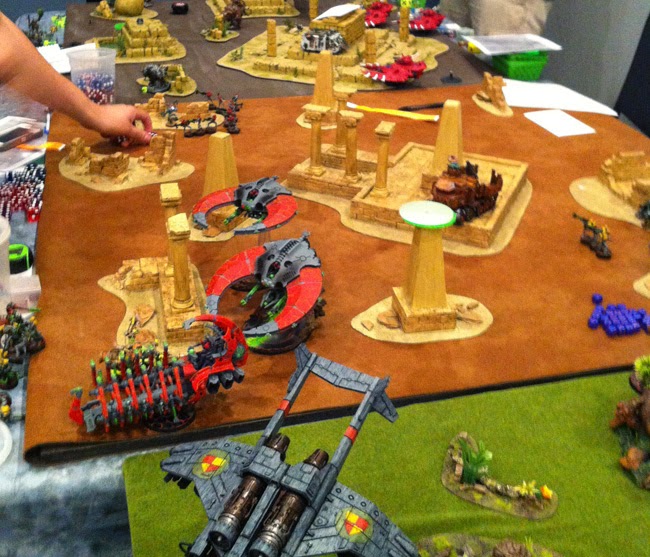 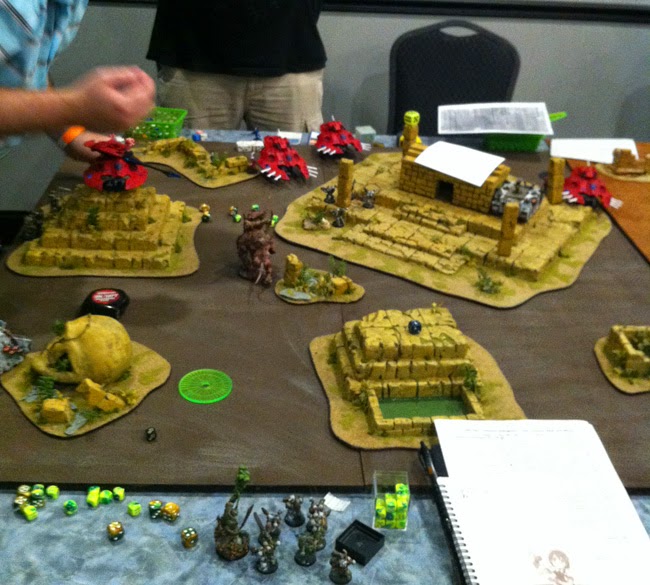 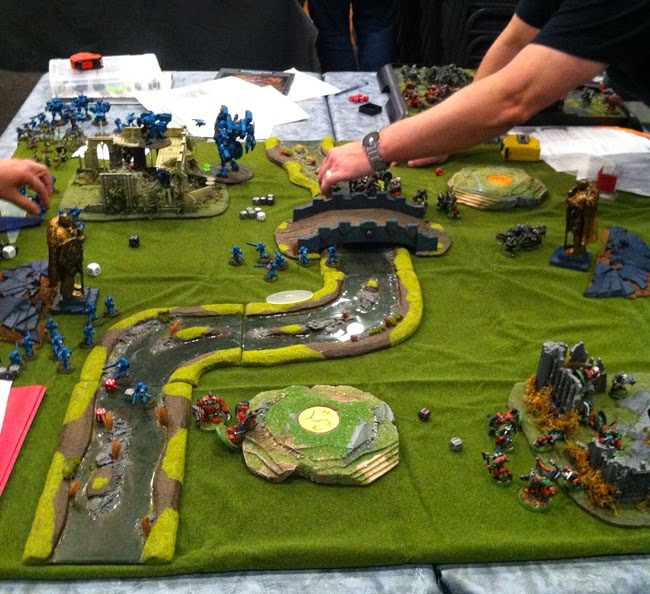 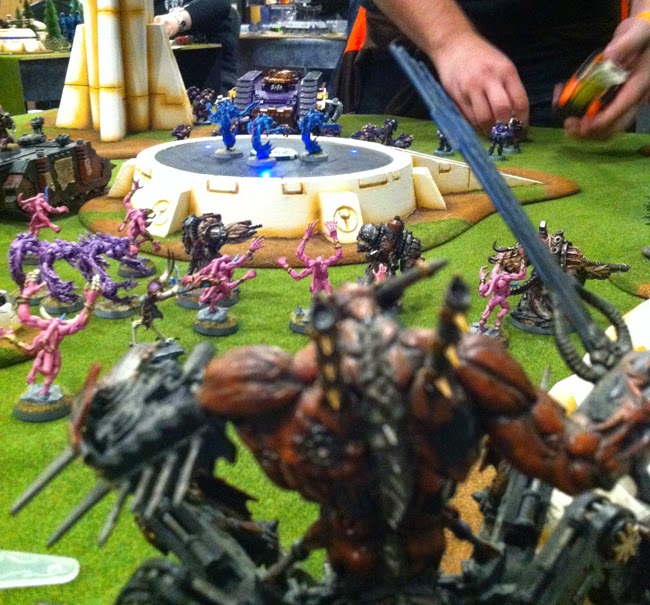 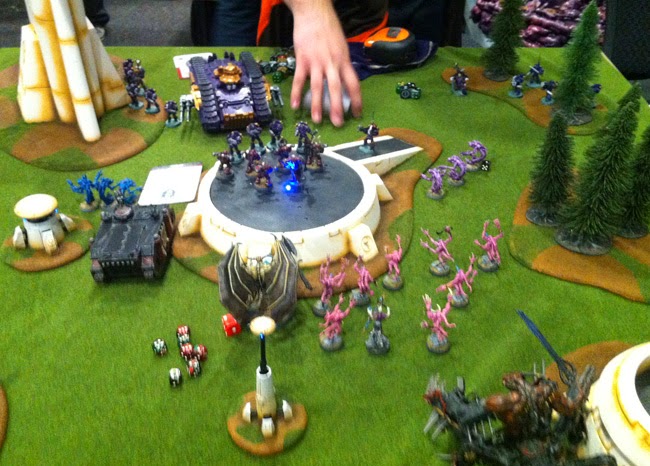 Prize support for this event was huge as many local vendors helped to contribute to the prize pool. A plaque and prizes were awarded for the following:
1st in total points (Hyv3Mind)
2nd in total points (Chris Courtney)
3rd in total points (Andy Ehnot)
Top general (battle points) - (Calypso2ts)
Best Appearance - (Grubnards) 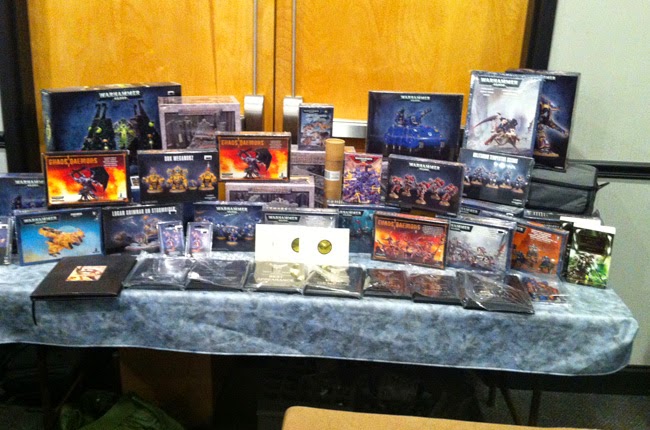 Once each winner received their plaques and picked a prize from the table, the staff then took turns randomly drawing names of the rest of the attendees and told them they could take a prize from the prize pool as well. This way everyone walked away from the event with a free prize. This was a huge and a great way for the Beef and Wing club to say thank you to everyone for coming out and supporting the event.

This was hands down one of the best events that I have attended in a long time. Games ran smoothly and time was never an issue. Providing free food and beverages during the lunch hours was an awesome gesture from the club as everyone seemed to enjoy the food and the open bar. They are already planning on making next years event bigger and better and I hope to see this event grow over the coming years. If you live in the Western NY area or from nearby areas of Pennsylvania, Ohio, or Canada, I would strongly recommend that you seriously consider adding this event to your schedule next year. You can follow Beef and Wing on their website: http://beefandwing.com/