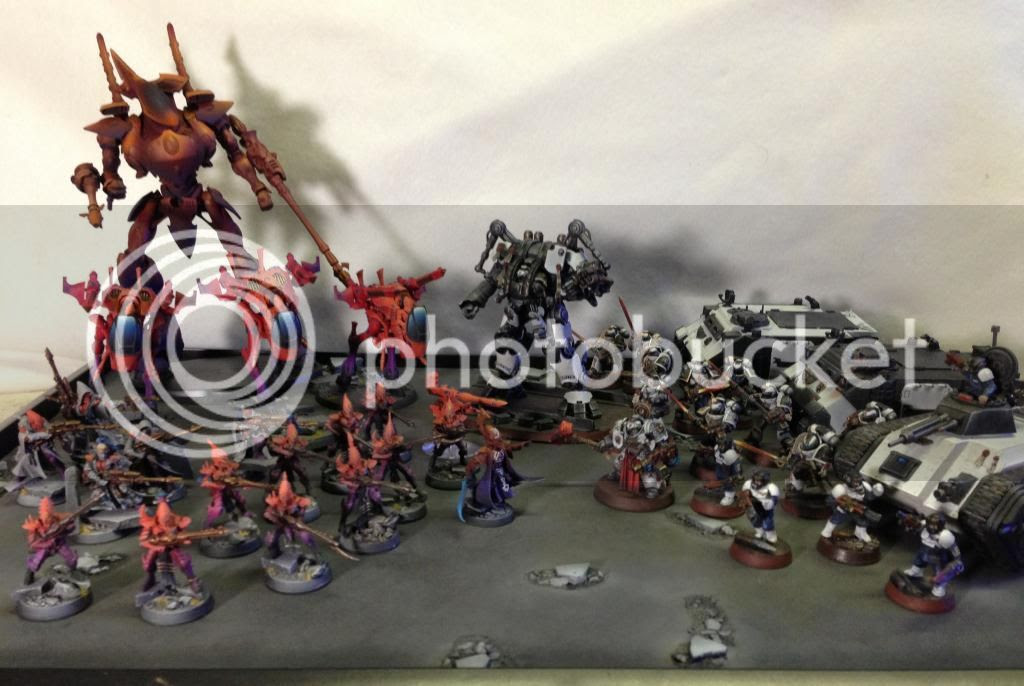 The July tournament at Millennium Games was a 1500pt format with judged painting and player ranked sportsmanship & comp.  The breakdown was 15/7/3 battle points for win/draw/loss with up to 15pts for painting and 15pts for sportsmanship/comp.  The new Eldar codex (and wraithknight in particular) was calling to me so I put together this list.  My goal was to use as many painted models as possible with no special characters or duplicates (cept 2 rhinos) to max my soft scores.  Game #1 can be found here.  Game #2 can be found here.

Game #3 was against Dave's IG.  I should have taken more close-ups, but Dave's army was a gorgeous rogue trader counts-as "Last Chancer's" army with more infantry conversions than I've ever seen on an individual basis.  The mission was Purge the Alien and Dawn of War deployment.  I believe we had night fight also.

I won the roll and opted for first turn. 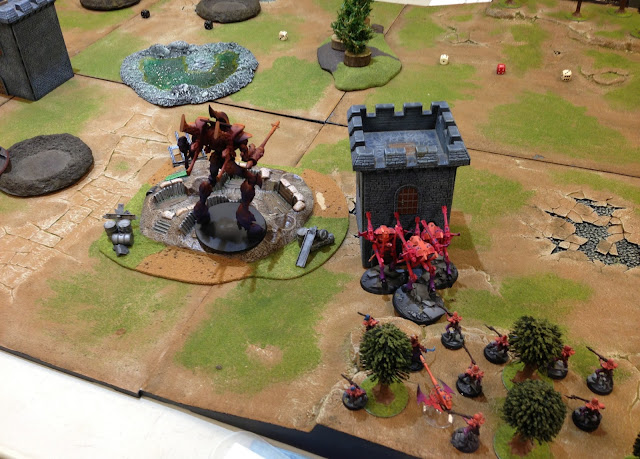 Despite having first turn, I deploy defensively because I always expect to be seized on.  Eldar hold center and right flank.  My farseer has joined guardians in the forest.  Rangers are outflanking. 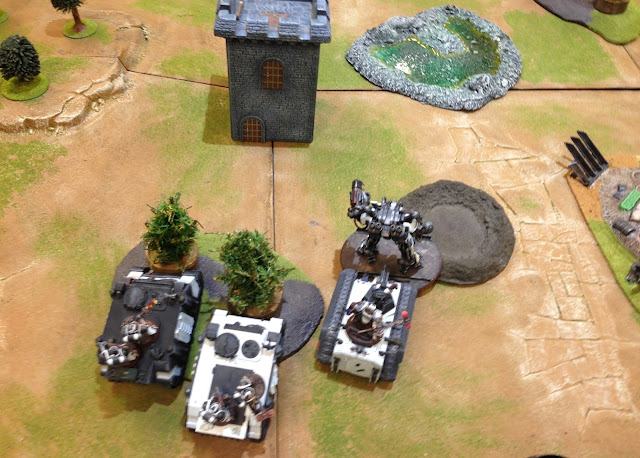 Grey knights are deployed on the left side using the forest and NDK as cover. 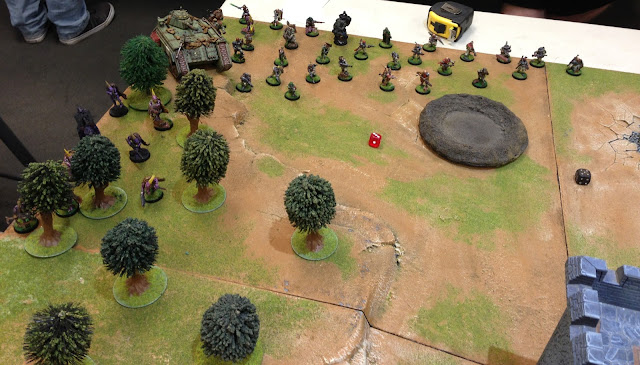 My opponent's CCS and primaris psyker are in the chimera alongside the 30 man blob.  The "orks" count as his heavy weapons teams.  The "kroot" count as Harker's platoon infiltrated in front of the chimera.  Both flyers are reserved with Marbo.  Sentinels are outflanking and the 20 man platoon will walk on.

My opponent decides to seize and gets his 6! 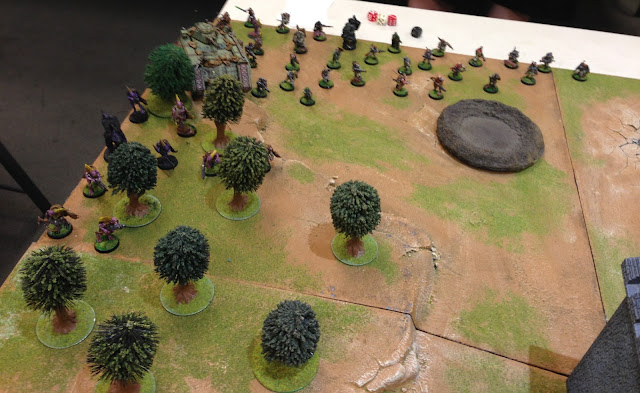 Not a ton of movement, but the chimera shifts up the hill slightly.  Poor dice rolls combined with night fight only cost me a hull point on a rhino. 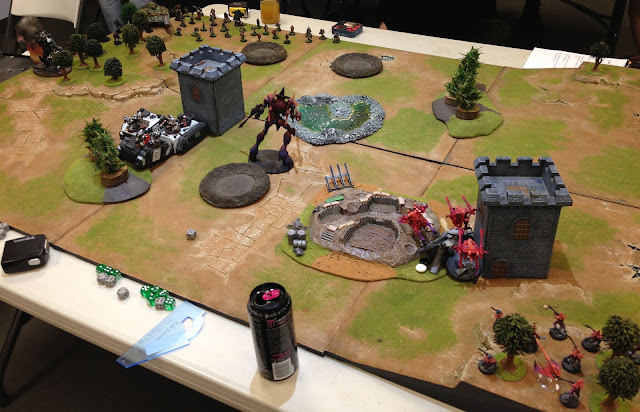 Sooo... deploying first and going second in purge the alien against a refused flank/reserved deployment poses some issues, to say the least.  War walkers get fortune and prescience, wraithknight gets guide.  My 3 transports move up to get cover from the tower, all pass their terrain tests, and both rhinos pop smoke.  Walkers and wraithnight shift towards my only targets. 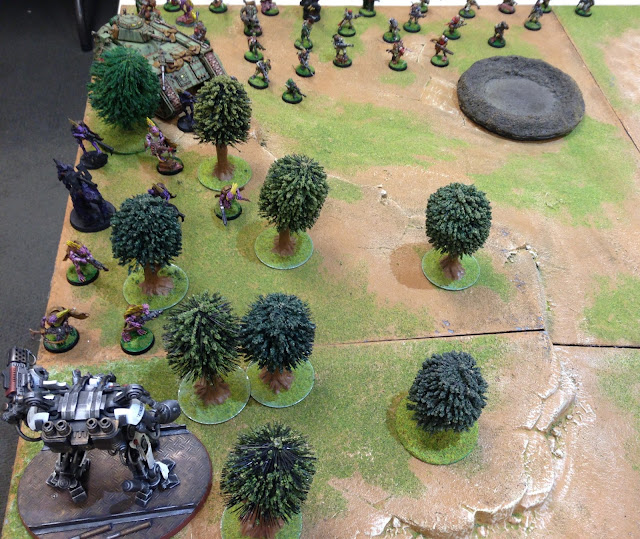 My NDK shunts to the flank and burns down half of Harker's unit but they pass morale. 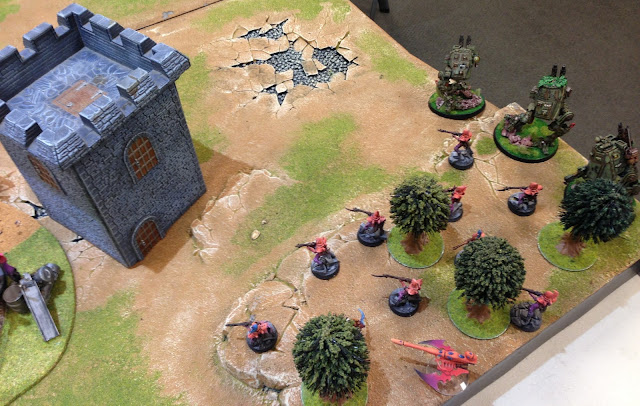 Sentinels arrive deep in my right flank and will burn down several guardians (I pass morale). 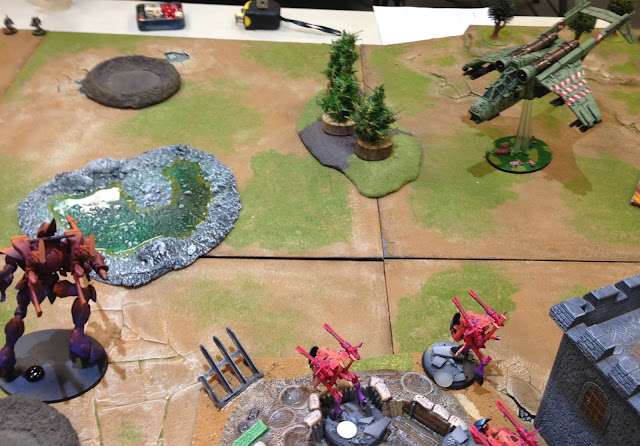 The vendetta with flamer vets flies on but is unable to wound my WK. 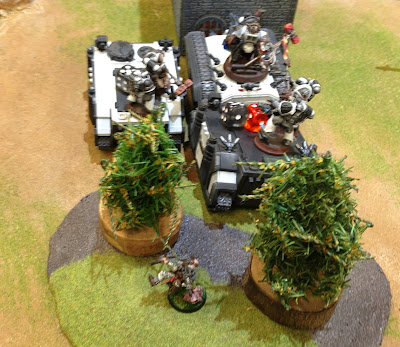 I spaced out my walkers in preparation for Marbo but totally forgot my transports...  He chucks his bomb, pens all 3 vehicles, I fail all 3 cover saves, and all 3 explode yielding 4 victory points with first blood.  I lose several marines in the explosions and one of the units gets pinned.  The rear unit ends up with 1 survivor (psycannon) who flees and will auto-rally next turn. 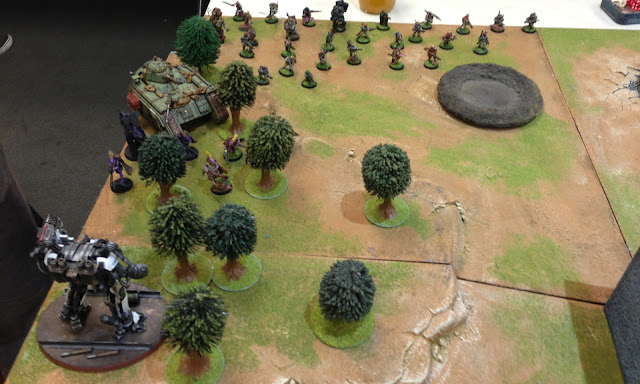 His main force moves except for the heavy weapons.  The 20 man blob arrives in the far back right corner.  The rest of his shooting ends up ineffective against either my toughness or saves. 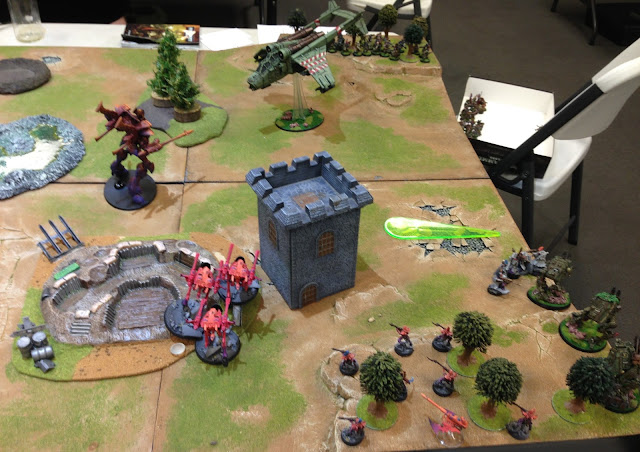 My rangers arrive on the right.  I'm forced to bring them in next to the sentinels since his big blob is camping the back corner.  Walkers get prescience and fortune, wraithknight gets guide.  Guardians and rangers target sentinels but only kill 1 so I have to commit the walkers to finishing them off.  My wraithknight fails to hit the vendetta.  The strike squads and henchmen combine fire to kill Marbo.  My NDK burns Harkers unit and finishes them in assault. 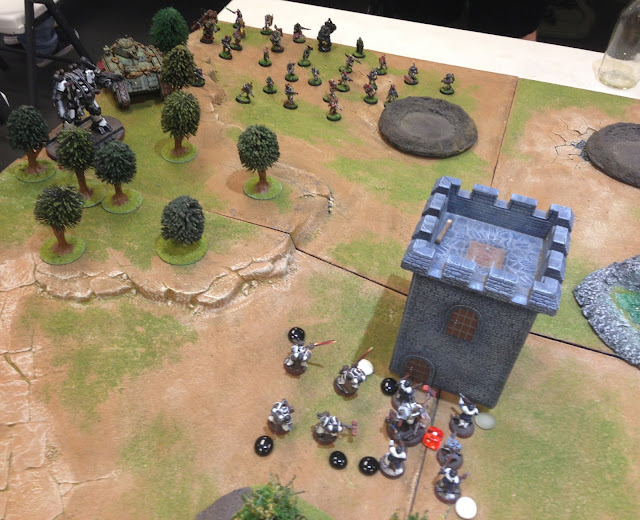 He shuffles his blob again except the heavies.  The second vendetta doesn't arrive. 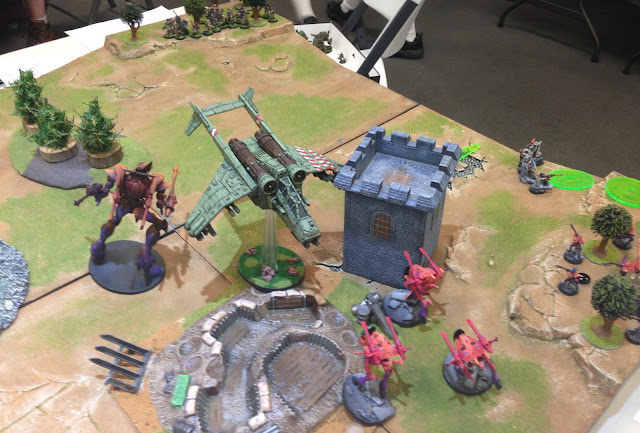 The 20 man blob in the back shuffles up.  The vendetta zooms up 18" and fires on walkers but fortune saves all damage.  Autocannons bounce off my wraithknight.  His primaris psyker hits my NDK with psychic shriek, I fail DtW, and roll triple 6's for my leadership test!  He dies a horrible death. 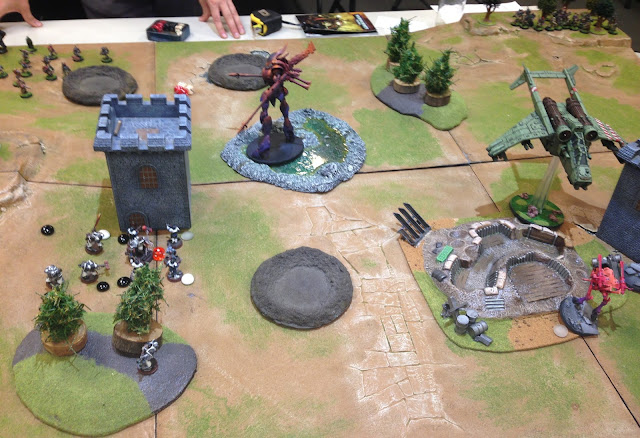 I'm indecisive with my WK in the middle.  His big blob has a commissar and melta bombs.  I don't think he can finish off the 20 man squad in the back right so he mostly jumps around the middle.  Walkers get fortune and guide again. 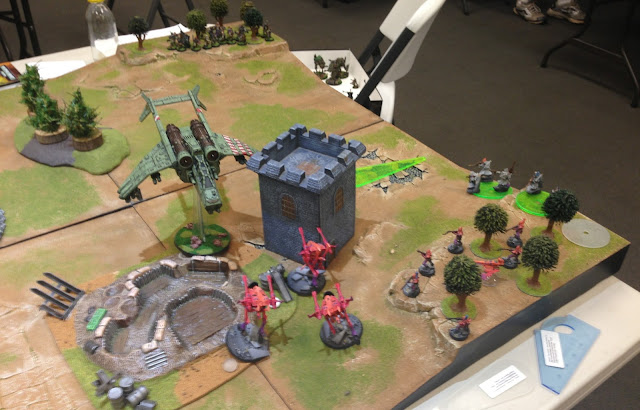 Rangers jump into the craters (blast markers) from the sentinels.  Walkers are able to get 2 glances/hull points on the vendetta thanks to guide, then battle focus around.  My GK group on the left is able to explode the chimera and take out half of the CCS. 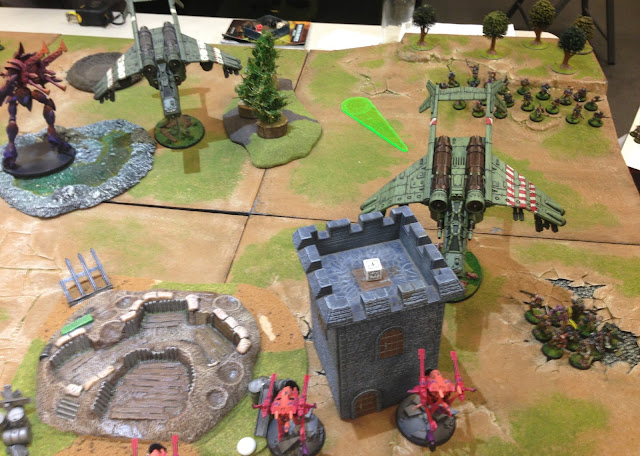 The last vendetta arrives up the middle.  The damaged one hovers over and drops out the flamer vets who burn down all my rangers.  My walkers survive all lascannon fire thanks to fortune again. 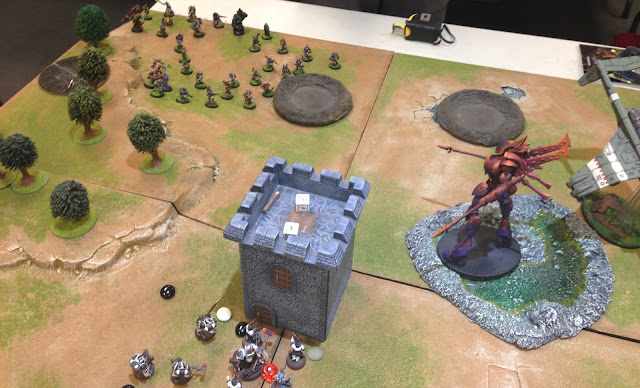 The enemy warlord and psyker try to duck for cover in the big blob.  My saves are getting hotter as I only lose another knight and henchman.  The psyker tries to puppet master my WK and fails.  The 20 man blob in the back right moves and runs trying to get into rapid fire range of my guardians. 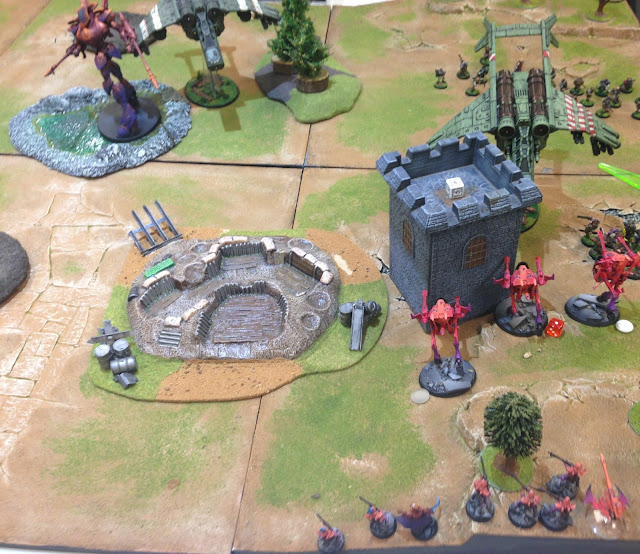 Fortune and prescience on the walkers, guide on the guardians.  Walkers shoot down the flamer vets.  Guardians run away from the 20 advancing guardsmen. 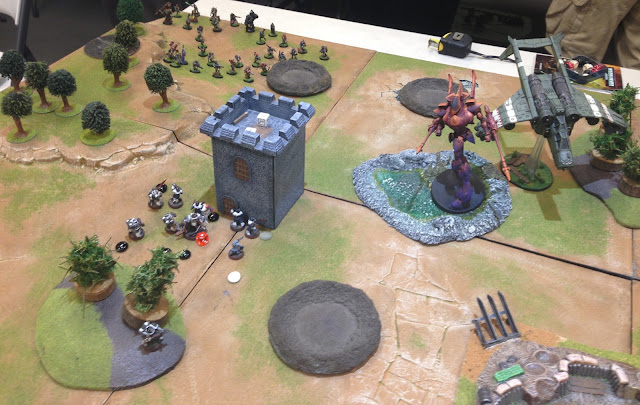 My WK finishes off the damaged, hovering vendetta.  Marines and henchmen fire into the surviving CCS, claiming that unit, his warlord, and primaris psyker. 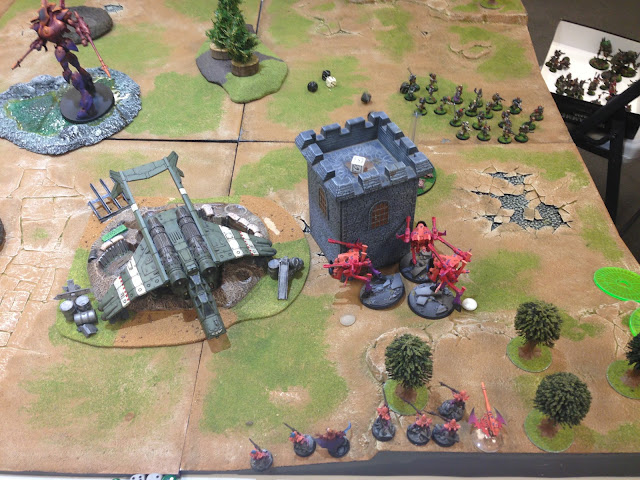 The last vendetta zooms up (no stand due to WMS, it's fine).  The 20 man blob moves up but it's just out of rapid fire range.  I lose 2 guardians to lascannons, but my warlord survives and the unit passes morale. 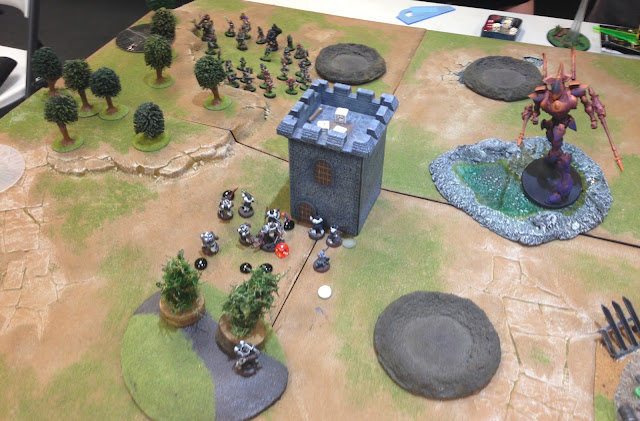 The big blob moves up for shots and I lose the 2 lead henchmen, but my inquisitor tanks the remaining wounds for the unit. 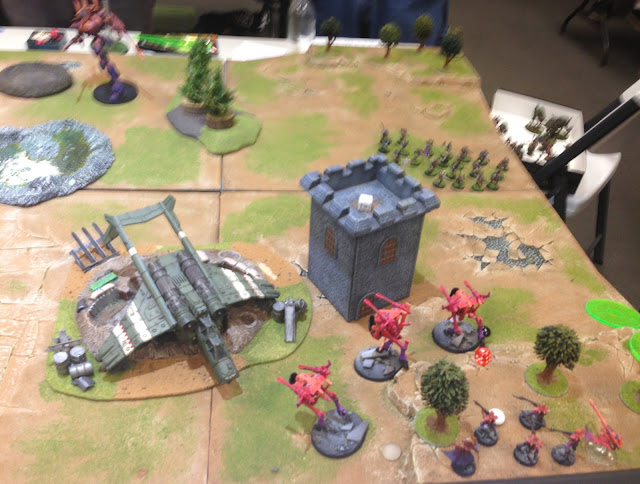 I'm in a bad position in my corner so I try to put the walkers between the potential disembarking unit striking my guardians.  I fail to shoot down the vendetta with my lance platform and WK.  Walkers target the 20 man blob and kill half. 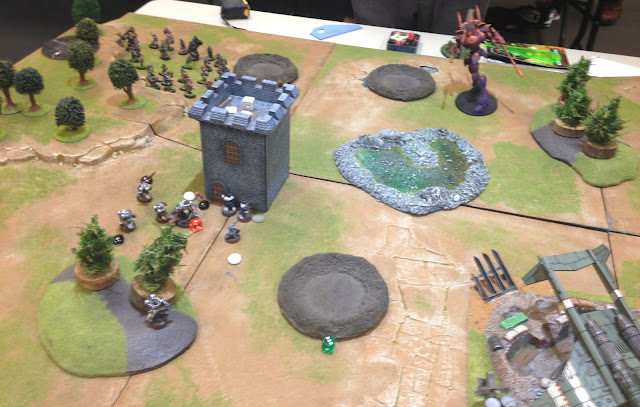 My infantry on the left focus fire guardsmen out of cover and kill a bunch.  WK jumps over for linebreaker.

We roll for the end and it's game over!

My opponent has killed my 3 transports, rangers, and NDK with first blood for 6vp's.  I've killed his 2 HQ's plus transport, Marbo, Harker's unit, vets, vendetta, and sentinels with warlord and linebreaker for a 10-6 victory!

Man, I started this game really down in the dumps due to getting seized and giving up 4vp's to Marbo's alpha strike.  It just goes to show you can't give up until it's really over.  I shouldn't have spread out as much and allowed my opponent to split me up with a refused flank, but I really wanted to use those towers to cover my vehicles.  Dave was a really nice guy with a great looking army.  He didn't make many mistakes per say, but he did waste a bunch of shots on my WK early on that allowed my GK units to survive longer than expected.

Second place is my best showing at our shop's monthly event since 6th edition was released (took 2nd @ Syracuse in April also)!  Perfect battle points and only losing out on sports/comp to my co-author by 4.  Needless to say I was very pleased with the results, plus I played some really tough and close games.  It was a hodge-podge list with no real drive other than to play a WK and NDK side by side.  I like the new Eldar enough that I decided to flesh them out for my 2013 DaBoyz GT army, so stay tuned for a hobby deluge running up to the event like I've done in the past 2 years.
at 8:00 AM