A Tyranid Unit Worth Taking?

Posted by Crispy
I keep on going back to Hyv3mynd's post A Tyranid Unit Worth Taking, and thinking about the units I want to play with and how they fit into my new 6th lists. Lately I've been trying out a couple  of different builds, taking out high priced HQs and rotating in a few units that I've been meaning to use.

Before I go into a unit-by-unit breakdown, I'd like to asks the community at large, What units have you seen change in the 6th ed switch. Good or bad. I'll just cover a few here, but I'd also like to hear from you. Each of our local metas are different, and you're going to have different experiences than me. I'd love to see how your units are working. In what scenarios are they doing well? Or are they tanking?

I want to start with a unit I love, the Ripper Swarm:


Ripper Swarms are a unit that I desperately want to make work. When I think of Tyranid fluff, swarms of aliens pouring over Imperial defenses, these little guys come to mind. In 5th, I liked to use them quite a bit. You could get an easy 4+ cover save on them, and with the Swarm special rule, you could make that a 3+. Because a basic unit clocks in at 90 points, I had no problem going to ground for the improved save. So, you have a mobile cover granting unit that could get a 2+ save, brilliant!

How about now? 5+ cover is the new norm, and they no longer get stealth. Because they're fearless, no going to ground either. Couple that with the 5+ cover save they confer, they've lost their staying power and their protective effects.

I've taken them in the last few events, and I don't really expect them to do much (the bar iis set pretty low), but in the last 6 games they haven't contributed the the battle at all. Maybe they attracted the attention of fire from some of my other units, but even then it wasn't much. I take them for fun and to add a little goofiness to my army, but when they're destroyed so easily, even the fun of them is taken away.


Instead of running a Tyrant or the Swarmlord, I've been going cheap: Prime 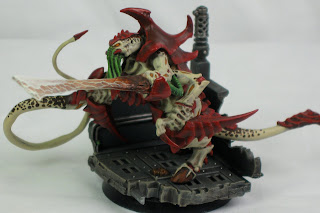 This is an idea I've been thinking about for a while. Taking a Tyrant and the obligatory Guard adds up quickly, especially if you're like me and take 2. I decided to liberate the 400+ point deathstar and go with the guy above. Clocking in around 100 points, he's worked fantastically. He's cheap, but he's still a beatstick. In the past 6 games, he hasn't died and has been the anchor for my forces.

I'm not sure if he changed that much with the new edition (posion does work a bit better on him now), but the meta has changed. Small, high priced units don't seem to be getting the job done. During these last few events, I've been surprised by how many bodies I've been able to field now that I have the points for them. While he hasn't himself been greatly affected, the unit size shift has favored his inclusion. 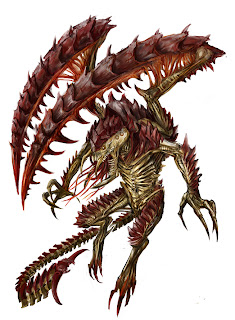 Who else loves the model? My problem is that I send them into high risk situations, unsupported and expect them to do something. I need to take my own advise and stop doing it. In effect, the lictor is in reserves for at least 2 turns: Turn 1 is normal reserves and Turn 2 (assuming it comes in) he is on the board but is doing nothing. You can't do much with it for at least 2 turns. With this in mind, you can formulate a few strategies.

In terms of how the 6th shift affected the lictor, not too much. There's the reduction in normal cover save (4+ --> 5+), but that's about it. The reserve bonus is helpful, but not much to write home about.

What do you guys think? What are some units that you didn't take before, that are doing better now? How about old faithful units that are tanking?

Email ThisBlogThis!Share to TwitterShare to FacebookShare to Pinterest
Labels: Tyranids