A new edition has dropped, and I want to look into what this means for Daemons.  First I plan finish my final tournament of 6th edition before starting into that analysis.  I know everyone is eager to see Daemonology in action, but from a core rules standpoint there has not been much change between 6th and 7th edition (bear with me on the psychic phase part).

My draw in Round 1 against Koszka (Round 1 here) meant I was actually paired down for round 2 - we were the only ones who drew in spite of the mission type.  My round 2 opponent, Nogle, brought with him a Spartan and a pile of Lascannons too.

The relevant mission details include:

My list can be found in Game 1, try the link above.  Nogle brought an interesting assault oriented list:

Kharn - Hatred for his unit

Deployment
I win the roll for deployment and choose a corner with good cover and with LOS blocking terrain from the short board edge in Nogle's deployment zone.  I plan to use this as a screen if I have to to block LOS and grab cover.  We have 3 objectives - 1 on the hill in my deployment, one in the far corner of the board and one in Nogle's DZ.  Nogle wins the chance for first turn, and gives it to me.  I am bummed since we have Night Fight and it makes it takes away Turn 1 charges.  Not to mention exposes me to the Daemon Prince if I get to close and to his Land Raider.

I leave both grinders and the Helbrutes in reserve due to the abundance of Lascannons.  I also leave 1 Horror unit with them.  I deploy the Daemonettes as a screening unit if the Daemon Prince gets too close.

For my Scout move, I simply shift to my left across my DZ to avoid the Daemon Prince. 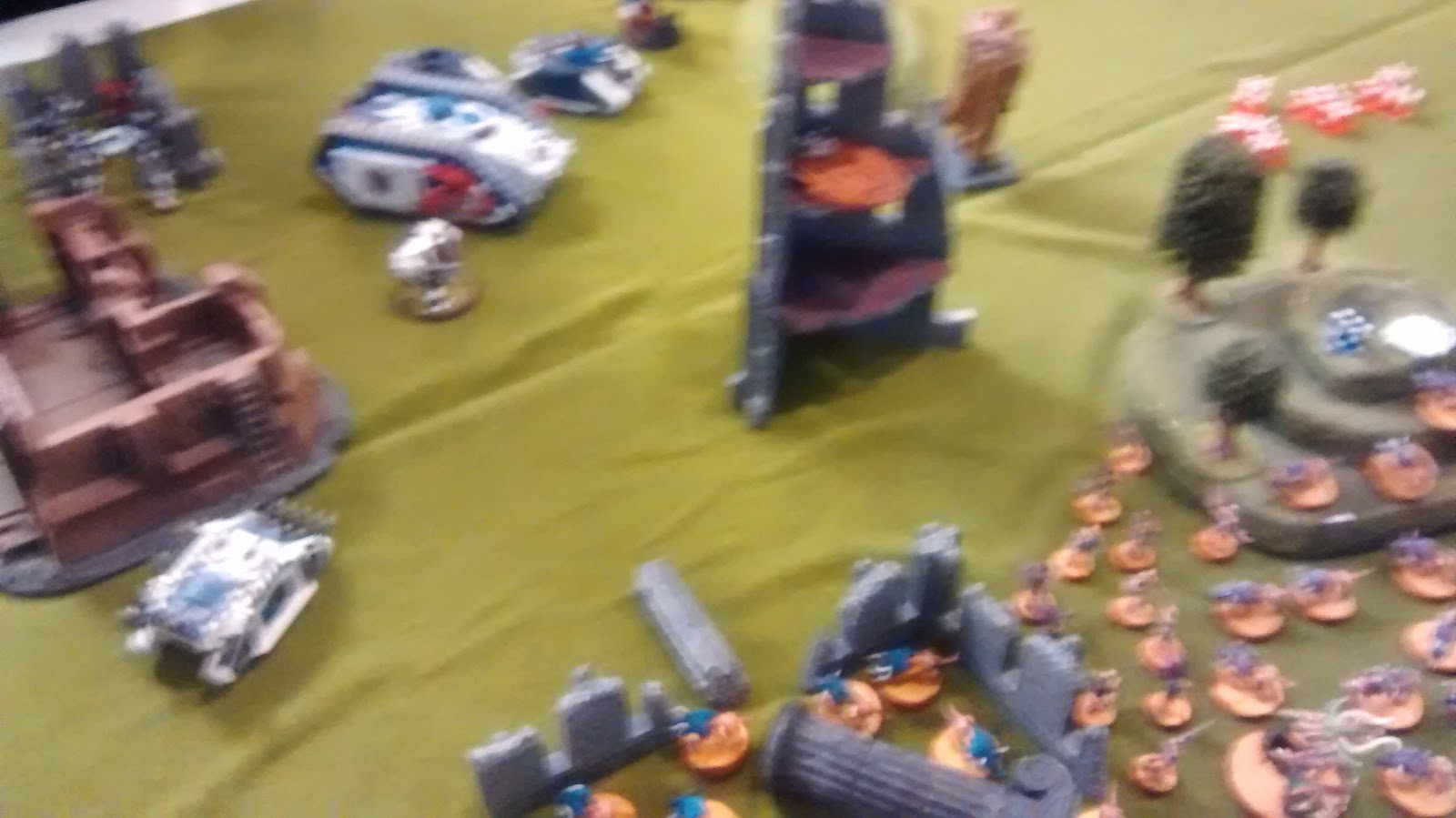 Unfortunately fuzzy, I was still working out my new Camera. I move forward into the ruin with the LoC, to get cover and avoid being charged by the Berserkers, I am going to have to try to smash open the Spartan or eat a really painful charge from Berserkers.  Everything else continues to move left into the ruins and away from the Vindicator/Daemon Prince.  The Dreadnought remains a problem for the Hounds. 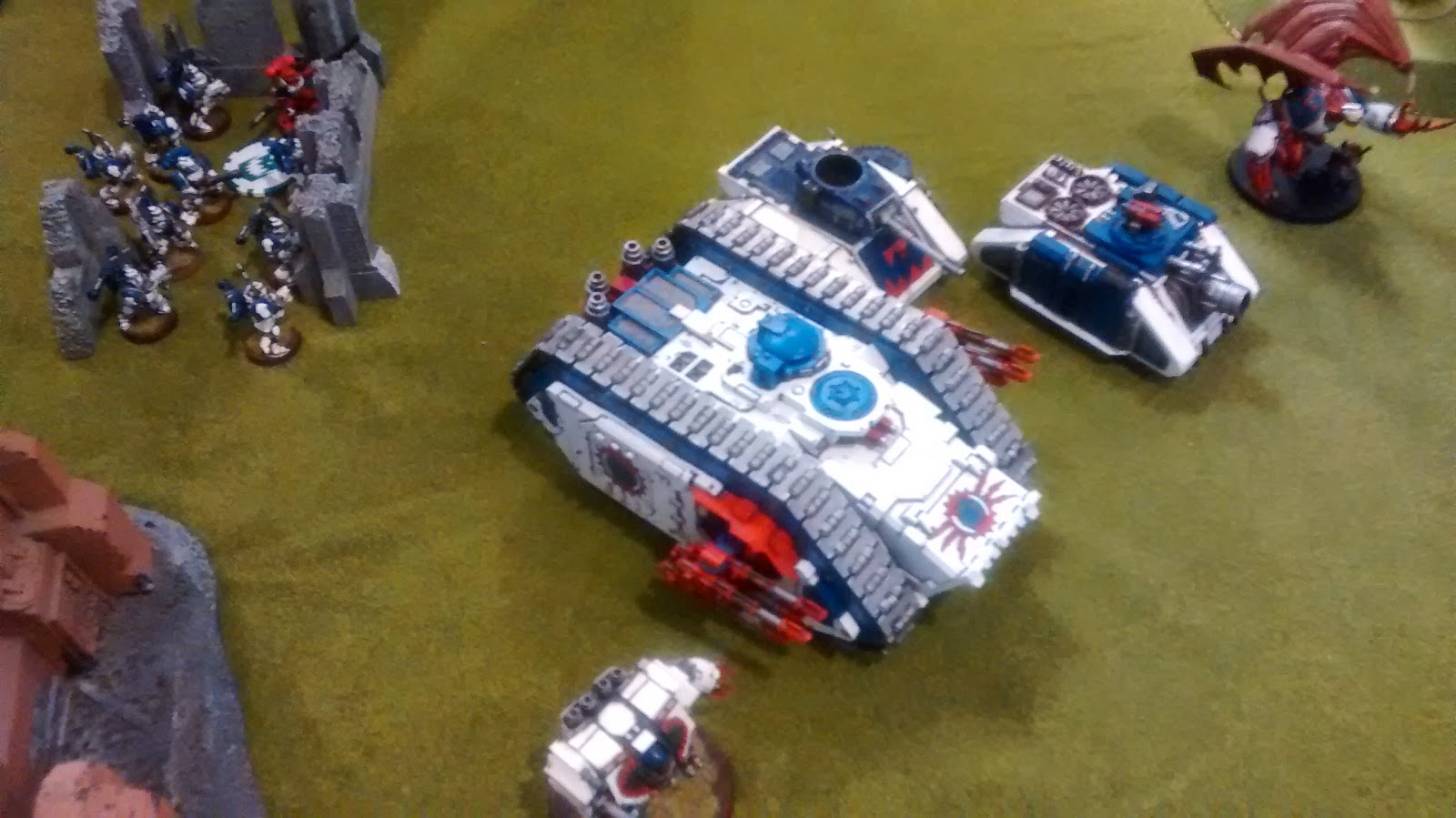 I take a shot at the Spartan using my lance 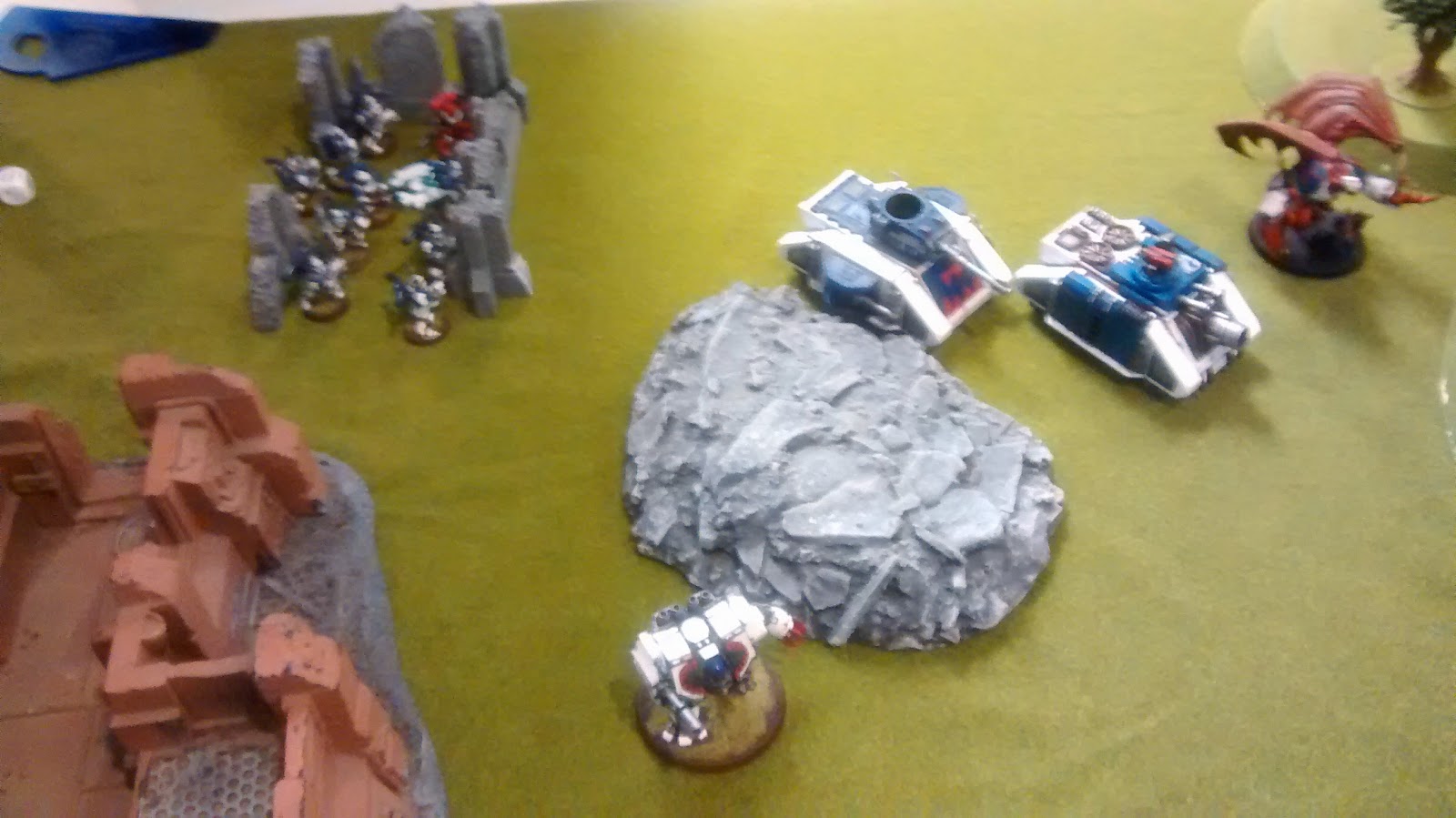 Penetrate, fail cover, explodes for First Blood! That changes the complexion of the entire game.  A few Berserkers die off in the explosion.  The Warp Storm does nothing - a theme for this tournament actually. 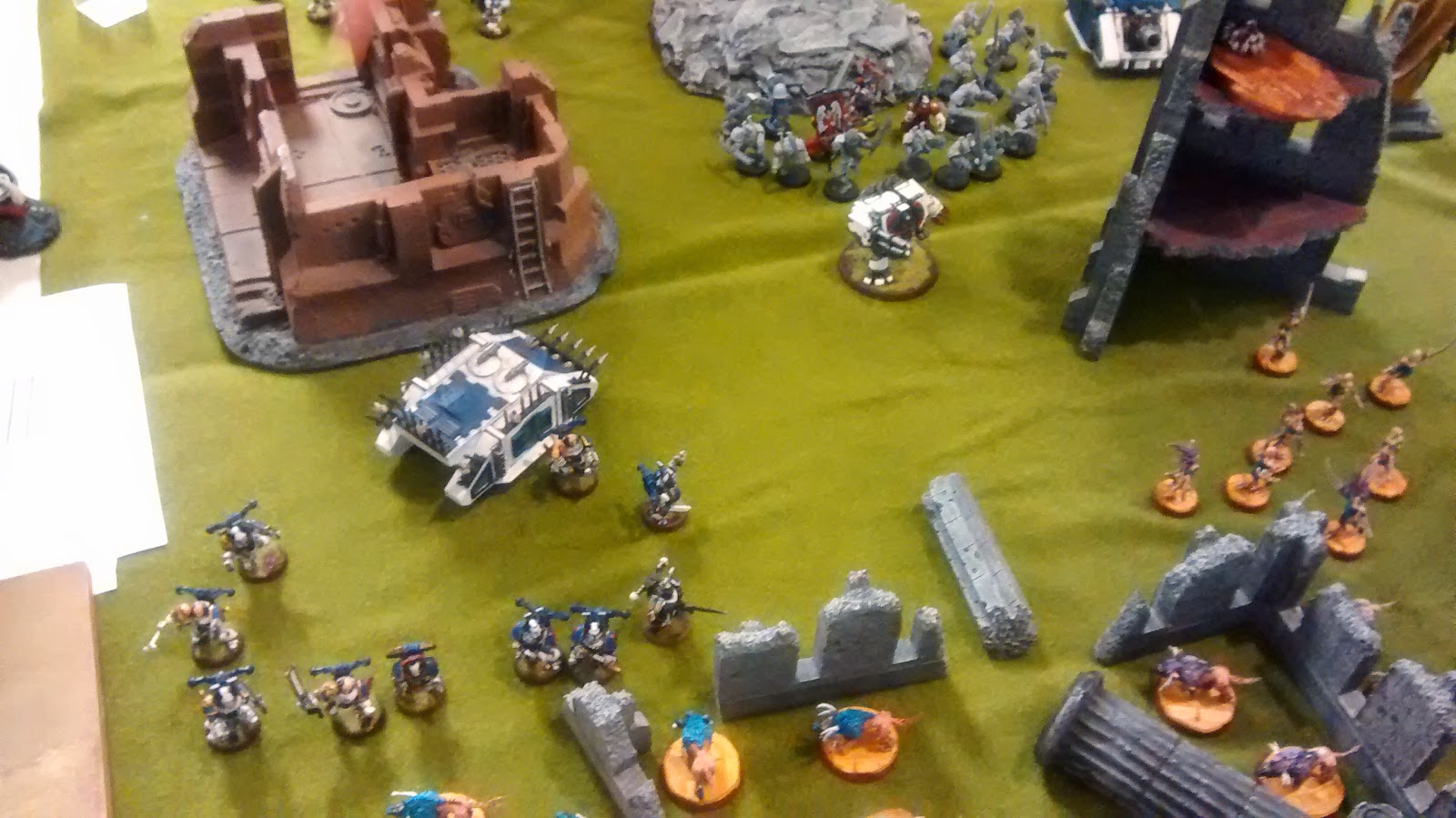 The CSM get out to flame some Hounds, and I take a few wounds.  At this points Nogle mentions I am moving REALLY fast - which I am.  I am used to being cramped for time in games - but I slow down and it is great advice.  This game is REALLY fun, although pictures suffered a bit.

I get reserves but fly all over the place.  1 Grinder mishaps, the other makes it in and I mishap Horrors to get placed in the far corner and a Helbrute goes into reserve. Another Helbrute ends up in the corner by the plaguebearers. 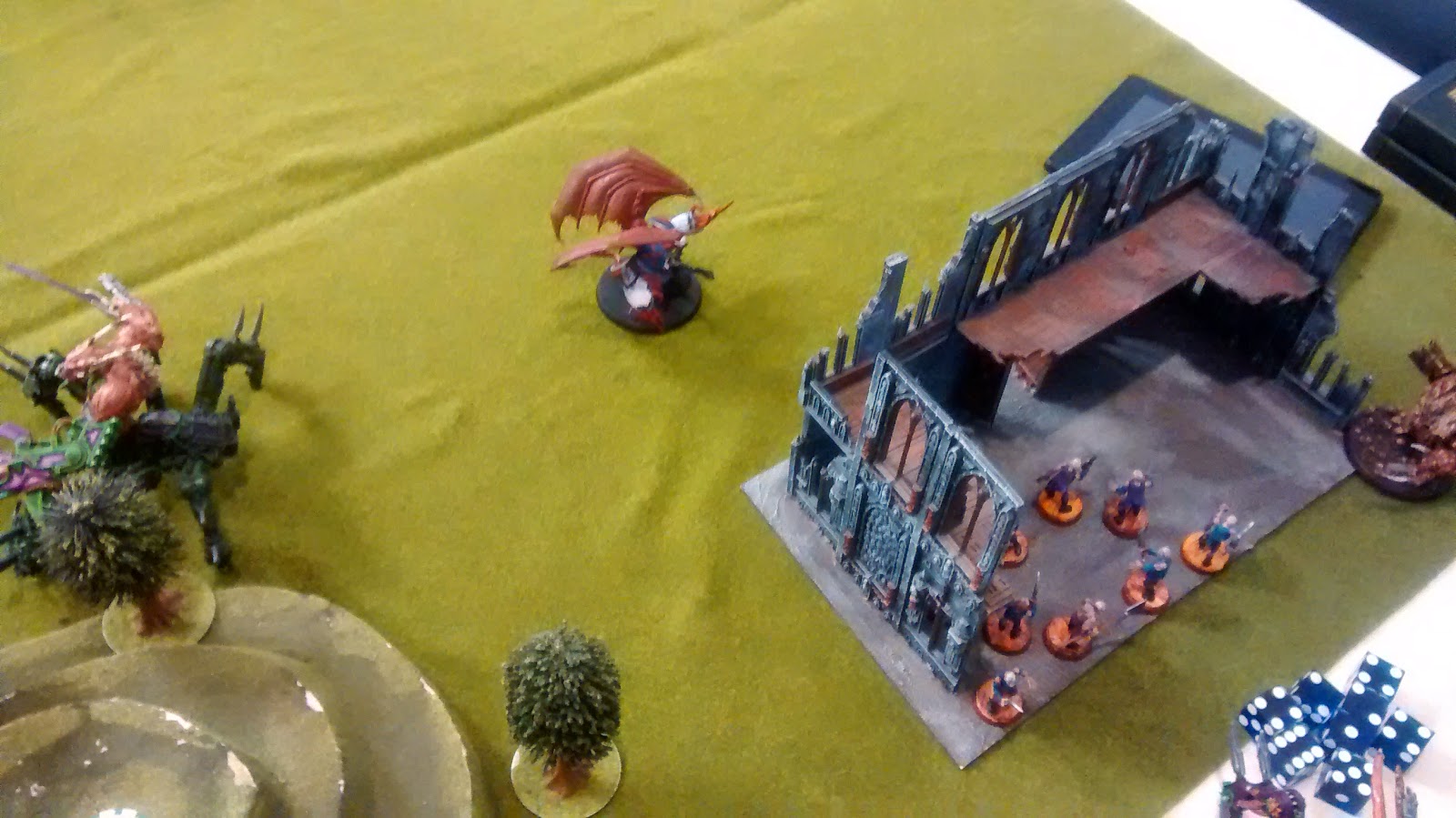 The Daemon Prince Swooped towards my Plagues, ready to clean the objective, last turn. 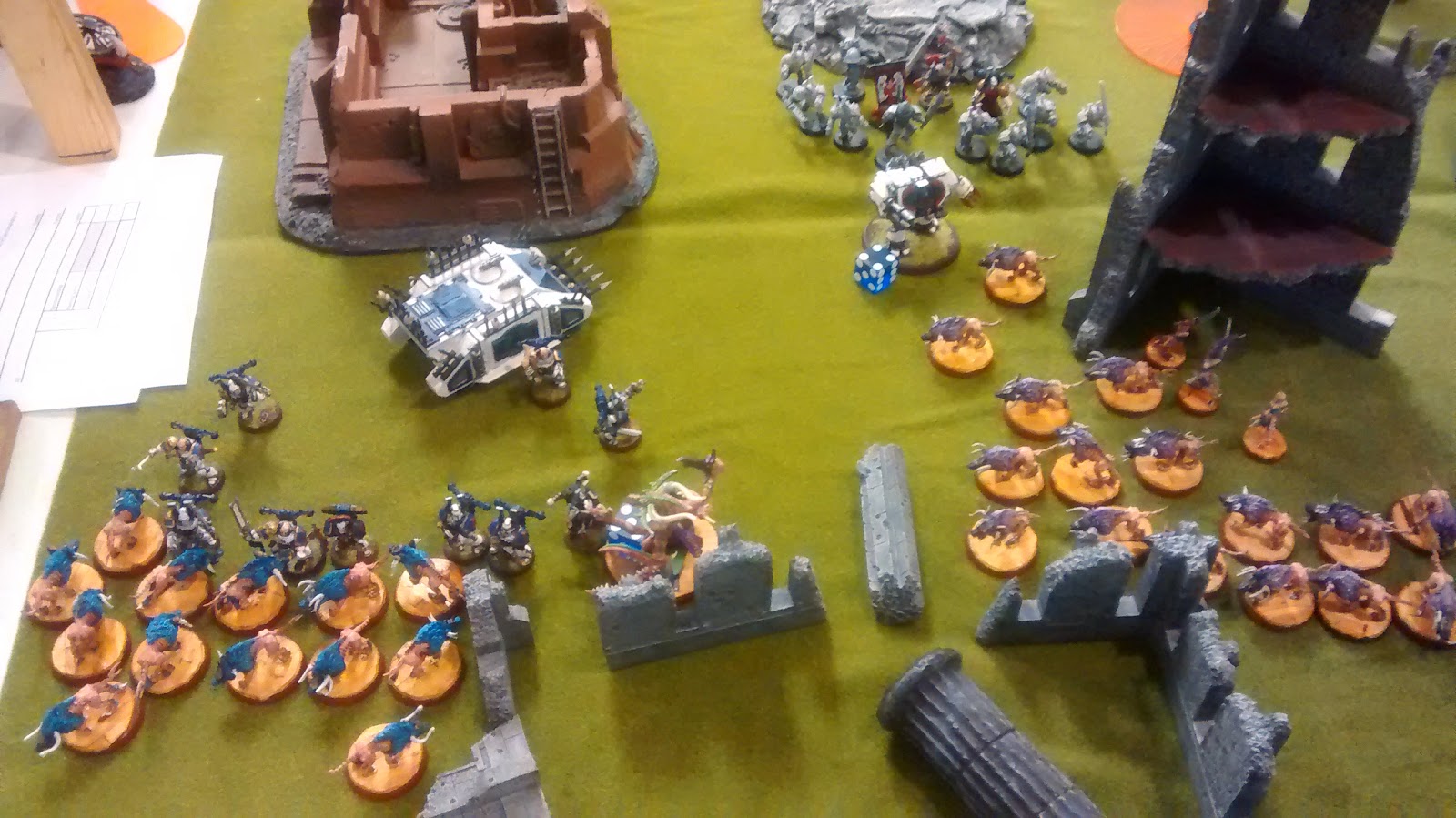 Hounds get ready to engage the Berserkers, while the LoC takes some shots at vehicles.    I also get the Keeper of Secrets into the fray.

I seriously underestimate Kharn and the Berserkers. 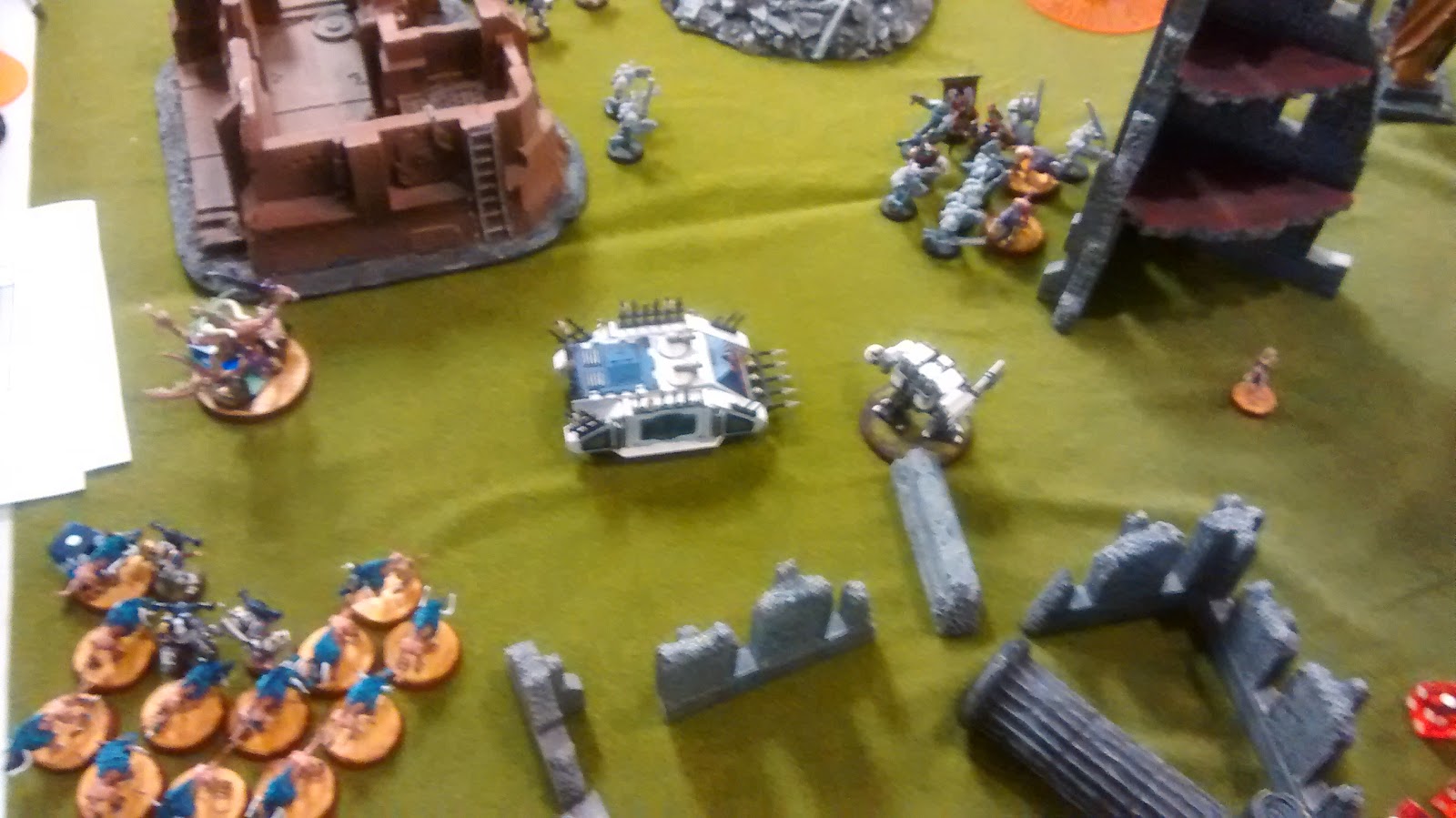 One hound unit is nearly annihilated, luckily I had managed to Hallucinate the Dread and it stood around for a turn.

I lose my plagues as the Daemon Prince makes short work of them. 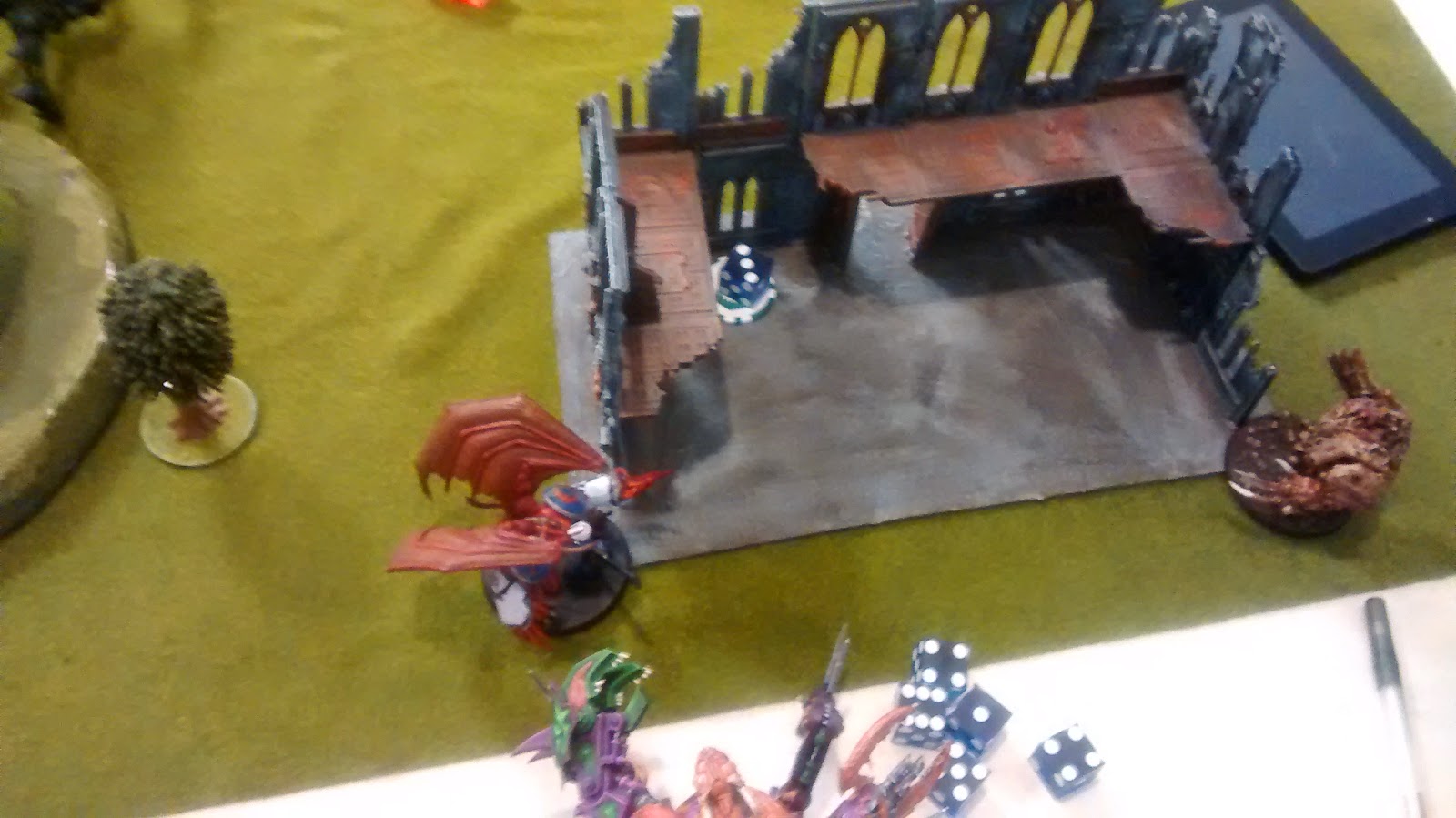 I need to use Grinders to hold my objectives no was I have 1 Daemonette left and the Horrors could not make it to an objective given half a dozen turns they are so far out of the way.

Turn 3-5
I drop in the second Grinder more conservatively.  The Keeper and Grinder get into the Berserkers while my last Helbrute tries to multi-melta his Helbrute and fails.  The hounds move up the flank to attack the troops. 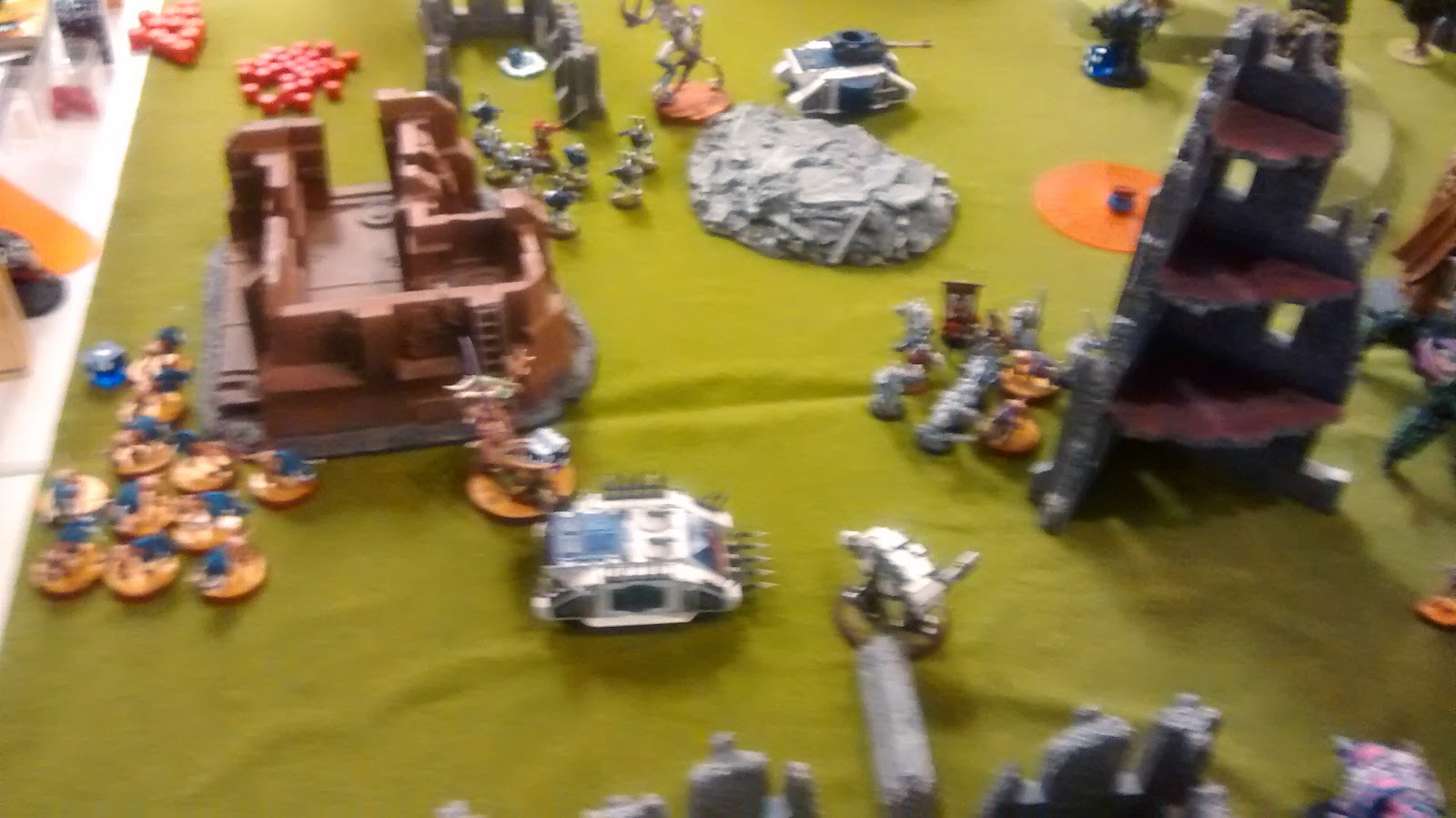 The Keeper is having a party and gaining wounds, although the Lord of Change failed her charge.  The Daemon Prince wipes the Daemonette out and the Helbrutes have a staring contest. 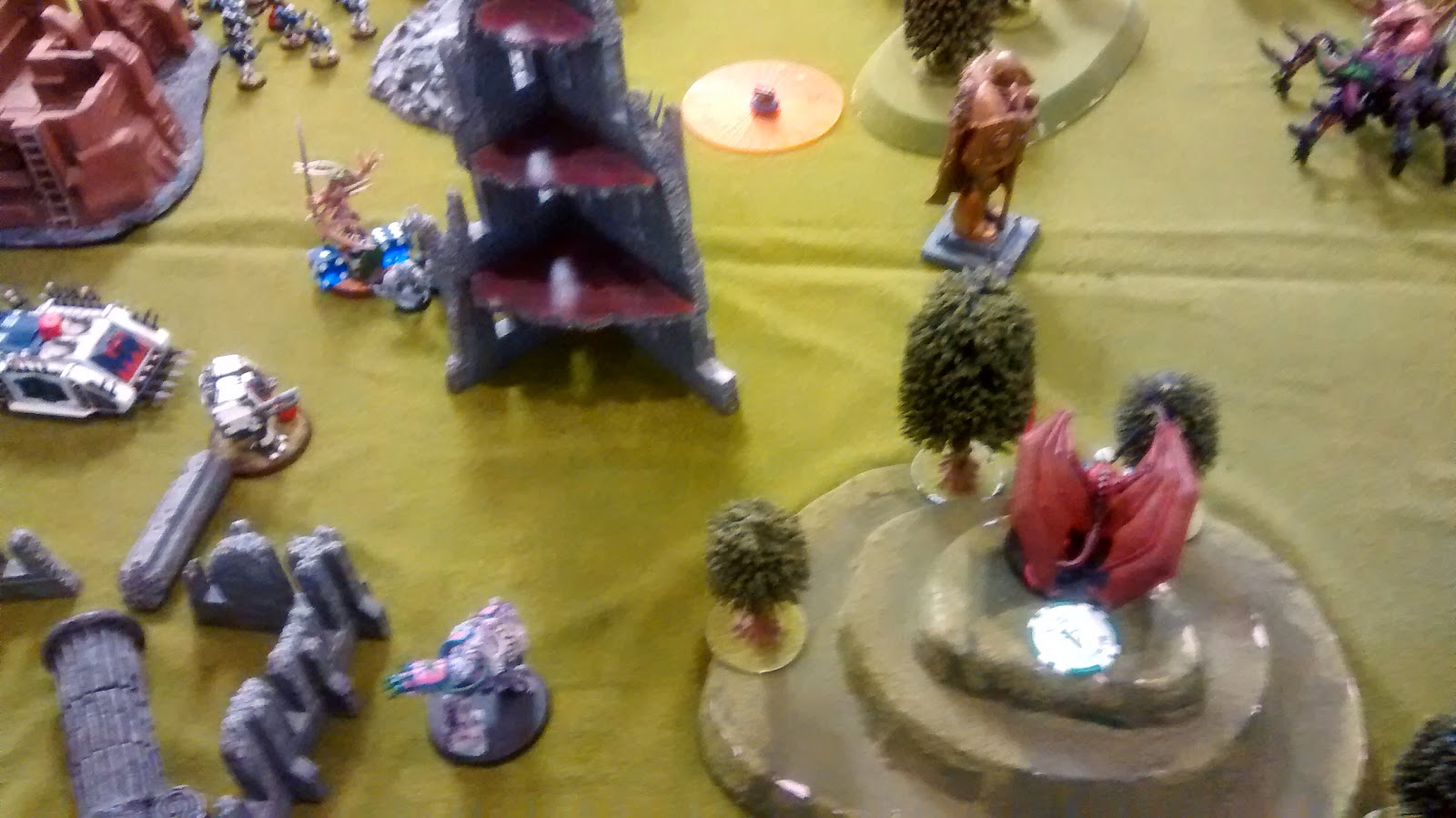 With so much firepower on the board, I am able to finish off Kharn and Friends in assault, the Daemon Prince makes a courageous run at my Soul Grinder on the objective, but I manage to ground him with a Harvester Cannon and he loses his last wound just inches short of his goal.

Nogle and I sum up the game as follows. 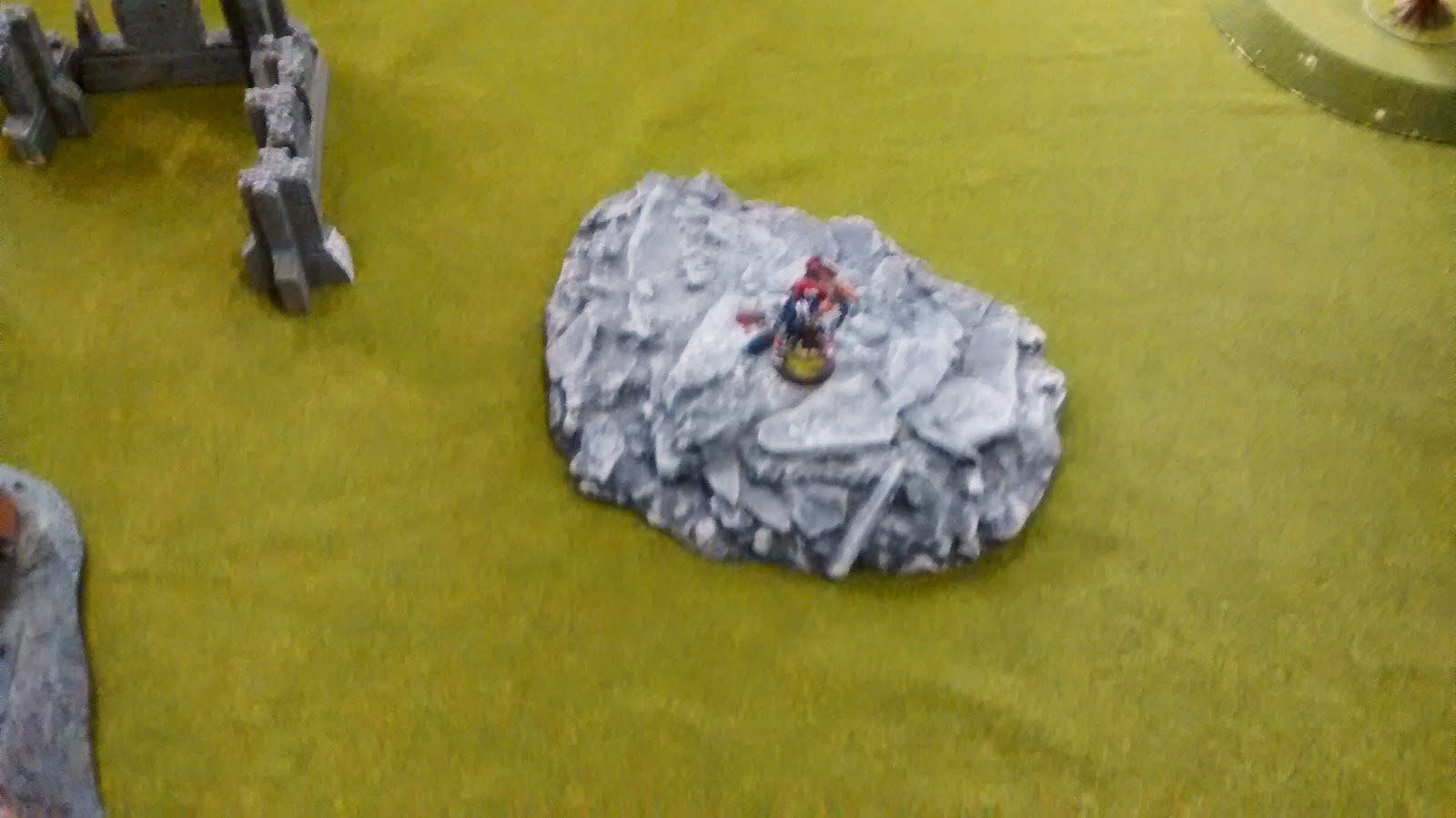 Poor Kharn and his busted ride!

Results:
Primary:  Win for me
Secondaries: Me - First Blood, Slay the Warlord, Linebreaker.

Post Game Thoughts
Full points puts me on track to take a shot at 1st.  My painting is going to suffer from my one unfinished Helbrute, but the fallout of win/losses means I still have a chance to take Battle Points.  That game could not have worked out any better for me, and worse for Nogle.  I really do not think there was much he could do given the quick loss of the Land Raider.  Maybe staying in his vehicle for one more turn might have saved some CSM, but the tide turned so quickly I do not think much could be done.  The Daemon Prince is a wrecking machine in my experience against hounds - but with a Keeper and Lord of Change there to hang out too it was just too many threats on the board.

My final game is against a gunline Tau army - I have played this game before.  It is really a question of if I can eat the shooting and still have an assault capable force left. 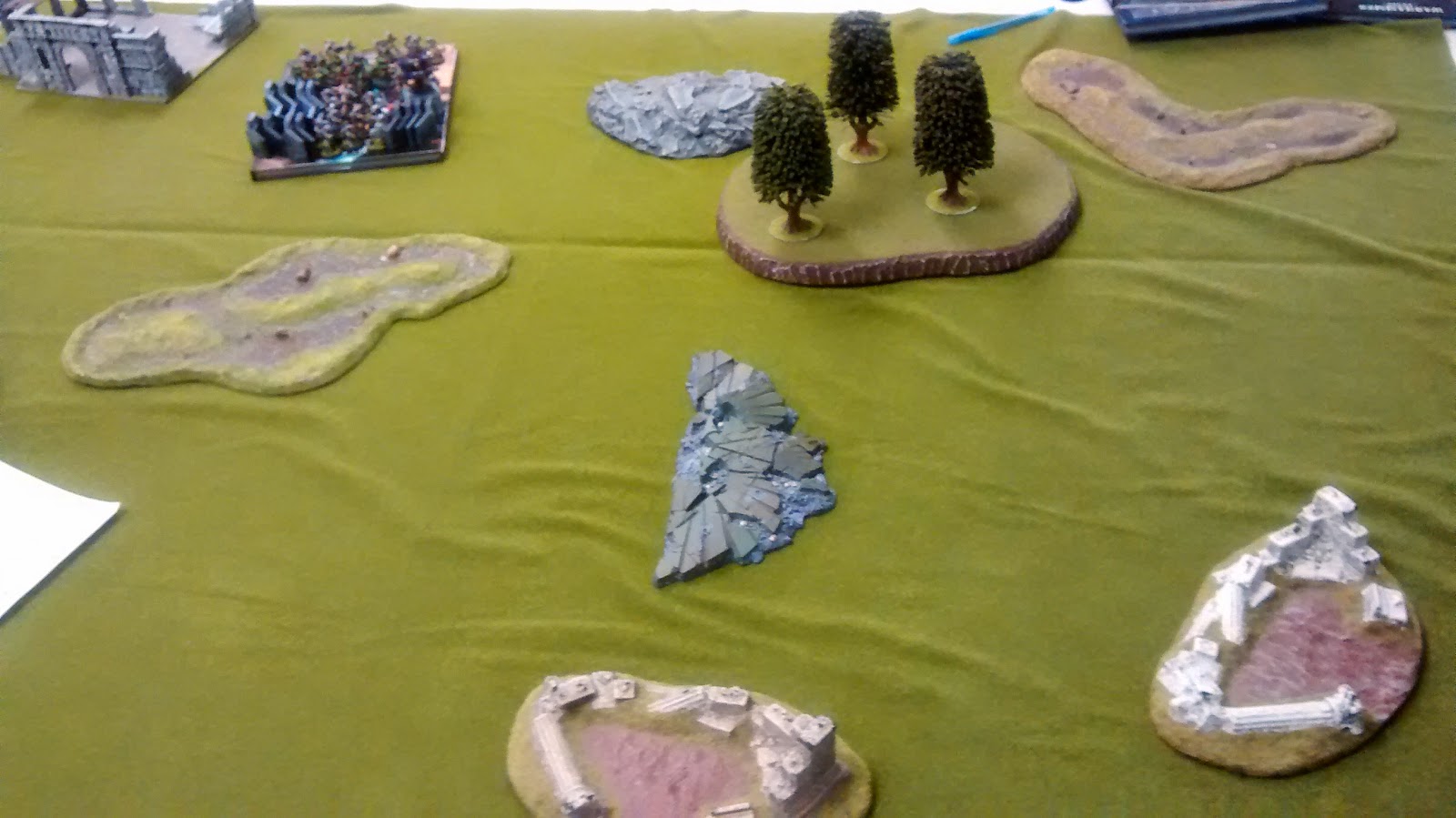 Good thing he brought an Aegis, because this board has no cover at all.  I lose the roll to deploy, so I get the side w/o any terrain.  The Aegis then goes down and the gunline is setup.  I do get to choose turn, and I elect to go second.  I cannot give up more than 1 shooting phase and I need those hounds to move in. 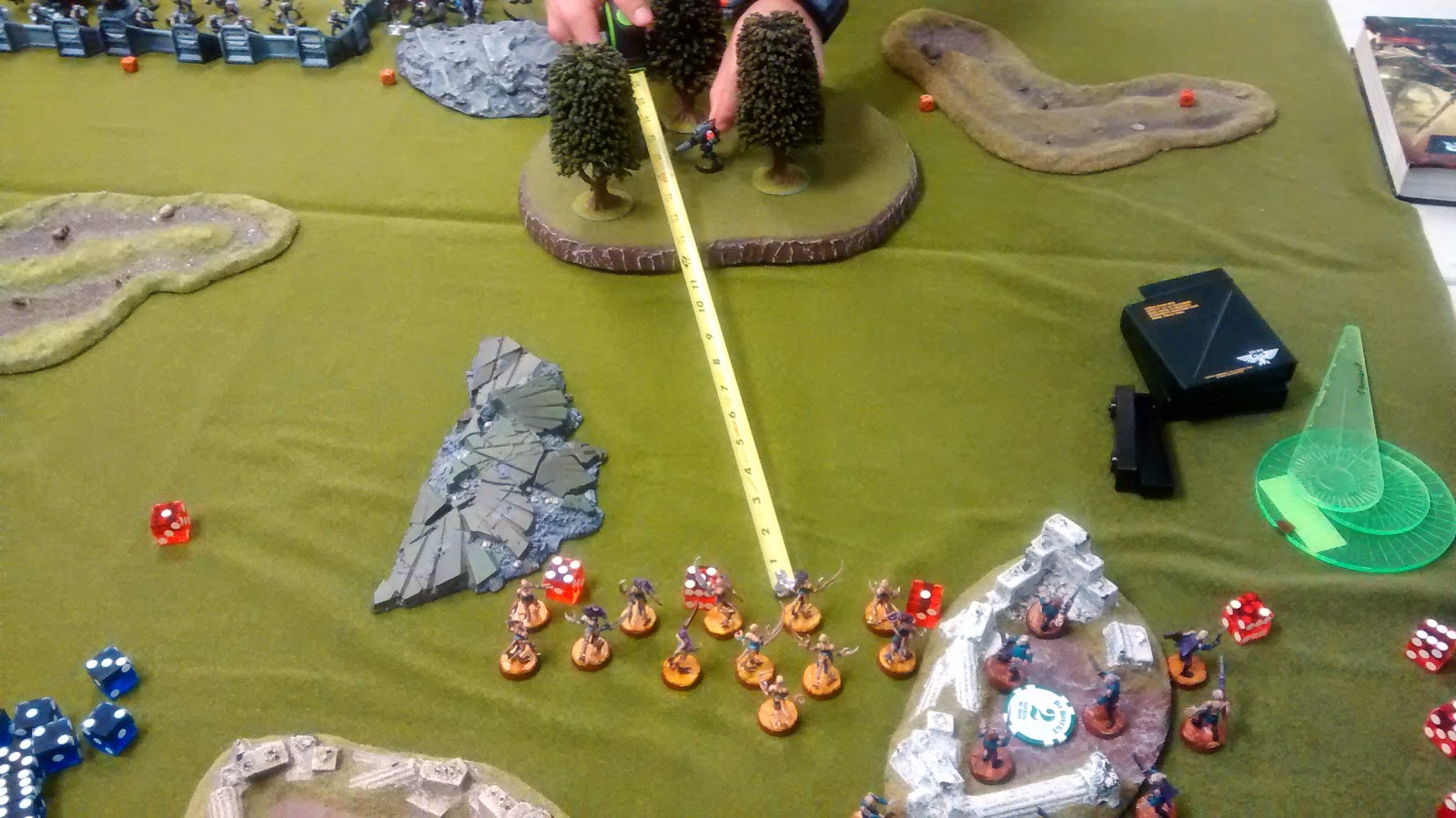 Daemonettes and plagues go down as bait.  I want the Stealth Suits here, of he deploys in front of my hounds, I cannot scout.  Luckily he is getting ready to blast away the Daemonettes here. 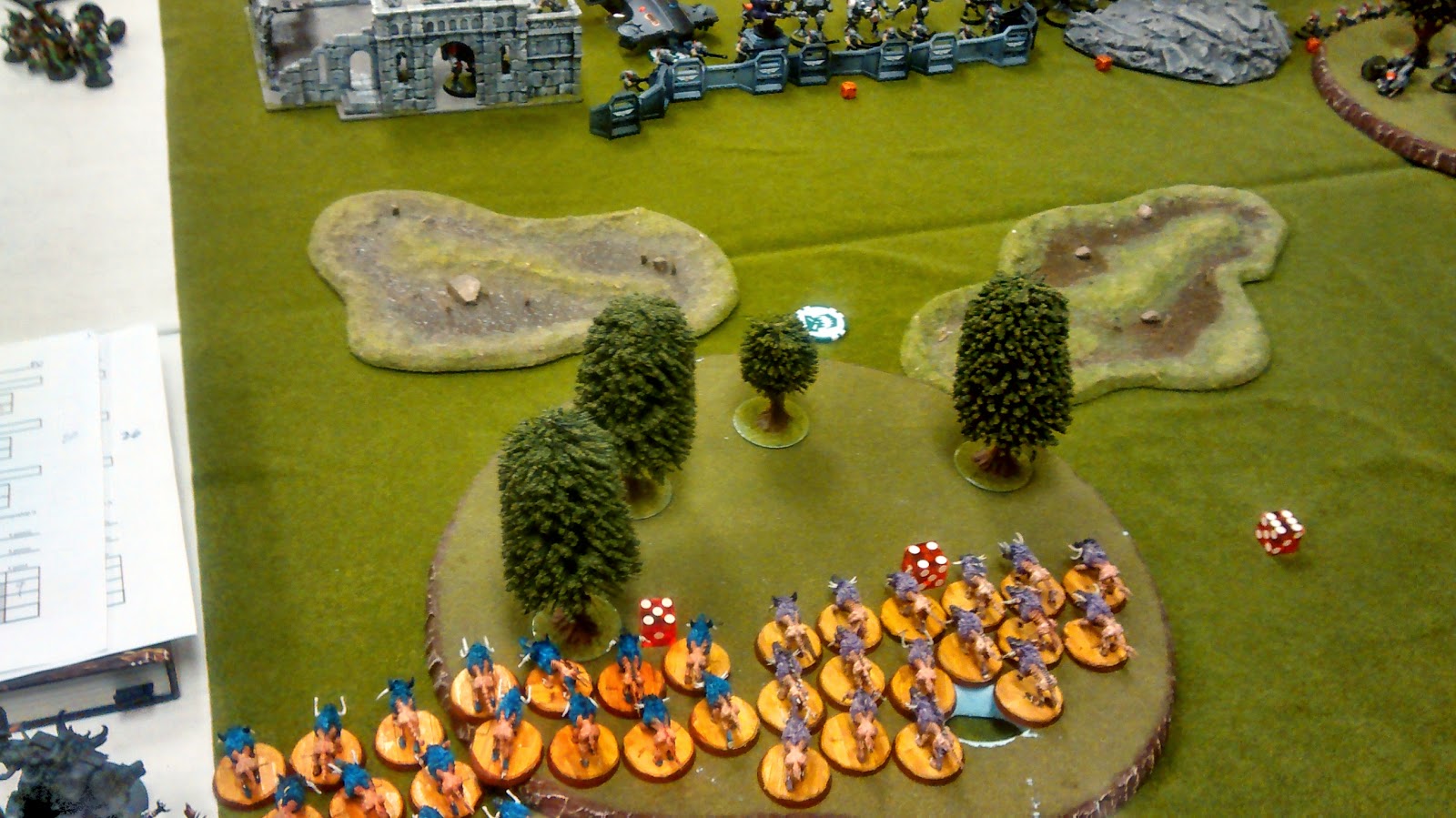 I overload the left flank, the deployment by Tau is spread out and I am trying to keep at least 1 units of hounds mostly intact. 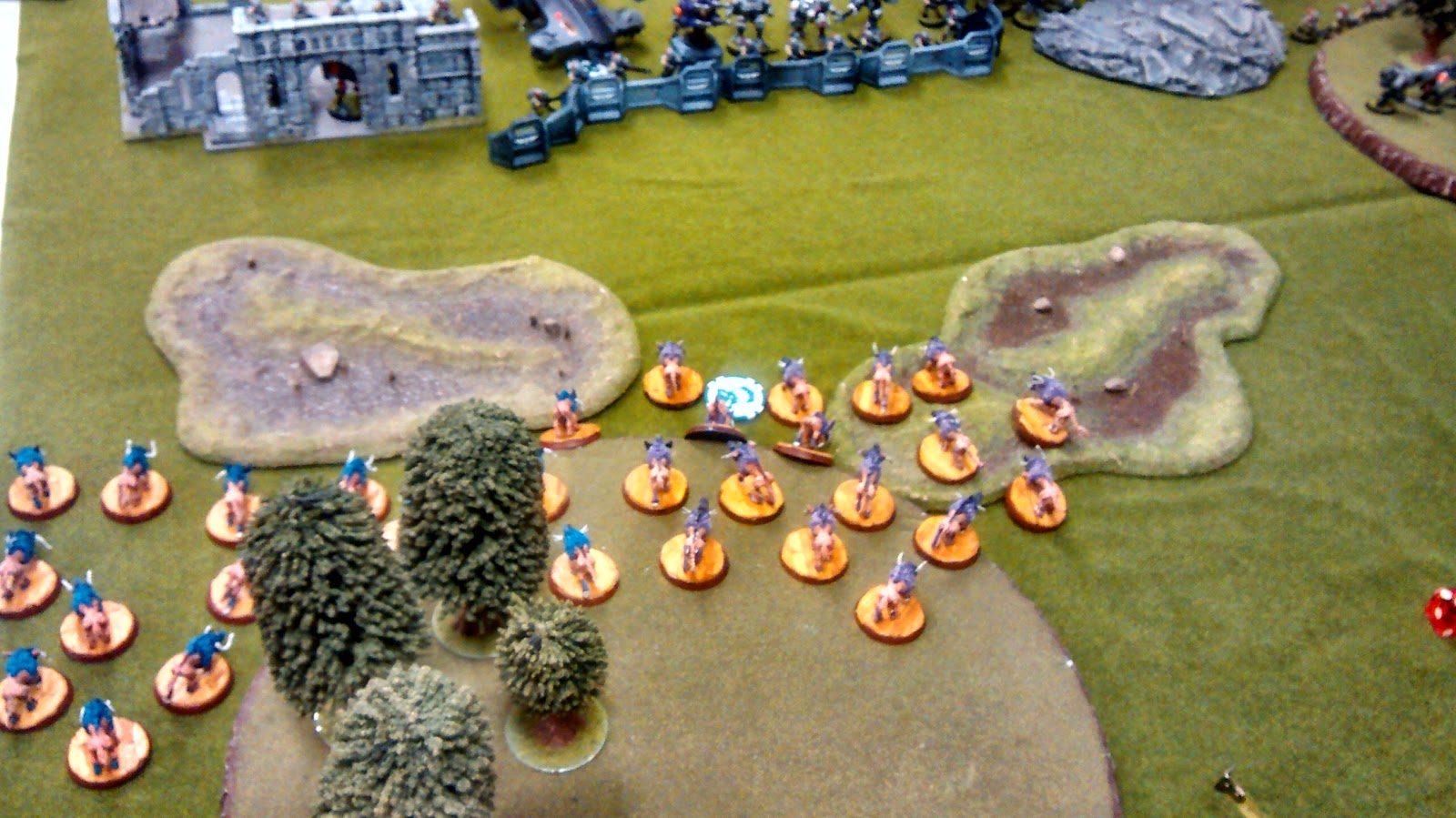 I scout up and slightly spread out - I make a mistake here and get closer to the right flank, I wanted to avoid the Marker lights setup there and I completely forget.  In reserves are the Keeper, 2x Soul Grinders, Horrors, Helbrutes.  I deploy the Lord of Change out of range of everything.

Turn 1
I lose more hounds than I ever have in a single turn of shooting due to Marker Lights, overwhelming small arms fire and my mistake.  Not to mention the lack of Night Fight and cover. 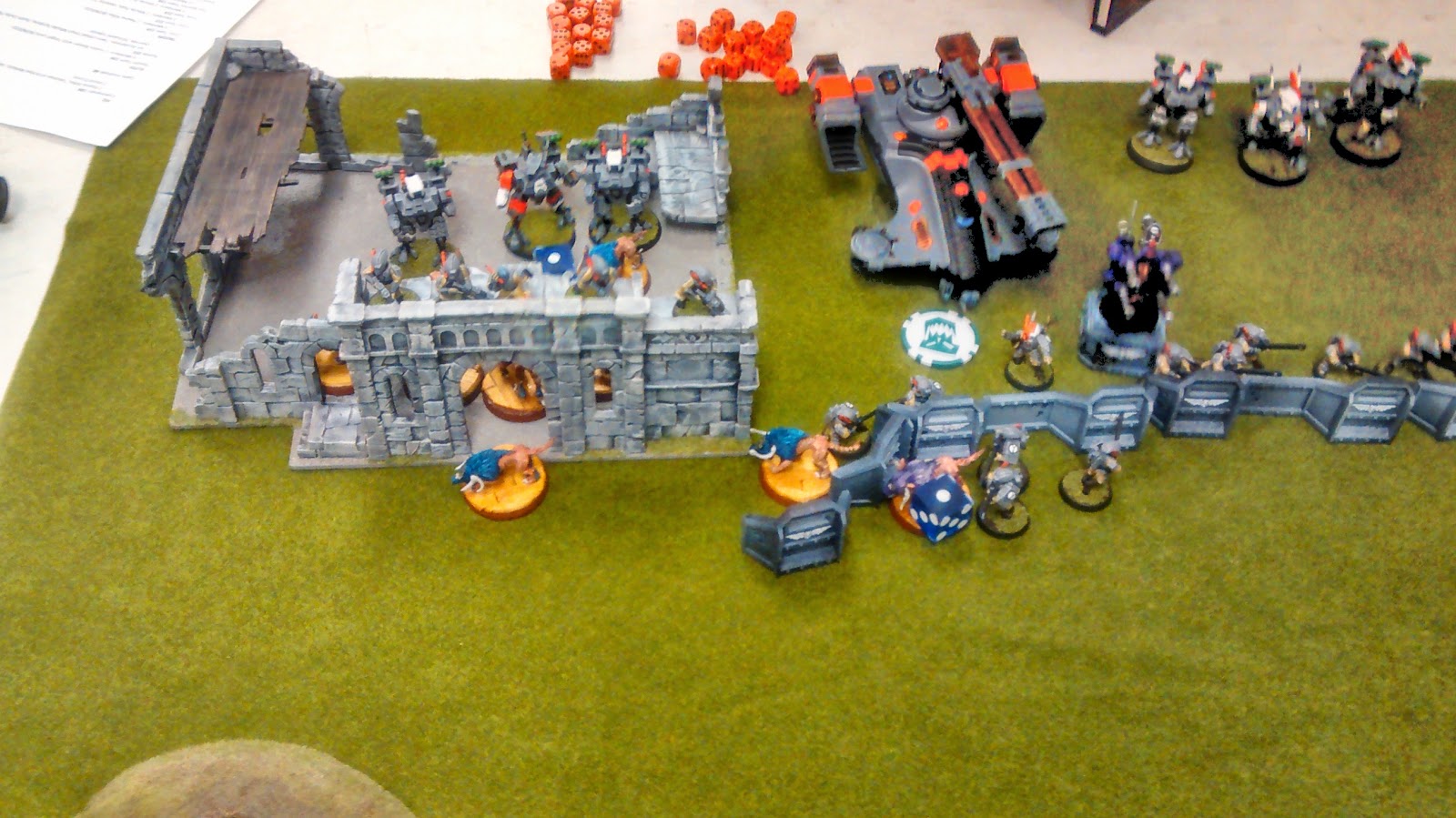 I am able to use the wall as cover for my purple hounds on the charge - I  eat the entire army worth of overwatch on them, but 1 survives with 1 wound.  I also rolled a 4 on the Warp Storm here so I am sitting on 6+ saves!  I make a multiassault into the Fire Warriors, Pathfinders and Missile Suits.  I snag First Blood here.

I sweep all three units in the combat and consolidate into the ruins. His firepower is much diminished and now I can get 4+ cover saves. 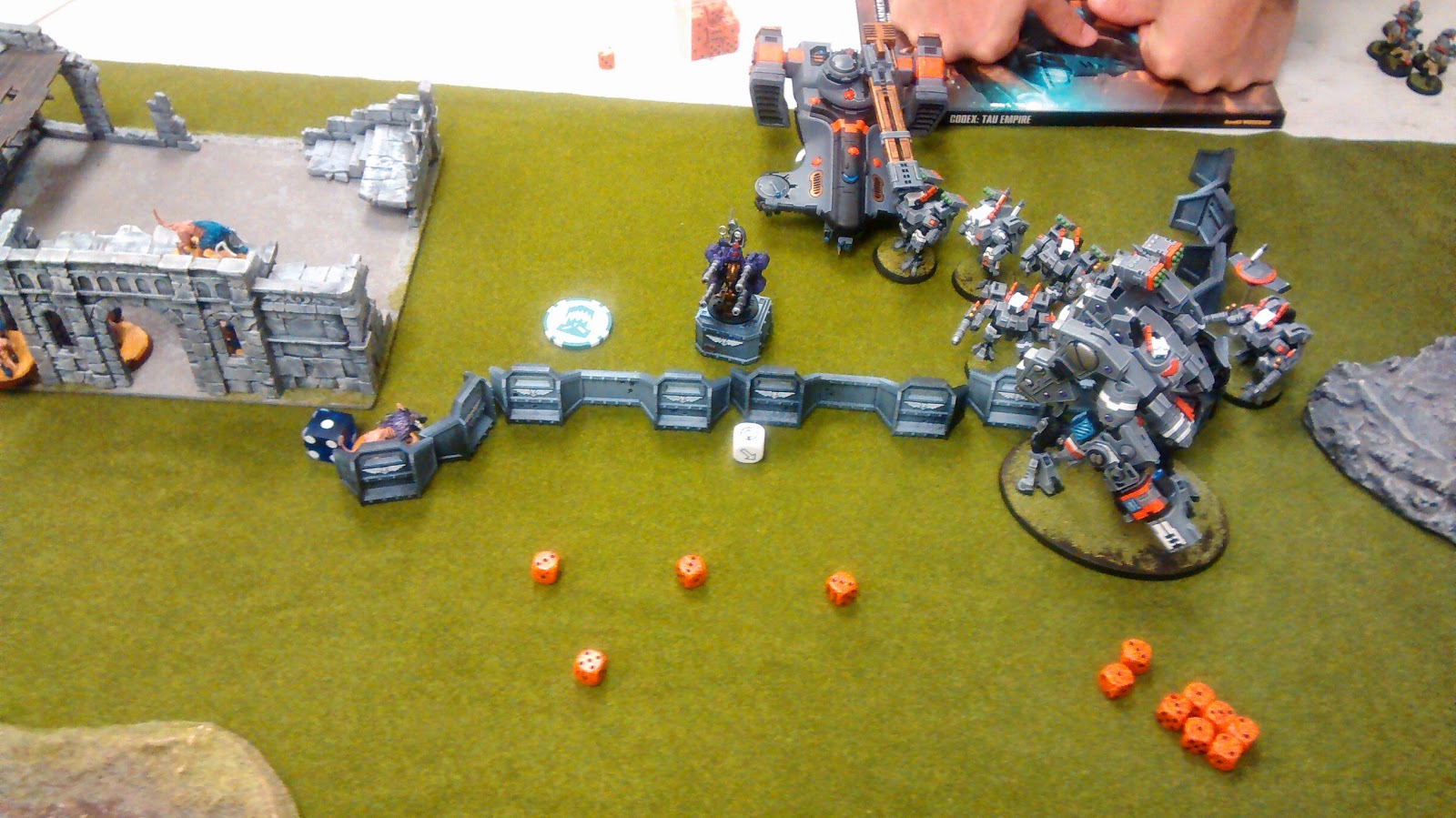 I get 3x Helbrutes and Deep Strike aggressively - not to mention snagging a Grinder.  I mishap 1 Helbrute into reserves.  Seriously, my Deep Strikes are all over the place this game.  The units as they land are all FAR closer than I originally intended. 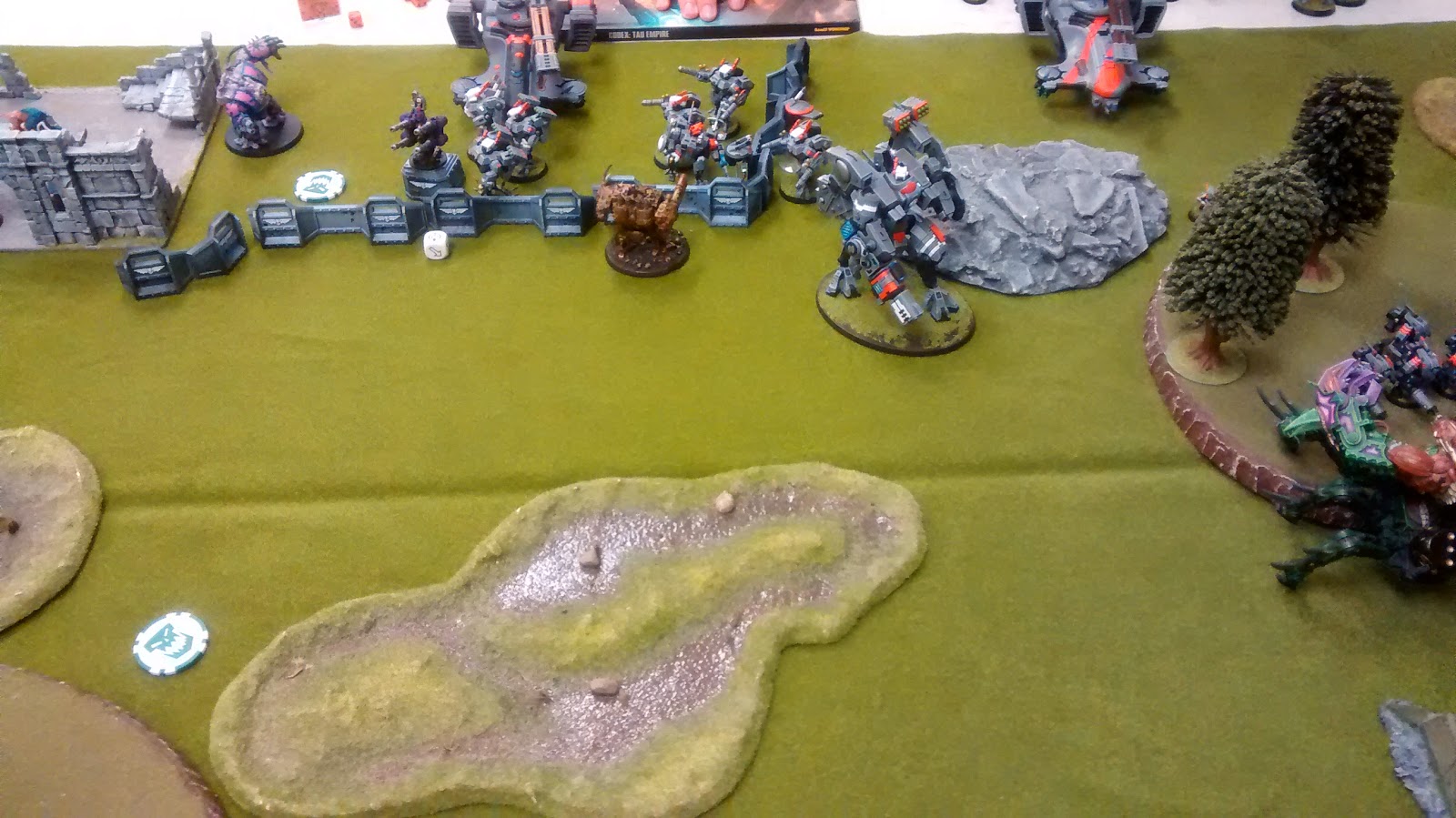 I also get the Keeper of Secrets, who runs to his current position and I move in with the Lord of Change. 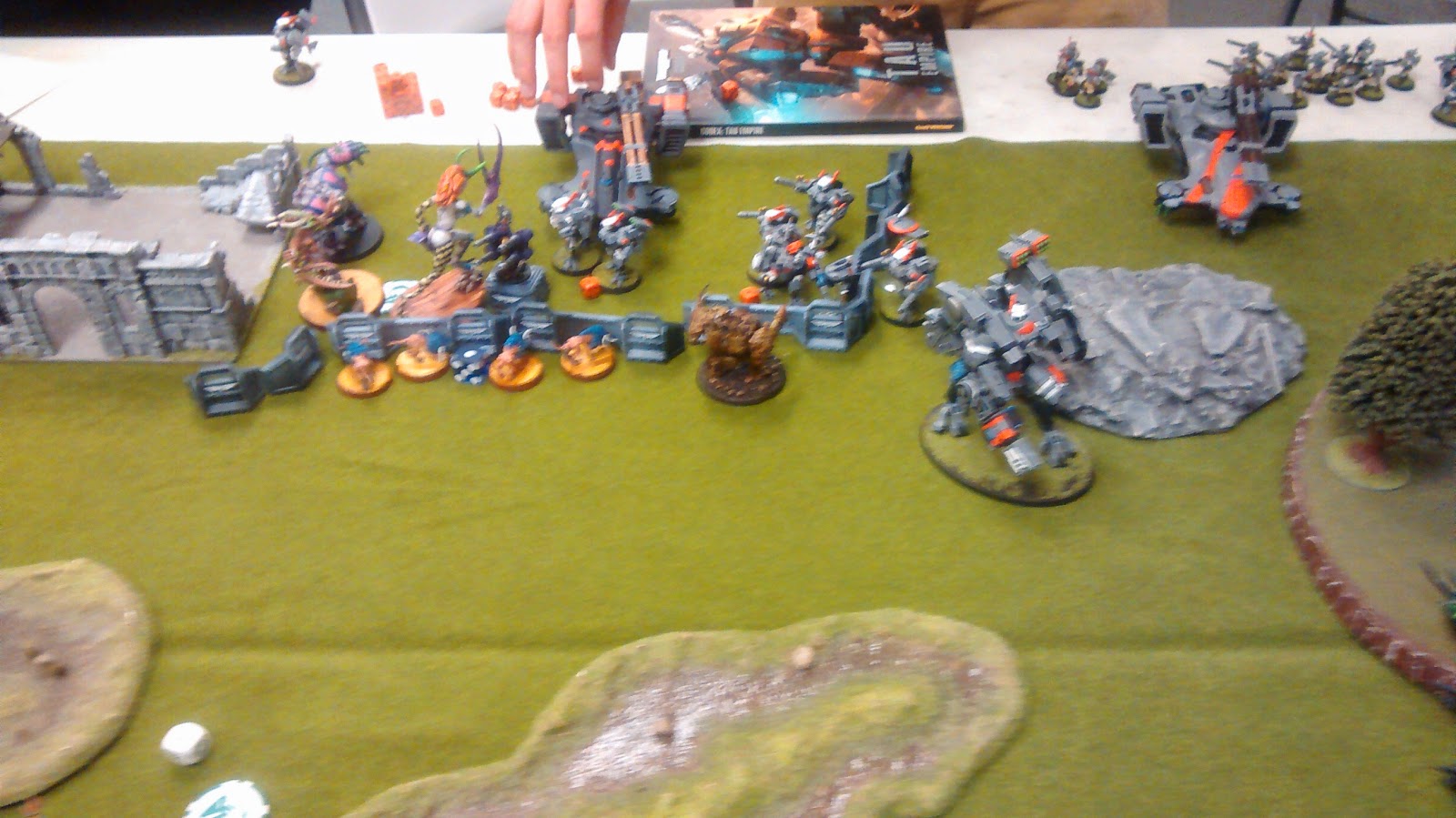 Hounds get the Grimoire and I assault into the Suits, plus take a shot at Longstrike who annoyingly survives.

Hounds take down a Misfortuned Riptide along witht he Keeper.  Lord of Change goes to town on some more suits and eventually hunts down the Commander in conjunction with the Keeper.  Back at home.. 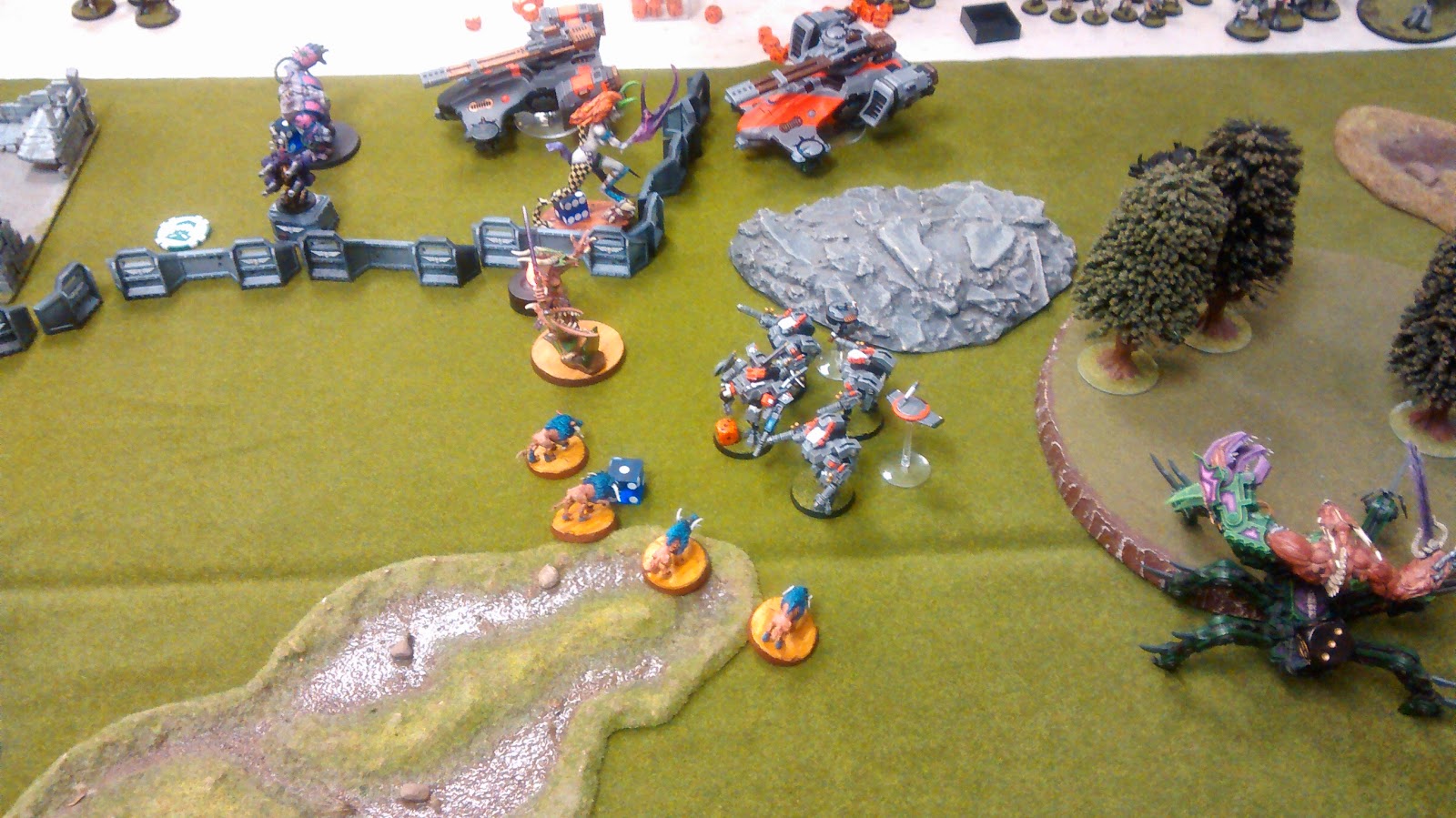 Plaguebearers get taken out by Kroot in combat!  Good rolling means I lose more than I should and Instability takes the rest.  I knock them out with another Grinder later and sit on an objective with some Deep Struck horrors. 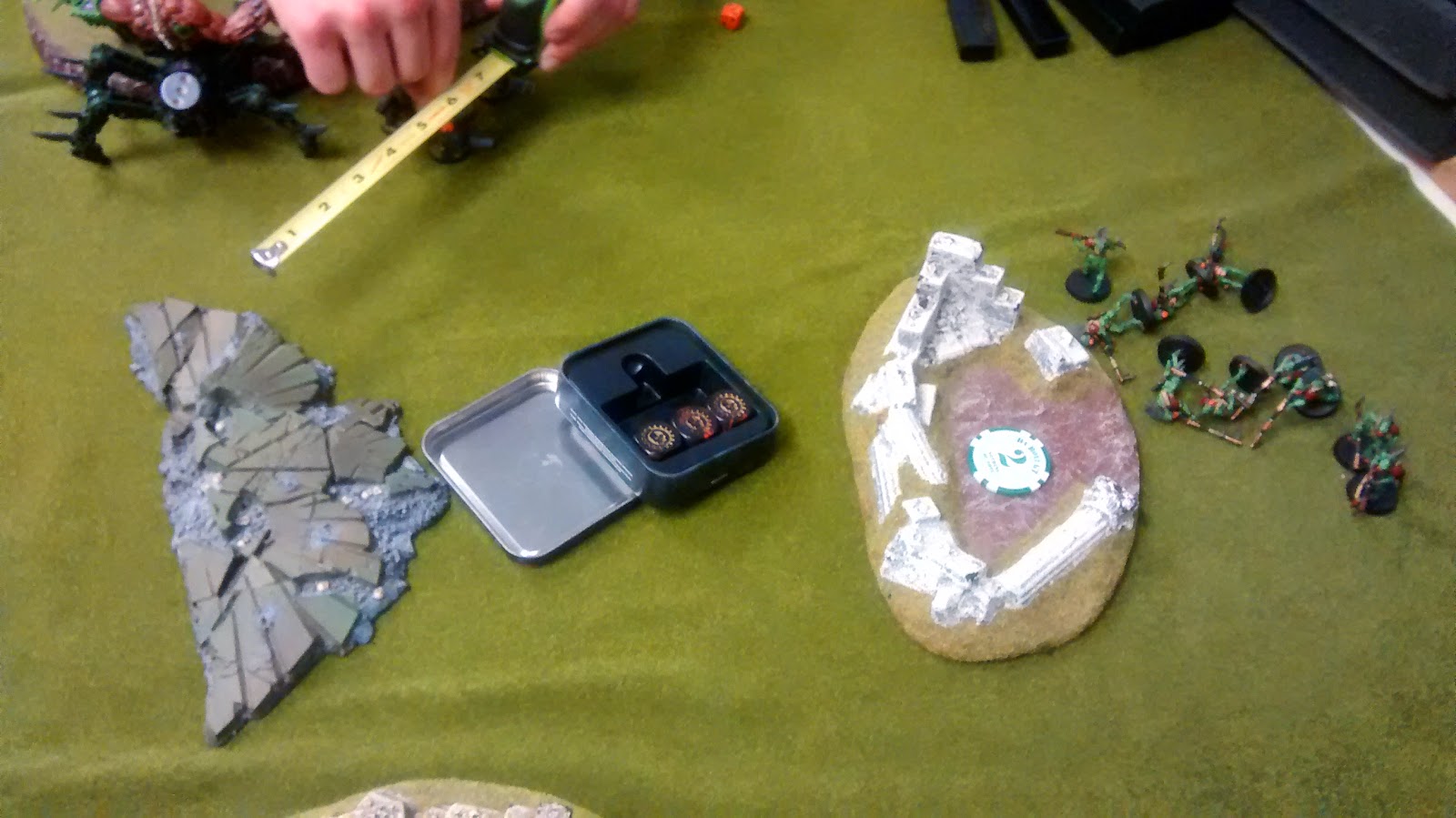 This was an intense game, but when the smoke clears the Tau have been wiped off the board.

Post Tournament Thoughts
I am glad I made some changes to include the Monstrous creatures.  They were interesting to play and I found with the hounds had a much longer survival time than I anticipated.  The armor I brought helped to divert some firepower away from them as well.  It is nice to see the Keeper do so well too - he is usually viewed as being inferior to the other Greater Daemons.  The changes to 7th edition and flyers I think makes him much more competitive though.

It has been a good edition for me, and the final score had me tied for second with Craig.  We had identical Battle Points and the same total for sportsmanship/painting.  Koszka managed to grab first, he is a single Battle Point ahead of me!  That First Blood I missed in game 1 made a difference.  As a rival - I think Koszka is currently my major competition on the local scene (or I am his maybe?).  We were neck in neck at Da Boyz for the first 4 rounds, we faced off at the December Invitational and I barely pulled a win and he knocked me out in the previous tournament in round 1.

Overall, I really enjoyed the tournament - thanks to ChrisP for covering my entry as an early Birthday gift.

With my prize, I am looking at more Pink Horrors, I think they are outstanding with the new edition and the chance for them to grab Daemonology - the powers in that discipline are really interesting and grabbing Flickering Fire for free is a nice bonus.  Somehow I keep getting drawn more to Tzeentch from Slaanesh - but I will stay true...at least from a painting perspective.
at 3:06 PM